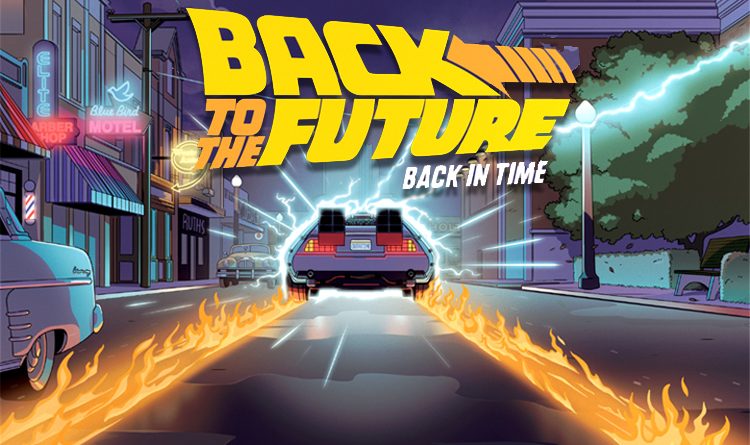 Back to the Future: Back in Time is a highly thematic, dice-driven co-op that places players back in 1955; trying to save the future from being erased.

Back to the Future is a classic film beloved by many, and numerous games have tried to capture the essence of the film in a fun and engaging way, but licensed games are always a tricky thing to pull off right. Well, Funko has joined in the fun with their take on this time travelling story by creating a challenging cooperative dice-chucking game about Marty’s desperate quest.  How does Back to the Future: Back in Time manage to capture the source’s essence?  And more importantly, will you be able to ensure the timeline remains intact, despite cursing Biff until the bitter end?  Let’s find out!

Jess
Seriously, I hate you Biff. 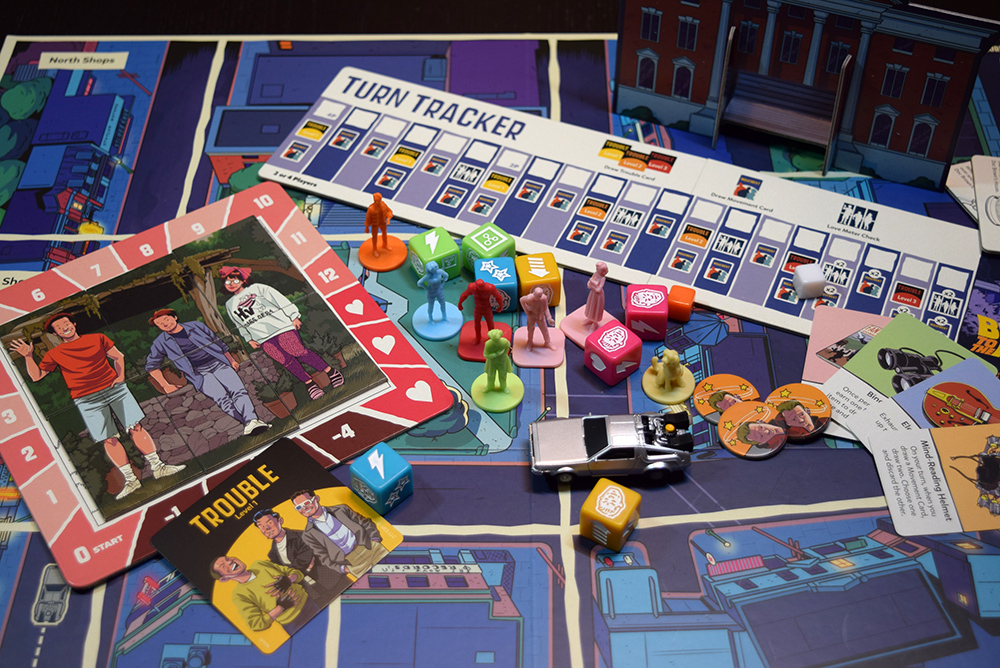 Back to the Future: Back in Time is set in the past, to the time when Doc Brown and Marty traveled back to 1955 and almost erased Marty’s existence. As characters from the film, you and your compatriots must try to collect up parts of the Delorean and get it to Main street while also managing to make Marty’s parents, George and Lorraine, fall in love before the clock strikes 10:04 PM.

Andrew
Look, it all makes sense if you’ve seen the movie. Mostly. Temporal paradoxes are tough!

Jess
Yeah, they sure can be, what with the possibility of erasing Marty from the timeline and all, but I’ve got to say, this all would be a heck of a lot easier if we didn’t have to deal with Biff.

Yes, the ever-present Biff and his gang of trouble-maker’s will be thorns in your side throughout the game, but we’ll need to take a closer look at how to play to see why. 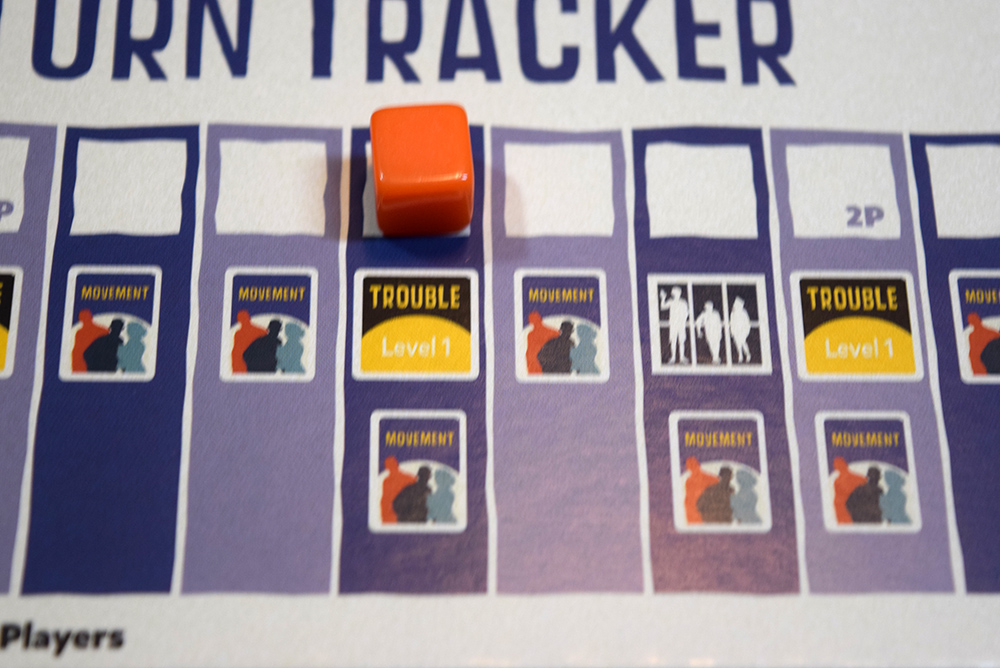 As a co-op game, Back to the Future: Back in Time needs the players to achieve their two goals before time runs out. The time tracker might seem to give you a lot of… time, but you’ll be surprised at how fast that little orange marker moves. At the beginning of each player’s turn, you must move up the turn tracker one space and resolve the actions on that space. Actions can include moving George, Lorraine, and Biff, flipping a trouble card, and checking the love meter. Any of these things can be bad news, so you want to accomplish as much as you can on your turn before events can mess with your hard work. 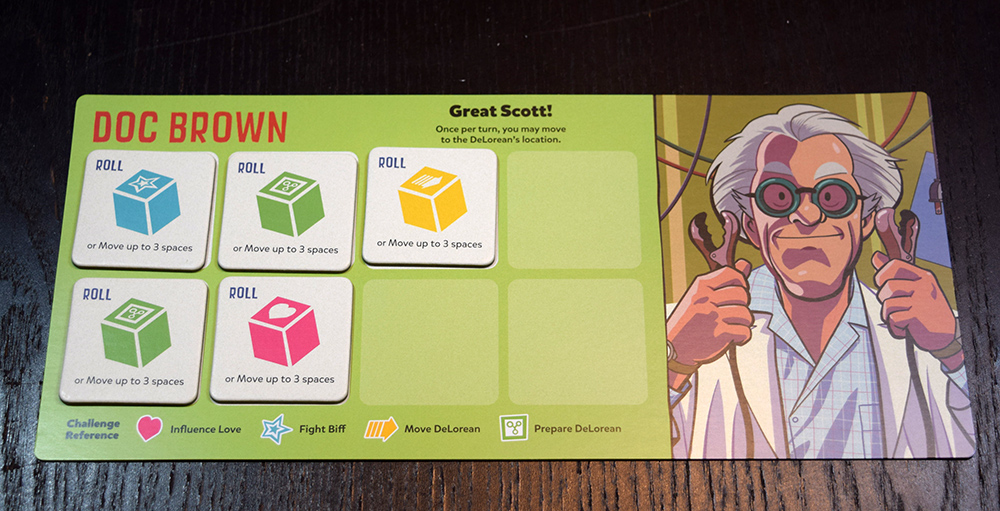 You’ll start the game with 5 action tokens on your player board. These tokens can either move your character or allow you to roll dice. Each die has symbols that match certain challenges , wild symbols, and the dreaded Biff symbols. The key is you never want to roll Biffs. Biffs are bad. Each Biff you roll gets locked and will move Biff towards George and Lorraine. Why does that matter? Well, it has to do with the love meter. 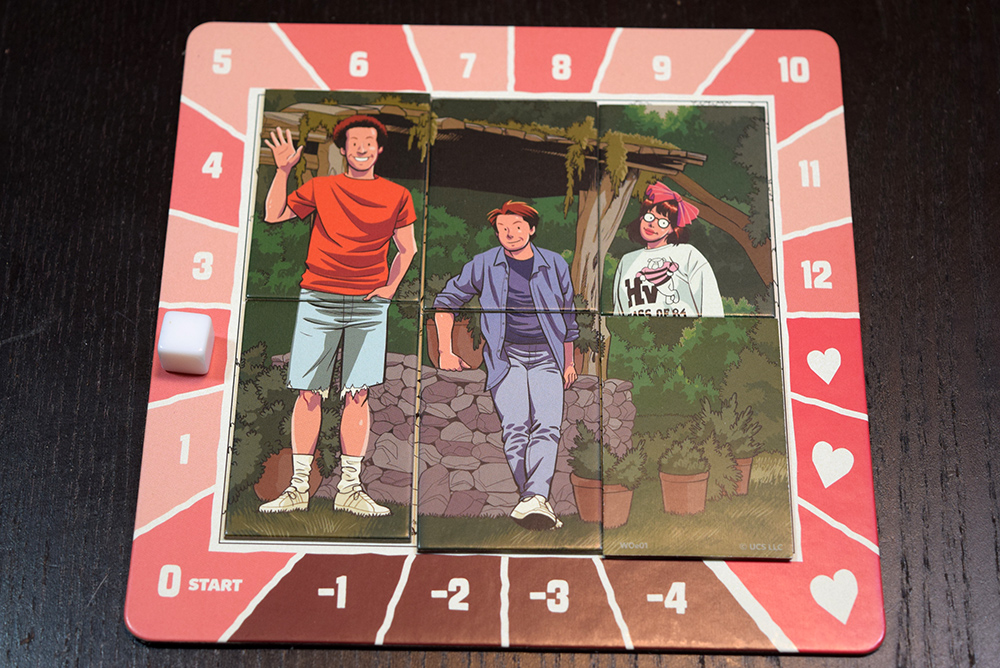 To get George and Lorraine to fall in love you must escort their character minis to any location and then roll hearts on the dice. For each heart you roll you can move one space up on the love meter. If you manage to get to one of the last 3 spaces, those crazy kids fall in love and Marty’s existence is ensured!

Unfortunately Biff has other ideas. Any time Biff is in the same location as George and Lorraine and you roll a Biff symbol, you’ll need to move the love marker backward on the meter. This can be disastrous because any time the turn tracker forces you to check the love meter and George and Lorraine  aren’t in love yet, a piece of the family photo will flip over; erasing some of Marty’s history. If you flip the last part of the photo over, Marty disappears and the game ends in a loss. 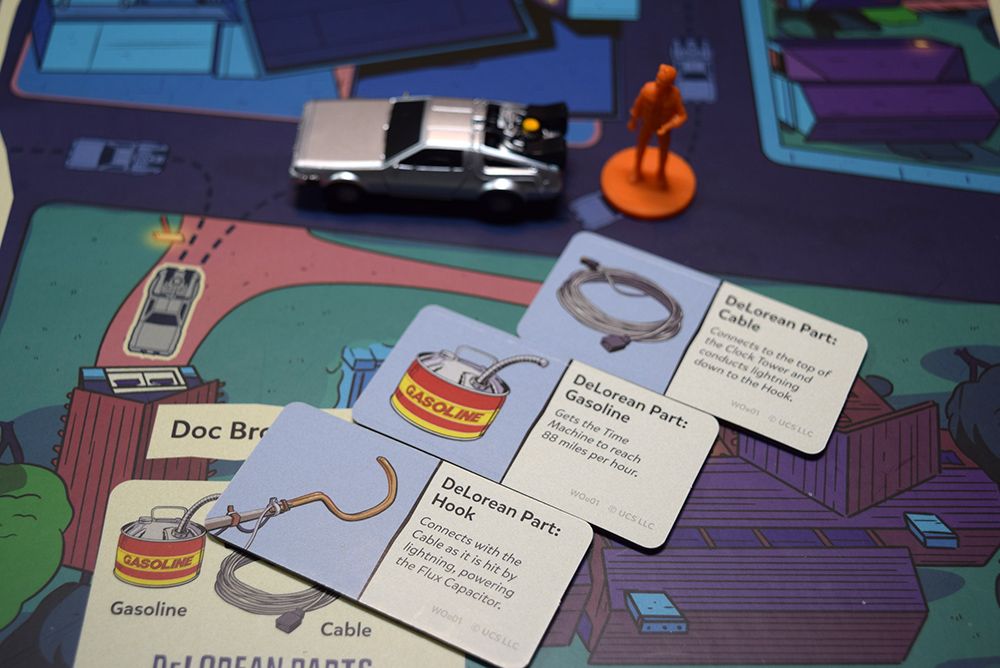 Ok so we’ve got the love, what about the Delorean?

Unfortunately, the Delorean isn’t finished. Scattered around the board are 3 parts you’ll need to fix the four-wheeled time machine. You’ll not only need to collect up these parts, but you’ll also need to push the Delorean mini to Doc Brown’s house before you can install them. 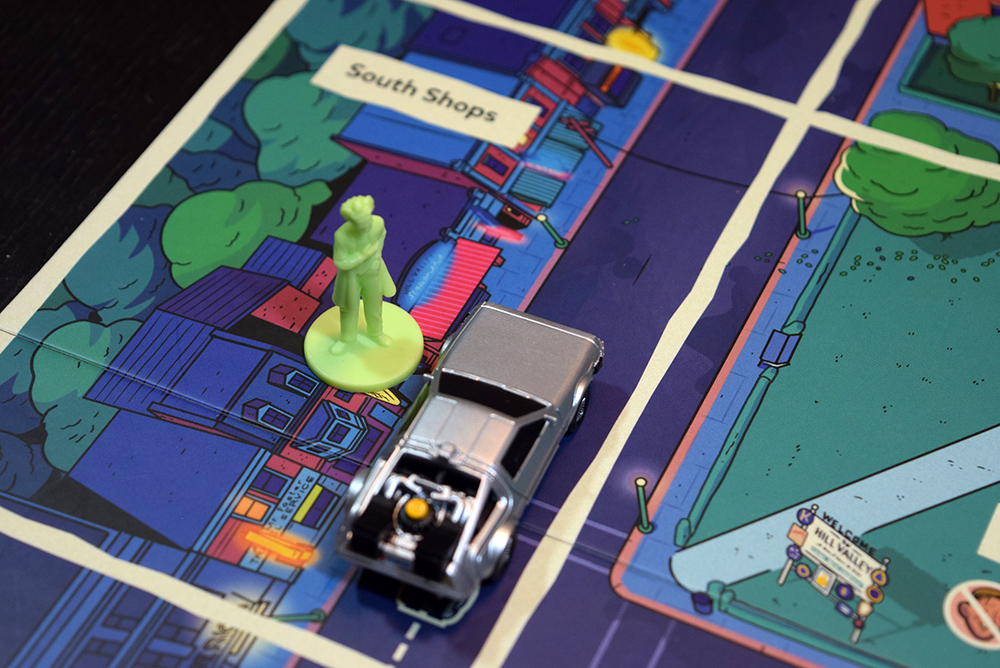 Pushing the Delorean means having a player in the same location as the car and rolling speed icons. As always, you don’t want to Biff things up here.

Jess
Biff has a habit of pushing the Delorean backwards which seems like a lot of work to do to just prove that you’re a jerk, Biff.

If you get the car to the house and install the components, you will again, have to push the car, this time to main street. Hopefully Biff minds his own business, because the trek to Main street is a long one and you’ll need a lot of good rolls to succeed.

Andrew
Argh!  Can’t we do anything about this meathead?

Jess
Sure thing! We can serve him up a knuckle sandwich.

Yes, if Biff gets on your nerves, you can always challenge him. Move to his location and roll the fight symbols to knock Biff down and daze him.  He’ll eventually get back up, but he can’t make any trouble until he’s standing.  On the other hand, turns you use fighting Biff means time you aren’t spending fixing the car or hooking up Marty’s parents.

Andrew
Which, again, is a weird sentence out of context. Actually, it was pretty weird in context, too. Look, the bottom line is those two crazy kids need to hook up and you’ve got to make sure it happens! 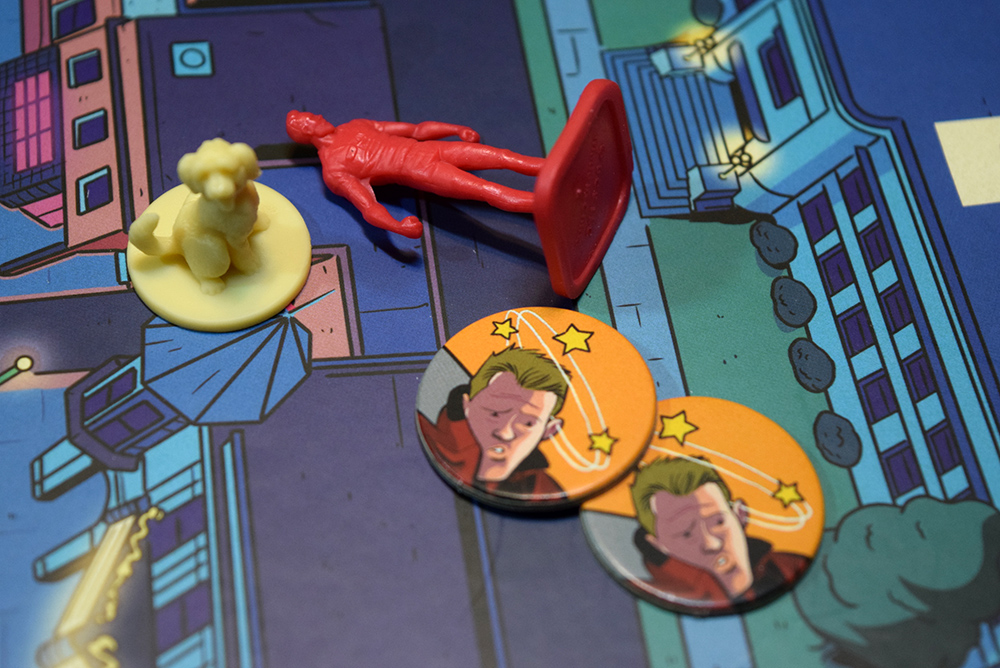 You’ll certainly be very busy with all of these activities, but lets not forget Biff’s gang. On some turns, they’ll show up and cause some trouble. If you don’t deal with them, the effects they have on the game can be disastrous. 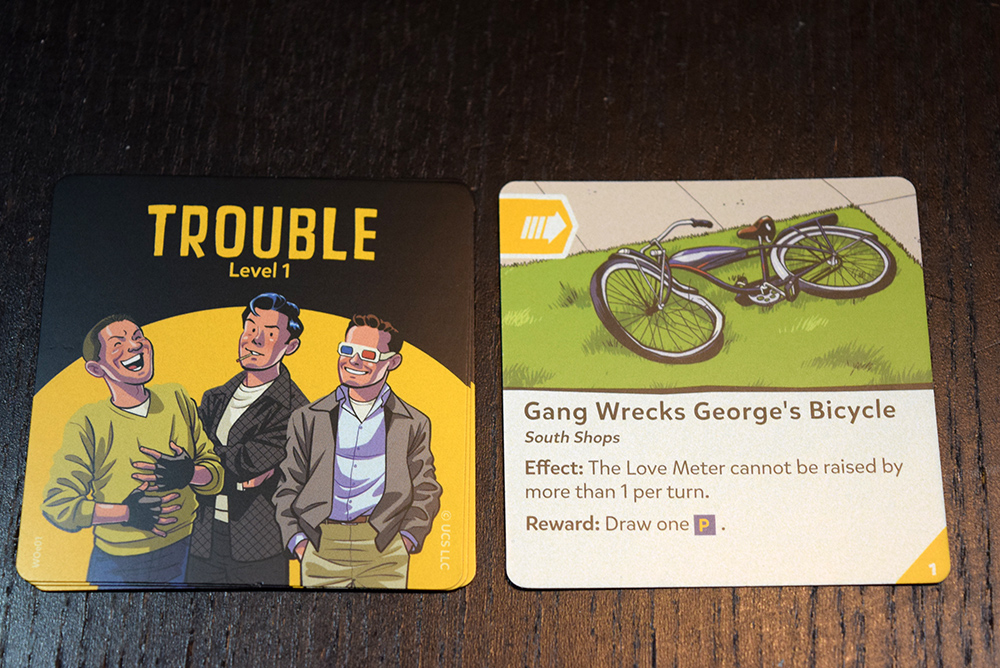 If you want to add one more thing to the ever growing pile of actions to take, you can deal with the Opportunity events. There will always be 3 on the board and fulfilling them will grant you extra powers which can be real game changers, but as always they take time and that’s just it.

Everything in this game takes time and do you not have a lot of it.

This is compounded by the fact that everything you do is based on the randomness of dice rolls. The game will give you some dice mitigating powers as you play, but if you’re rolling poorly you’re in a world of trouble. As the game marches inevitably towards 10:04, Biff becomes a herald of the end times. Each Biff rolled is another drop of dread in your ever filling bucket of despair and yet your triumph will be all the sweeter if you manage to actually pull off the tremendous feat of saving the future. 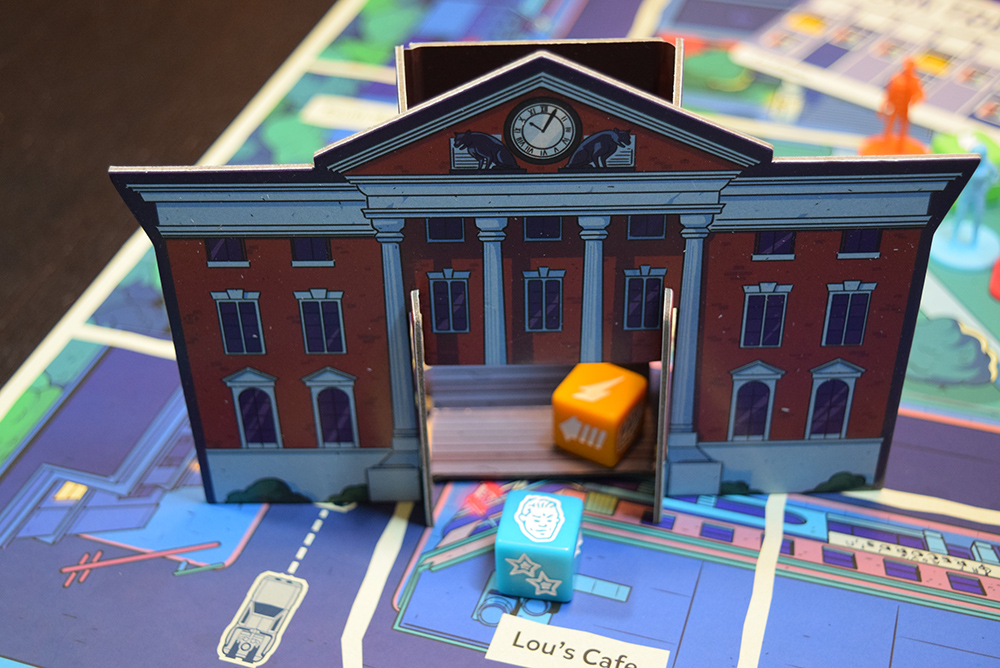 Back to the Future: Back in Time can be hard. You’ll never feel like you have enough turns and rolls are moments of supreme tension as you watch the dice pour out of the clock tower to prayers of “Please don’t Biff. Please don’t Biff.” That said, the game is a lot of fun and so well produced.

Jess
I particularly love the game’s comic book style art. It lends the game a light-heartedness that it needs to keep your hopes up while Biff dashes your plans to pieces. 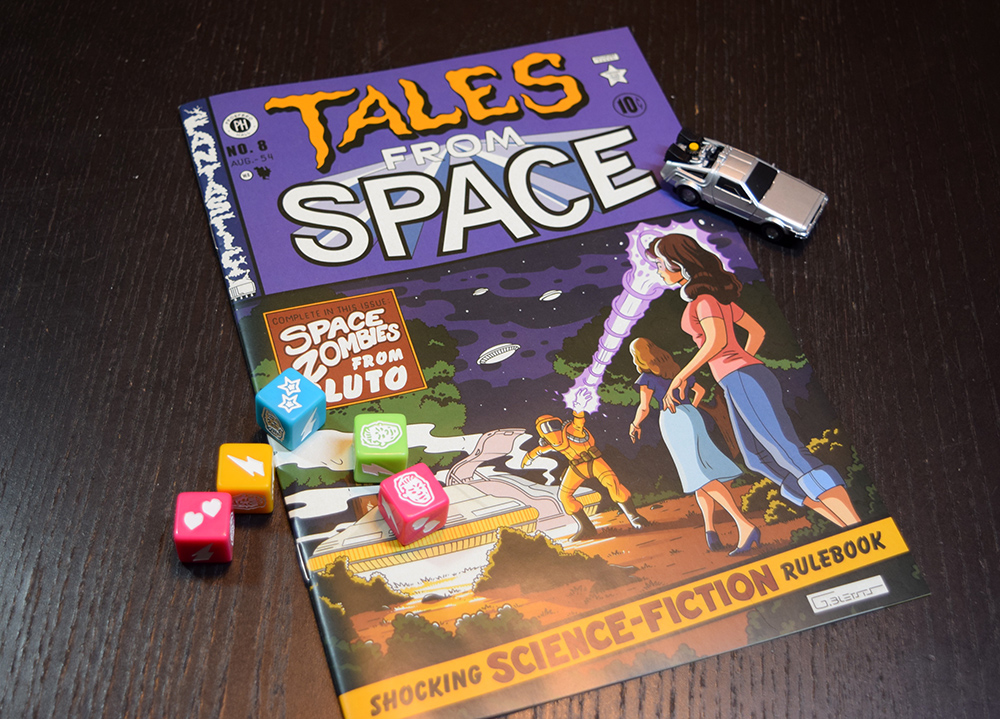 I have some mixed feeling about Back to the Future: Back in Time. I like how well it captures the feel of the movie, the production is fantastic, and the gameplay is fun, but the randomness of the dice can make your efforts feel Sisyphean. You’ll have a great turn, speeding the Delorean down the streets of Hill Valley and matchmaking the heck out of George and Lorraine, only to have the next turn undo everything you had accomplished. It can feel frustrating and unfair, but the game’s fickleness means that while the gameplay always remains the same, the challenge will vary from play to play, keeping the game feeling fresh and making you want to beat it even more.

All in all, I recommend checking out Back to the Future: Back in Time if you’re looking for a tough, gorgeously-produced coop with a fun, nostalgic theme, especially if you are a fan of the films!