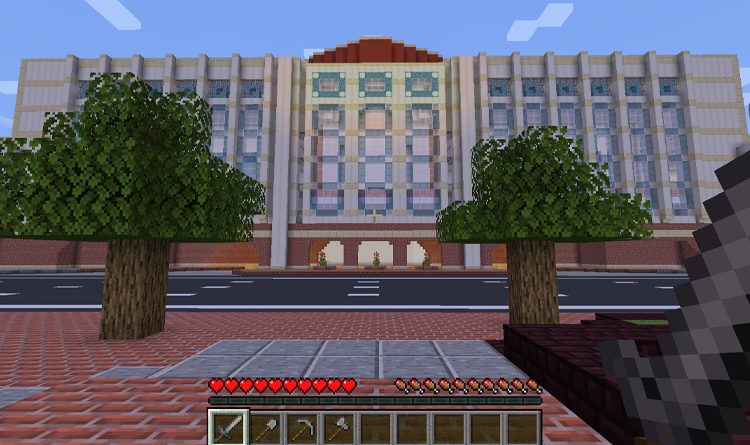 7 weeks ago, Katelyn laid the first block in her ambitious plan:

To build a Gen Con in Minecraft.

Her dream was to run a server that could emulate the Indianapolis Convention Center and I am awestruck at how much work she put into it.

First, she researched the building’s layout with floor plans and calculated out he exact dimensions it would be in game. According to her site “The convention center at its widest is 1333 feet and longest is 964 feet. Each block in Minecraft is 3 feet, so ICC alone will be 444 x 321.” That’s a lot of blocks!

Jess
And in researching this article, I learned the satisfying fact that the women’s restrooms at ICC are in fact larger than the men’s!

As Katelyn planned out the space, she accounted for adding in minigames to entertain guests and, considering the build and the minigame design, she calculated the work out to take about 50 hours.

By day 3 the convention center was already beginning to take a recognizable shape.

The picture above shows a small portion of the convention center, but does not display the epic scale that Katelyn was working on. This gif gives a clearer idea of the huge task she was tackling:

While she got the official thumbs up from Gen Con about the project, by day 8 she was feeling a bit disappointed with her progress. That did not sway Katelyn though. Like the champ she is, she plowed through the exterior design and went on to replicating the interior. Modeling rooms to be the exact dimensions of the real space and closely matching the color scheme, the convention was beginning to take shape.

Towards the end of the build Katelyn brought on volunteers who helped put the finishing touches on the design. It is truly epic the amount of creativity and work that she put into building a virtual Gen Con space.  As longtime veterans of the Con, I found myself familiar with the layout of the main convention hall, from the booths to the free-play area, and the amount of jaw-dropping detail that went into this project left me giddy – and perhaps a little sad – with memories of our trips there.  Katelyn’s recreation is so good that it actually got me wistfully nostalgic.

You can explore the convention for yourself by heading to the minecraft server: play.gcmine.net and while you’re there make sure to visit Katelyn’s Discord and drop her (aktuarie) a note to get a tour of the space. She has included some things to see:

As well as events to check out:

I cannot overstate how impressed I am with Katelyn’s work. Andrew and I visited the space and were completely blown away. You can see pics of our explorations below.

Other visitors we ran into were having fun exploring and collecting badges. If you have Minecraft make sure to go see it for yourself. You can get all that nostalgic convention feel and see the blocky masterpiece in all its glory. You can learn more about Minecraft Gen Con at gcmine.net