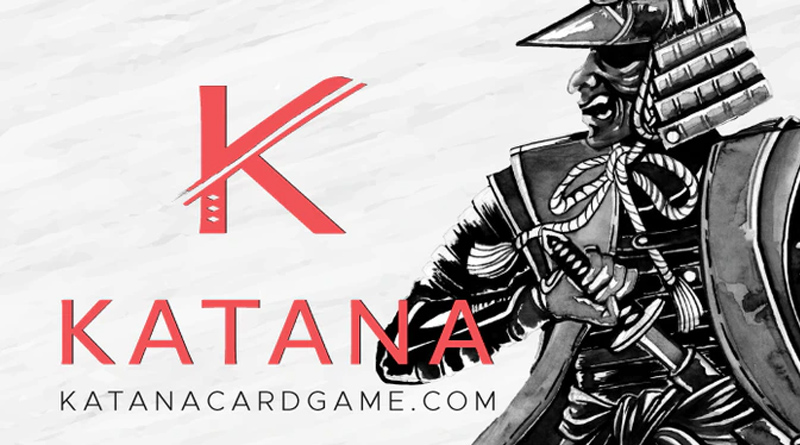 Katana is a austerely-beautiful card game for 2, pitting rival samurai in an abstract battle defined by strikes and counter-strikes.  But mastery of the blade alone won't suffice - powerful Kami spirits can tip the balance in favor of the victor.

The title of this article might make you think that Gameosity has finally reached the logical conclusion of all board game review sites – assessing the value of traditional Japanese melee weapons.  Not so!  In this case, Katana is a 2-player head-to-head card game, where rival warriors will draw deadly steel and summon the favor of powerful spirits in this abstract battle of honor!

Jess
Wait, we’re not reviewing swords now? But we own so many!

Andrew
That’s absolutely true, yeah, but let’s stick with the games for the moment, and discuss Bladeosity later.

Thanks to Tracy Alan, the designer of Katana, for providing a copy for our consideration and potential review

Katana is a game of simple mechanics.  Each turn, you will manage your hand of cards to attack your opponent, fighting to break through their armor and defeat them before they can manage to do the same to you.  Your cards can be used in several different ways, and deciding when to commit a card to an attack versus hold it back for defense or to use to assume a battle stance is at the heart of Katana and what makes it an engaging, streamlined experience.

When one player attacks the other, they will commit an attack card.  The defending player has the opportunity to play a card to protect themselves, and if the attacking player manages to exceed the value of the defending card, then the difference in damage is dealt.  However, if a player plays cards in their defense, then the attacker has the option of pressing their assault, playing additional cards to continue their attack.  It is only when a player does not play a defensive card (or when an attacker chooses to stop) that the attack ends.

Andrew
At first that might seem a little unfair – that if you defend yourself, the attacker gets to come at you again. But I like how it mimics the idea that the players get locked in combat, with the defending player choosing to stay in range of attacks in order to block them if possible.

Jess
It also places the attacker at a card disadvantage, since you only re-draw your hand at the beginning of your turn. So the cards you use to attack aren’t going to be there to help defend you when your opponent starts their own attack. It’s a neat way of representing the dangers of an over-extended, aggressive fighting style.

Battles in Katana are quick exchanges of cards – attack, block, counter-attack, counter-block, until blood is drawn or the attacker relents.  This simple combat is made more interesting as players assume different stances, which are played face-down until they are revealed and their effects are applied.  Attacking an opponent who is ready to defend can render your assault meaningless or even turned back upon you…or that face-down stance card might just be preparatory for their next turn’s attack.  It adds a little mind game that comes as a welcome addition to Katana’s gameplay.

Successfully applied damage first shatters your opponent’s armor and then their hit points.  These are represented by stacks of cards and are arranged based on what guiding kami each player drew at the beginning of the game.

Kami do more than simply dictate the shape of each player’s hit point cards.  They impart both passive and active abilities that players can use to turn the battle in their favor.  And in cases of dire need (or perfect opportunity, players can even choose to sacrifice their kami to perform a kamikaze attack, invoking their guiding spirit in a powerful hit that leaves the player delivering it in a compromised state, at least until they summon another kami to watch over them.

Players can attack each other’s kami by damaging their opponent’s spirit with pollute cards.  These impair the opposing kami’s abilities, and enough pollution of the spirit can even banish a kami outright.  Players can spend cards to purify themselves, but that action burns up cards and takes precious turns, leaving them open to attack.  Battle continues until one player manages to best their opponent and deplete all their health.

Andrew
So, I’ve got to say, I really like Katana. I know it’s a head-to-head battle game and that’s never going to be your favorite, but I think it’s got such a solid mechanical core and such absolutely beautiful presentation.

Jess
I agree with you on the aesthetics, they’re incredibly clean and appealing. As far as the gameplay goes, I agree that it had a good rhythmic quality. It’s just not my favorite style of game, that sort of head-to-head battle – Katana is all about grinding your opponent down, cut by cut, and it’s great if that’s your thing.

Andrew
Which is ironic, considering what a scrapper you are in a real fight.

And that’s just what Katana is – it’s a tight card duel that has enough randomness to keep things interesting while still being strategic in how you engage your opponent.  Knowing when to press the attack and when to hold back is key to the flow of this game, which is percussive and quick.  Your battle won’t be a long one, but that works incredibly well here, as Katana is the perfect game to break out when you have a few minutes to enjoy something that isn’t needlessly complex but is consistently engaging.  If you’re interested in a beautiful, portable, tight card battle for two, we highly suggest checking out Katana.

Katana can be ordered directly from the creator