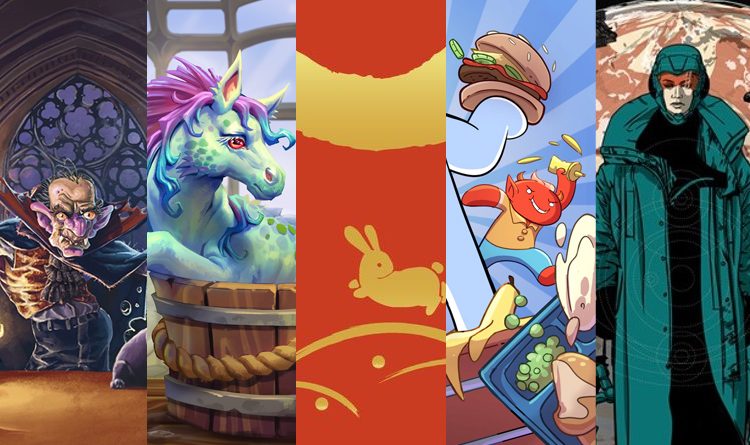 Jess
Oh my word. Today has been a real doozy. Let’s jump into the Kickstarters and forget all our troubles for a few minutes.

Count Dracula has built himself a bustling Transylvanian tourism business to bring in fresh blood and is ready to announce his retire. As his family members, the players must prove they are worthy to become the next Count by doing their part to improve the business and bring the Count some tasty snacks. Dining with Dracula is a worker placement and time management game where players share their workers as well as their time. Each action takes an amount of time from a shared clock. Once it hits midnight, the round is over, and plays must vie for the the chance to brag about their achievements to their vampiric master and convert favor tokens to victory points. 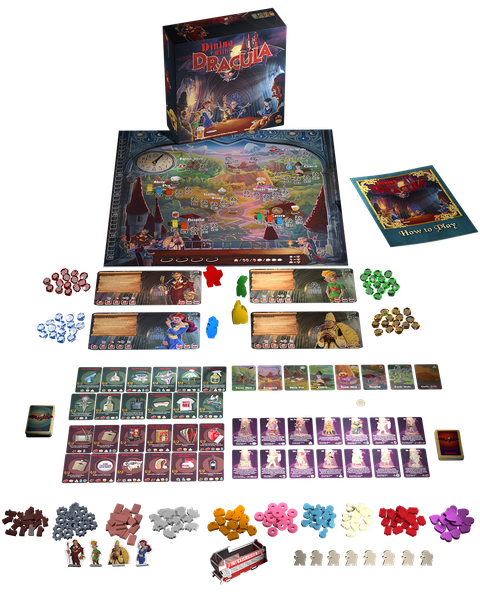 I like the dark, tongue-in-cheek humor of the theme and the shared workers/time sounds really interesting. The fact that you can use your worker to take control of a tourist which will give you extra actions and the possibility to power up your move sounds really fun. The game only has 4 rounds and since you are sharing a timer the strategy is all about maximizing the effectiveness of each action. Learn more about Dining with Dracula here on Kickstarter.

In another game of trying to win over a master with a test of your skills, Familiar Alchemy is a semi-cooperative game about growing magical plants and brewing wonderful potions. Grand Alchemist, Beira Winter, has invited the players to compete in a potion brewing contest with the winner earning their place as her apprentice. The game begins with players drafting plants into their garden and then tending those plants to grow them. With the aid of powerful familiars, the players will harvest their plants and use the reagents as ingredients for communal potions. You earn points based on how well you looked after your garden as well as the the number and type of ingredients you added to each potion. The player with the most points wins. 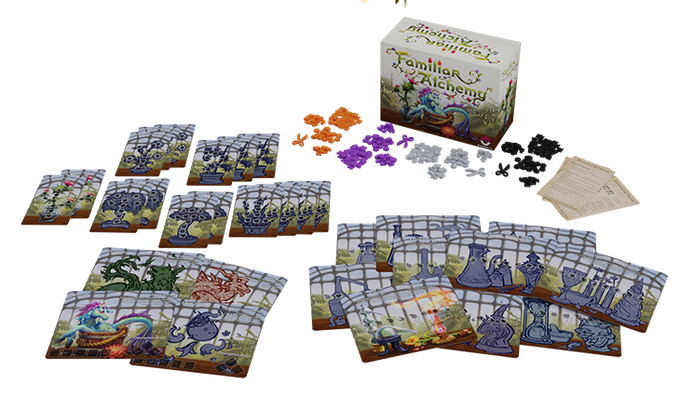 I like that the semi-cooperative aspect of the game. It means that you don’t have to provide every ingredient for a potion yourself and instead can focus on growing the highest quality plants of your choice that you can.  While brewing is important, the real focus of the game seems to be the gardening aspect. The addition of familiars is great as they give you the opportunity to Transmute ingredients by mixing specific combinations of ingredients to get powerful abilities. Visit the Familiar Alchemy Kickstarter here to learn more.

In Izayoi, everyone is playing apprentices looking to collect wakomono (Japanese accessories), but they never collect more than their master, because no master likes to be shown up by their underling. Each player gets 1 Master card which is kept hidden during the game. It shows which of the other players are your master. If you score more points than your master, you are out of the game, so it is important to always balance your score against theirs. Each turn wakomono will be put up on offer and players will vote for who will receive the accessory. 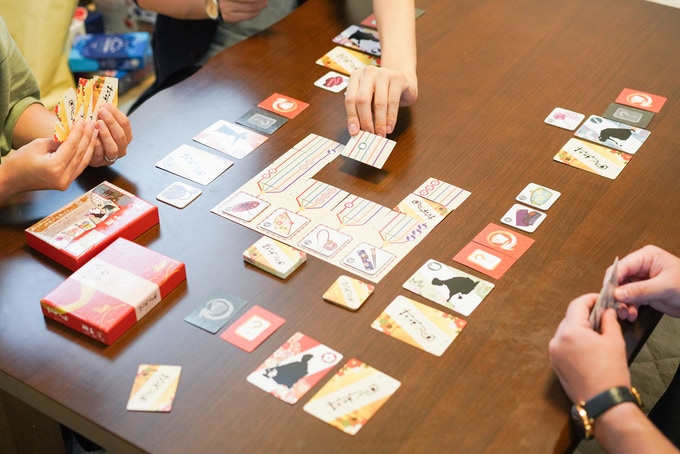 Izayoi looks like a very clever hand-management/voting game with a beautiful aesthetic, designed to not only be fun, but to also offer insight into wakomono and Japanese culture. Learn more about Izayoi here on Kickstarter.

Based in the comic strip world “The Odd 1s Out”, Cafe Chaos is a take-that party game about a school cafeteria food fight. Each player gets a character with a unique ability and then gathers up food to use as ammunition. You can combine bonus cards with food to create extra powerful attacks and use actions to dodge attacks. When food hits a player it inflicts Splat points and once anyone reaches 10 Splat points the game ends and the player with the least, wins. 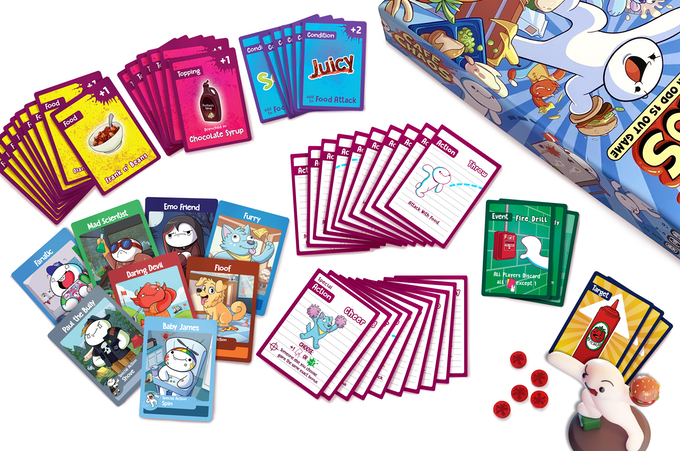 The game looks wacky and chaotically fun. The Kickstarter offers exclusive card packs that include characters and designs from other artists on the web as well as expansions to add more food to the fray. Check out Cafe Chaos on Kickstarter here to find out more.

SYNDICATE: An Interplanetary Conquest Board Game

SYNDICATE is a 4x style game where players are in control of criminal syndicates; looking to expand their influence without garining the attention of the authoritarian regime known as  the Sovereign. You’ll have 6 to 8 rounds to build up you criminal empire by building bases on planets, sending your ships to battle opponents, and completing missions which will gain you valuable resources and technologies. As you play you’ll be able to level up your syndicate and negotiate with your opponents for help on missions, trading resources, and forming alliances. You must be wary though, for if you fail too many missions or get into too many fights the Sovereign will retaliate. 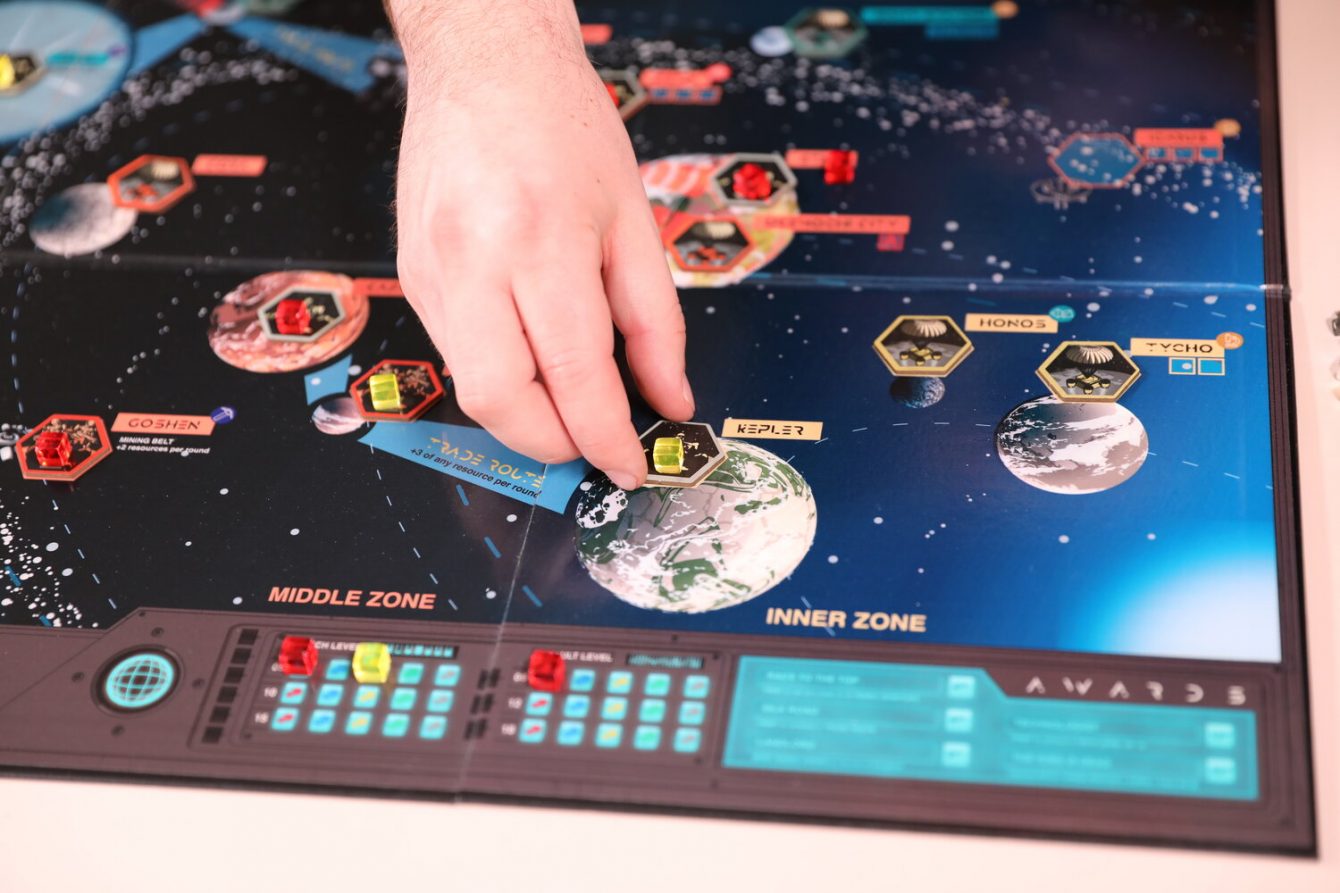 This Kickstarter is a redux of the original SYNDICATE and according to they have incorporated the feedback from their original backers to update the game with new minis, a single player mode, a 3D player mat, and added a new group pledge level. I like the art style of the game and I like that you can customize your strategy by choosing what you will level up in. You can explore SYNDICATE on Kickstarter here.