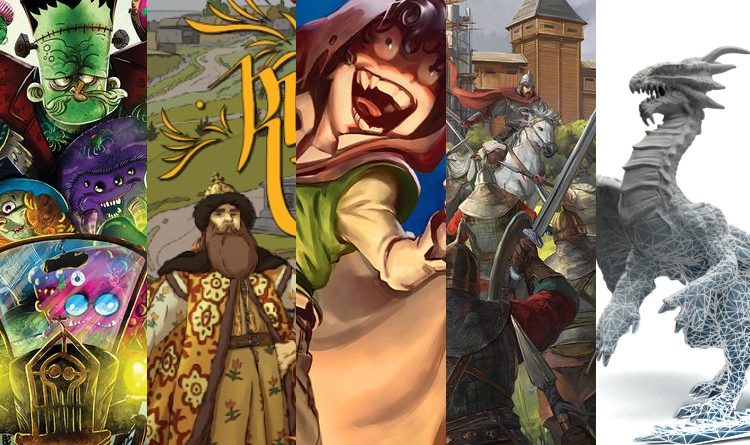 Jess
Each week I scour Kickstarter for projects I think look fun and exciting. Join me in checking out these projects looking to get published.

Monsters on Board is a dice-drafting game where players are monsters looking to throw an epic party. To do so they will need to collect Spook Juice by scaring the humans of Startleton. Each round players will draft Monster Lords (dice) and use them to take actions. Higher value dice will provide more spook juice, but lower level dice will get more powerful actions. Then, based on their chosen dice, players will move their Grunt Monsters around the board scaring humans and gaining you extra actions, and advance on the Spider Jack track which eventually trigger scoring. 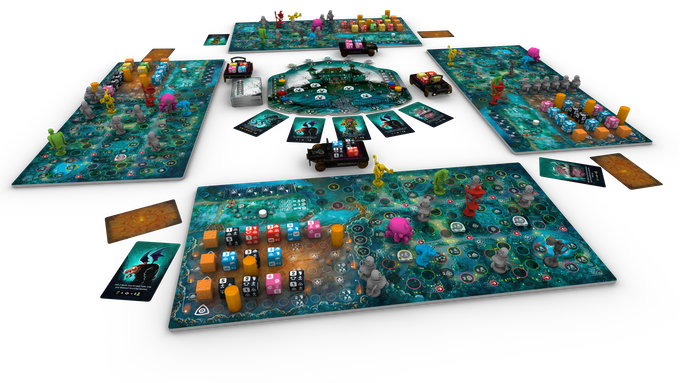 Monsters on Board, by itself looks like a fun time and I love the component design, but the Kickstarter is also offering an expansion box which adds thee modules to the game that add whole new mechanics. The Dinner module has you managing a dinner party, collecting food from town and serving it to your picky guests. The Game module tasks you with reassembling Frankenstein’s monster bu collecting body parts. The Murder module makes it so one monster is targeted for elimination and you must search for clue as to which one it will be in order to save them. These extra modules sound like they completely change the focus of the game and add make it so that Monsters on Board can appeal to a variety of tastes. Learn more about monstrous party planning be heading over to the Monsters on Board Kickstarter here.

Ivan the Terrible is dead, but there’s no heir to the throne! Lie your way into his seat in Rus’; a secret identity/city building game. In Rus’ each player will be trying to earn the most Royalty points by the end of the game. To earn points you must build up your property board by taking actions using your cards or your secret character’s ability. You can always claim that you have a character and perform their associated action, but other players can accuse you of lying. If they do, you must reveal your character card. If you were truthful, you gain coins from your accuser and take your action, but if you were lying you must pay them and don’t get your action. After revealing and payment, the card is shuffled back into the deck and you get a new character. Once you have enough coins you can upgrade to the next class level. You can also spend coins on upgrading your town. The buildings you construct will give you extra coins each turn. Once a player has upgraded to the King card or reached 10 Royal points, the game ends and the player with the most Royal points wins. 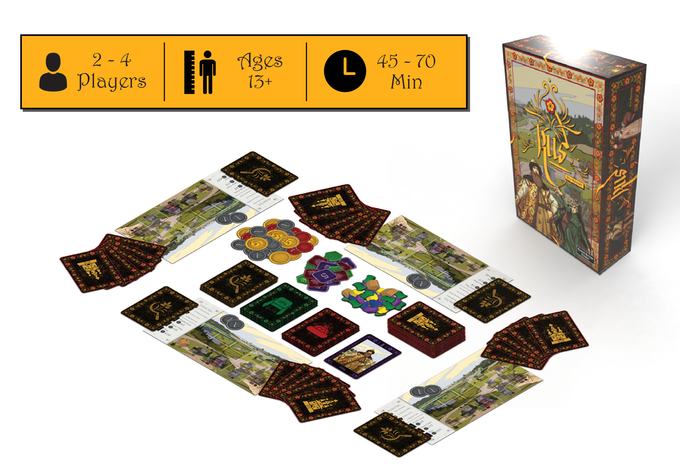 I like that this isn’t just a simple hidden role game. The engine building nature of it is really compelling and adds in a new way to suss out a player’s identity. Check out Rus’ on Kickstarter here to learn more.

GROWL is a semi-cooperative, hand-management game that pits humans and werewolves against each other. At the beginning of the game each player will get a card which will secretly reveal if they are a human or a werewolf. The Werewolves want to covert or kill all humans. The Humans want to survive 3 nights without becoming werewolves. On your turn you will publicly draw a card and then choose a player to give it to. Bite cards will turn a player into a werewolf if they accumulate 3, Charm cards cancel bites, Wounds are like bites except that they kill you, Salves cancel wounds. When A night card comes up all player pass a card to their left and right, shuffling their received cards before they look at them. After the third night, the werewolves reveal themselves and if any humans are still alive, the Human team wins. Otherwise, welcome to werewolf town. 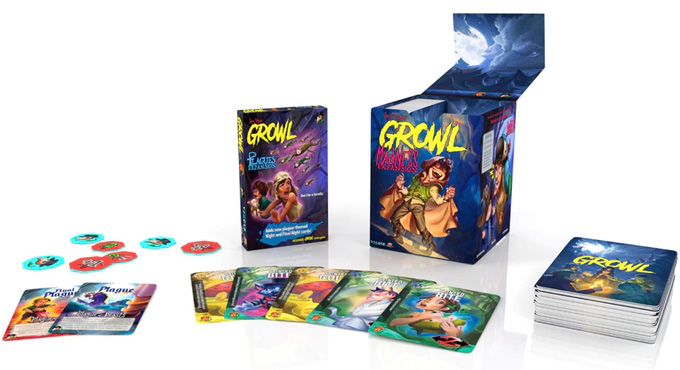 This Kickstarter not only lets you pick up a copy of GROWL, but also adds 2 new expansion packs to the mix: Madness and Plagues. Madness adds Tainted Bites are actions and Tainted Gold are triggers. If you have 1 of each in your hand you gain a madness and must do whatever the Bite card says when the Gold trigger is activated though certain things happening or words being said. Plagues, on the other hand, adds new Night cards, Spells (ongoing effect cards), and Heresy tokens. The tokens can be given face-down to other players. When a Plague Night card is revealed the tokens are flipped over revealing if they are spells, heresy icons, or modifiers. The player with the most heresy icons is dubbed the heretic and receive negative effects and/or more difficult win conditions. I’ve never had the chance to play GROWL, but it sounds like a really clever take on the Werewolf-style game. Instead of making baseless accusations against your friends, you are able to draw informed conclusions and manipulate the werewolf/human balance with clever use of the cards. The 2 new expansions look like they add new levels of difficulty for players who may have mastered the game. Nab yourself a copy of GROWL and its expansions here on Kickstarter.

Rurik: Dawn of Kiev is a realm building game set where players are rivals for the throne in 11th century Kievan Rus. The game uses a auction-programming mechanic where players use their advisors to bid on on actions. If you bid high you’ll get a stronger action but go later in the turn than a lower bid who will perform a weaker action quickly. Stone & Blade is an expansion that adds 3 new modules and new core content like leaders with asymmetrical starting rewards, more buildings, the ability to capture and ransom troops, and new ways to score points. The Kickstarter also includes updated rules for the solo mode of the game. 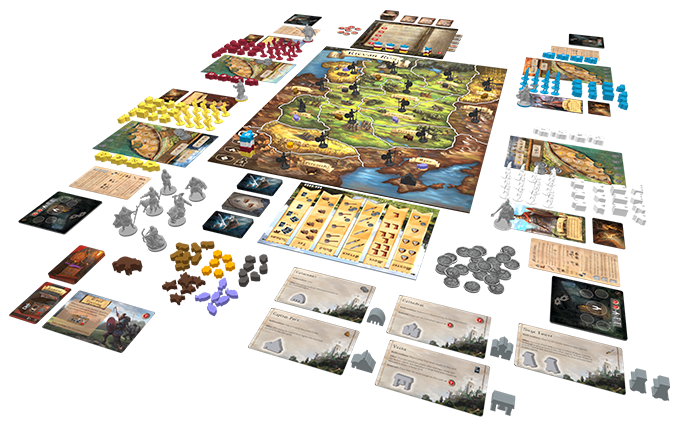 I’ve never had the chance to play Rurik: Dawn of Kiev, but its auction mechanic of sounds really intriguing and with these new expansions being release, now might just be the right time to check it out. If you are interested there is also an option to get deluxe components with metal coins, a neoprene playmat, and plastic honey cubes. Check out the Rurik: Stone & Blade (Reprint & Expansion) on Kickstarter here.

I’ve been playing around with customizable minis lately. There are a bunch of sites that now offer the service and give you a wide variety of characters you can build, but this is the first I’ve seen that has offered to build customizable monster minis. TitanCraft lets you select a basic monster model,  add clothing, body parts and items, and then pose your creation. There are 10 base monsters to choose from, but the TitanCraft team says more are on the way. You can try the demo of the crafting UI here: titancraftminis.com/monsters.

It seems like the demo is still a little buggy, but that’s to be expected when the product isn’t complete yet. The minis do look nice in the shots and it seems like TitanCraft is able to get some really nice detail in their prints. You can learn more about the site and the minis at the TitanCraft Kickstarter here.