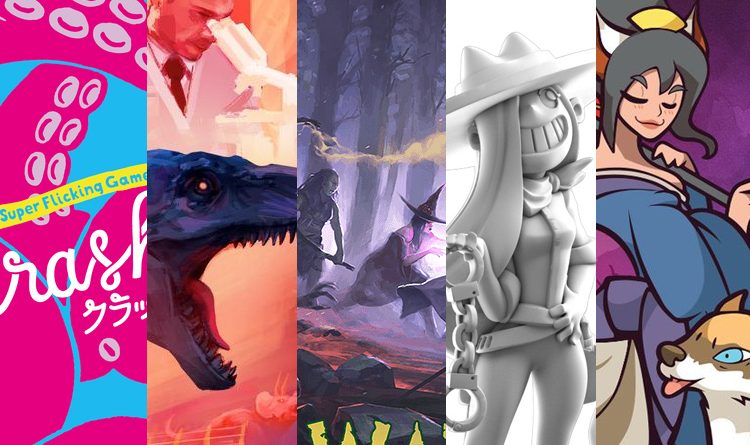 Jess
Friday’s here and with it come a list jam packed with fun Kickstarter projects! Let’s dive in!

Crash Octopus is a chaotic dexterity-flicking game about sailors trying to escape a giant octopus attack. The game starts with the players sailors, boats, and cargo being dumped into the ocean. Players will then take turns using their flags to flick their pieces to their boat. If you can manage to collect 5 treasures before the end of the game you win, but that is harder than it sounds because the octopus is also on the move. At the end of each turn, all players will drop a die once onto the octopus’ head. If it lands black side up, a tentacle will move to its location. If it is red side up, the octopus’ head will move there. If the round counter reaches the end before someone collects 5 treasures then the person with the most treasures wins. 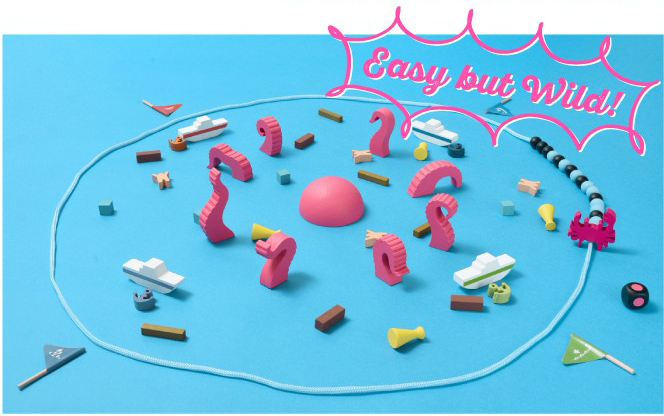 I love everything about this game from the theme to the using the flags to flick bits. The components are delightfully chunky and the color scheme makes it really pop. You can check out Crash Octopus here on Kickstarter to learn more.

Dinosaur World is a worker-placement/tile-laying game where you will be drafting groups of workers and then using them to take actions to build up your park, create dinosaurs, and tour your prehistoric paradise from the safety of your jeep. Of course, you have to mind your security levels, because those hungry dinos are apt to take a tourist as a tasty snack if you are not careful. In Dinosaur Island: Rawr ‘n Write you’ll be getting the Dinosaur Island experience in a roll and write. You have 3 rounds to draft dice, take actions, and earn income from your park. Like the other games in the line, your focus is to build an amazing theme park filled with dangerous dinos that will thrill your park patrons.

Considering I am such a huge fan of the original Dinosaur Island, this Kickstarter is highly tempting to me. Both games give you the same theme, but give you different mechanics to enjoy it. If you like tile laying or roll and writes and need more dinosaurs in you life, then make sure to visit the Dinosaur World and Dinosaur Island: Rawr ‘n Write Kickstarter here.

Set a Watch: Swords of the Coin

Set a Watch: Swords of the Coin is the stand-alone expansion to Set a Watch; a fantasy survival game where players must protect their camp while defeating wave after wave of monsters. This new expansion adds new locations, 4 new Adventurer classes, and a new merchant mechanic. When you camp you can earn coins that can be spent at the merchant to purchase powerful items. The Kickstarter also has another expansion called The Outriders. This pack adds 34 new creatures, 6 new Unhallowed, and the creature Rider ability which lets certain creatures pair up to create devastating teams. Both expansions are compatible with the original Set a Watch. 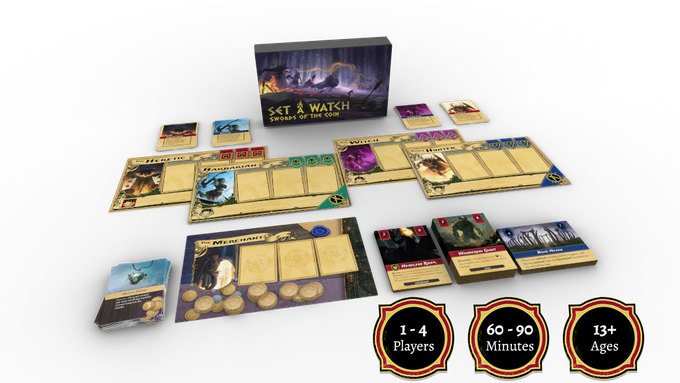 I enjoyed the original Set a Watch despite how tough it can be. Managing your resources and planning around the fact that each round 1 character will be forced to tend the camp, meaning they cannot participate in battle, provides a tense challenge that only gets tougher over time. The expansions in this Kickstarter sound like they add a lot of replayability to the game and I’m eager to test our mettle against the new creatures. Learn more about Set a Watch: Swords of the Coin here on Kickstarter.

Cactus Town is an asymmetric action programming game where players will take on the roles of Sherriff, Bandit, Bounty Hunter, or Can Can Dancer in an old west town. Each role has their own goal and special abilities that will help them achieve it. For example the bandit has specific locations that they are trying in the to find to steal from. The Sherriff, meanwhile, will be trying to locate the bandit and arrest them. Each turn, players will use 3 of their 4 action cards to program their movements and actions will be played out alternating between players in reverse order so that the last card played will activate first. The town is made up of a 5×5 grid of building cards and, if you play with the advanced version, the building have different effects that trigger sowing a bit more chaos into the mix.

Cactus Town is one of those games where you have to pay close attention to what the other players are doing so that you can try to anticipate their moves. Action cards are played face down, so with some careful observation you might be able to out think your opponent, but the most likely outcome with be a wacky chase throughout the town. Visit the Cactus Town Kickstarter to learn more.

Night Parade of a Hundred Yokai

In Night Parade of a Hundred Yokai, Enma, King of the Yokai, has gone missing. The yokai clans are now using this opportunity to take over! Each player will be in control of a different faction of yokai with unique powers looking to seize control over the islands by erecting 5 torii gates. Each player will have three Night Parades (groups of yokai) and on their turn they can activate 1 which will give them actions. Some of those actions will allow you to place a yokai meeple onto an island. Each island has a required number of yokai to claim and once you have enough you can place a torii. Other actions can help you remove enemy meeple, move a meeple to another island, and gain spirit which will allow you to get more yokai into your parades. 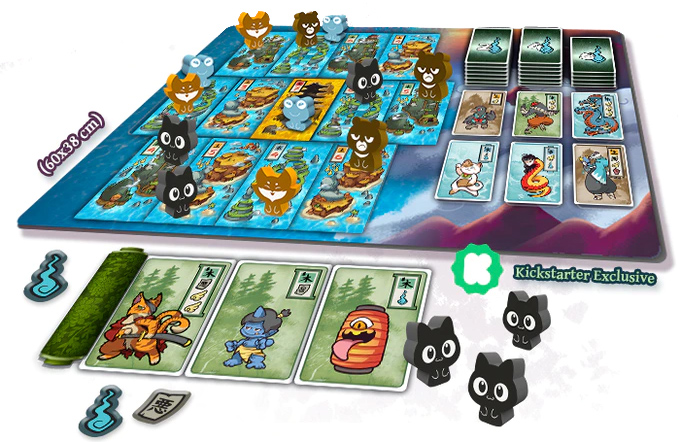 Night Parade of a Hundred Yokai looks like a fin mix of engine building and area control. You can learn more about it here on Kickstarter.