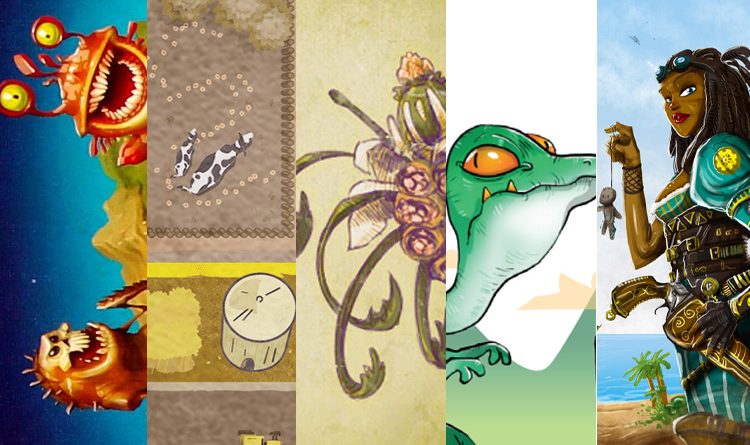 Jess
Friday is here. Before we devolve into a state of panic about what new terrors lay in wait for us this year, lets ease into something fun: Kickstarter projects!

In Big Monster the players are explorers discovering new lifeforms around the universe. I had a chance to play the game and we will have a full review up soon, but the gist of it is this: Big Monster is a drafting game. At the beginning of each round, you’ll have a stack of monster tiles and will draft one to add to your tableau then pass your stack to another player. Each monster type scores differently and there are rewards for the first person to collect full sets of certain types. You’ll keep doing this until the stack is spent and, after two rounds, you add up your score with the player who earned the most points winning the game. 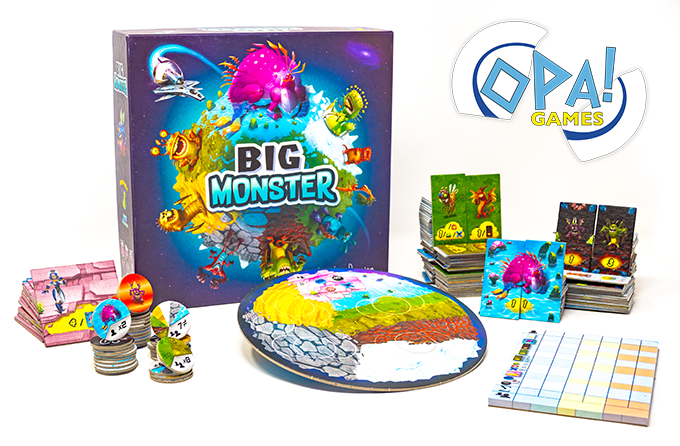 The fascinating part of Big Monster and what sets it apart from other drafting games I’ve played is that you get to decide who you pass your pile to. This adds a layer of strategy to the game that helped us stay really tuned in to what everyone else was playing. There were times when I wanted to avoid giving this or that player my hand as it was full of tiles that would benefit them. There is a minor speed element as everyone will be trying to hand off their tiles to the person they want to, but you can only ever receive 1 set and cannot hold onto your own unless there is no one else available to receive it. The game is fun, fairly quick to learn, and quick to play. You can learn more about Big Monster and its’ “Smart Drafting” mechanic here on Kickstarter.

Agropolis is part of the Spawlopolis line and plays similarly, but adds some new mechanics. The game is made up of only 18 cards and players will need to cooperate build the best farm they can by arranging the cards in ways that earn the most points. Each game will have 3 randomly drawn scoring rules. These rules have a score requirement that will be totaled up and that number is the score the farm must meet to win the game. On your turn, you’ll play a card from your hand into the communal farm. You cannot communicate what you are holding so you have to watch what the other players are adding to make sure your placements help the group. 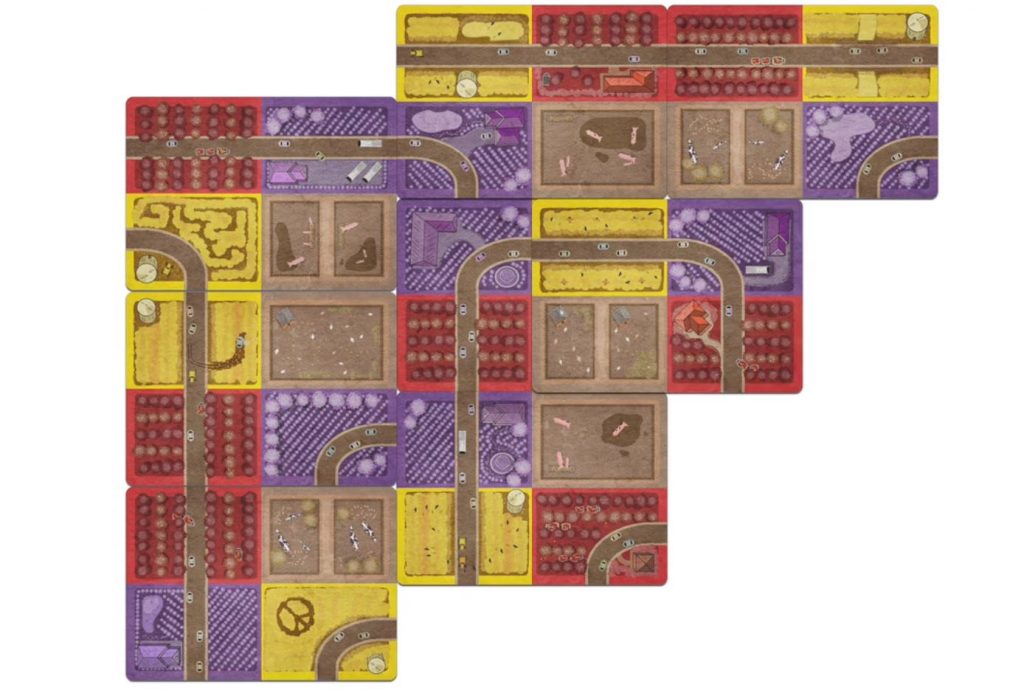 Agropolis adds two new features: Livestock Pens, which contribute to scoring, and the Feed Fee, which adds points to the required goal in order to win the game increasing the difficulty. I really enjoyed the original Sprawopolis and if you have it or buy it as part of this campaign, you can actually merge the two sets with the free expansion that comes with the Kickstarter. You can grab yourself a copy of Agropolis here on Kickstarter.

Inspired by the mysterious Voynich Manuscript, Flora is a game about Botanical Biologists exploring an island in search of rare Voynich plant specimens. The players will have 5 days to collect up 7 specimens, but there’s a problem: One of the biologists is a traitor! Players will be able to explore the land and waters of the island; the land side being easier to explore, but the water side being more rewarding. As they explore they will need to overcome challenges such as dangerous animal encounters, the weather, and unfortunate events. To succeed the players must share resources with each other by passing around backpacks that they will add items to. The traitor can try to make the group fail with what they choose to add or keep from the packs. 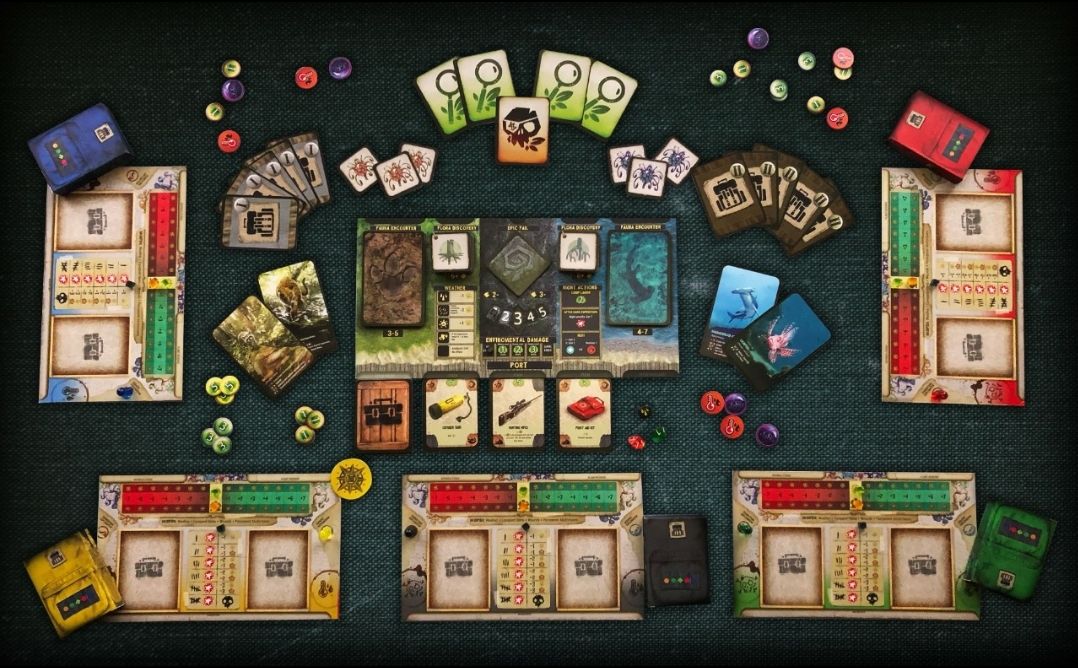 Flora looks challenging and I like that the traitor is not assigned until the third round, so you could start the game thinking you’ll be a helpful teammate until to learn on round 3 that you’ll be making a heel turn. You can check out Flora on Kickstarter here to learn more.

The problem with Dinosaur theme parks is that the dinosaurs always end up eating the visitors. Lost in Jurassica continues this tradition by tasking players with trying to escape the Jurassica Zoo before becoming dinosaur fodder. Each turn you can take two cards from any of the 3 decks and put them in your play area. You need to go through the explore deck to find the power switches you need to escape, but the deck is full of hungry dinosaurs and if you ever have 4 in your play area you must use items to defeat them. The Scavenge deck will give you materials that you can then use with the Craft deck cards to make yourself the items you need to fend off dinos. The first player to collect 3 power switches wins. 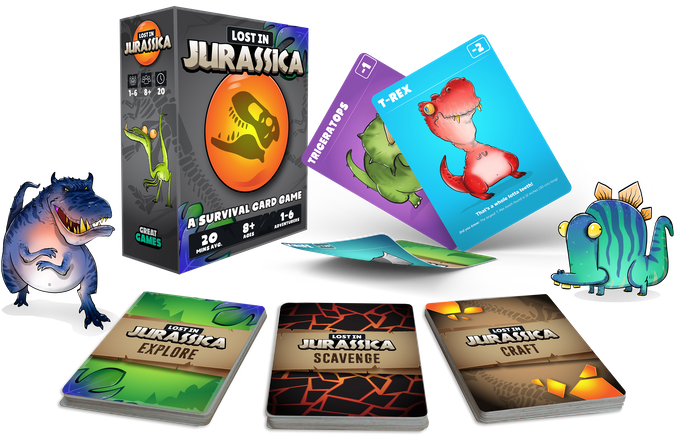 I like that Lost in Jurassica is a survival game, but no one is ever eliminated. Instead, the game becomes a race and the dinosaurs are only really there to slow you down. You can try to push your luck, digging through the survival deck, but eventually you have to deal with the prehistoric predators. There’s also a solo mode where you face off against a really smart T-Rex who is doing their best to destroy power switches before you can find them. Lost in Jurassica looks cute and family friendly. You can get your claws on the game here on Kickstarter.

Plunderous is a 4X game with a steam-punky pirate twist. In the game the players are privateers looking to ear the title of first Governor of New Caribbean. You’ll explore islands grab up their resources with your ship and mechs, complete missions, upgrade your ship, setting traps and mechanical sea monsters on your opponents, and starting votes to the rules of the game as you play. You have 10 rounds to earn Loyalists through your actions and the first Player to arrive at Governor’s Island with 1.5 million Loyalists wins the game. 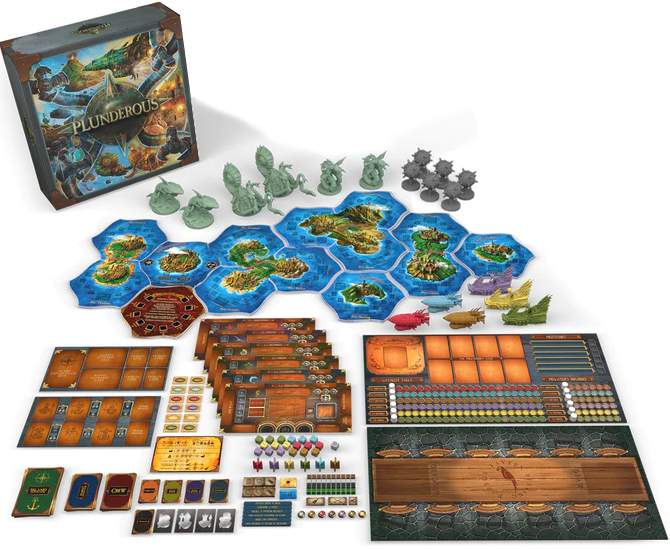 I like that the game has a modular board as it means every time you play might different and give you reasons to change up your strategy. I’m also intrigued by the player’s ability to change the rules. All of this adds up to a game that can potentially feel fresh each time it hits the table. You can learn more about Plunderous here on Kickstarter.