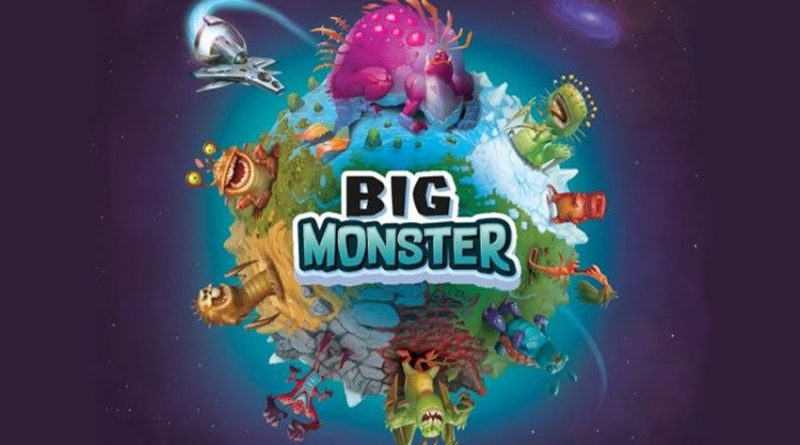 Big Monster is a tile-drafting, set-collection game with lots of scoring variety and a really clever mechanical twist, and it's super easy to enjoy!

Welcome to the world of Big Monster, where you can embark on an exciting mission to another planet full of colorful creatures and rare crystals! Collect them up and score big to win in this fun set collection game with a unique twist on drafting. 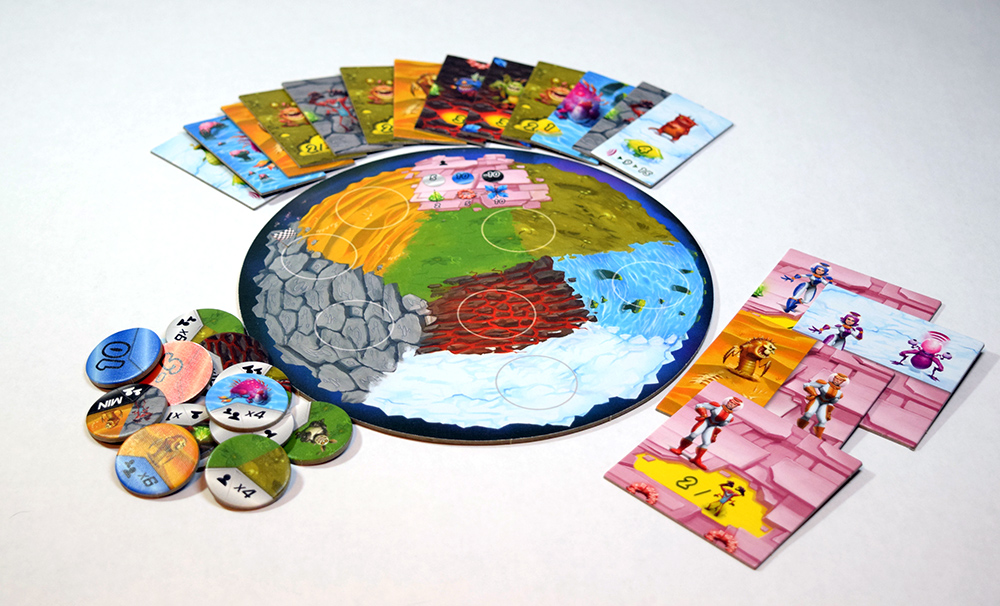 Andrew
Are you all ready for our monster hunting expedition?

Jess
I’m only missing one thing. Where do I get my standard issue bipedal, goggle-wearing, talking cat?

Andrew
Um… it’s not that kind of Monster Hunting.

Thanks to Opa! Games for providing a copy for our consideration and potential review

The game starts with everyone getting a unique character, a rocket ship tile, and a set of monster tiles. The set-up is a little different depending on if you are playing with teams, individuals, or a two player game, but the game play is similar for all three modes. We’ll be showing pictures from the 3 player set-up.

Your goal in Big Monster is to be the player who gets the biggest pile of points, and you’ll do so by drafting up tiles and laying them in your personal tableau. 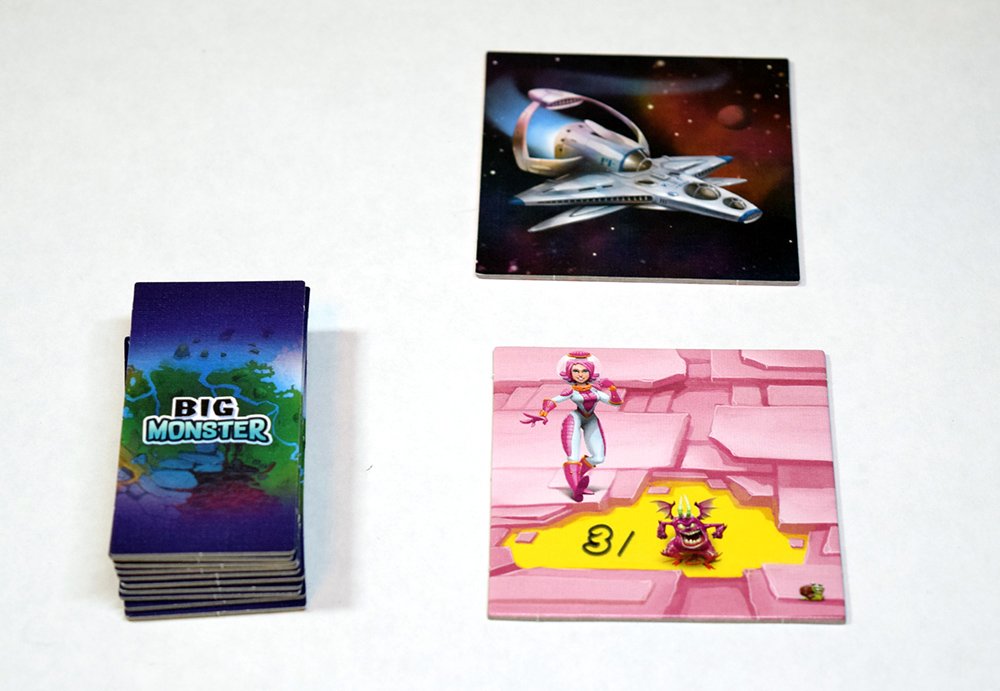 Andrew
Now I’ll just say right here that at it’s core, Big Monster is a pretty straightforward tile drafting & set collection game. But it’s got some really clever mechanics going on, and that all starts with the drafting itself!

In most drafting games, you select a card/tile/whatever from the pile you’ve been handed and then pass the remaining pile to your neighbor.  But using what Big Monster calls “Smart Drafting”, you will choose a tile from your hand, place it face down in front of you, and then give your remaining tiles to another player of your choice so long as they haven’t already been given a pile of tiles. That’s the exciting part: You get to choose who you give tiles to. This is the major aspect of gameplay in Big Monster. Of course you want to draft tiles that will benefit you, but, because you can control who you hand off to, you have to pay close attention to what the other players are doing in order to figure out who to pass to. 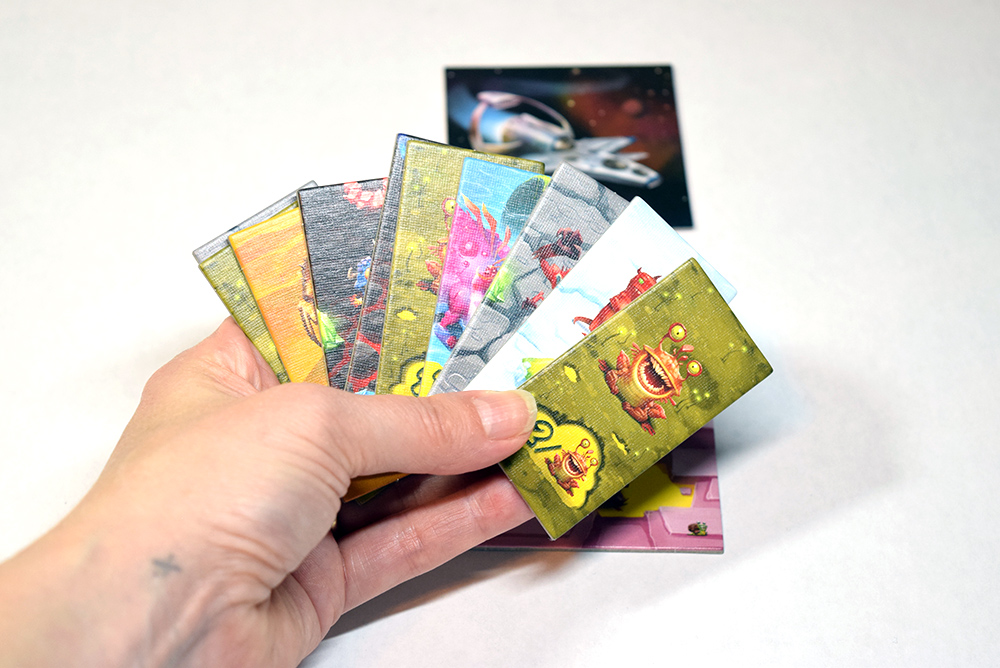 You don’t want to give someone a hand of tiles that will help them complete their sets, but you also can’t take too long deciding who to give to. Since the drafting and passing part of the round is all simultaneous, everyone will be passing their tiles to other players and if your target already gets handed a pile of tiles, you’ll have to resort to giving them to someone else or, in the rare case that everyone has already received a pile but you, keep your hand of tiles for another round. Depending on how your group likes to play, the handing off can be relaxed as everyone takes their time to ponder their tiles or it can be a fast blitz as players look to select and pass as fast as possible. It’s really up to you!

Jess
How often in other drafting games have you had a hand of cards and thought ‘I want more than one of these!’? Well, if you play your tiles right in Big Monster, you might have the chance to put your tiles down in front of yourself, meaning you get to pick again from that pile!

Andrew
Of course, that can totally backfire, because someone else can definitely plunk their pile of tiles right down on your spaceship, and if they’re smart, those tiles won’t be of any use to you whatsoever! 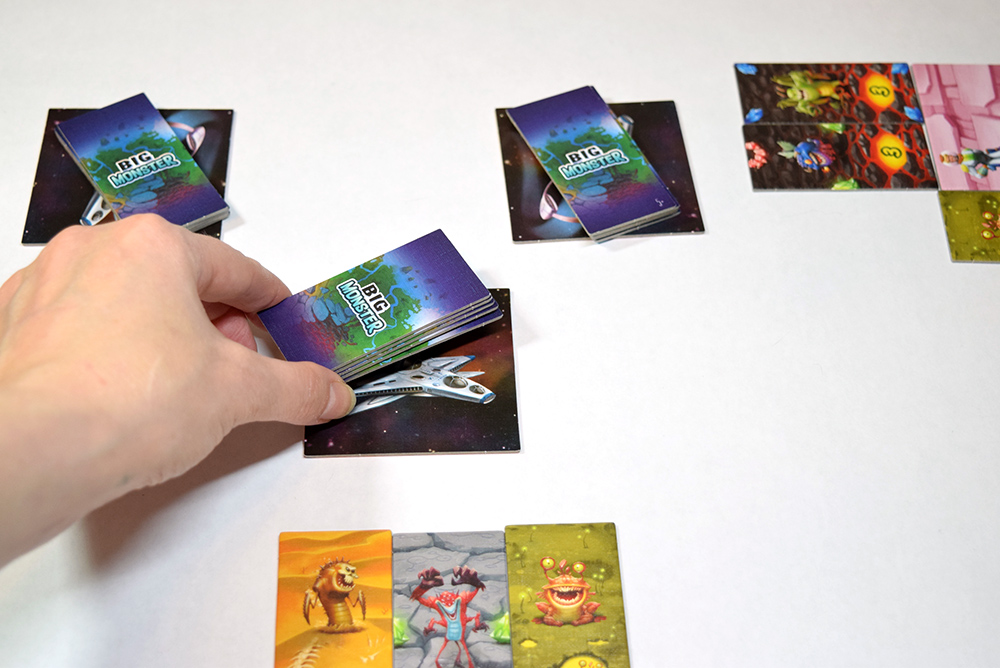 So we’ve got the picking and passing down, but what about these tiles themselves? Well each monster tile type scores differently depending on the number you have, where they are located in your tableau, and so on. When you finish drawing and handing off your tiles, you will add the tile you have drawn into your tableau. It can be placed anywhere so long as one edge of the tile is adjacent to an already played tile or the explorer tile. 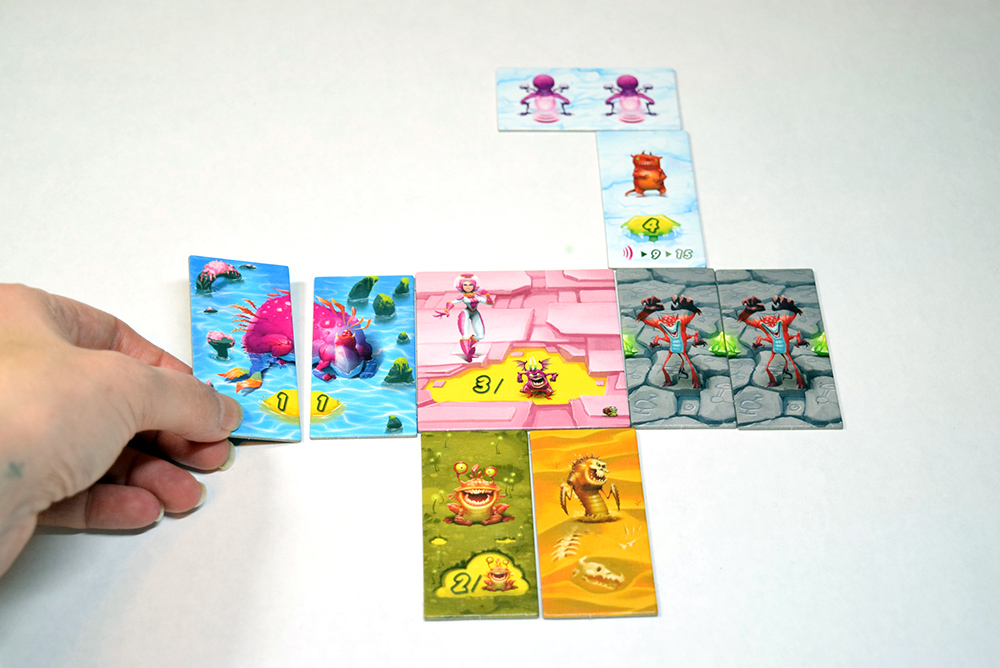 Each of the different monster types have different ways of scoring, and there are even medals awarded to the explorer who manages to gather specific numbers of monsters first (or best).  Some monsters score in very straightforward ways, like the Swamp Monsters who are worth more the more of them you collect, or the Lake Monster, that is only worth 1 point if you only manage to find half of it, but a whopping 11 points if you find both halves of its big tile!

Jess
There are even mechanics based on where in your tableau you put your tiles, like mutant tiles that grow in value depending on what monsters they’re next to, or the crystal symbols on the edges of some tiles that are worth points if you can complete them!

Andrew
The different scoring opportunities and the bonus medals give you just enough to think about when you’re drafting that there’s rarely a turn where none of the tiles you get are valuable – you’re just trying to decide between good options. 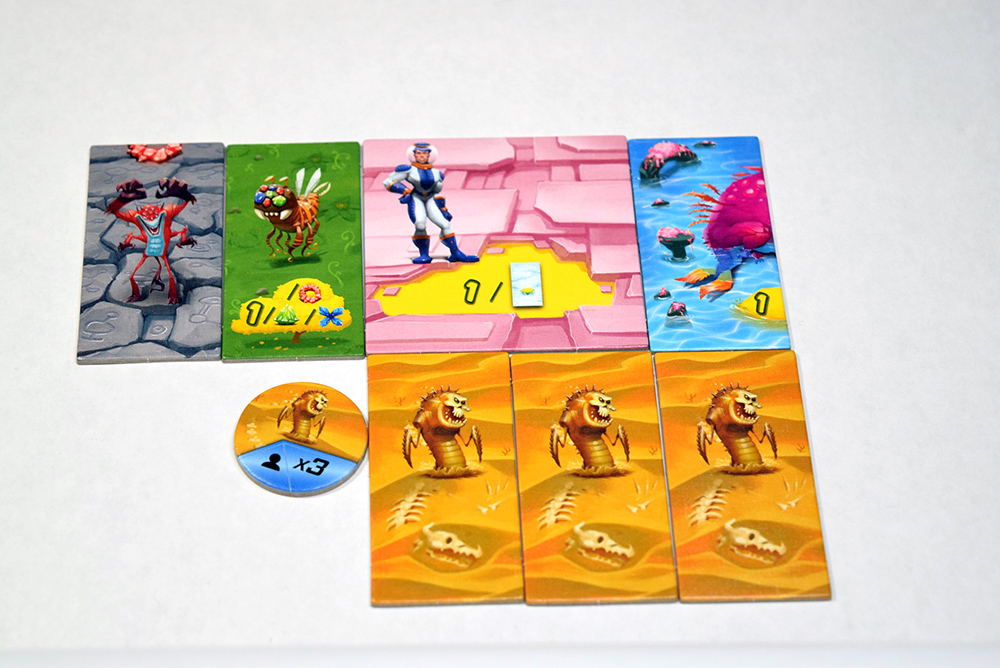 Once every player has 18 tiles in their tableau, the game ends and everyone tallies up their points based on tiles and medals.  The player with the highest score wins!

Jess
Let me get this straight: There are not cat monsters in this game?

Jess
And despite that fact, I still liked it… Impressive!

Our group really enjoyed Big Monster. When we first punched out all of the tiles the sheer amount intimidated us and I was worried that the game might be complicated and fussy. As it turned out, Big Monster is a light, quick-playing game that’s really easy to enjoy. After the first couple of drafts everyone had gotten the hang of it and by the end of our first game we had each already developed different scoring strategies, all of which were pretty competitive!  And considering how quick Big Monster is to play, it was easy to just shuffle the tiles, swap out some medals for scoring variety, and get right back into the game! 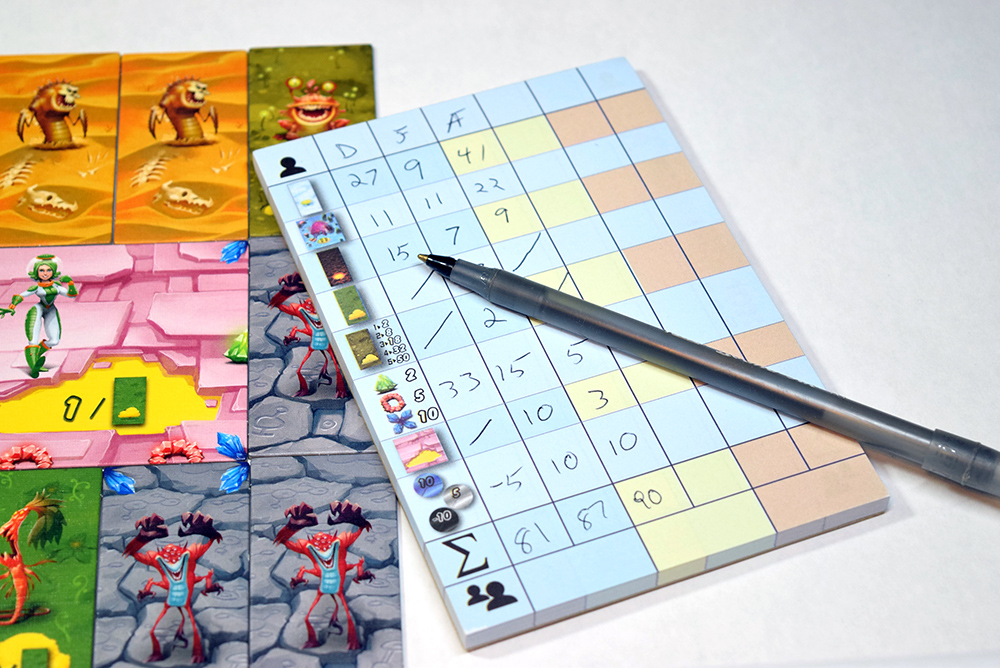 As I said before, the “smart drafting” mechanic is where Big Monster  stands out. I haven’t encountered this style of drafting before and it added a whole new aspect to consider when passing off my hand. I suddenly was paying a lot more attention to other player’s tableaus than I would in a regular drafting game. At three players it was a blast, and I can imagine that at a full player load of 6 (when you play in teams) it can get even more intense, since you’ve got teammates you’ll want to pass useful tiles to and opponents who are looking to give you their junk.  And at 2 players, the drafting mechanic gets modified but still keeps the same feel, because every time you draft you take a tile for yourself and then eliminate a tile from the offer, so you still have limited control over what your opponent’s options are.  Clever design all around!

One note, while the art in our demo copy sadly only displayed white characters, the Kickstarted version will have updated and more diverse characters in the art.

All in all, we definitely recommend Big Monster for folks who are fans of quick drafting and set collection games with a clever strategic twist!  The player count differences mean that it’s a game that is absolutely perfect for your next family game night but will still work well with just 2, and the variety in scoring options mean you’ll always have something to think about!

Big Monster is on Kickstarter right now. You can find the campaign here.