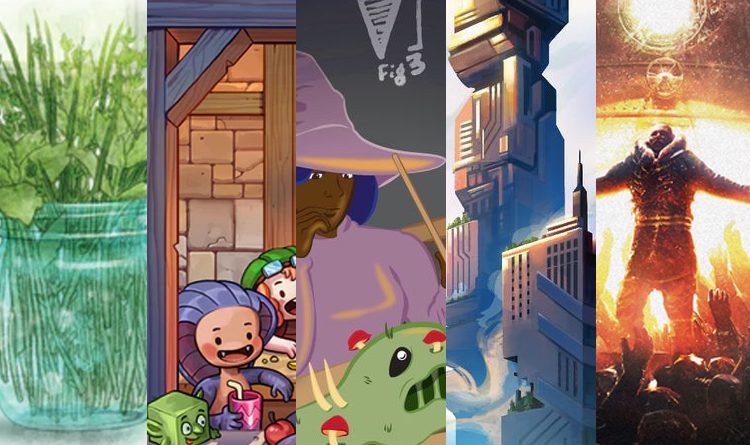 Herbaceous – Pocket Edition is a miniaturized version of Eduardo Baraf, Steve Finn, Keith Matejka’s push your luck, set collection game, Herbaceous. In the game you will be trying to collect valuable sets of herbs and each turn you’ll draw a card and then must decide whether to keep it or add it to the community pile. You can also decide to use one of your precious pots to assemble a set from your personal pile and the community pile. Once you have potted those herb cards in your pot, you cannot use that pot again. You only have 4, so knowing when to finally grab a set is key and there’s always the danger that someone might try to grab that set first. The person with the highest scoring collection, wins. 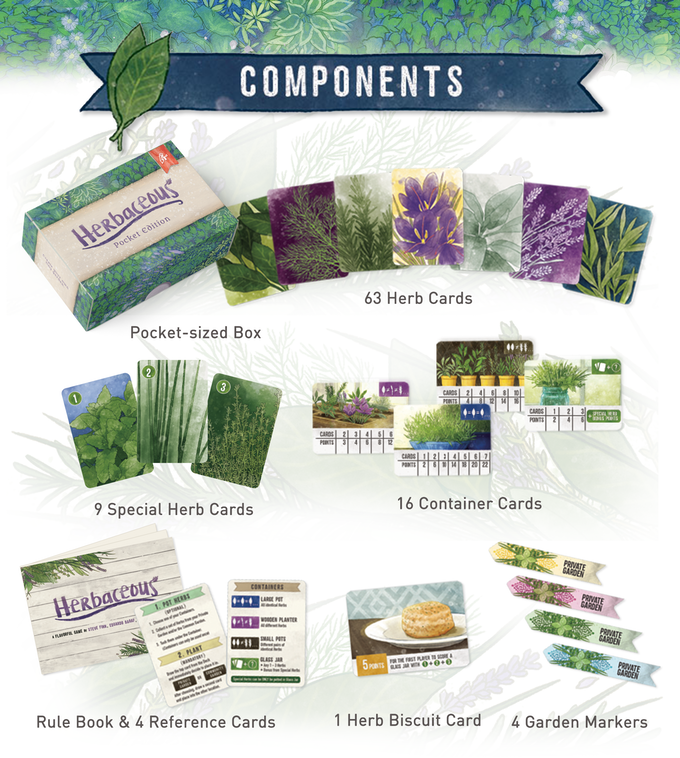 This pocket edition has not only been shrunk to a smaller format, but also streamlined with the rules having been smoothed out to keep the gameplay fast. Other than that, you are still getting all the bits that came with the original edition, just in a smaller format. I absolutely love that they’ve made a pocket edition as this is the perfect little travel game for anyone who loves push your luck, set collection, gardening, and gorgeous art. Learn more about Herbaceous – Pocket Edition here on Kickstarter.

Dungeon Drop is a blast of a game.  It’s a dungeon crawler where you start by dumping all of the cubes in the box onto the table. Where they land creates the dungeon you’ll be exploring complete with monsters and treasure. This Kickstarter brings us 2 new additions to the series Dropped to Deep and Tavern Tales. Dropped to Deep is an expansion that introduces new elements like Huge monsters, new Armor cubes, rules that change some cubes into powerful relics, extra races, classes, and quests, as well as a new co-op mode. Tavern Tales is a standalone set collection and bluffing game in the series where players are trying to one-up each other in a contest of boasting. 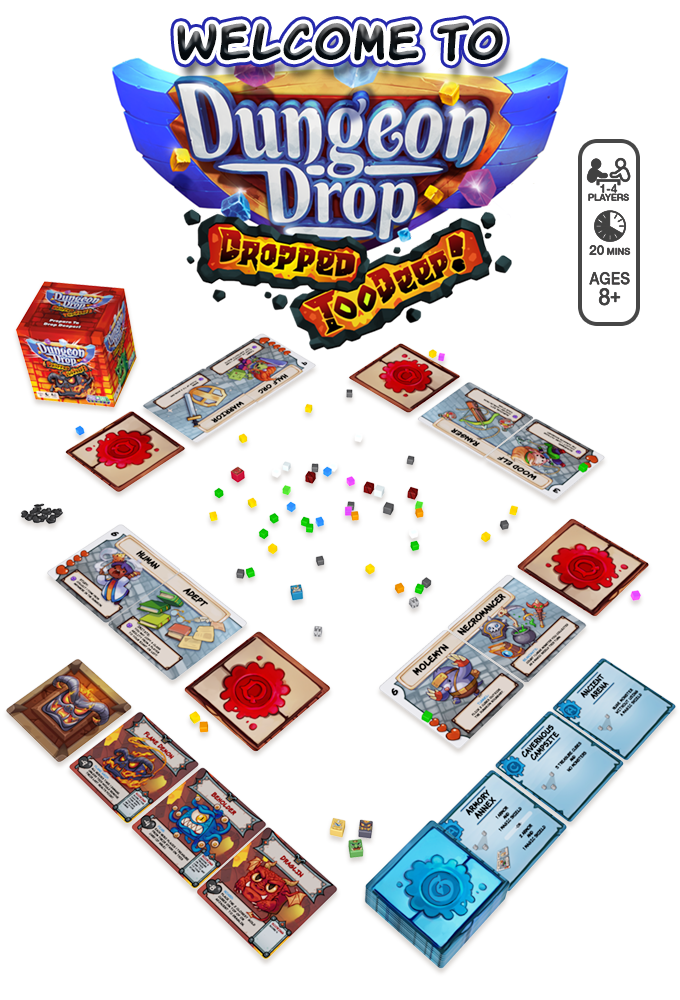 I love Dungeon Drop and the expansion sounds like it adds a ton of cool content while Tavern Tales can be a fun pairing to play directly after a game of Dungeon Drop as it plays out the story of “adventuring through a dungeon and then going out for drinks afterward” nicely. Lean more about Dungeon Drop: Dropped Too Deep and Tavern Tales here on Kickstarter.

Studies In Sorcery is an engine building and drafting game where everyone plays sorcerers working on their final projects in school to earn their Master’s Degree in the Dark Arts. Everyone wants to be valedictorian, so they’ll be competing to complete the best projects. To do so you’ll need to dig around in the graveyard for materials (that also act as cash), and buy projects from those on offer. Each turn you’ll be able to add 1 material to your project and once its requirements are fulfilled, you gain the power of the project. With some clever plays, you can build yourself an engine which will give you extra actions and materials; making it that much easier to complete more projects. 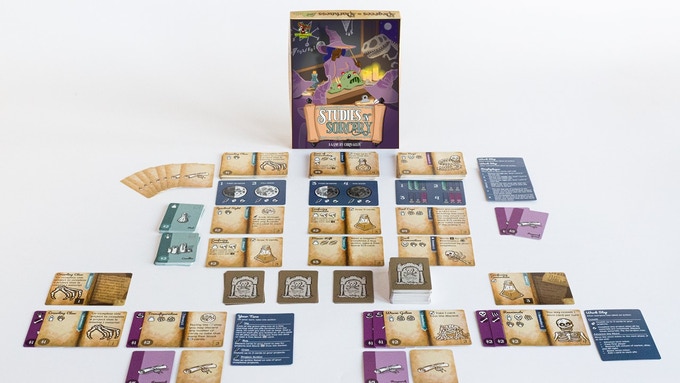 Andrew and I had a good time with the game once we got into the groove of it. I like the push your luck aspect of the graveyard where there are a series of face down piles and when you dig you get to look at the first pile. If you choose not to take it, you must add a card to that pile and move on to the next. The more players pass over graves, the bigger they get, making them mush more valuable in the future. Studies in Sorcery has a great theme and fun gameplay. Check it out now on Kickstarter here.

High Rise is a strategic city-building game where players compete to construct towering skyscrapers across a city. The players will take actions by moving around a one-way board. You can move as far along the track as you want, but that means you’ll be missing out on whatever you passed over. So there is a bit of a push you luck element of whether you take your time, getting more actions, or if you jump ahead to get that space you want before someone else claims it. This Kickstarter is funding another printing of the game; this time with super cool 3d building pieces. Originally the game came with cardboard standees for the buildings, but the plastic versions really create a more visually exciting game.

We’ve greatly enjoyed playing High Rise and this new edition is super tempting. I really like the 3d designs for the buildings as they still capture the look of the original art. You can learn more about the exciting High Rise: The UltraPlastic Edition here on Kickstarter.

Frostpunk: The Board Game

Based on a challenging survival/city-building video game, Frostpunk: the Board Game sets the players in a winter wasteland. As leaders of their community, the players must manage their people; giving them what they need to survival while keeping their spirits up. Explore the frost lands. construct buildings, enact laws, build up your technology, and try to survive 12 rounds of brutal weather and hard choices. 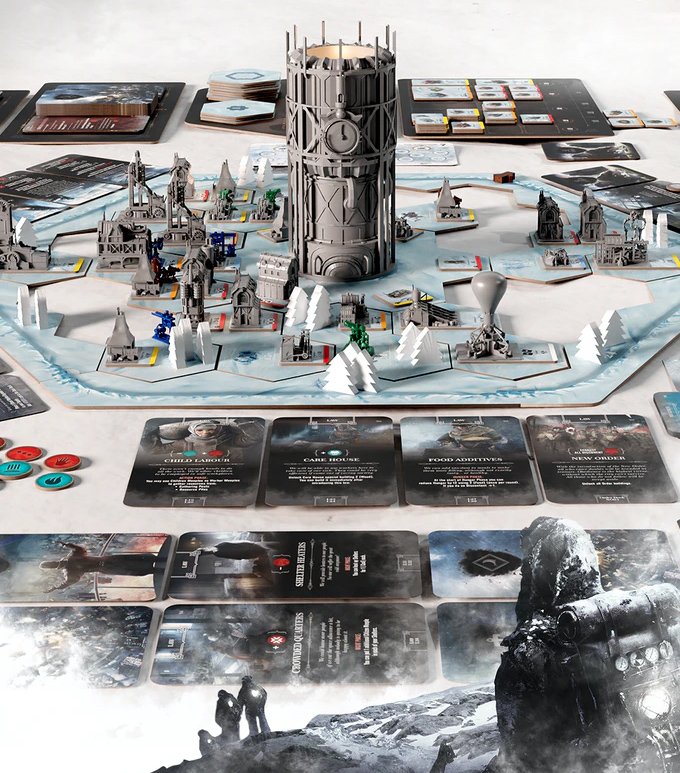 I was really impressed with the original video game so I have high hopes for the board game. The art is gorgeous, the components look fantastic, and it looks like the game will be just as tough to win. If you love tough cooperative games that force you to make brutal choices then makes sure to check out Frostpunk: the Board Game on Kickstarter here.