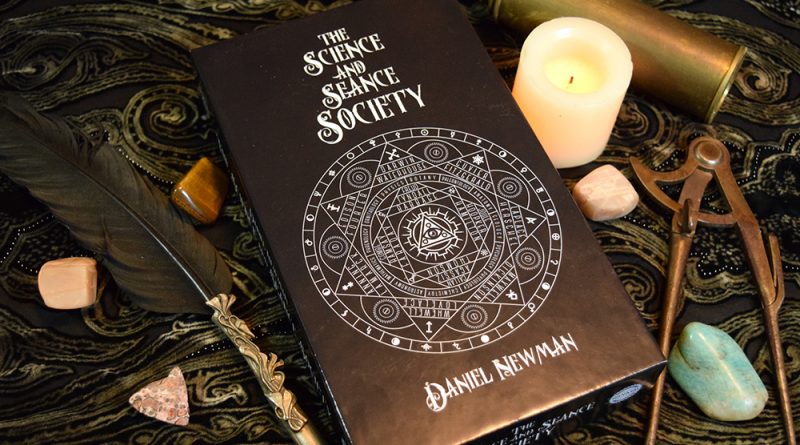 The Science and Seance Society presents two players with asymmetrical puzzles to manage as they race to be the first to complete their unique objectives.  But while you're rushing forward towards your goal, you'd better be ready for your opponent to be constantly messing with you, and you'd better be prepared to do the same to them. 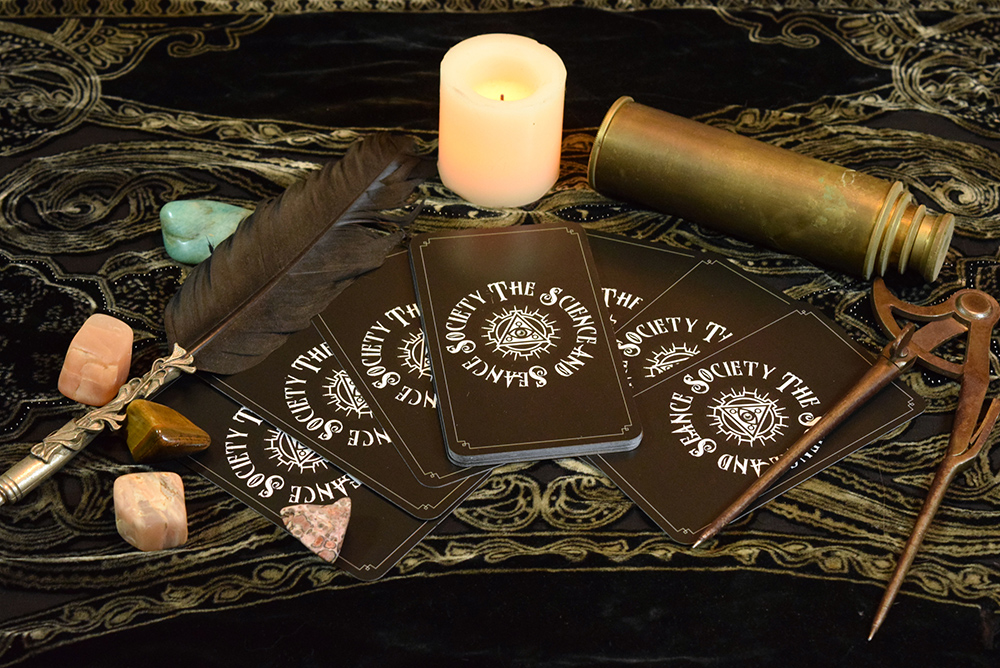 We received a prototype of The Science and Séance Society for our consideration and possible preview, along with the right to request a finished copy of the game.  We weren’t otherwise compensated.

In The Science and Séance Society, one player will represent the Science part of the titular society, and the other will (obviously) stand on the side of Séance.  Each player is racing to reach their victory condition before the opposing player can manage it, but both will be given plenty of opportunities to disrupt the other’s progress along the way. 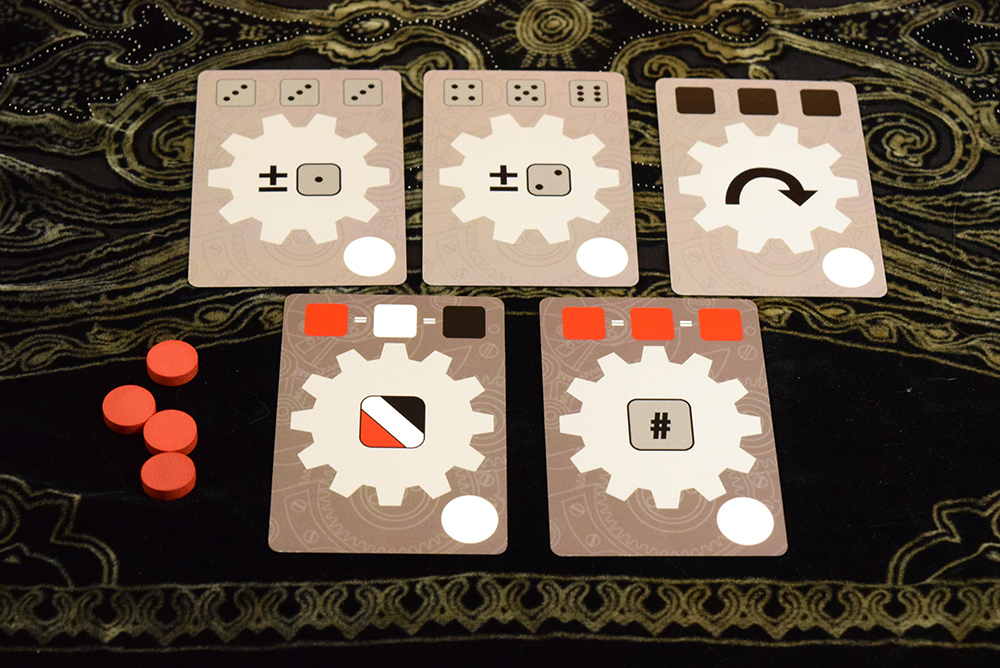 The Science side of things is trying to complete its Science Engine – a tableau of 5 cards, each of which requires the placement of 3 dice to engage.  Each card requires some specific combination of colors and/or dice values, and each complete card will give the Science player the ability to manipulate their dice.  If the Science player can manage to activate all 5 of their Science Engine cards before they lose or the other player wins, they claim victory!  FOR SCIENCE! 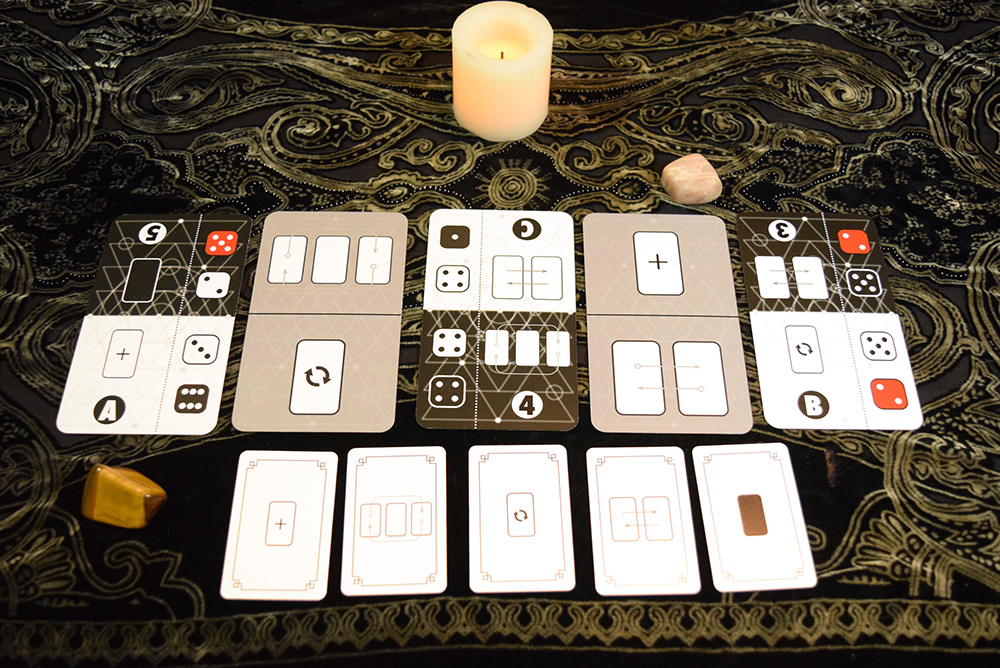 The Séance side of the game is all about using their tarot-sized cards to manipulate their tableau to meet a specific arrangement, either alphabetical or numerical, decided at the beginning of the game (by the Science player no less, which means the ability to mess with each other starts during setup, which might be some sort of a record).  The Séance player can use the abilities of the cards in their tableau to rearrange and flip their cards, as well as replace their tableau cards with ones from their hand.  If the Séance player ever runs out of cards to draw they lose, but if they can manage to arrange their tableau correctly before the Science player finishes their Engine, then it is the way of the mystic arts that claims victory.

Andrew
I find it interesting that the Science side is driven by dice, which are inherently unpredictable, whereas the Seance side is all about hand and tableau manipulation.

Jess
Yeah, that felt a little mismatched to me too, since even though you’re dealing with random draws, there’s much less that is unpredictable about how the Séance side works…wait, is that because they possess otherworldly insight, whereas the Science side is just figuring things out as they go?

Andrew
I mean, the game’s really abstract so you can more or less ignore the theme if you’re inclined, but, uh, sure! 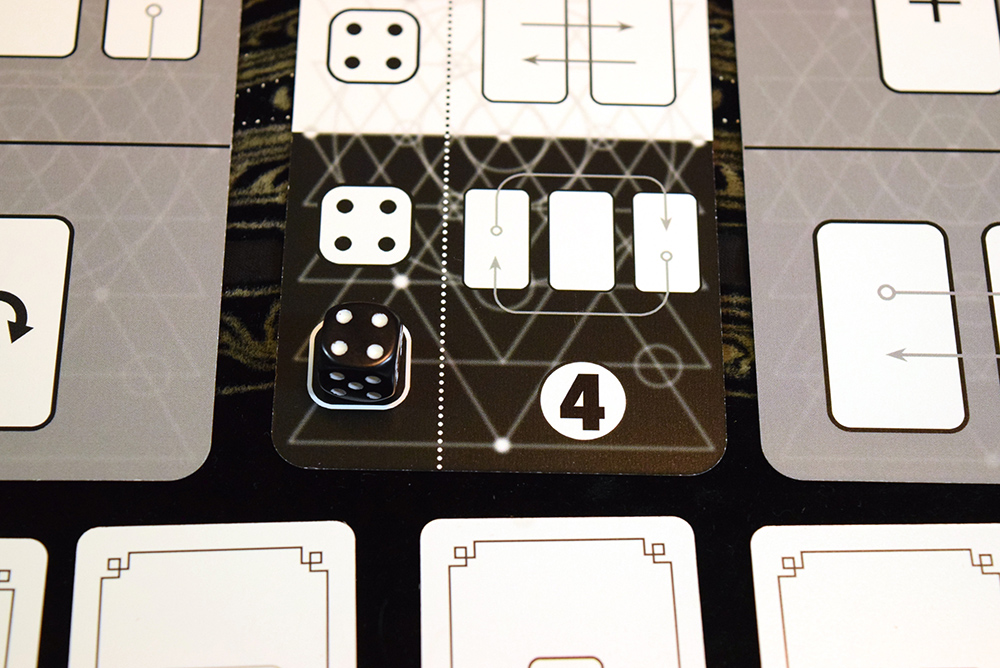 Not that I’m suggesting for a moment that you should ignore the theme – it’s a brilliant idea for a game – but there’s nothing about the gameplay which strongly reinforces the theme.  What the gameplay does reinforce is a constant need to balance strategic decisions around whether you’re going to focus your precious cards/dice on advancing your own goal or using them to trip up your opponent.  The Science player has the chance to drop dice on the Séance’s tableau – any card with a die on it cannot be used for its ability, and should a second die be placed on the same card, then it gets tossed from the tableau and gets replaced by a card of Science’s choosing!

Andrew
Which can be devastating! 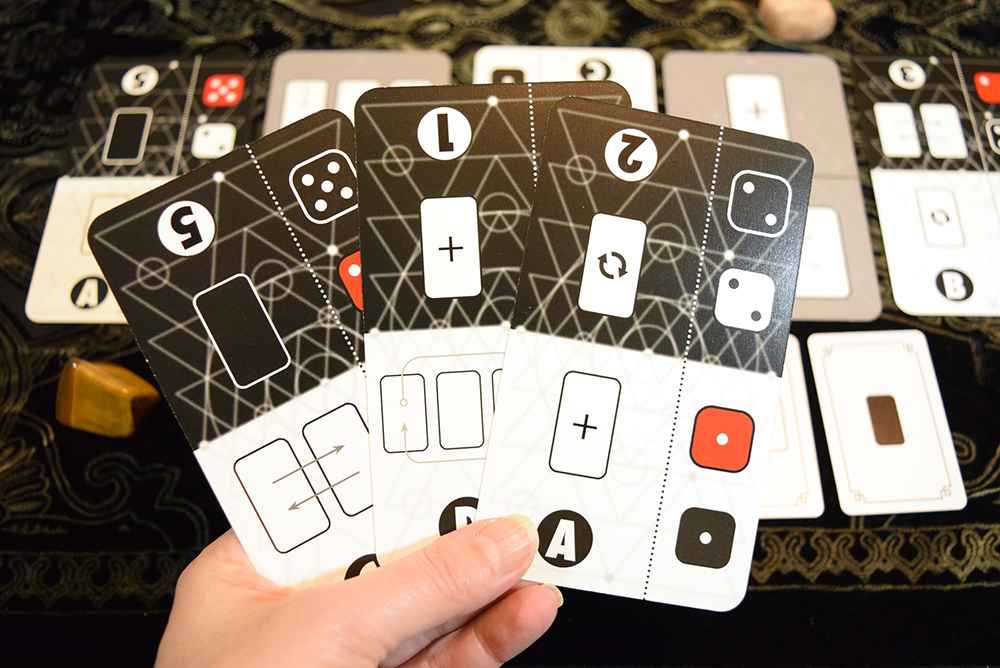 But Séance can play dirty too – by discarding cards, they can wipe dice off the board, either from their own tableau or from any incomplete Science Engine card, erasing the progress Science is making towards its goal and forcing it to use more dice towards that card’s completion.

Jess
And that’s one of the major challenges in The Science and Séance Society – play too aggressively and you’ll run out of resources before you can finish your goals, but play too defensively and you won’t slow your opponent down. It’s tough! 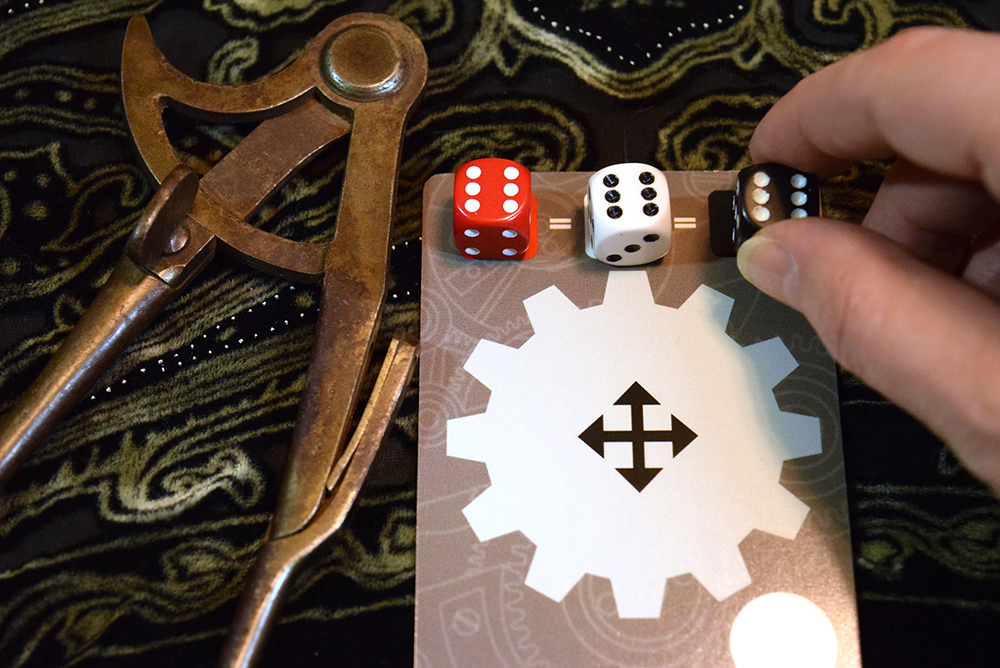 I enjoyed The Science and Séance Society the first time I played it, long enough ago that it was basically unrecognizable from the game it has become today, and I’m pleased to say that this iteration of it has clearly seen a ton of development and polish.  I love the interlocking puzzles that function in completely different ways, and I enjoy playing both sides of the table.  And I have to say, I adore the clean, abstract art, particularly the gorgeous, stark geometry of the Séance cards.  We confirmed with New Mill Industries that the appearance of the game is final, as are the rules, so the experience we got during our preview is the one players will get from the finished game.

Jess
I’m glad that you liked it as much as you did. I did too, but I have to say that I found myself a lot more excited to play Séance than Science. And not for thematic reasons, either!

Jess
Well, I felt like it was easier to plan as Séance. With Science, you were at the whim of the dice. With Séance, you knew what you were holding and what you would be able to do. Your ability to influence the board wasn’t as luck-dependent. If you needed a card, you knew it was somewhere in your draw deck. Science could go literally the whole game without rolling a Red 6 or whatever. Dunno, just a personal thing, and it didn’t stop me from enjoying playing as either side.

Andrew
You’re not wrong there – it definitely felt like there was more randomness in Science. On the other hand, Science gets stronger as the game goes on and they complete their Engine cards, whereas Séance is easier to mess with and the effect of having a card discarded out from under you can, as I said before, be totally brutal. 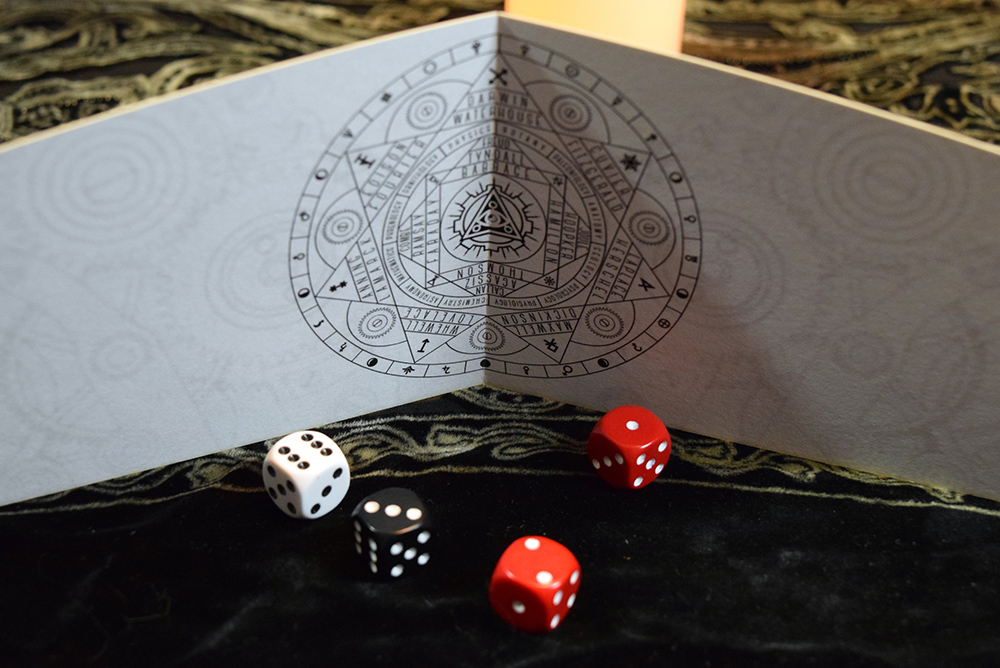 The Science and Séance Society delivers on its promise of 2 interlocked but different gameplay experiences, driven by toothy player interactions and a decent dose of luck and luck mitigation.  It’s a percussive game, with a tight decision-space that, for us, lead to fast turns and a-hah! moments when things clicked into place and you got to make big plays and rush towards the end of the race…assuming the other player didn’t manage to toss some caltrops in your path.  Overall, we enjoyed The Science and Séance Society as a unique, well-crafted abstract challenge for 2 and definitely recommend heading over to the Kickstarter when it goes live on 10/13!