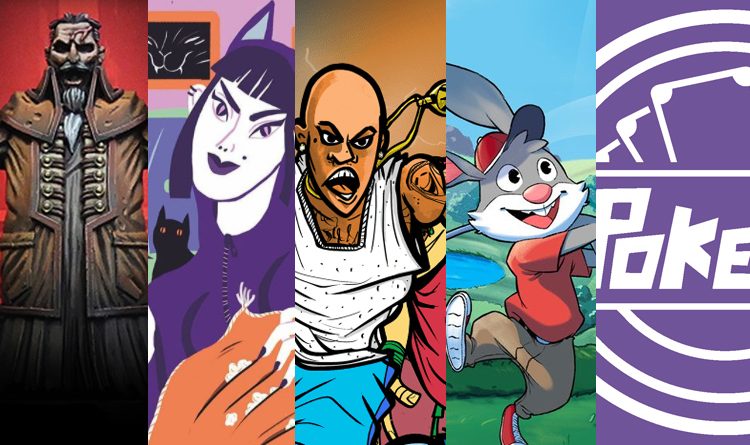 Jess
Happy Friday everyone! The end of the week is here and that means another Kickstarter roundup! Let’s see what projects are on tap this week.

Darkest Dungeon: The Board Game

Darkest Dungeon is a crushingly difficult dungeon crawler video game full of mind twistingly horrifying monsters. Now Mystic Studios is bringing the terror to the table with Darkest Dungeon: Th Board Game. In this cooperative game players will delve into the depths beneath the manor and try to survive through injuries and madness inflicted by the things that lurk in the shadows. Darkest Dungeon: The Board Game comes with a campaign of 11 missions broken up into 4 acts. The first three will consist of 2 quests and then a boss fight. Once you’ve defeated the 3 bosses, the gate to the Darkest Dungeon will open and your final fight will begin. 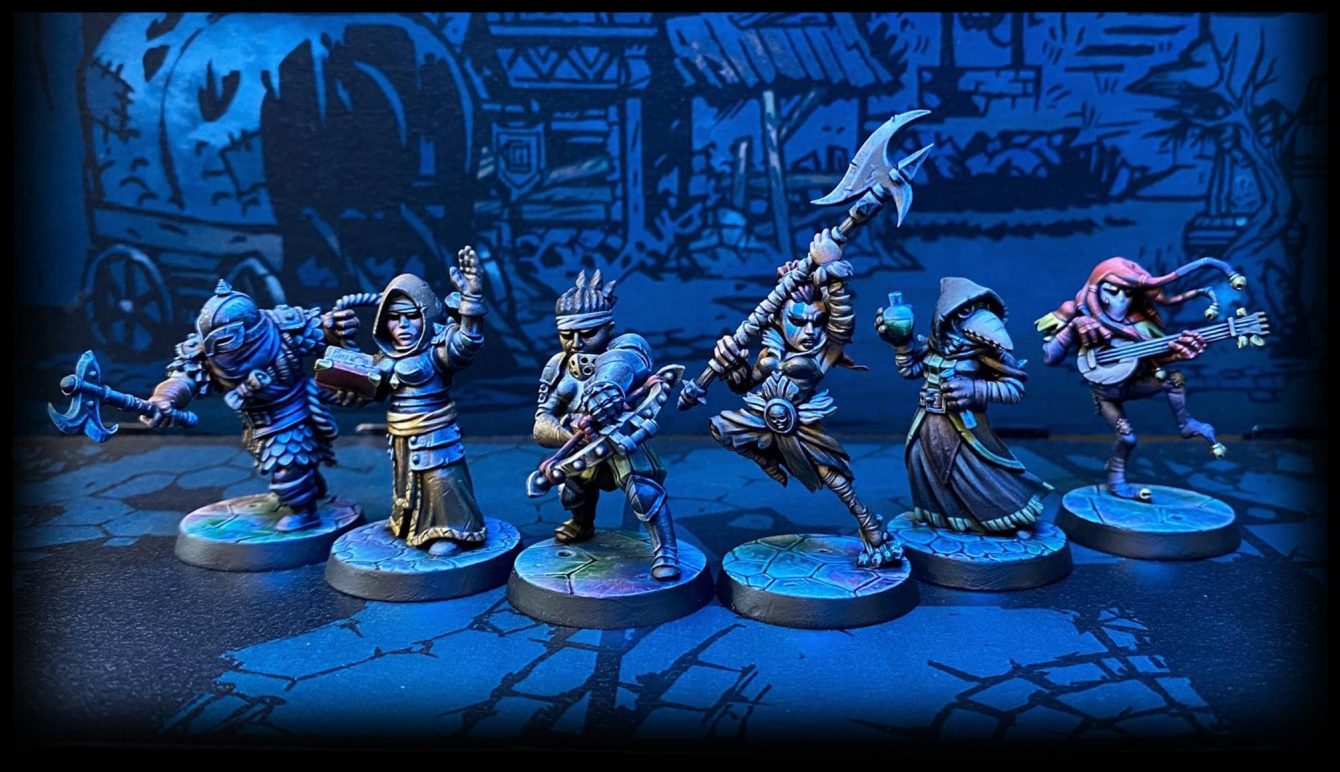 I love Darkest Dungeon and this board game looks like an awesome reimplementation of the game. It is a hefty game with its 72 miniatures, 32 dice, over 400 cards, tokens, double sided tiles, and so on, but I am severely tempted by this campaign. If you love tough co-ops and horror games then definitely make sure to check out Darkest Dungeon: The Board Game on Kickstarter here.

Dogo Dash is a card game based on the idea of Rock paper Scissors. Each player will get a hand of 4 cards and at the start of the round everyone will choose a card to play face down. Once everyone has played a card they are all turned over simultaneously while the players bark or shout Dogo Dash. Each type of card can beat another type such as Dog beats cat, but cat beats human. The strongest card played, wins and collects the cards which become points. Players redraw and start again. Once the draw deck is empty the game ends and the player with the most pints wins. 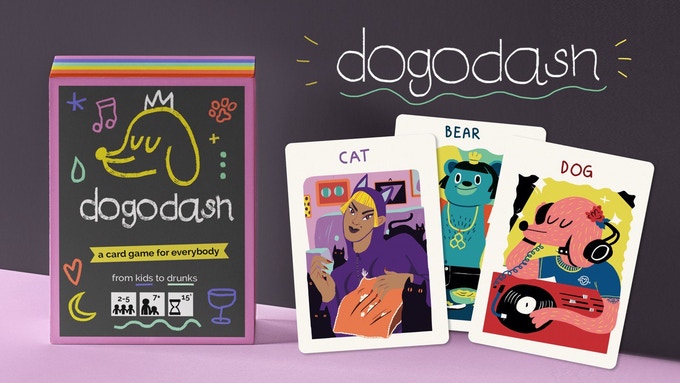 Dogo Dash looks very simple, but if you pay attention to the cards that have been played, you can anticipate what cards might be available to players and try to craft a strategy to win. Because the game is light on rules it is family friendly and an easy filler game to enjoy at game nights. You can learn more about the delightfully illustrated card game here on Kickstarter.

Hoop Godz is a game where 2 players compete to score 7 points in a street basketball game. Each player will choose 3 characters with unique stats and skills to be on their team. On your turn you’ll be able to attempt take 1 of three actions Move, Pass, or Boost or a card action. These actions cost energy and can help you move your characters into position to score points. Your opponent has the opportunity use cards to respond to your actions thus initiating a real time dice battle where you both will roll dice, trying to match the icons on your played card. The first to match will succeed in their action. You’ll score different amounts of points depending on where you are on the board when you make a shot and the first player to earn 7 points wins. 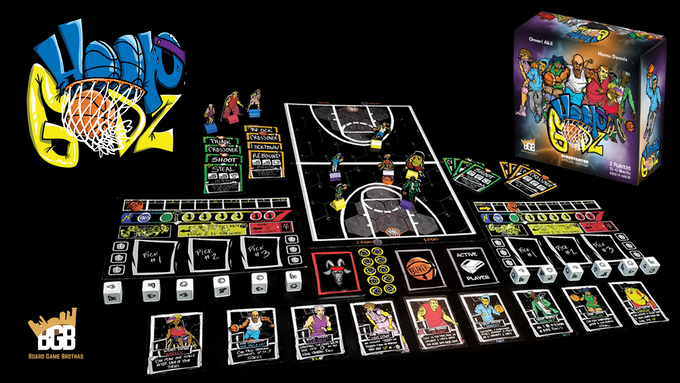 Board Game Brothas killed it with their last game Rap Godz and I have every expectation that Hoop Godz will be an absolute blast. The energy management system is really clever and I love the idea of using real time dice battles to determine moments where the teams clash. It sounds like it give the game a really fast, actiony feel which is what I associate with basketball. You can learn more about Hoop Godz on Kickstarter here.

Roll In One is a golfing game that uses custom dice to determine your swings and terrain tiles to form holes. Each round the first player will design a hole by arranging the tiles and then everyone will take turns rolling a die (which acts as your club) to find out where their ball goes. Once you manage to get your ball to the green, you tally up your score. There are different types of terrain hexes on the tiles that will affect what happens to a ball if it lands on them. For example, landing in the sand hex means that the first roll will not move the ball unless you roll dots. As I mentioned before, each die represents a different club and have special symbols that will work better for different types of terrain so knowing which die to choose on your turn can make all the difference. 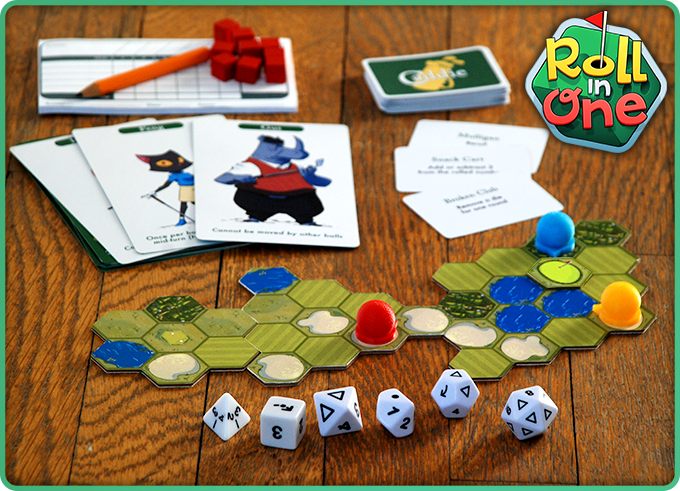 While I’m not a fan of golf in real life, Roll In One sounds like a really clever take on the sport. I love that you get to design the holes and the art is just wonderful. Head on over to the Kickstarter to take a swing at Roll In One.

The Poketto Collection is a group of three pocket sized games that are perfect for bringing a little horror, fantasy, and sci-fi anywhere you go. The set includes The Blessed Dark, Castle Siege, and Starforge. We actually own a copy of The Blessed Dark and reviewed it here, but the quick idea is that it is a game for up to 4 players where everyone is trying to gain victory points by summoning demons. Its a quick-play card game with push your luck and take that mechanics. Castle Siege is a 2 player game where players build castles and attack each other’s with trolls, fireballs, archers, and more. Last castle standing, wins! Lastly, Starforge pits 2 players against each other in a competition to see who can is the best commander in the galaxy. There are 3 ways to win the game: control 6 points worth of locations, defeat all of your opponents ships, or maintain a hold over 4 resource cubes on your starting location.

I love travel games as Andrew and I always bring a bag of games whenever we travel. Having pocket sized games means we can bring more with us easily. I know for a fact that The Blessed Dark is really fun little game and the others sound like a good time too. Get your hands on the Poketto Collection here on Kickstarter.