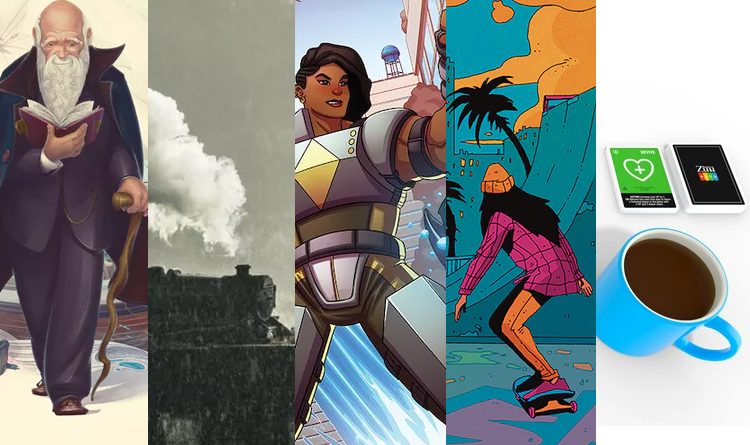 Jess
The holiday’s are over and I’m back ready to dive into the deep end of Kickstarter. Let’s see what caught my eye this week!

Darwin’s Journey is a Euro-style, worker-placement where players follow in Darwin’s footsteps through the Galapagos Islands. Over five rounds, players will send their workers out to perform a variety of tasks such as exploring the islands, sailing their ship, learning at the academy, or researching specimens. You gain victory points and special abilities based on the completion of personal and public objections which require you to meet certain thresholds. 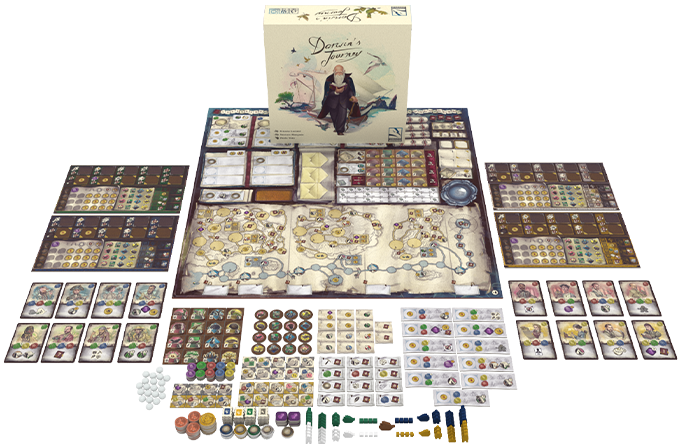 A fascinating aspect of Darwin’s Journey is that you can develop your workers’ skills. Managing their skill combinations is just as crucial as when and where you place them during any given round because some locations require certain combos. I like that the game mixes in exploration with the ship track. As you move your ship you can drop off explorers on islands to discover species, set up camps, and gaining bonuses. There’s a lot going on in Darwin’s Journey and all of it contributes to creating combos that will build up over time. Each round you will see your actions having bigger and more exciting effects. The game looks extremely thematic and has a lot of room for players to develop their own play style. Explore Darwin’s Journey on Kickstarter here for more info.

In Card Rails players seek to gain points by building up railroads that they have shares in. Each turn you’ll have the option to Take a Share or Build Track. To take an action you must discard a card from your hand, but the cards you have in hand will count as shares at the end of the game, so you have to be strategic about which ones you toss. Using the card to take a share can give you more control over which railroads you invest in. If you use the card to build with, it becomes part of the map that the railways will be built on. At the end of the game, whoever has the most shares in the most valuable companies wins. 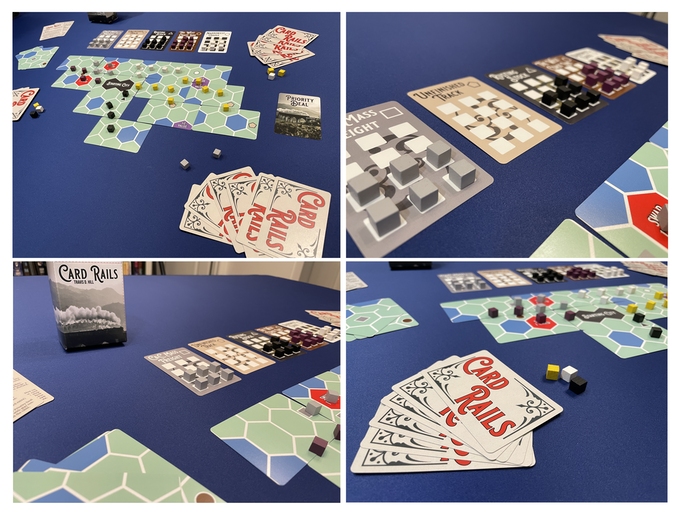 I like that Card Rails doesn’t have a set map and depending on how you place your cards you can expand you line while blocking off opponents. The game looks highly strategic while using simple gameplay. Unfortunately Travis is only making 100 physical copies and all of them have already been claimed, but you can still get in on the Print and Play backer level. Learn more about this compact strategy game here on Kickstarter.

Besides having a catchy Saturday morning cartoon-style theme song, Masters of Mutanite is a neat take on deck-building. In the game, players are mutants fighting each other to see who will be the last one standing. The battleground is a randomly created city filled with objects like cars, telephone poles, and trees (all of which can become deadly weapons in the hands of the mutants). Each mutant has unique trait cards and a hand of power cards. As you play you can add to your hand by picking up power cards from the different zones in the city. You’ll move around the zones, and use your power cards to fight opponents with a variety of attacks while picking up Mutanite tokens which will allow you to add new trait cards to your mutant. Once all but one player or team are knocked out, the survivors win. 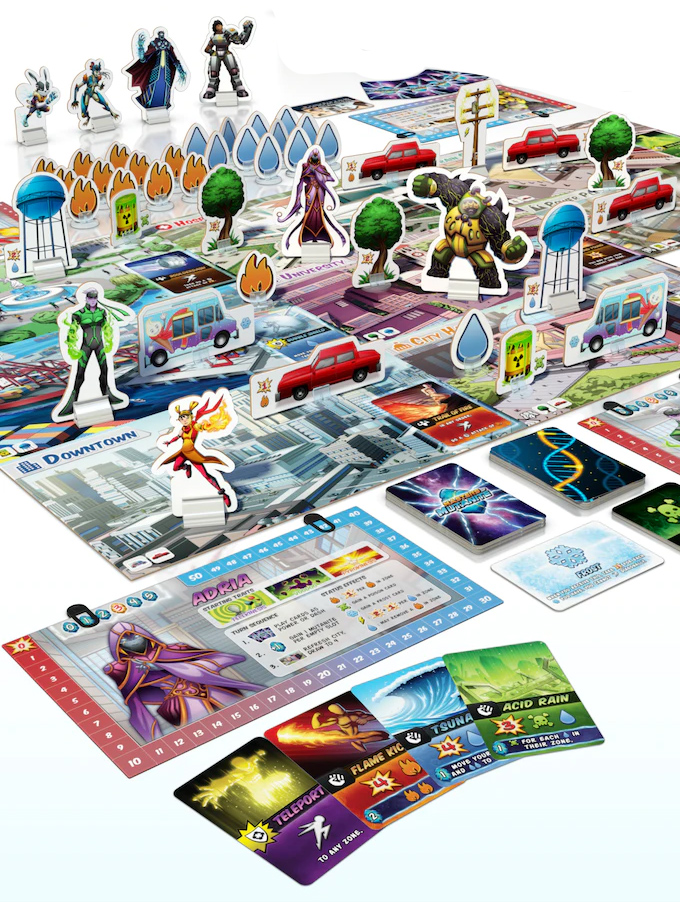 I’m not a fan of elimination games, but if you like that style of game there is a lot of exciting stuff going on in Masters of Mutanite. I really like that the mutants can fling objects from the environment around and that those objects can cause elemental effects such as fire, electricity, or water damage. It gives the feeling of being in a big action movie where the superpowered characters are really wrecking havoc.  I also like that there is a spatial element to the deck building aspect. This encourages clashes between mutants when valuable power cards are revealed on locations. Masters of Mutanite looks like it really captures that all-out, high-powered brawl feel that this theme calls for. Check it out now on Kickstarter here.

Skate is a hand-management game where players must try to land five tricks before their opponents. At the beginning of each round a goal trick card will be flipped over and each player will take 1 action per turn to try to match the foot icons displayed on the card to claim it. In your hand you will have 2 cards. On your turn you can take 1 action. This can be to place a card in front of you or discard a card and draw a new one or to remove a players placed card. Once you match the two foot cards to the trick, you win it so you’ll need to churn through the deck to gain the foot cards you need, but there is a push-your-luck element to the game. Shuffled into the deck are Eat Pavement cards and if you ever have 2 of these in your hand you must immediately discard your hand as well as any foot cards you have placed. Gnarly cards can act as wild cards or can cancel out Eat Pavement cards. There are also rail cards which can double your trick points if you manage to complete them.

Skate is visually exciting and has some interesting mechanics. I’ll be curious to see how it plays overall, but its intrigued me enough to want to see more. Land you own tricks by checking out Skate on Kickstarter here.

Runes of Zun is a head to head battling card game for 2-4 players. On your turn you can play action cards to target players and add in any modifier cards that match the symbols on the action card. Your targets can defend using reaction cards. Each card can be played on anyone including yourself so some cards that might hurt your opponents could instead benefit you. It’s all about when and who you play your cards on. 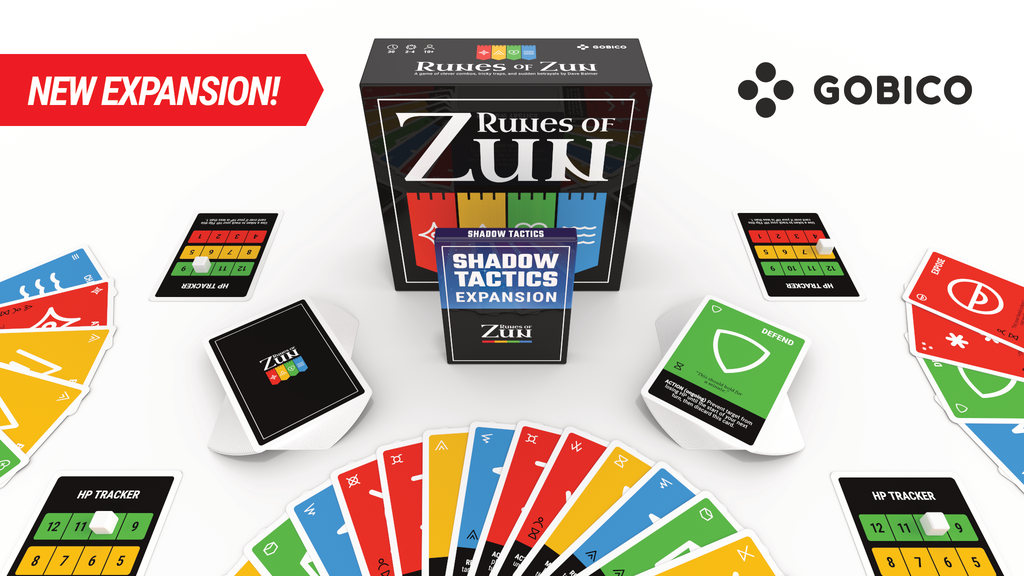 This Kickstarter is for a reprint of the base game plus and all new expansion. The Shadow Tactics Expansion adds new action and reaction types such as Curses which do damage over time but can be transferred to anyone who targets you, Misdirects which let you shunt the consequences of an action card onto another player, or Fizzles which stop an action card and make the targeting player discard a card. Runes of Zun is a bright, easy-entry battle game and the new expansion looks like it adds a lot of new strategies. Learn more about it on Kickstarter here.