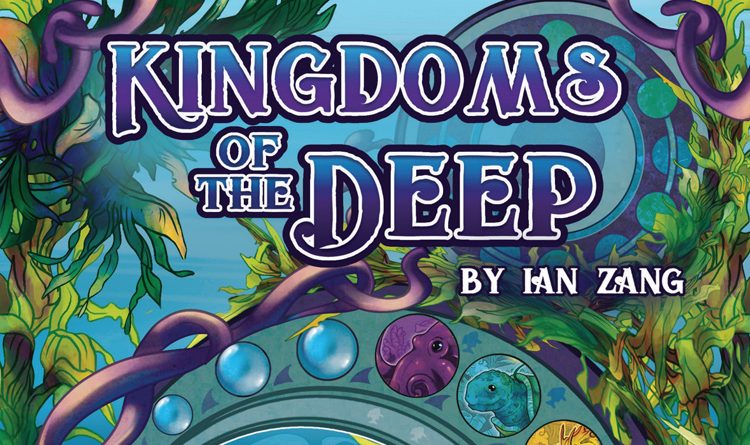 Kingdoms of the Deep is a savage, shark-eat-everything area control game set in the depths of the ocean.

Kingdoms of the Deep, the latest game from designer Ian Zang and publisher Galactic Raptor Games, has made a splash upon the shores of Kickstarter!  Thematically and artistically linked to Animal Kingdoms (a game we absolutely recommend), Kingdoms of the Deep is an area control game where players will vie to influence underwater territories in order to score points and secure victory for their faction.

Jess
Or you could just send sharks to eat them! 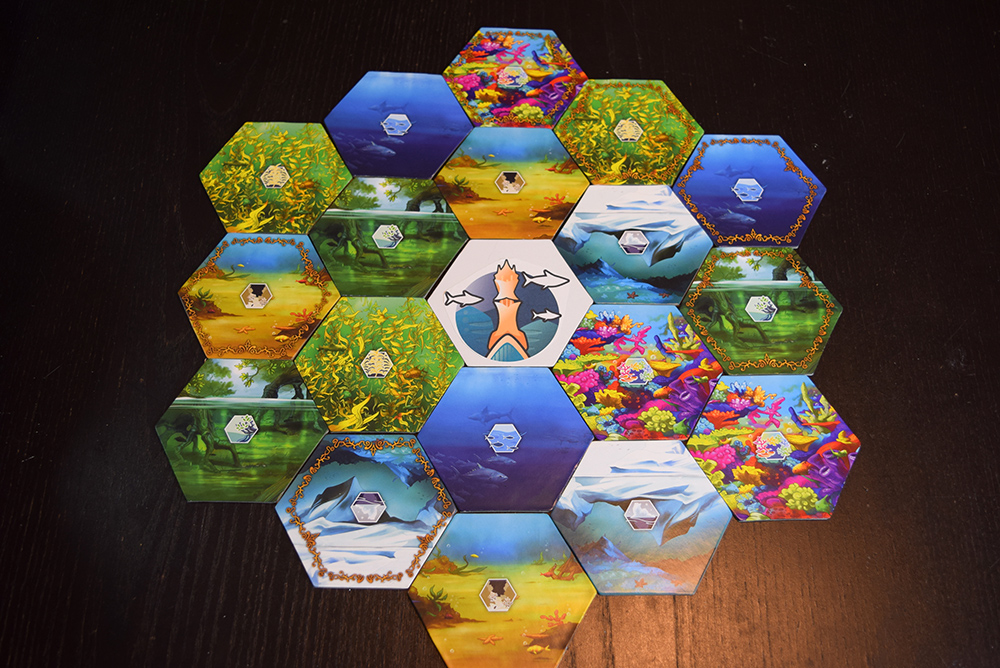 The gameplay in Kingdoms of the Deep is driven by a simultaneous action-selection mechanism that keeps the flow of the game quick and percussive, and since the actions you take are affected by the actions of your opponents, it’s critical you keep an eye on their potential strategies along with your own in order to dominate the sea floor and score yourself a win.  Most of the actions you can take involve adding or moving your influence markers around the randomly-generated hexagonal grid of the underwater board.  This grid is composed of various terrain types, as well as ‘capital’ tiles of each terrain type, and strategically controlling these tiles will score points during each of the game’s 3 scoring rounds.

Jess
And so that you’ve got time to send sharks to eat your opponents’ pieces.

Andrew
You scare me sometimes. 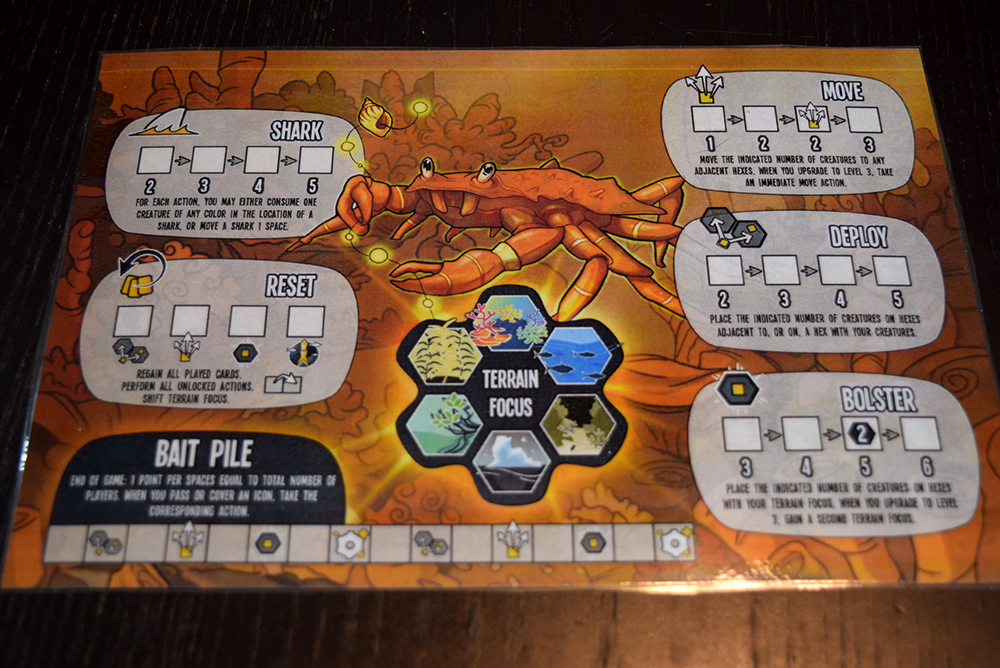 Each action players can take are more powerful if only one player takes them, so you’ll definitely want to try and predict what others are going to be doing so that you can maximize the effect of your actions (or disrupt those of your opponents).  Players have identical actions to choose from, but once an action is taken, it can’t be used again until that player uses the Reset action to recall all their previously-played actions.

Jess
Aside from my beloved Shark action, I think the fact that the Move action lets you manipulate any player’s units is really interesting. And potentially *very* mean!

Andrew
Absolutely, yeah. Kingdoms of the Deep has a lot of potential for messing with your opponents, and disrupting their positioning just ahead of a scoring round can be downright brutal.

Jess
Yep! But since you can only use each action once per round, you aren’t going to get caught in a loop of players endlessly fiddling around with each other’s pieces.

Every time at least one player uses the Reset action, it advances the round marker, so you never really know exactly how many actions you’ll have before a given scoring round or the endgame.  Scoring opportunities are randomly determined at the beginning of the game, and include controlling certain shapes of tiles on the board as well as having specific numbers of units out during scoring rounds. 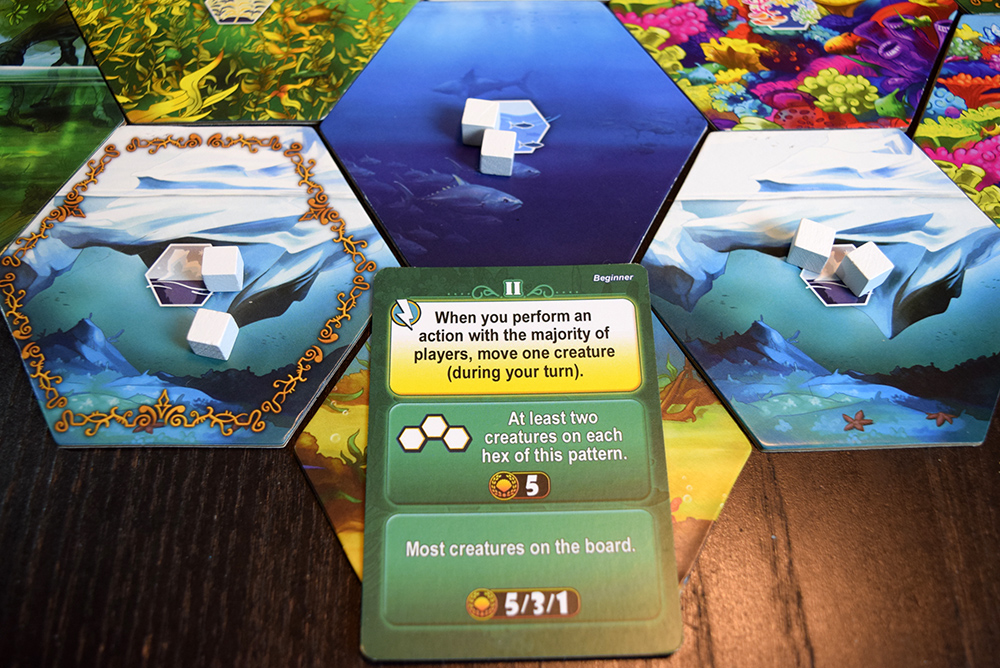 Another scoring opportunity that is always in play is control over the Atlantis tile.  Uniquely, when units go to the center of the board, they are permanently moved into the Castle (simulated in our prototype by a black bag).  At the end of the game, whoever has more units in Atlantis gets a windfall of points, but each time a unit is put in there during the game, the player that did the moving also gets a point.

Andrew
Which means that I could use my move action to dump *your* pieces into Atlantis, getting points and disrupting your control formations at the same time!…

Jess
…But do that too much and you’ll be handing me Atlantis points at the end of the game.

If you haven’t picked up on it yet, Kingdoms of the Deep is a toothy, confrontational game, perfectly in line with the fact that there are literal sharks wandering around the board eating player pieces.  There are a lot of ways of messing with each other, and you’ll absolutely have to take advantage of them if you’re going to survive down here.  And ultimately, whether Kingdoms of the Deep is going to be a game for you is really dependent on how much you’re going to enjoy that.

Andrew
For me, the best parts of Kingdoms of the Deep were definitely its action selection core. I love the head-game of trying to take an action at just the right time, not so soon that you can’t react to what your opponents are doing that round but not too late that someone manages to rush the round end and mess with you a bit.

Jess
That was awesome, yeah! I also just really like the challenge of moving your units into place in such a way that your formations can’t be disrupted before you get to score. I love the puzzle aspect of the gameplay that keeps you constantly thinking about not just how you’re positioning yourself but how everyone else is, too.

Andrew
And the sharks.

Kingdoms of the Deep is up on Kickstarter right now, swimming strongly towards its funding goal.  If you’d like to learn more about this underwater struggle for spatial supremacy, check out the link below! 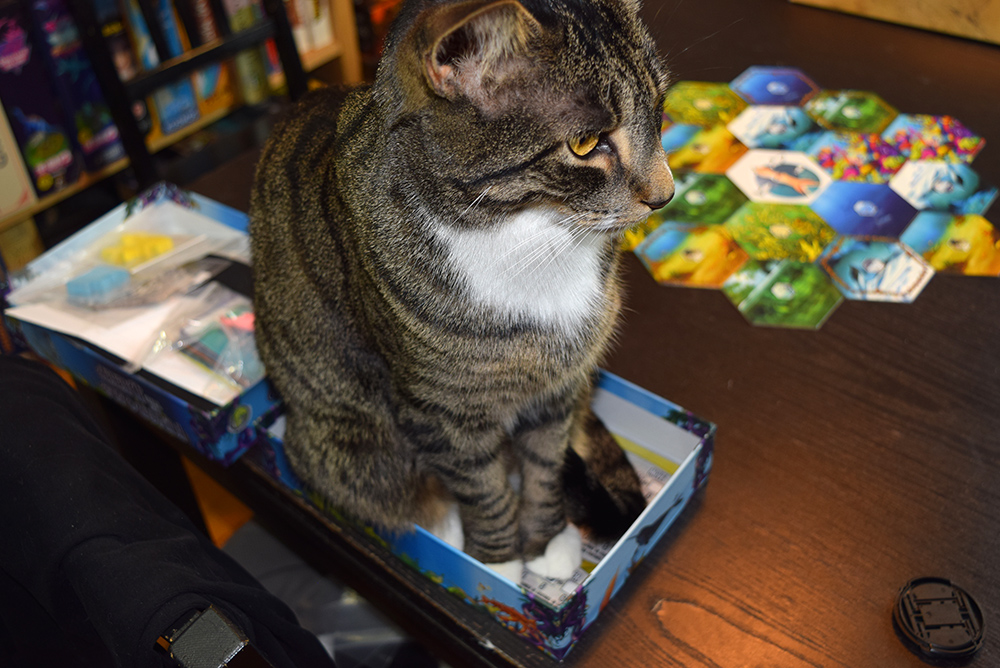