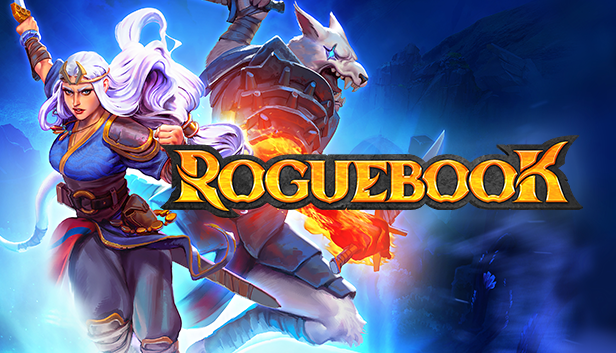 Deckbuilding adventure games have become all the rage in recent years. Now NACON and Abrakam Entertainment have created their own take on the deckbuilding genre with Roguebook, an adventure where heroes form teams and fight monsters inside a cursed book that is wreaking havoc on the world!

Jess
I recently got a chance to preview Roguebook and I have to say I’m pretty excited by it. Co-designed by Richard Garfield, the creator of Magic: The Gathering™, Roguebook has a similar feel to games like Slay the Spire and Darkest Dungeon while still maintaining its own unique feel. 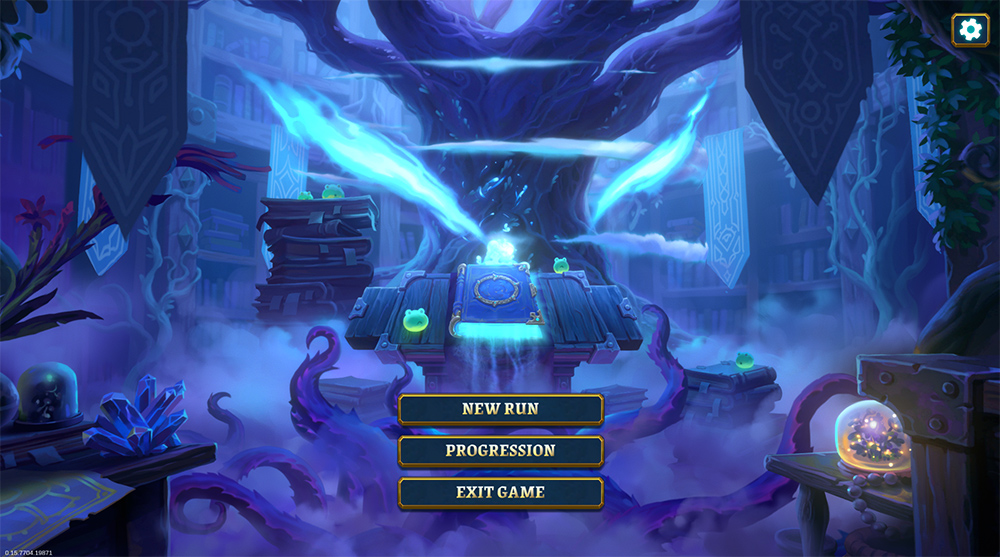 In Roguebook, the players are heroes trying to survive battle after battle with monsters inside an evil magic book.  While the premise is simple, the game provides a decent level of complexity, giving you plenty to consider each time you play. For example, there are four different heroes to choose from and you get to take two with you on every adventure. That means there are a lot of different combos to try out and it’s be fun learning which pairs are your favorites. 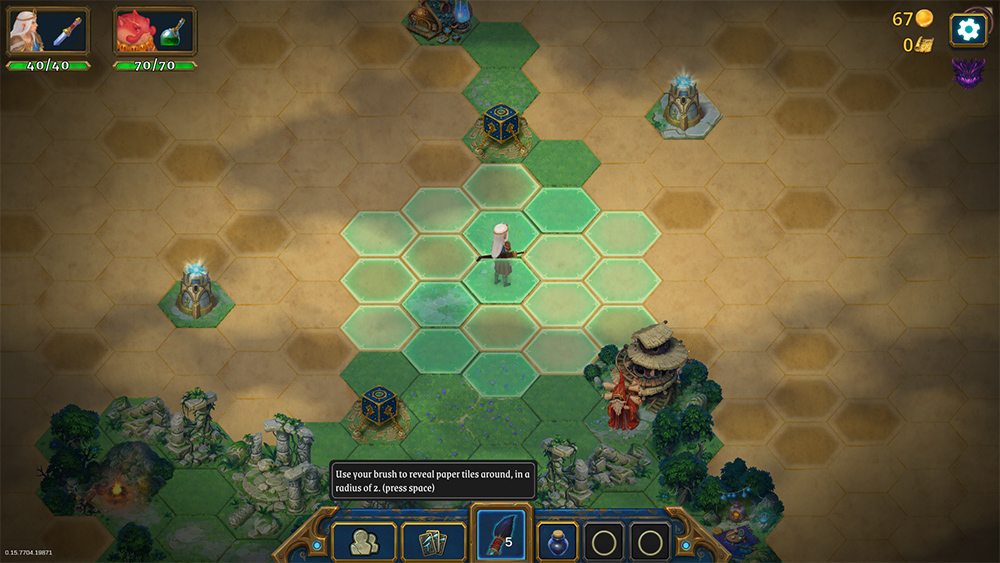 Once you’ve picked out your team, you’re released into the main map, much of which is obscured. Each map represents a page in the book and to explore these pages you need to expend ink and paint brushes to flip over hex tiles and reveal surprises like coins, monsters, and gems. These resources are extremely limited, so you have to be very strategic in where you choose to explore and what tools you use to do so. I often found that I ran out of brushes and ink long before I could completely uncover the map and it left me wondering what kinds of treasures and beasties I had missed out on. 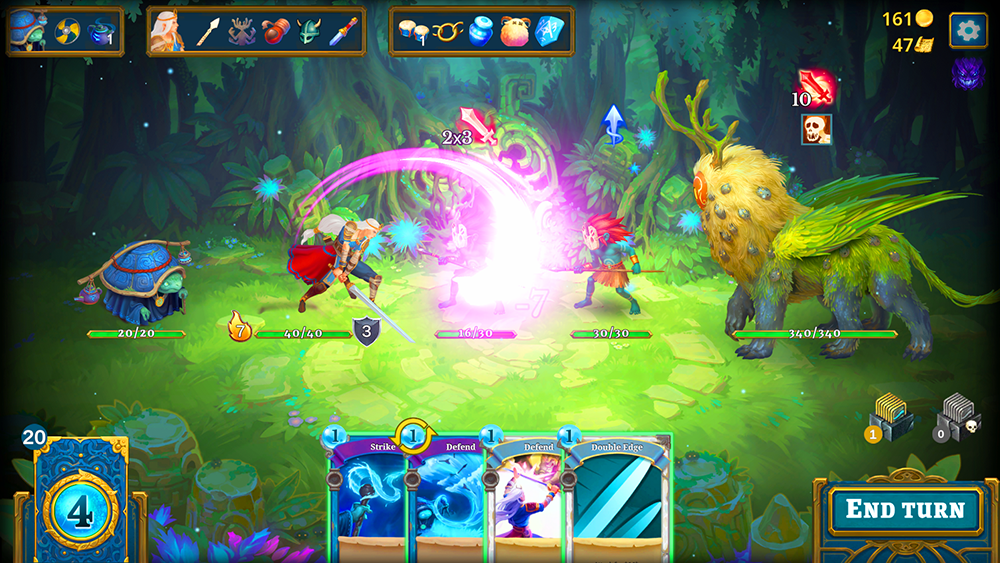 While moving around, you’ll get a top down perspective, but once you start a monster encounter the game switches to a more classic combat side-view, with your characters on the left and the monsters on the right. Similar to games like Darkest Dungeon, the marching order of your heroes is important and will factor into your strategy. The leading character will be taking the hits and occasionally some of your powers might only activate if a character is in a certain position. For example, the dragonslayer does more damage if she is in front, whereas the half-ogre gains more defense if he leads. So with some good timing you can take advantage of both character’s abilities by switching them around mid-combat. 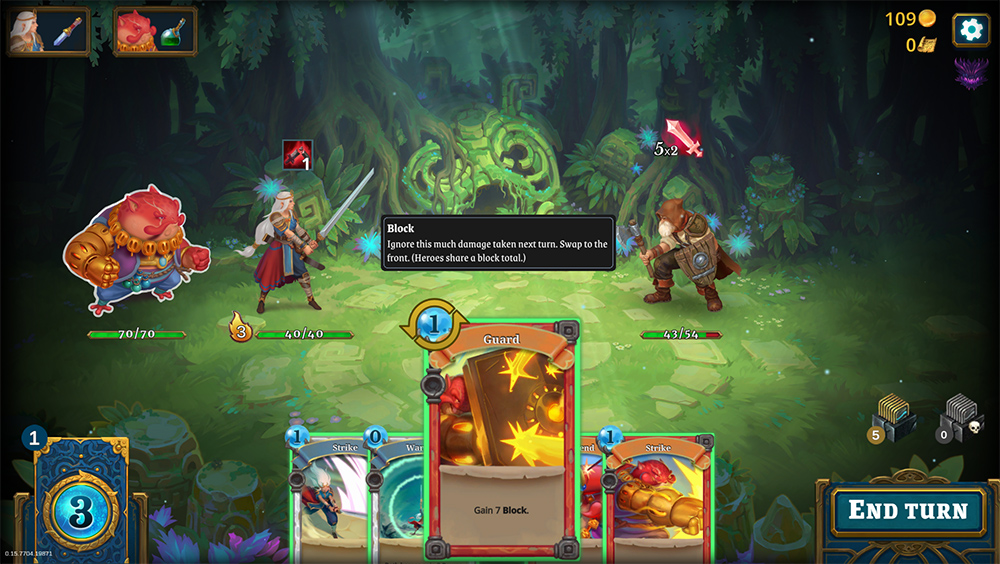 While the characters on your team have separate health bars, they share their block pool, which is really nice when you’ve built up a big shield on your lead character but want to switch positions to activate an ability or use the other character’s attack. You can also protect wounded characters this way while still being able to use them in combat.  If one character falls in battle, the other can spend actions to resurrect them, but bringing them back takes 3 precious actions and death also adds wound cards into your deck, which just take up room and are unplayable.  So whenever you can, keep both your heroes up and healthy! 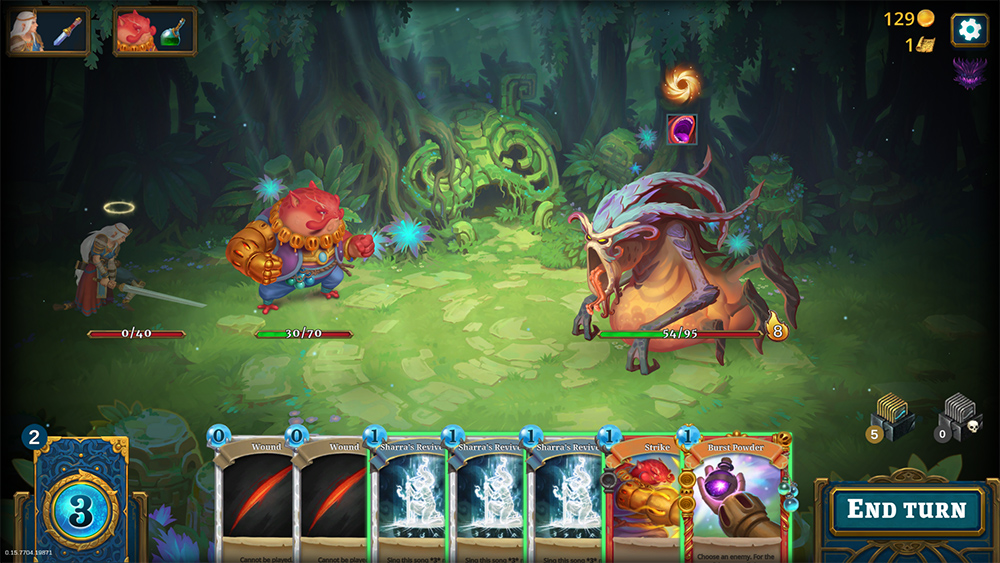 Monsters display their intended moves each turn, giving you time to contemplate your strategy and adjust to theirs. If the baddies are ready to attack, you can focus on defense whereas if you’ve caught them napping, you can lay into them with abandon! Of course, all of that will be dependent on what cards you’ve drawn that turn. 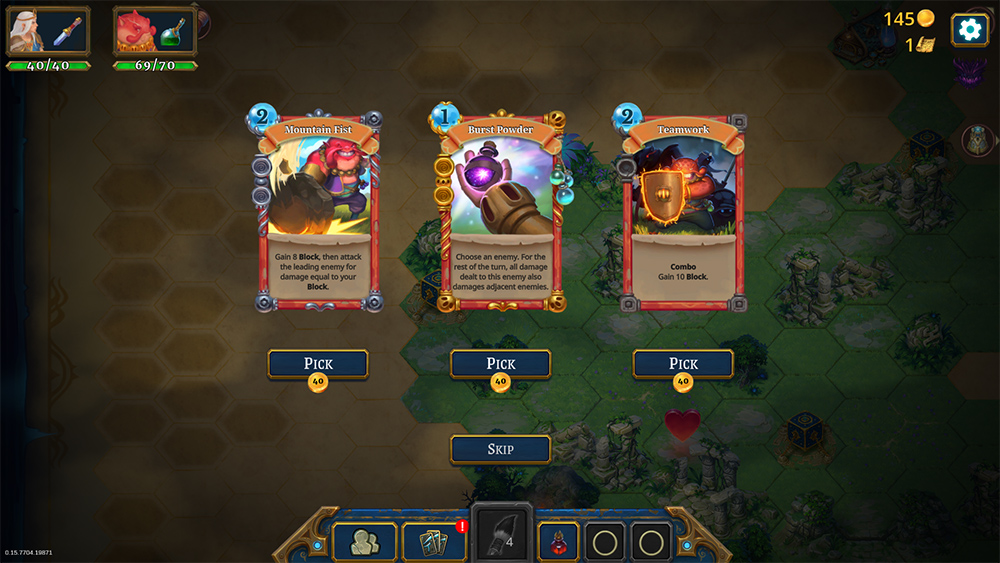 Each hero has their own decks, and the two heroes you choose will have their decks shuffled together when you start. You can add cards to your deck and, unlike other deckbuilders, Roguebook really wants you to build your deck as big as possible. You can’t trim your deck down, so it’s really important to carefully consider what cards you add in. Each card is really tempting as they are all very powerful and many cards synergize your team’s abilities. I really liked experimenting with the different combinations and trying out alternate strategies each game. 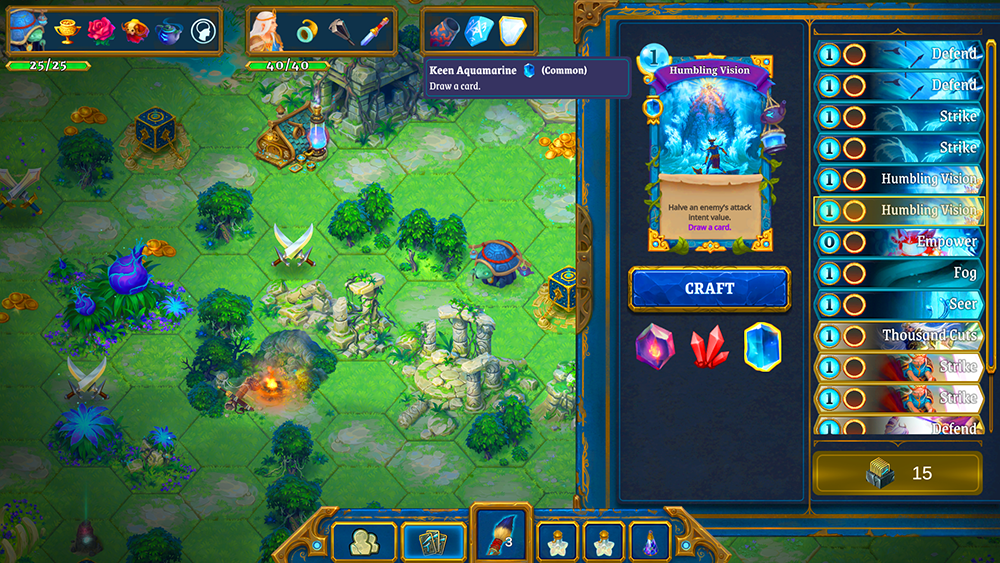 During the game, you’ll come across gems that can enhance cards and scraps of paper that can be spent in the skill tree to unlock new abilities and bonuses. The skill tree bonuses continue across all of your runs, so you get to feel a sense of progression even as you fail to beat the boss (and that will happen A LOT). In my experience Roguebook was challenging. Since I couldn’t explore the whole of the map with the limited resources I started with, I also couldn’t collect each and every bonus to boost myself for the final fight. Recovering from injury is also really tough – you can only heal using hearts that are hidden on the map and if you don’t find them, then you’re outta luck. And even if you do make it to the boss, you’d better hope that you’ve built yourself a powerful deck or else you’ll get overwhelmed pretty quickly.  But despite this, I didn’t find Roguebook frustrating, and the variety of card combos made it easy to get excited about starting up my next run.

Jess
Roguebook manages to feel familiar yet innovative. While I only had access to two characters during my preview, I still had a lot to experiment with and I had a lot of fun with the demo. If you are looking for a challenging rogue-like game with card drafting and deck building baked in, then make sure to check out Roguebook on Steam. It comes out June 24th 2021, but you can pre-purchase the game to gain access to the demo and get 4 hero skins when the game releases.