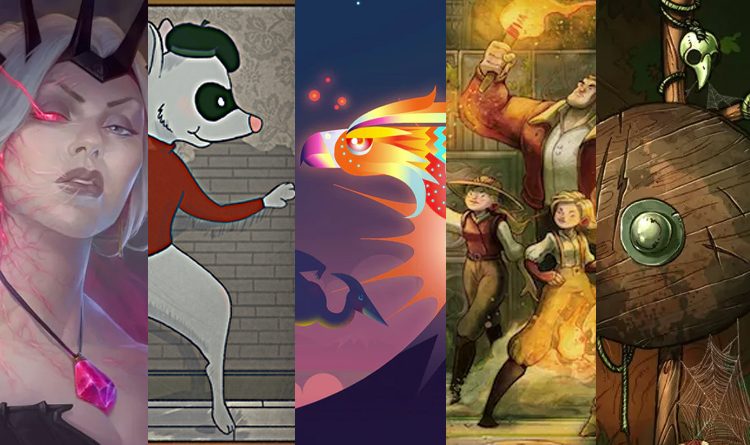 Jess
It’s finally Friday! Let’s celebrate by seeing what sort of Kickstarters are catching my eye this week!

Bloodstone is an arena battle game where players take on the roles of fighters trapped in an endless battle. Fight against each other in PVP or cooperate with your foes to overcome the gauntlet’s challenges and perhaps find your way to freedom. The game is dice-driven and each player will start with 3 in their pool, but as you play you’ll have chances to add to it, building up your power base. Each turn the players will secretly select initiative cards which will tell them the order for the round, but will give them different abilities as well. Once initiative is set, you’ll roll your dice and use them to take actions like moving, attacking, and activating abilities and fight your foes to the bitter end. 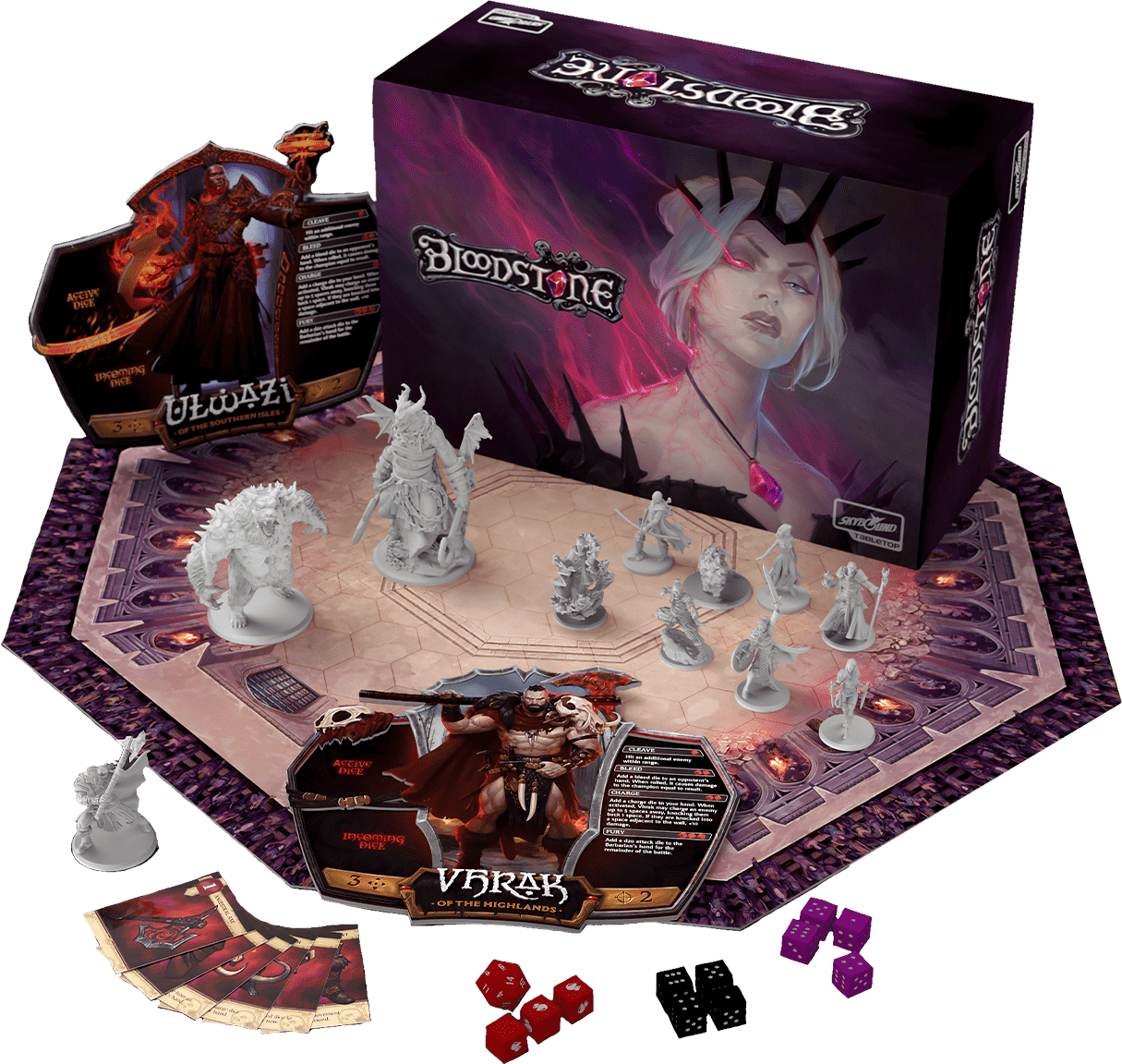 Bloodstone has some interesting twists to it. I like that, even though the game is luck driven, any time you roll less than 10 damage you can take an upgrade card that will be added to your character for the rest of the match. This means you won’t fall behind just because of a few bad rolls. I also love that there is a cooperative mode where the players face off against boss monsters in different scenarios. Also as you defeat these challenges or each other you’ll mark off your victories on the character’s progression tracks.  When they reach a milestone they get upgrades to their characters for future games. This gives a sense of progression and encourages repeated plays. If you like PVP style games with fun minis and lots of dice rolling then make sure to check out Bloodstone on Kickstarter here.

Mouse Cheese Cat Cucumber is an asymmetric, tile placement game with hidden roles. Each player will draw a character with a unique goal: The mouse wants the cheese, the cat wants the mouse, the cucumber wants to trap everyone, and the cheese is happy to have everyone get a long. To play, everyone will be adding tiles to the map, trying to build it in such a way as to fulfill their goals. On your turn you will select a card from the Conveyor Belt to add to the Maze. Where you place can move other rooms and characters so a clever play can shift things in your favor, but you have to be careful that your move doesn’t give away your identity!

Beasts of Balance is a dexterity game with a digital component that brings the game to life. Each turn players will pick a piece, scan it, and then add it to the tower. When you scan one of the chunky pieces it sends info to the app that plays out what happens. For example, when you add animals they can combine into new creatures and by adding elements you can power up your creatures. The game is fun, but the real stars of the show are the components. The creature pieces are elegant in a blocky and stylized design and now you can get even more of them! Modern Games is Kickstarting a new expansion that adds new legendary creatures such as the phoenix and T-Rex. You can also add-on other smaller expansions such as the Ghost Crab or Hungry Dragon. 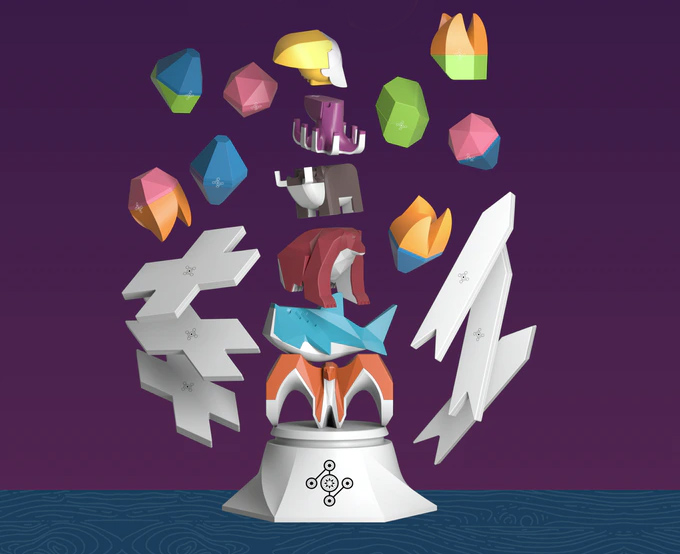 You can see our original review of Beasts of Balance here. While the gameplay itself didn’t capture us,  we really liked the design and I think it’s great for younger kids. If you like really tactile games that can be enjoyed by players of all ages should take a look at the Beasts of Balance: Rebirth campaign here.

Block and Key is a puzzle adventure game where you’ll be trying to claim keys to the ruins to score points by assembling blocks to match their designs. Each turn you’ll decide if you will draw new blocks from the supply or add 1 block to the ruin. If you add a block and it completes a design on one of your goal cards, you can score the card. The twist here is that the design must be facing your viewpoint.  This makes for a very interesting game as every block placed adds more pieces to each player’s perspective. You can be aiding or hindering your opponents without even realizing it. The game ends once 1 player has claimed a set number of keys. Everyone has one last turn and then the player with the most points wins! 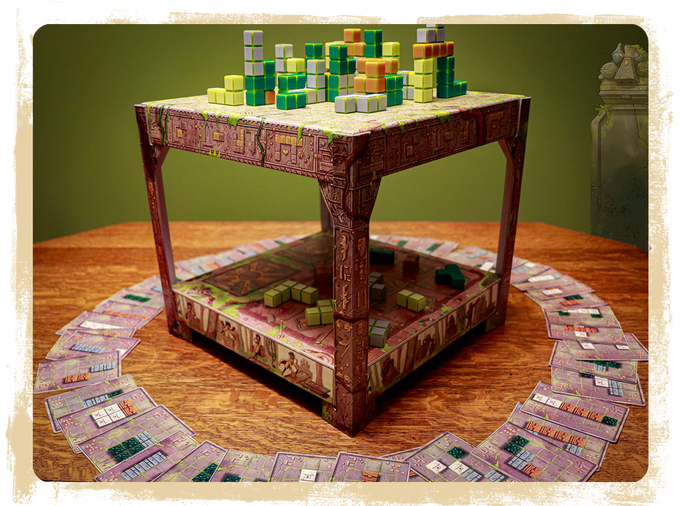 I like puzzley games and Block and Key is pretty unique in it’s 3 dimensional nature. Not only are you adding blocks to build up patterns, but you’re also having to figure out ways to place so that you don’t give your opponents exactly what they need. As the ruins build out you’ll have more and more opportunities to score cards and it is possible to score more than one in a turn, so planning out your placements is crucial. Block and Key has the potential to be a bit brain-burny, but if you like strategic puzzle games then definitely visit the Kickstarter here.

The Forest of Radgost is a storytelling game about a village and the terrible forest it dwells near. In the game, children from the village have gotten lost in the forest and the villagers must venture in to rescue them. Players take on the roles of the children and the villagers trying to save them and must try to escape the forest. During the day phase, you will roll the dice and move your character. If you land on a creature token you will have an encounter. If not, then you’ll have a chance to explore, which lets you draw a card that will tell you a bit of story and may give you something beneficial. During the night, creatures will awaken and may attack the villagers. If the villagers and the children manage to make it back to the village you win, but if any you are not in the village by the beginning of night 3 everyone loses the game. 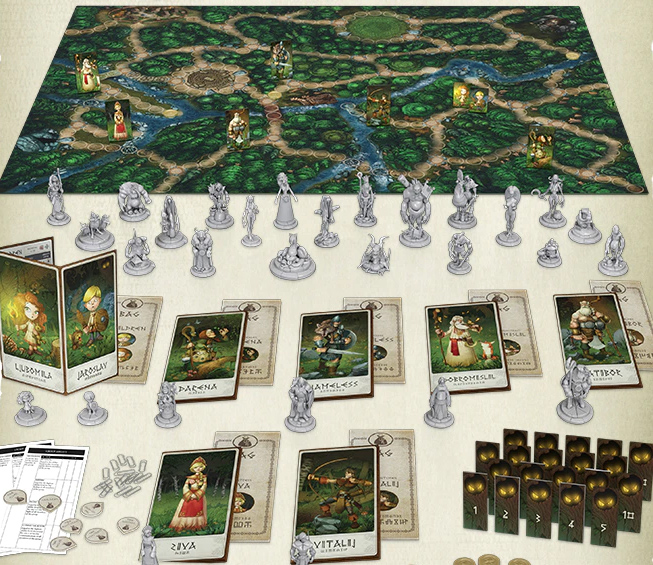 The Forest of Radgost sounds a little spooky and has a lot going on within it. The encounters book has 92 pages lore about the monsters and of stories that will happen throughout the game. One other thing that stands out in the game is that, because of the way it plays, anyone can jump into the game at anytime, so if your friend shows up late to game night, they can still join in the fun. Learn more about The Forest of Radgost here on Kickstarter.