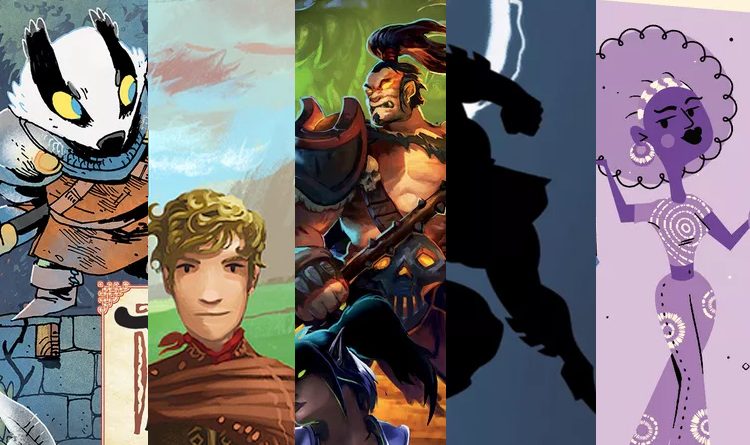 Jess
Hello Friday Fans! Let’s get this weekend started with some fun Kickstarter projects shall we?

I am not a war gamer. I don’t particularly enjoy games where you have to attack other players, so it makes no sense that i like Root and yet I do. I think it has a lot to do with the fact that you can win in a variety of ways because each faction has different play styles. Being a root aficionado, I am excited to see that Leder Games is Kickstarting a new expansion: The Marauders. It adds two new factions The Keepers of Iron, who are searching for ancient relics and wear armor, and the Lord of Hundreds, who can create mobs that will burn and loot enemy locations. As part of the project they are also offering the Riverfolk hirelings which add new characters to the game. 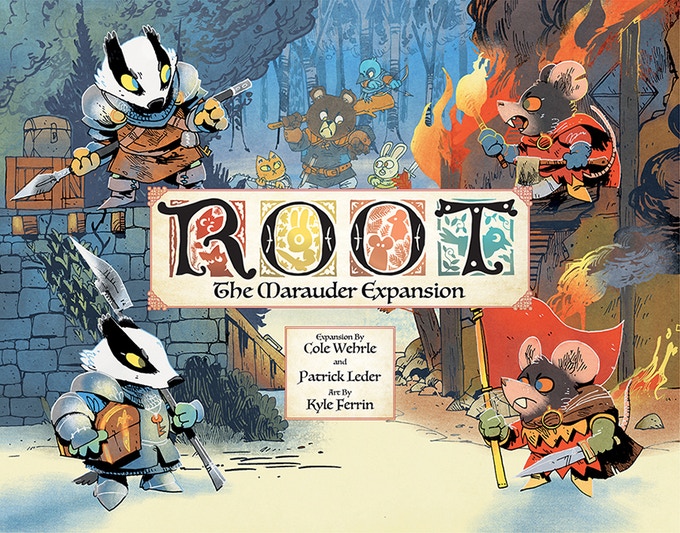 As I said before, Root is the war game for people who don’t enjoy war games and this expansion gives you even more opportunities to play your own way in the game. I highly recommend Root and all its expansions so go visit the The Marauder Expansion Kickstarter here to learn more.

I have been a Red Raven Games fan for a long time now. Ryan and Malorie Laukat are a talented team who produce beautiful, fun games and now we have a chance to learn more about their process through the Crafting Arzium documentary feature film. The film does a deep dive into the world of Arzium in which most of Red Ravens Games are set. The campaign is raising funds to shoot the last few scenes and o cover post processing on the film. 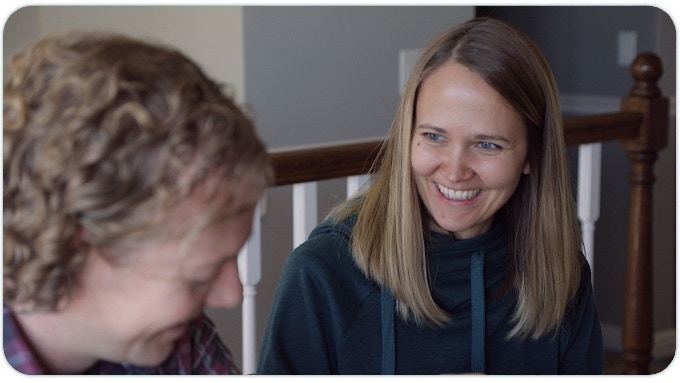 I have loved the few documentaries I’ve seen about the board game industry. They give such great insight on how games are made and can be a great resource for those looking to get into board game design. Head on over to the Crafting Arzium Kickstarter here to learn more.

After conquering galaxies, dinosaurs, zombies, and more, it was only a matter of time before the Tiny Epic series ventured into dungeons. Tiny Epic Dungeons is a cooperative game where players take on the roles of heroes pick their way through a room after room in order to face the Dungeon Boss. While exploring the dungeon you’ll be flipping tiles to discover monsters, trap, and treasure and once you’ve cleared the dungeon you fight against one of the 6 boss monsters. 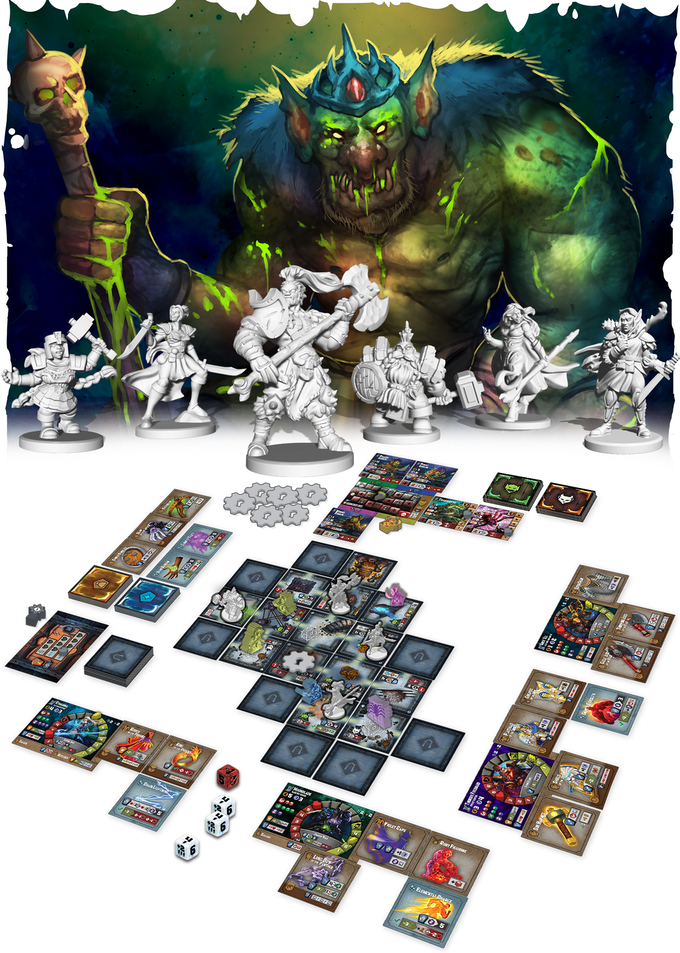 Tiny Epic Dungeons incorporates an interesting mechanic where the players must take care not to let your torch burn out because at certain levels some effects will trigger such as all of the enemies activating and if the torch ever runs out the game ends immediately. As always, it looks like Gamelyn has packed just about as much into this game as can possibly fit, with minis, tokens, player boards, dungeon cards, and more. You can also add-on deluxe options to make sure your box of Tiny Epic Dungeons is bursting at the seams with fun. If you like small box games with a lot packed into them and tense dungeon crawlers then make sure to check out Tiny Epic Dungeons on Kickstarter here.

Most solitaire games I’ve come across have been small, compact experiences. They’re more often than not pocket sized and designed to be enjoyed over a short period of time. Batman is anything but. The solitaire Batman: The Dark Knight Returns Board Game looks to be a full-on, big board, minis-laden (deluxe version only) experience. In the game, you play as Bruce wayne doing his usual thing: Beating up bad guys and sending them to Arkham as the Batman. The game can be played as one shots or in the campaign mode where the consequences of your games carry on to the next time you play. You face all of Bat’s old foes like Two Face, Joker, and even Superman!

With this one, I like the idea that one of the mechanics has you picking ability cards to add to your deck, but the cards you don’t pick have special events that join the event deck. So when you’re deciding what to choose you have to factor in what you want to be facing in the future as well. It sounds like it will be devilishly hard to choose. The game looks really beefy and the deluxe edition looks so gorgeous it’s almost a shame its a solo game as you’ll want to show it off to your friends. You can learn all about the Batman: The Dark Knight Returns Board Game here on Kickstarter.

In CULTivate you get to run your very own cult! You’ll need to recruit followers and keep your enemies at bay lest they alert the authorities to your nefarious plans. During the game you’ll be trying to collect specific meeple types that match the pattern on your character’s agenda. You’ll play cards from your hand to take actions such as recruiting, moving your followers around your board, and sabotaging your enemies. 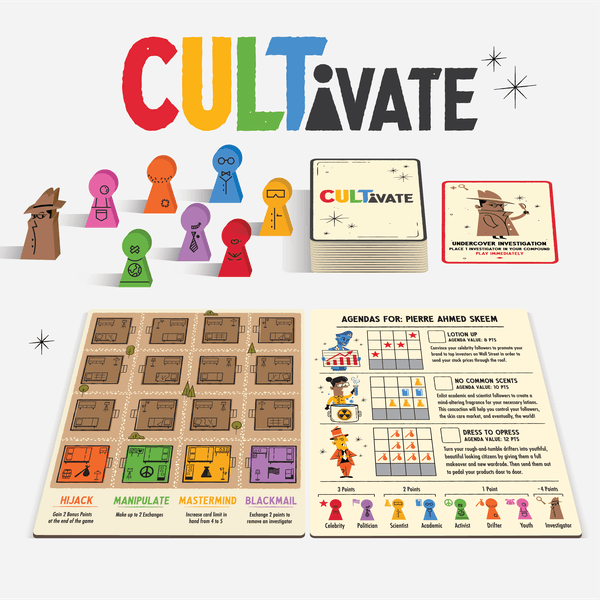 I love the retro art design of CULTivate and it looks like it has a puzzley feel mixed with a little take that to give it a bit of a vicious bite that seems appropriate to the theme. You can join the CULTivate followers by heading over the its Kickstarter campaign here.