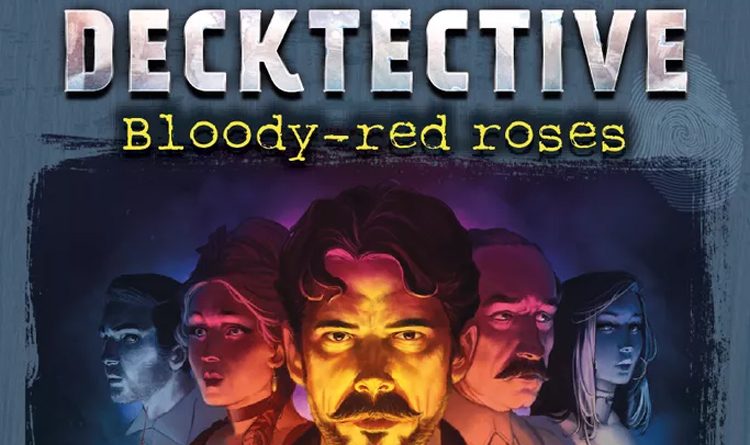 
The Decktective series feels like games made especially for me.  When I was young I got a collection of Sherlock Holmes stories and, being an impressionable child, I spent the next decade of my life thinking I would grow up to become a detective. I fell in love with incorrigibly quirky sleuth and mysteries in general, so games that incorporate puzzles and whodunits often turn out to be some of my favorites. Decktective: Bloody-Red Roses takes the excitement of solving a case and boils it down into a streamlined game that surprised me with its ingenuity and depth. 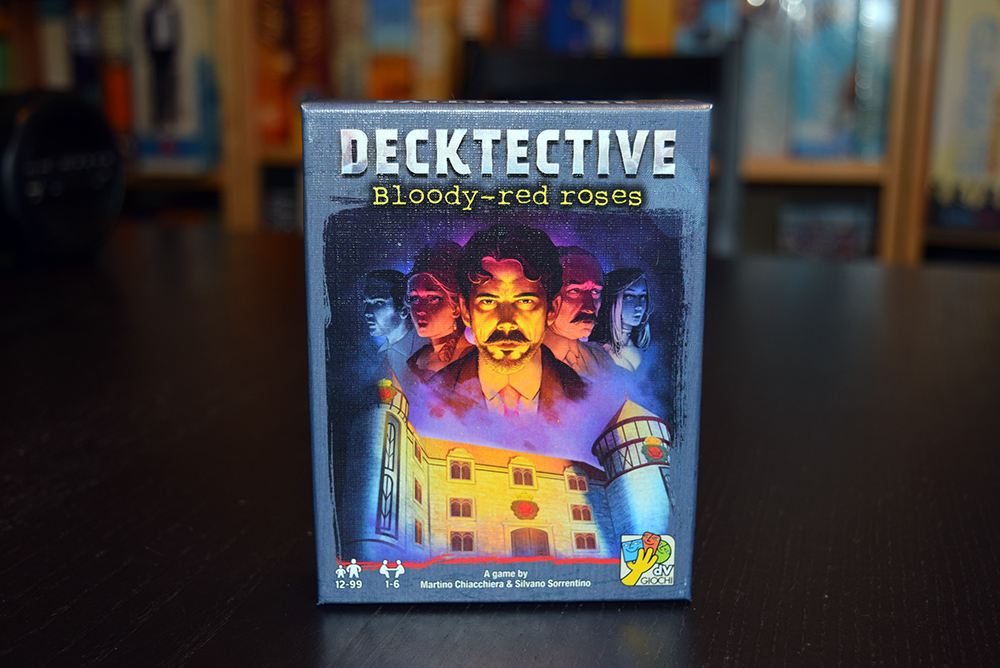 We received a copy of Decktective: Bloody-Red Roses for our consideration and were otherwise not compensated.

I’m not going to go into a lot of specifics with this review of Decktective: Bloody-Red Roses because I don’t want to ruin the mystery for you, but there is a lot to talk about here.

One evening I decided to prepare to play the game by sitting down to read the rules. I opened the box and discovered my first mystery. Where were the rules? The small box contained nothing but a baggie of clips and a sealed deck with the word “CAUTION!” emblazoned on the top card. It warned me not to look through the deck or shuffle it, but gave me no inkling as to what lay within. I resigned myself to waiting in delicious anticipation until the night when we would actually have time to play. Yes, the plastic pull tab that would unwrap the cards called to me like a siren song, but I resisted with an iron will. 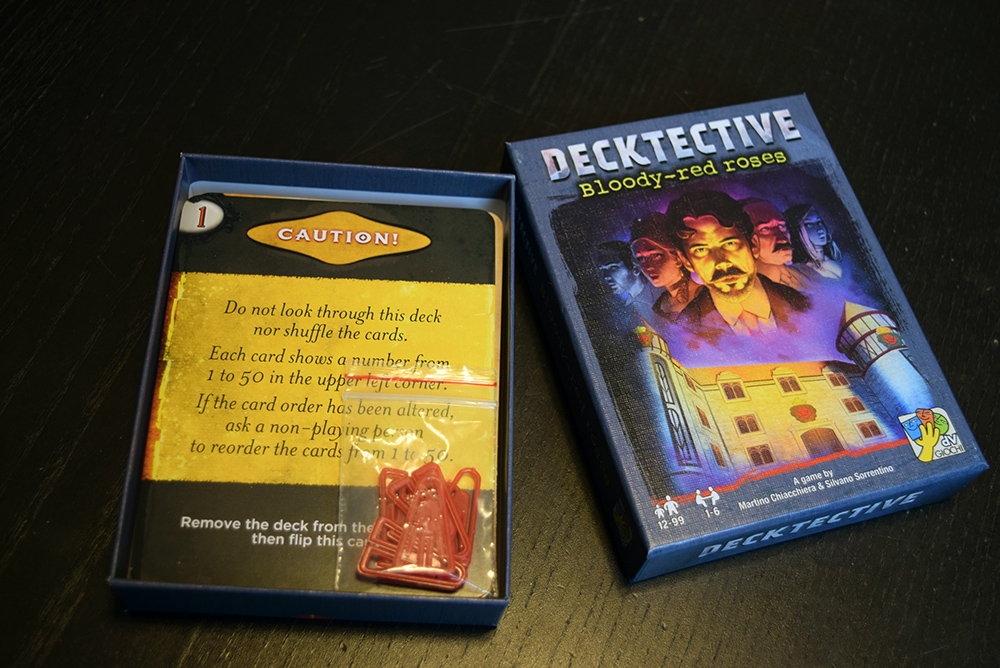 A few days later, Andrew and I assembled to crack the case. We opened the deck and flipped that first card to discover the instructions detailed within. In Decktective you must answer a set of questions at the end of the game. You don’t know what the questions will be, but you’ll learn information from the cards in the deck as you play.

The game has a unique setup that I thought at first to be a fun gimmick, but eventually learned was an important element to the game.  The game instructs you to nestle the bottom of the game box into the top and then arrange a set of cards into them to form a 3 dimensional scene. Since this is the first thing you do in the game and it was such a novel way to use the components , I figured taking a picture of the setup was important. 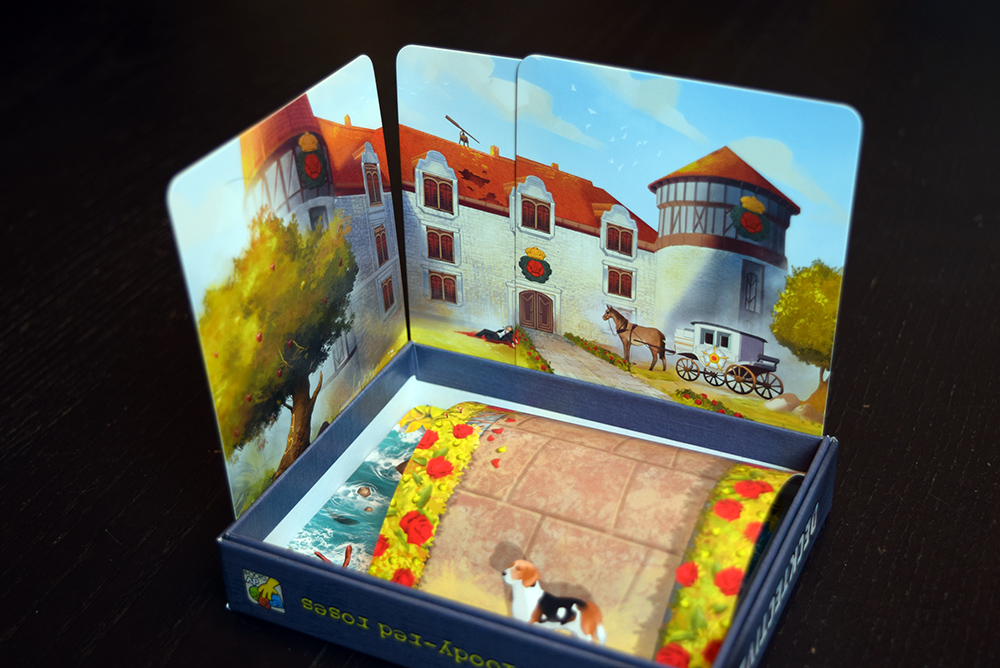 Scene set, each player will then get a hand of cards that give clues to the mystery. You may not share any information about your cards nor can you take notes, but here is one exception: You can share the titles of each card. The titles can feel vague without any context, but giving this information to your fellow player can be very important once you start playing.

On your turn you will play 1 card either face-up onto the table or face down onto the discard pile. The discard pile starts with 1 card already in it. The card is not a clue, so you don’t have to worry about missing out on any info. The cards you play have values in the upper left corner and you may only play a card face-up if its value is not higher than the amount of cards in the discard pile. This means when you start the game you can only play value 1 cards.

So how do you know what to discard?

The secret is, you don’t know. Every discard will be based on your own discretion. You must look at all the cards in your hand and those on the table and consider which cards you think are pertinent to the case and which might be red herrings. Every card could be important and only through discussion with your fellow detectives can you try to gather a sense of what you will need.

Now the interesting thing here is that at the end of the game, you can talk about anything you learned on the cards, but you cannot ever go through the discard pile. You have to rely on your own memory. This means that when deciding which cards will be placed face-up on the table, you want to consider how they will affect other player’s decisions. Eventually you’ll all be able to share the info you learned (If you can remember it), but perhaps playing a certain card will trigger another player to go “Oh I have a card that gives that one context.” or maybe “That card makes me think one I am holding can be tossed safely”.

The amazing thing here is that every card is useful and every card will get played, so you will have all the information you need to solve the case. It’s just up to your decisions, your memory, and your logical deductive skills to suss out the details you’ll need to win. At the end of the game, you’ll answer your questions and gain points for each you guess correctly.

The structure of the game necessitates that it is a one time use only experience – once you solve the case, well, you’ve solved it!…or maybe you totally botched it, of course. That said, nothing in the game is changed or destroyed and all of the cards are numbered, so it can be reset and given to a friend so that they can enjoy it as well. Decktective: Bloody-Red Roses is a compact experience; a pocket sized game that can be played in around 45 minutes. We found it to be fun and intriguing. As I mentioned before, the 3d diorama was a particularly smart gameplay element as it not only gives you a look at the scene of the crime, but also includes important details to the case. The game was challenging, but not frustrating, and it was rewarding when discovered that our answers lined up with the truth.

All in all, we really enjoyed Decktective: Bloody-Red Roses and recommend it for anyone who enjoys mysteries and logic puzzles.