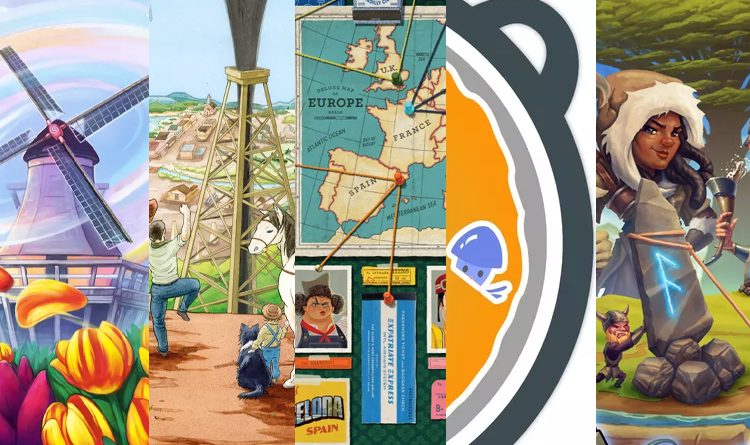 Jess
The weekend approaches! Let’s welcome in this glorious Friday with some awesome Kickstarter projects!

Gift of Tulips is a game about creating beautiful bouquets of tulips. During the game you’ll be drawing tulip cards and deciding whether to add them to your hand, gift them to other players, or add them to the Hidden showcase (which affects scoring at the end of the game). The tulips you add to your hand will score at the end of the game while the tulips you gift will get you immediate points and you cannot take the same action twice in a row, so it’s important to carefully consider where you are putting your tulips. Once the deck is empty, you’ll reveal the cards in the Showcase and award points to those with majorities in specific tulips. The player with the most points wins! 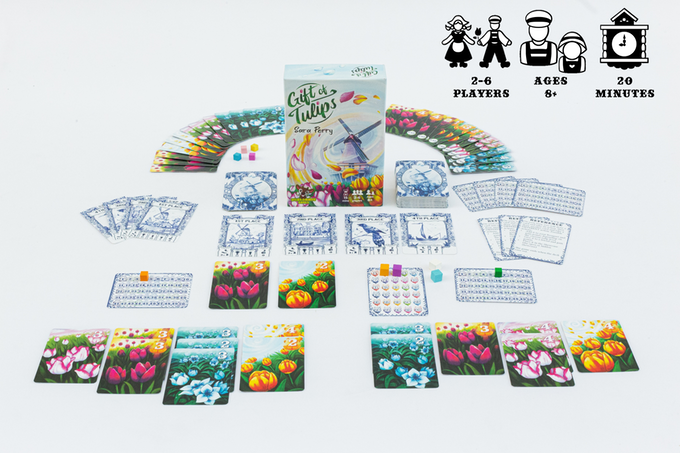 I have to say, I adore the theme of this game and the fact that it encourages gifting between players. Yes it is a competitive game and yes the gifts you give are strategic, but there is something very wholesome about the whole game that really appeals to me. If you like commodity speculation games or are just into pretty flowers, make sure to check out Gift of Tulips here on Kickstarter.

Oil Town is a dice placement game about drilling for oil in the Wild West. Each turn you will play cards to plan out your drilling and then you will roll your dice and allocate them to the cards. You want to form chains of dice whose values only have 1 value difference. Afterwards you’ll collect oil drops based on how many cards you were able to link with your chains. The player who has collected the most oil at the end of the  game ends wins! 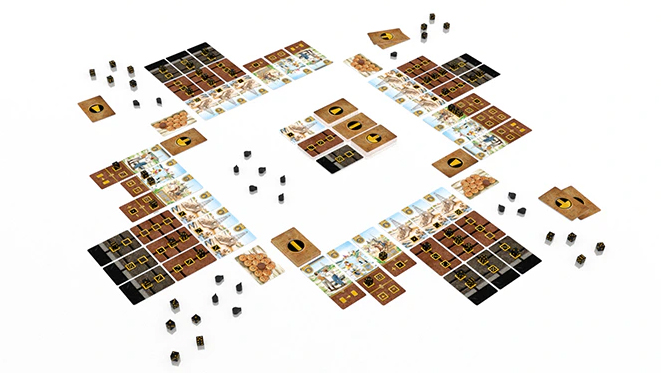 Andrew and myself have always been fans of dice placement games and the mechanic of chaining of dice together looks like a fun puzzle. You can learn more about Oil Town on Kickstarter here.

I have been continuously impressed with the quality of Keymaster’s games, both in gameplay and components, so I have high hopes for Caper: Europe. In the game you play masterminds planning fantastic capers in cities across Europe. You’ll need to draft a crew, equip them with the gear they need to pull off their crime, and send them out to get the job done. Score points by controlling locations, collecting goods, and pairing up your thieves with their favorite gear. The player with the most points after 6 rounds wins! 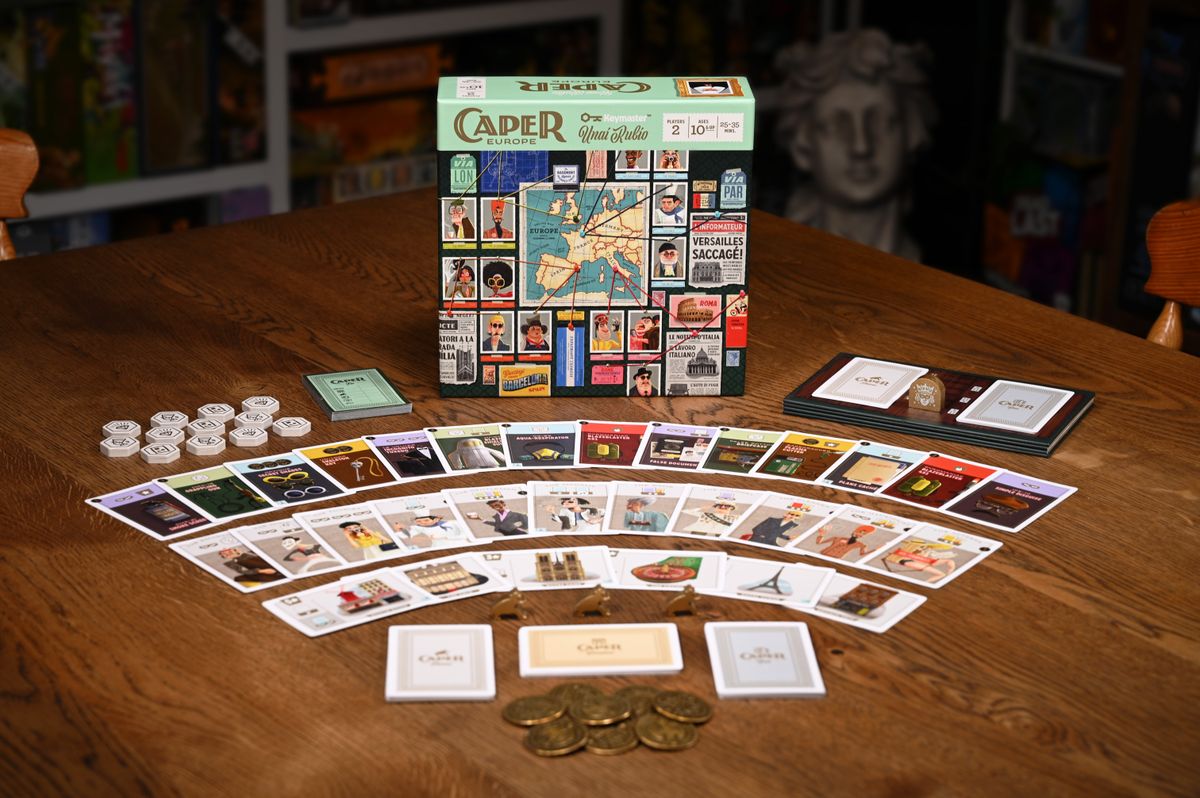 The original Caper is a ton of fun and the Europe edition has built on that base to create a more polished gameplay experience. If you love Caper or enjoy Area Control games for two players, then definitely check out Caper: Europe on Kickstarter here.

Hojo Pojo is a game about stuffing yourself full of delicious Hot Pot goodies. Each player will be trying to eat as much food as they can before the sauce runs out. on your turn you’ll use action cards to collect ingredients and cook them. Once cooked you can roll a die to see what color ingredients you can eat. Pair your food with a sauce card and add the complete dish to your scoring area. You can use booster cards make a bowl bigger and able to hold more food. Once all the sauce cards run out or someone has the King of the Pot card, the game ends and whoever has the most food wins. 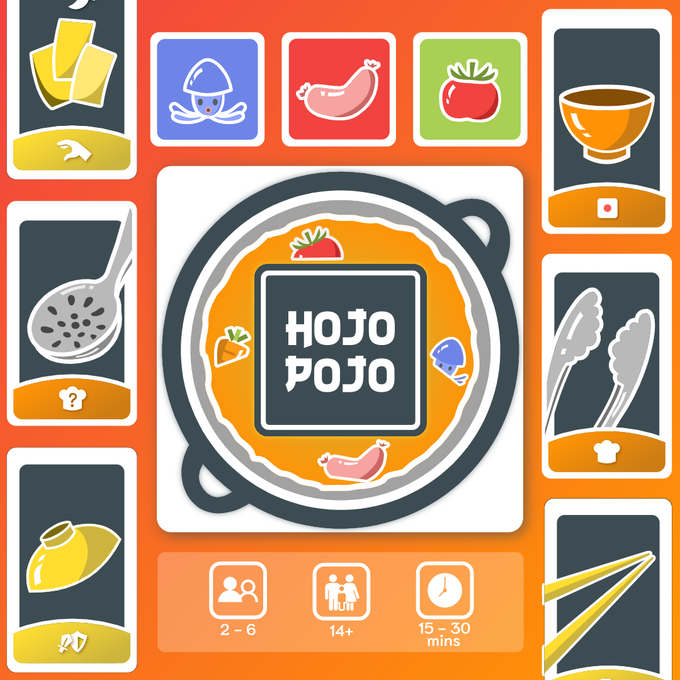 This game makes me hungry., but besides that, it looks like a fun, fast-playing party game. The real time element ensures frantic action as you play. Visit Hojo Pojo on Kickstarter here to learn more.

Ragnarocks is an asymmetrical, area control game for two players about Vikings staking their claims on the land. In it, you’ll be moving your Viking across the board and placing runestones. Vikings cannot move through runestone spaces and the game ends once all of the Vikings are separated from each other by runestones. At the end of the game, whoever controls the most territory in Midgard wins!

Having played (and enjoyed) Gordon Hamilton’s previous game Santorini, I’m betting Ragnarocks, while different in gameplay, will have a similar feel. The asymmetrical nature of the game comes in the form of the gods. Each player will have a patron who lends them a special power. I expect it will be a lot of fun to try out different combinations of gods to see how they play off each other. You can learn more about Ragnarocks here on Kickstarter.