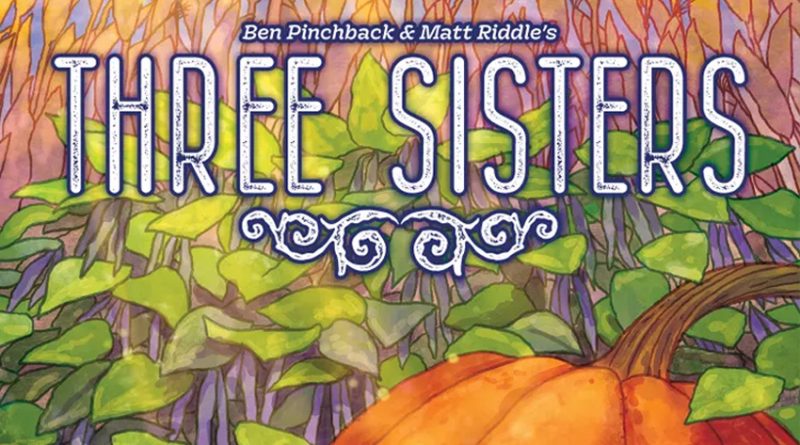 Three Sisters is a denser roll & write than most, despite its pleasant agricultural theme.

Three Sisters, on Kickstarter now, is a new roll & write and the latest game from Ben Pinchback and Matt Riddle, two of our favorite designers behind such staples of our collection as Morocco, Fleet, and Piepmatz.  Three Sisters isn’t the dynamic designer duo’s first foray into the genre of Roll & Write games, but have they managed to create another game destined to become part of our permanent collection?  Find out as we plant, water, and harvest our way through this Kickstarter preview of Three Sisters! 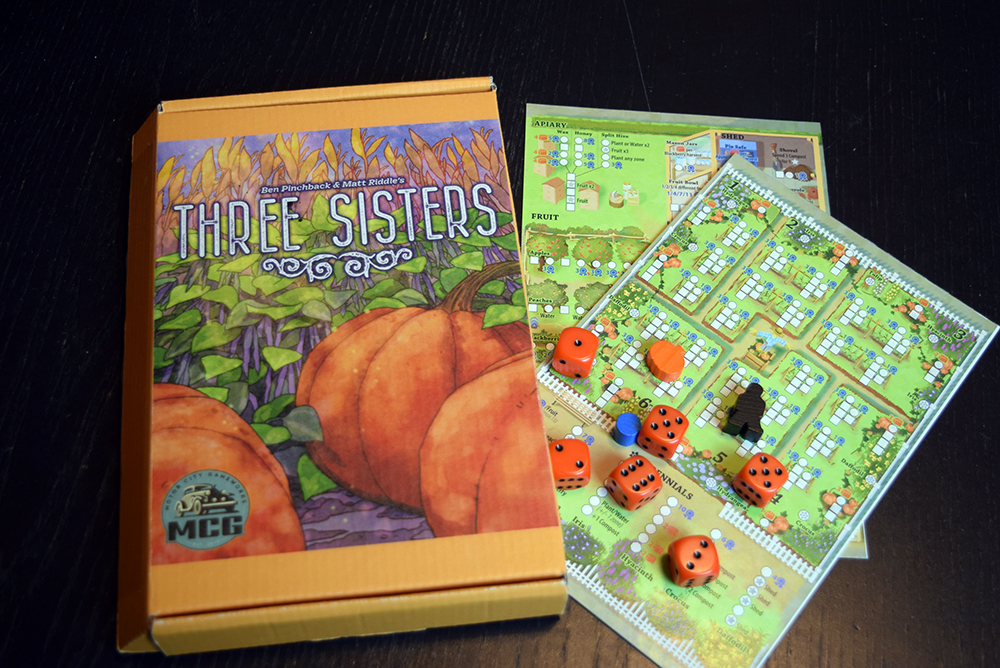 We received a prototype of Three Sisters for this preview, with the right to request a finished copy.  We weren’t otherwise compensated.

In Three Sisters, you’ll be spending the summer developing your garden by planting corn, beans, and pumpkins, the titular trio of crops that have a natural synergy when planted in the same fields.  Over the course of the game, you’ll be selecting dice from a turn tracker and using those dice to tend to your fields, as well as take advantage of bonus actions which will help you in your horticultural endeavors.  At the end of the game, it’ll be the gardener who’s amassed the biggest point pile who will be declared winner! 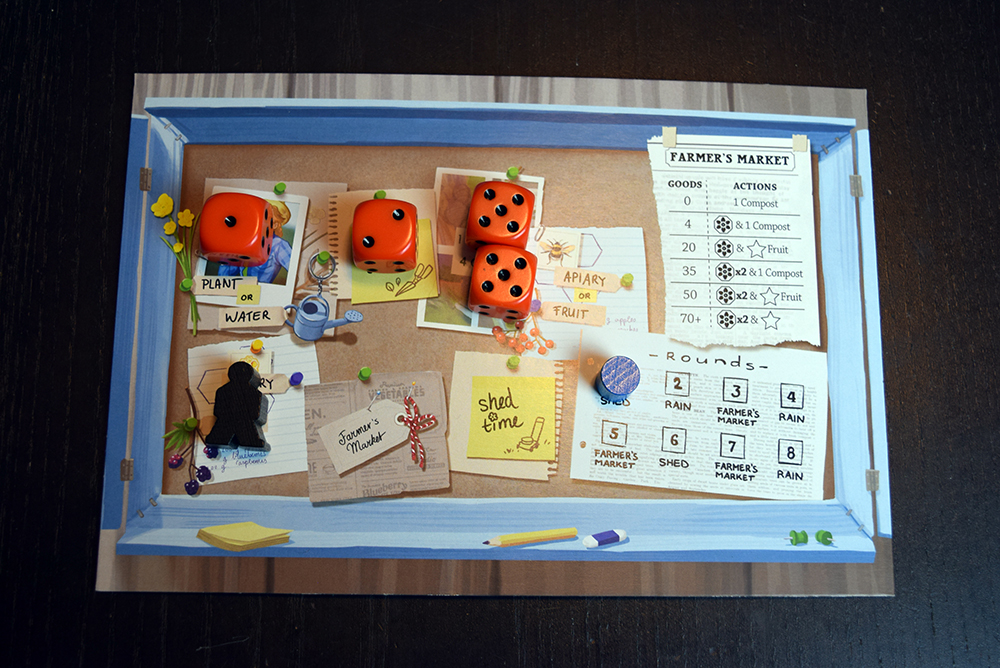 Each round, the lead player rolls the dice and assigns them to the action rondel.  On your turn, you’ll claim one of the dice and take a gardening action, which will either be to plant in a zone (marking off the first box for up to two plants) or you’ll water a zone, which marks off the next-highest blank in all plants that have been previously planted in that zone.

Andrew
Which zone you’ll garden in is determined by the value of the die you took. 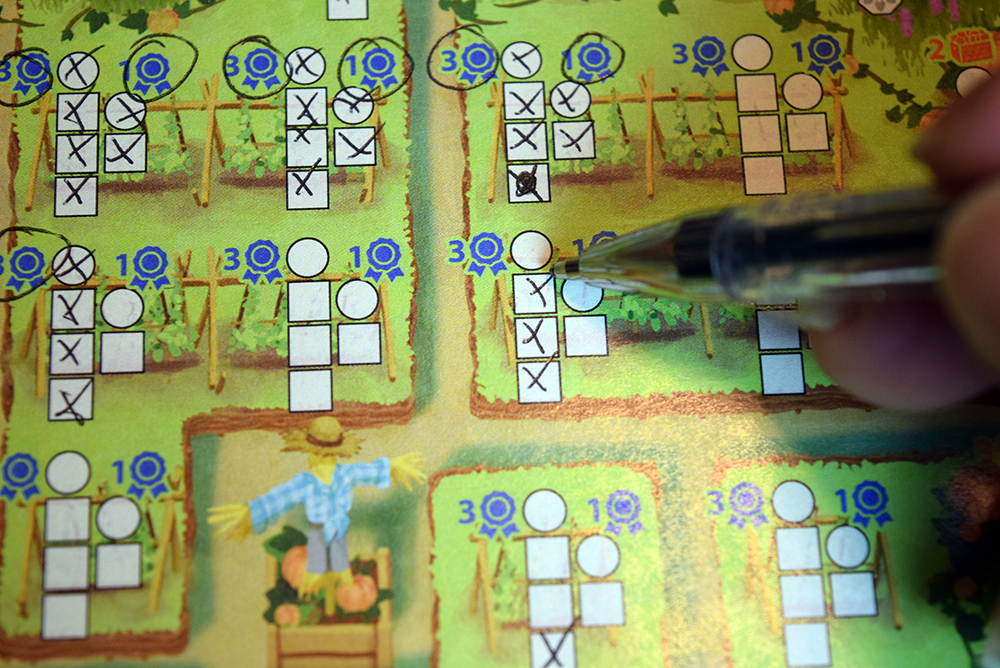 Once you’ve gardened, you’ll also take the rondel action of the space where you took the die from.  These actions will let you do extra gardening, mark off items in your shed, get bonuses from the Farmer’s Market, and tend to your flowers, perennials, apiary, and fruit trees.  Finally, after all players have taken their actions, all players will take an additional action based on the movement of Farmer Edith, a helpful neighbor who wanders around the roundel every round.

At the end of each round, the Event phase triggers, and all players will benefit from either rain, the Farmer’s Market, or bonus shed actions.  Planning ahead to take advantage of these actions is a great way of getting the most out of every round. 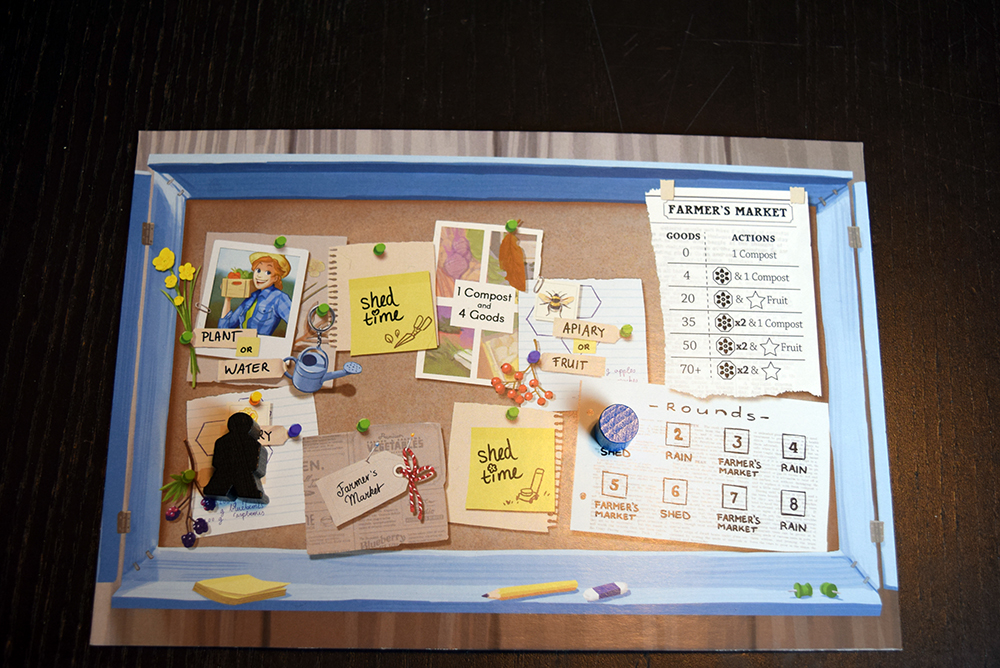 Jess
And if that sounds like a lot, well, it is! Three Sisters has a surprising number of moving parts for its pleasantly-pastoral theme.

Andrew
Yeah, don’t let those pumpkins fool you. This one’s a thinker. 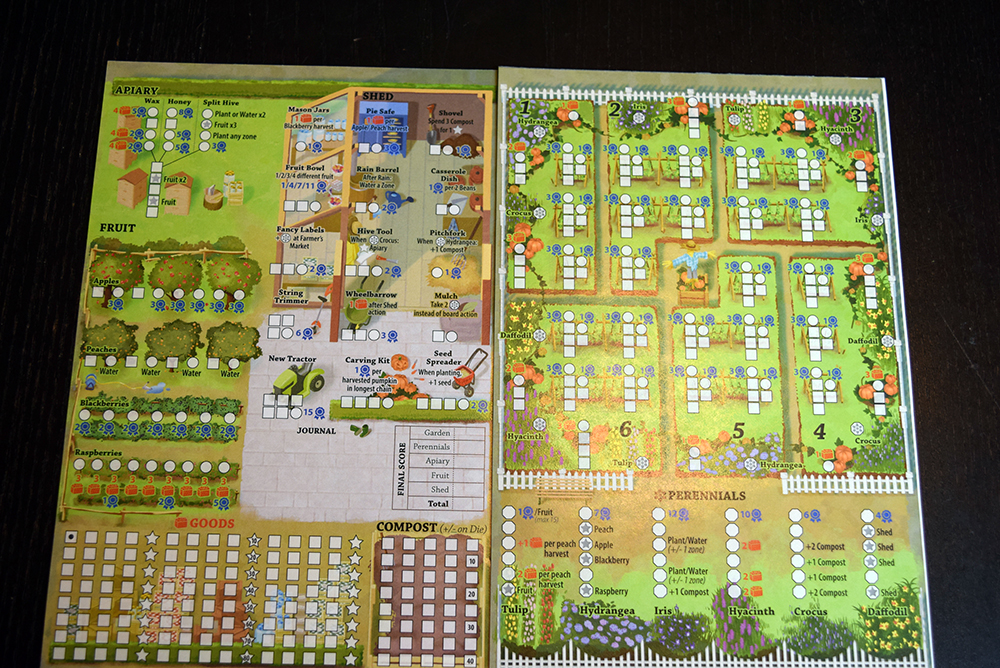 Much like their previous roll & write, Fleet: The Dice Game, Three Sisters delivers roll & write gameplay that is thinkier than many games in the genre (as evidenced by the double-wide sheet you’ll be working with).  Instead of just being focused on how best to allocate a given action, you’ll really want to think in terms of chains in order to maximize your per-turn actions.

For example, taking the watering action might let you completely grow a pumpkin, which, in turn, will add goods to your goods track.  Every five goods you get gives you a bonus action, which you might use to mark off the first space in your Tulip track, which gives you the ability to mark off a fruit, and if that fruit was, say, your second Peach, then you get a free Watering action, which you might use to… 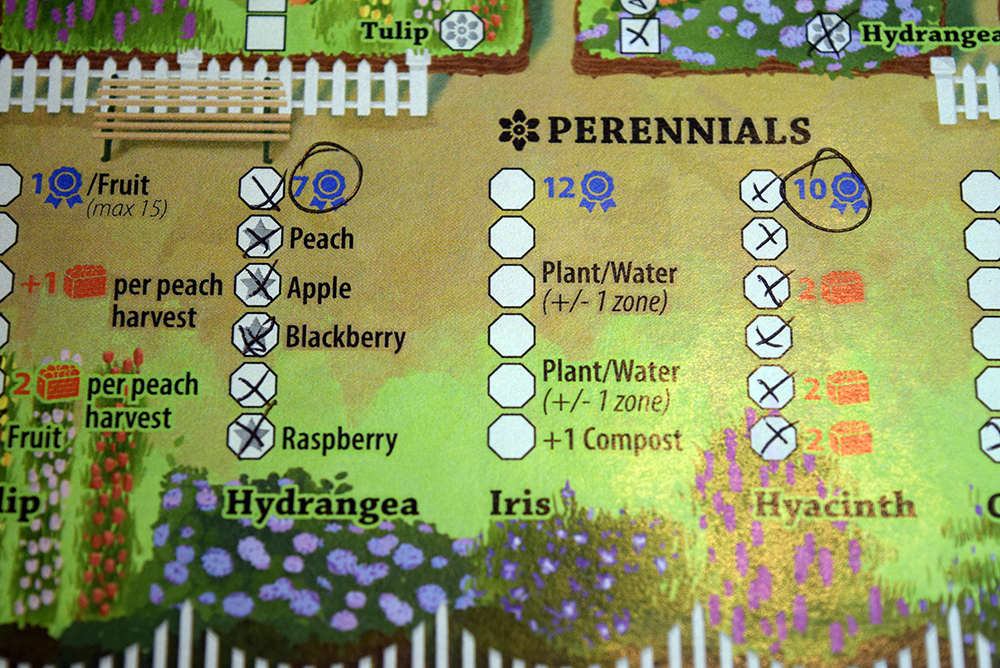 Jess
I think they get it! But yeah, combos are what Three Sisters is really all about, and my favorite turns are when I managed to line things up so that I got lots done with what was technically a single action.

Andrew
And that’s really important, because Three Sisters only lasts 8 rounds. It’s one of those games where you start out with all these lofty goals of all the things you’re going to grow, but halfway through you’ll suddenly realize you’re never going to be able to do it all.

Jess
Right, but then that only makes the combos all the more exciting to pull off!

Building out your shed is another great way to multiply the effect of your actions – completed shed projects give a plethora of simultaneous bonuses, extra functionality, and just great big gobs of points.  But of course, time spent on your shed is time not spent gardening, or harvesting fruit, or tending to your bees.  Did we mention the bees? 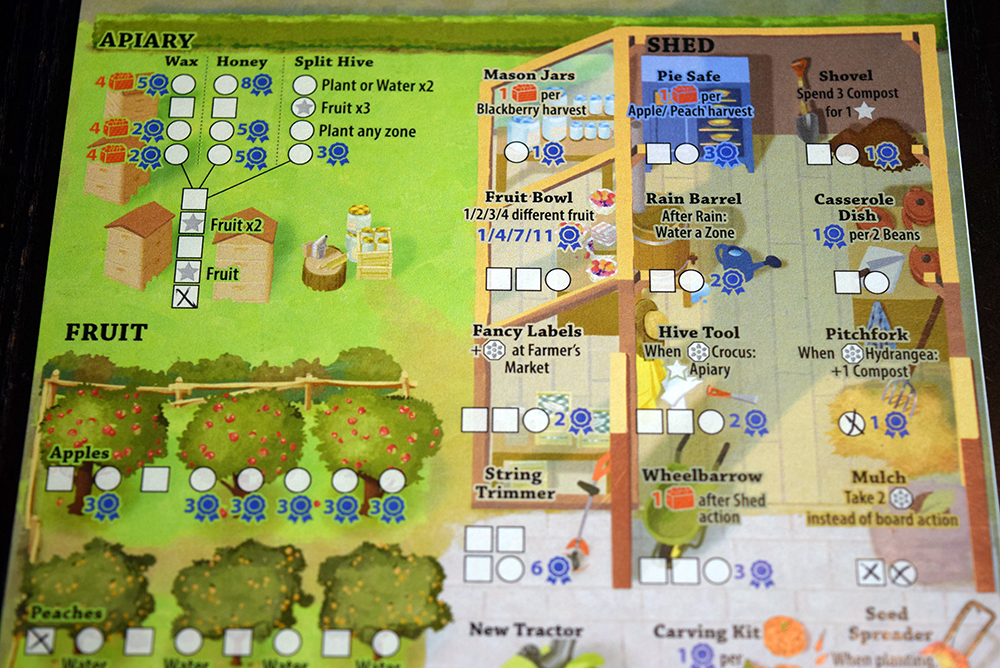 On the whole, Three Sisters is an excellent game.  The mechanisms are quite simple – each turn, all you’re really doing is picking which die you’re going to take.  However, the nature of the game is such that this tiny decision-point has the potential to cascade out into a snarl of actions, bonuses, and points.  And it’s there that once could also be critical of Three Sisters.  Simply put, there’s a lot to keep track of, and the calculus of how best to spend a given turn can become a real ordeal, especially late in the game when you’ve managed to get some shed bonuses that have compounding effects on other action choices or end-game scoring options. 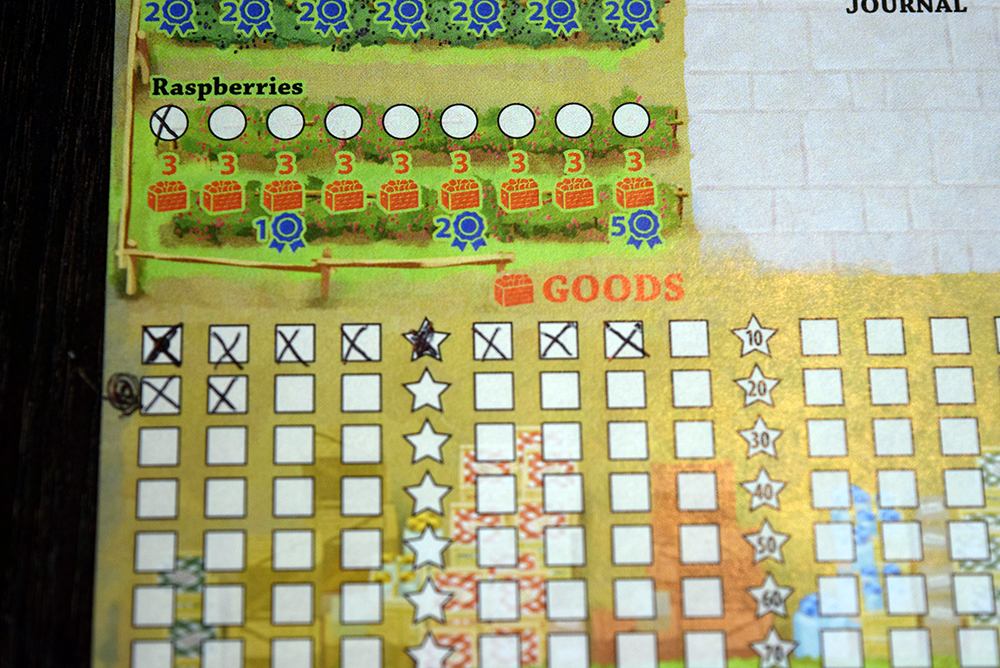 Jess
End of the day, I loved this one. It’s a little heavier than many roll & writes, but that’s part of what makes it great. Just like Fleet: The Dice Game, there’s enough to chew on that it feels good to play, and I had an absolute blast with it…in sort of a quiet, contemplative sorta way. You know?

Andrew
I know exactly what you mean – it’s how I feel about Three Sisters too. Yeah, player interaction is down to who takes what die and we did sit in silence and stare at our sheets a lot, but that’s just fine. At the end of the day, I really loved what it did and didn’t miss anything that it didn’t.

We wholeheartedly recommend Three Sisters if you’re in the mood for a more strategic roll & write experience with a theme that remains tranquil and beautiful – art from Marlies Barends & Beth Sobel make it a delight to stare at.  The Three Sisters Kickstarter is running now and you should definitely head on over and check it out!