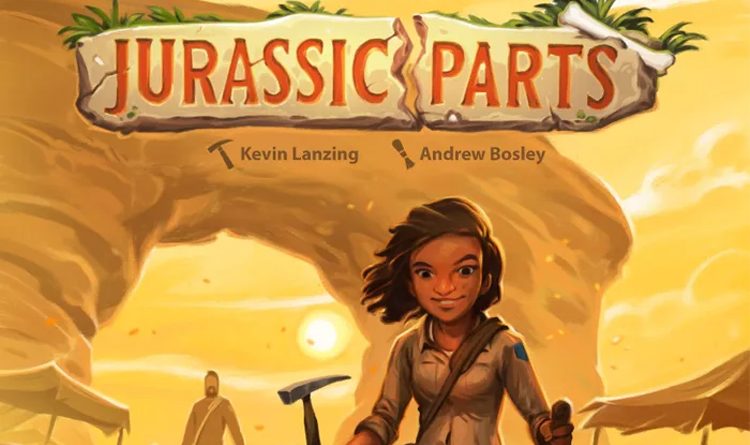 
In Jurassic Parts, a pack of fossil-hungry paleontologists have descended on a bone-rich dig site, ready to excavate the remains of the long-lost thunder lizards for glory and fame!  So sharpen your chisels and get in while you can, because to the best excavator goes truly T-Rex-sized rewards!  So join us as we dig into Jurassic Parts!

We received a copy of Jurassic Parts for our consideration and possible review.  We weren’t otherwise compensated. 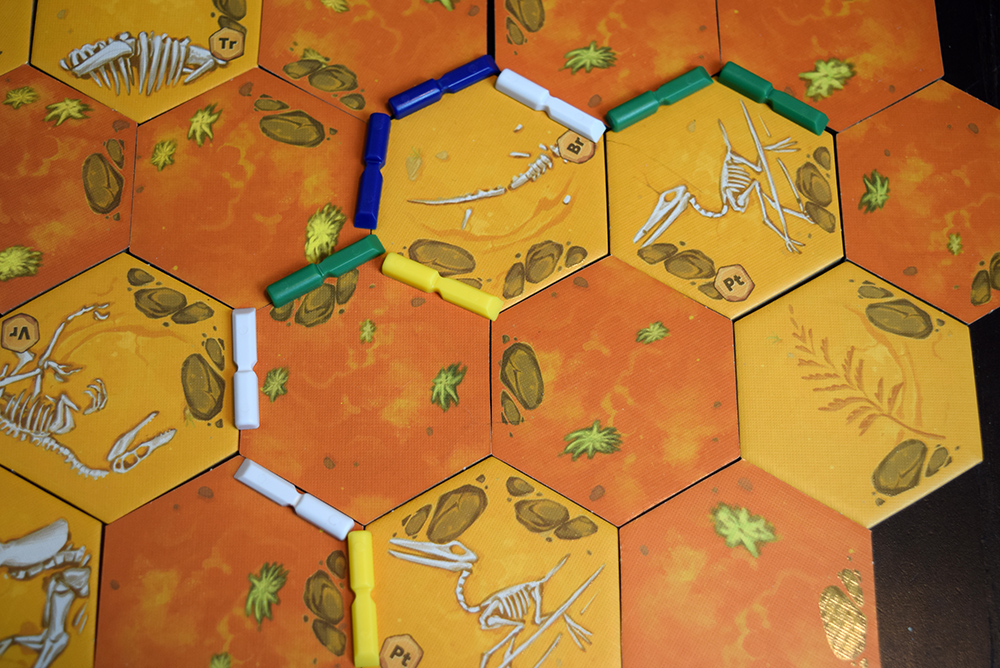 At its petrified core, Jurassic Parts is a set collection game where players will use their chisels to hammer apart the shared slab that everyone is excavating.  Each turn, you’ll have the opportunity to lay down chisels along tile edges, and as soon as the slab is split by a line of chisels, the smaller side is divvied up among the players who contributed chisels to the excavation.  In order from most chisels to least, each player involved in the dig will claim half the fossils available, with leftovers being sent to the Field Leader (who will sell them back to you, for a price).

When you manage to collect all the pieces you need to complete a skeleton, you can reveal it to secure endgame points for yourself.  You also get amber, which can be spent at the Field Leader to get various bonuses, including buying back some of those fossils that might have been turned over to him during a previous excavation.

In the case of particularly large (or fossil-rich) splits, having your pick of the fossils is a huge advantage, so you’ll definitely want to do everything in your power to make sure that you’re in a commanding position every chance you get.  The difference between coming in first and coming in third can quickly leave a player in the dust if it happens with any degree of consistency.

Jess
Yeah, Jurassic Parts doesn’t really have anything that resembles a catch-up mechanism, so it’s important to get your hands on those fossils every time you can!

Andrew
I’d say it goes one step past that – since completed skeletons get you amber (including being able to sell fossils you don’t want for amber), the player with more bones will inevitably be in a better position than the player with less. So there is a bit of a ‘rich get richer’ issue in play here.

What that translates into is making Jurassic Parts a surprisingly cut-throat game despite its decidedly academic theme.  Players can’t really afford to stay out of each other’s way, and your greed for chipping off your own huge section of the dig site will always need to be measured against throwing a chisel or two into another player’s space so that you can get a piece of their hard work.  And of course, when another player does that to you, you’ll likely decide to hack the dig even smaller to cut them off if you can.

Andrew
And that’s really where the game is in Jurassic Parts, that tension of trying to get the best sets you can while keeping an eye on what those other wily paleontologists are up to, and stopping them whenever you can.

Eventually, you and your fellow fossilophiles will collect everything the slab has to offer.  Points are awarded based on complete dino skeletons, a set bonus for fossilized plant matter, and finally unspent amber, with ties broken by the person who made the most high-point-scoring skeletons.

Jess
So, I’ve got to say, I found Jurassic Parts to be okay. Not great, not bad. Sorta middle of the road, which is too bad because I adore the theme and the visual presentation.

Andrew
I pretty much felt the same way. I loved the diversity in the cast of characters, but there isn’t any sort of variable player abilities to make the game asymmetrical, so it really is just down to simple, cutthroat chisel placement. 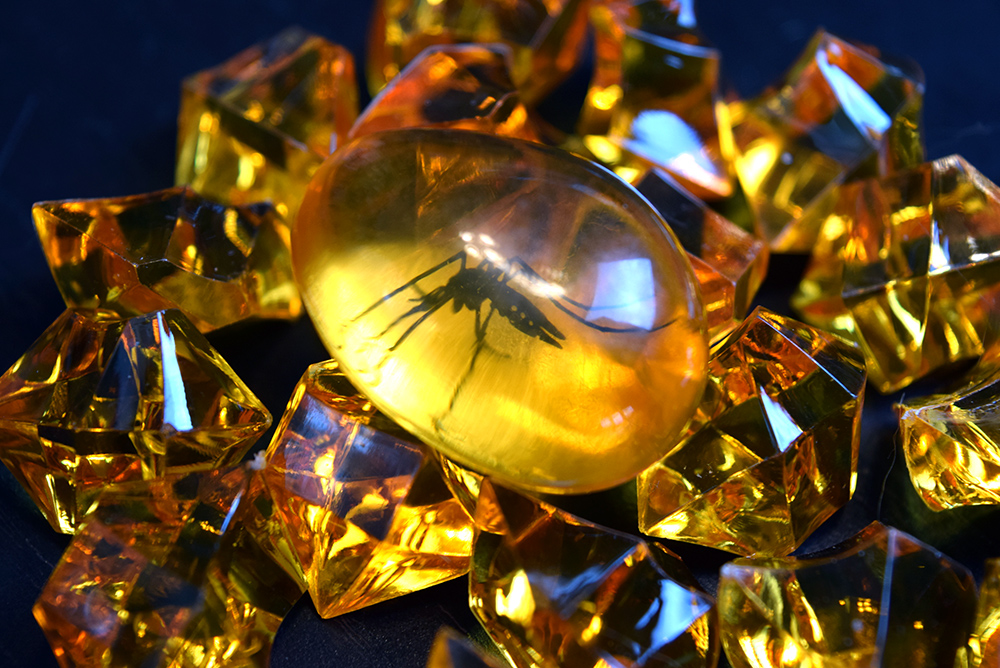 Not that there’s anything the slightest bit wrong with Jurassic Parts’s relatively straightforward gameplay.  It didn’t disappoint so much as didn’t thrill.  Ultimately, we feel like there are two groups who will get the most out of it – folks who are absolutely enamored with the theme, and people who will get a kick out of the contentious nature of the gameplay.  And while Jurassic Parts ended up not being particularly to our taste, we’re sure that there are folks who will find a lot to enjoy in this oddly toothly family-weight chisel-fest.