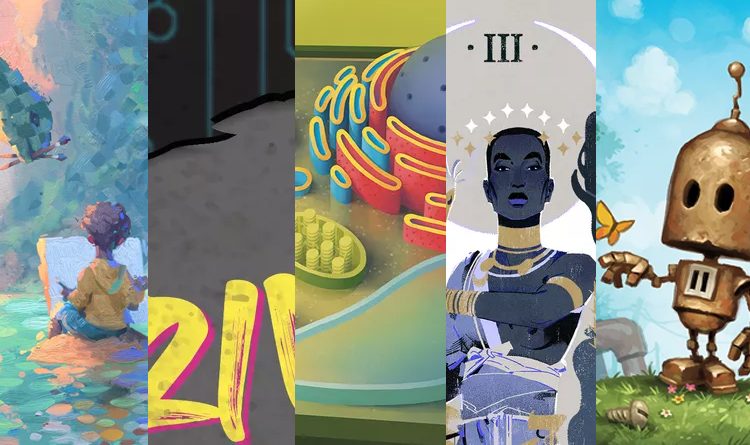 Jess
It’s been a little bit since we dove into the depths of Kickstarter and surfaced with some gems, but I’m back and ready to go! Let’s wade in and see what’s fun this week!

Canvas is a clever game of creating beautiful paintings. In it you layer 3 transparent cards in a sleeve to add different elements to a scene and then gain ribbons for your completed picture. You can gain bonus ribbons for matching elements. Once everyone has completed 3 paintings, the game ends and the player with the most ribbons wins. This project is not only funding the reprint, but also an expansion called Reflections. The expansion adds new mirror cards which have the same icon on both side, but add different color swatches to give you more options for scoring. It also includes gold bonus icons which give you even more bonus points! 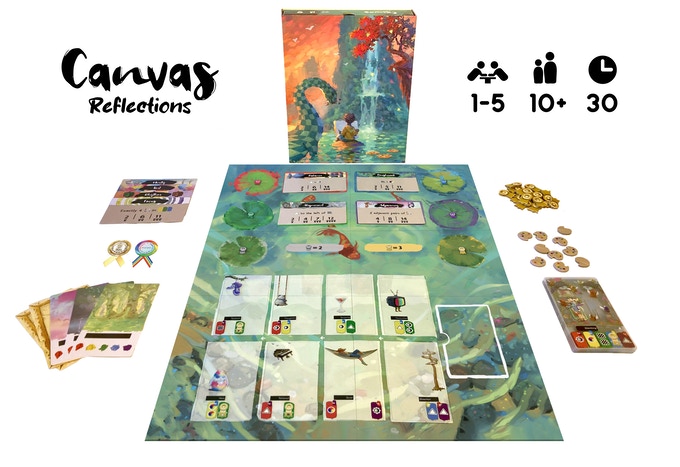 I really like the theme of Canvas and I love how the paintings come together through the transparent card design. If you enjoy gorgeous art and set collection games then make sure to check out Canvas and Reflections on Kickstarter here.

Rivet Heads is a cyberpunk card drafting game where players are forming cybernetically enhanced squads. Each player gets an assembly line and will take turns claiming cards in the display. The card you take is added to your assembly line and all cards in the line will activate. Then the cards move to the right with the last card falling off. In this way your cards will activate 3 times over your turns. The cards you collect will score you points as well as moving you up or down on the various tracks. Once all cards have been taken, the game ends. Players will earn extra points for being the highest on each track and whoever earned the most points wins. 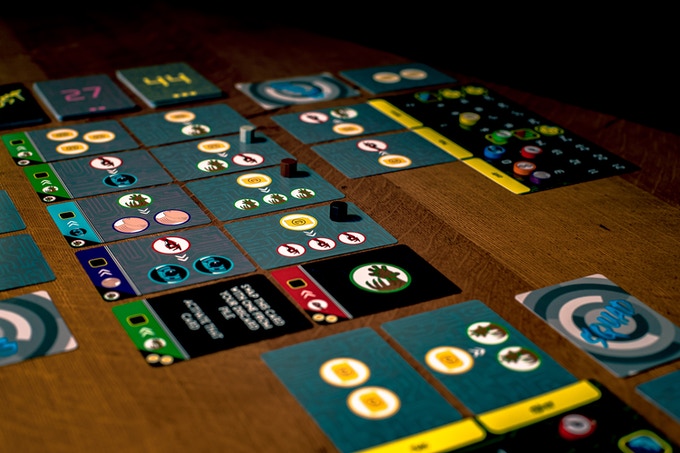 Rivet Heads is a challenging puzzle. You always need to think 3 steps ahead to make sure you maximize the rewards from your assembly line. You’ll really get the feel of running a dystopian factory pumping out cyber samurai badasses ready to do your bidding. If that sounds like your jam then make sure to check out Rivet Heads on Kickstarter here.

Genius Games are always a delight to play not only for their fun factor, but also because they teach you something. In Cellulose: A Plant Cell Biology Game, you’ll take on the role of a plant cell. You’ll need to place your workers  to collect water and CO2, produce carbohydrates through photosynthesis, and use those carbs to build the cell wall to score points. Throughout the game you can get cell component cards which give you powerful bonuses; letting you recover action markers. granting extra actions, and more. Once the cell wall is complete, the game ends and the player who earned the most points wins! 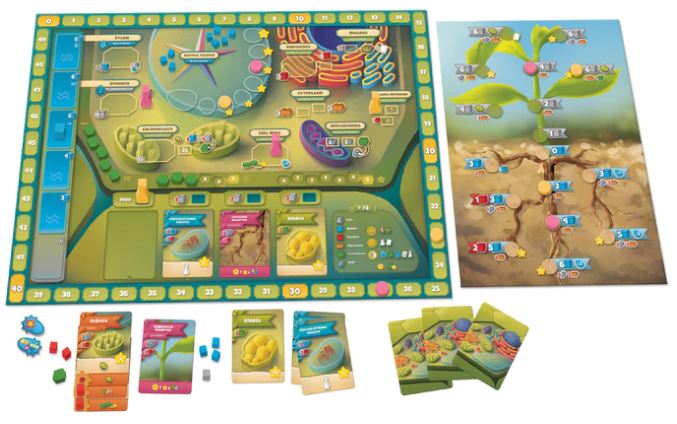 Just look at that gorgeous board. First and foremost I am drawn in by the art and color palette. Then you have the gameplay itself which takes complicated scientific ideas and teaches you about them with simple worker placement mechanics. I like the addition of the cell component cards as they give you more options and allow you to chain together bonus actions for big, exciting turns. Cellulose is a sure winner for anyone who enjoys science or teachers looking to engage their students in a new way. You can learn more about the game here on Kickstarter.

Causa Creations has taken the idea of a classic tarot deck and transformed it into a board game with a rich lore and gorgeous presentation. The game can be played several different ways including a cooperative 2 player, solitaire, and competitive 2 player mode. The objective of the game is to fill all of the spaces on the board with cards and make sure to cover each of the Major Arcana cards on the playing field by placing an equal value of Minor Arcana cards on top of each one. 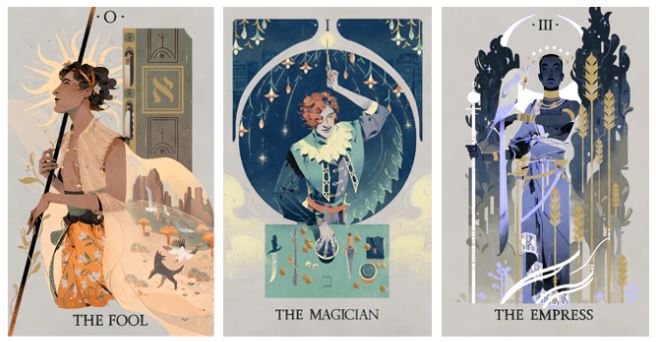 This game is astoundingly beautiful. I am in love with the artwork and would probably back it just to get the deck of Tarot cards , but I’m also intrigued by the game. I think it is kind of fascinating to see what kind of stories the cards will tell as you play if you follow their interpretations. I think this could be a fantastic present for anyone who likes using tarot cards or enjoys hand management games. Divine your future with Sefirot here on Kickstarter.

Did this campaign’s video capture me with its’ Mr. Rogers energy? Yes. Was I wooed by the game itself. Heck yes! Transmissions is a rondel-driven set collection game where players share worker robots trying to build pipes. Each turn you’ll move a robot and then take an action to collect engrams and electricity, draw cards, and buy items. You’ll also be building a set of pipes, using items to gain ideas, and constructing robots. Once there are no ideas are left, a player’s robots are complete, or no pipes left to build, the game ends and the player with the highest total score wins! 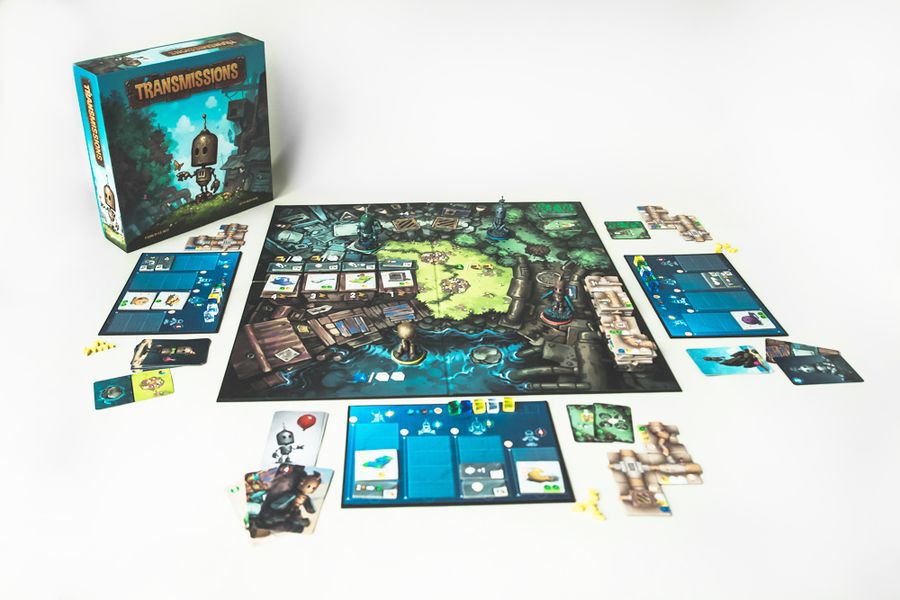 Who can resist these adorable robots? Not only are they cute, but I also am intrigued at the idea that everyone shares them as workers. This means that your plays can help/hinder your opponents, so planning ahead and knowing how to leave yourself in a good position while not giving the other players a beneficial spot is key. Learn more about Transmissions here on Kickstarter.