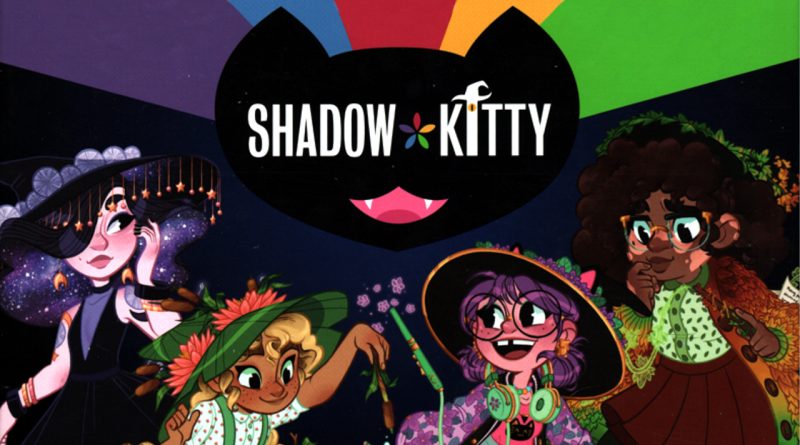 The Sparkle Kitty series has held a special place in my heart for its goofy, giggle inducing wordplay and for the badass princesses that the game is centered around. Shadow Kitty is a whole new twist on the word combining game that does away with the whole princesses stuck in towers and instead has you freeing cute familiars from a cursed clock. Does Shadow Kitty outsparkle its predecessors? Let’s find out! 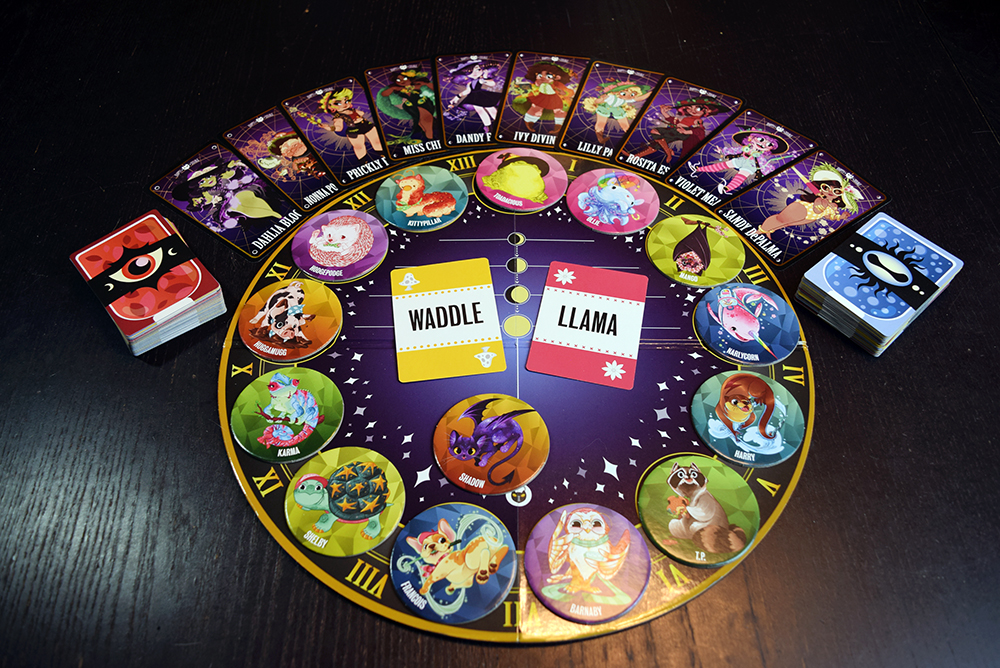 We were sent a copy of Shadow Kitty for our consideration and review.

If you are familiar with Sparkle Kitty, then you’ll recognize a lot of the mechanics of Shadow Kitty (if not check out our review here), but there are some big differences. Shadow Kitty is a cooperative game where the goal is to cast enough spells to free all 13 familiars from the cursed clock. 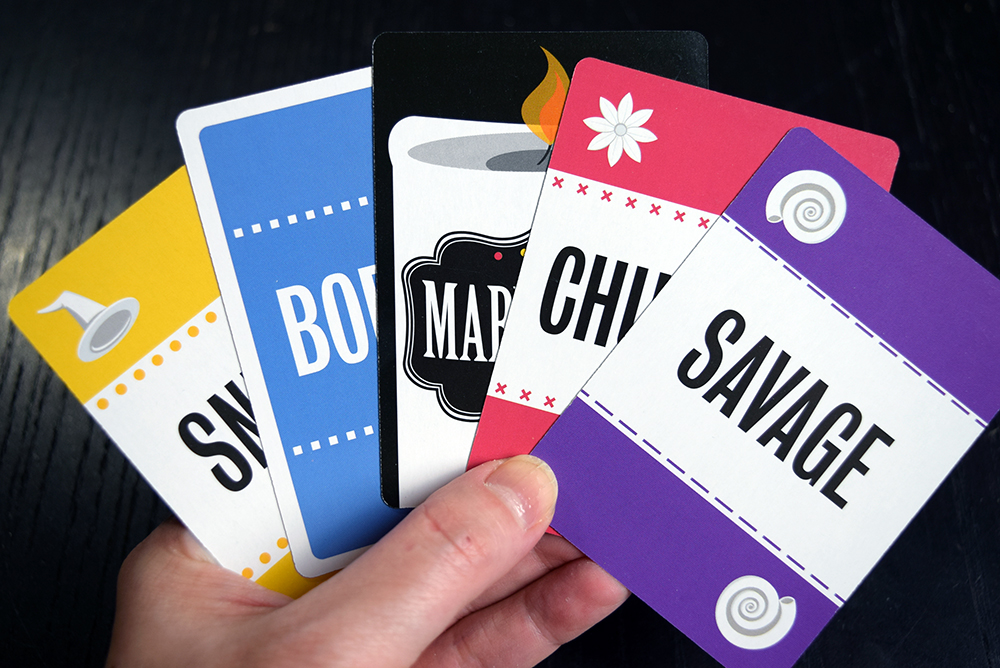 Each player will start with a hand of 5 cards and, on their turn, must play 1 card onto the board or pass. There are 2 columns on the board you can play into and when adding a card into a column you cannot repeat any color or symbol played previously into that column. Then you must read the spell you have created out loud (this is mostly just to amuse everyone at the table when you have to proudly belt out “Squiggle Goose!”). Once you have played 4 cards into a column, the spell is complete and you will place the completed spell on the next available time slot on the clock and flip a familiar to free them. 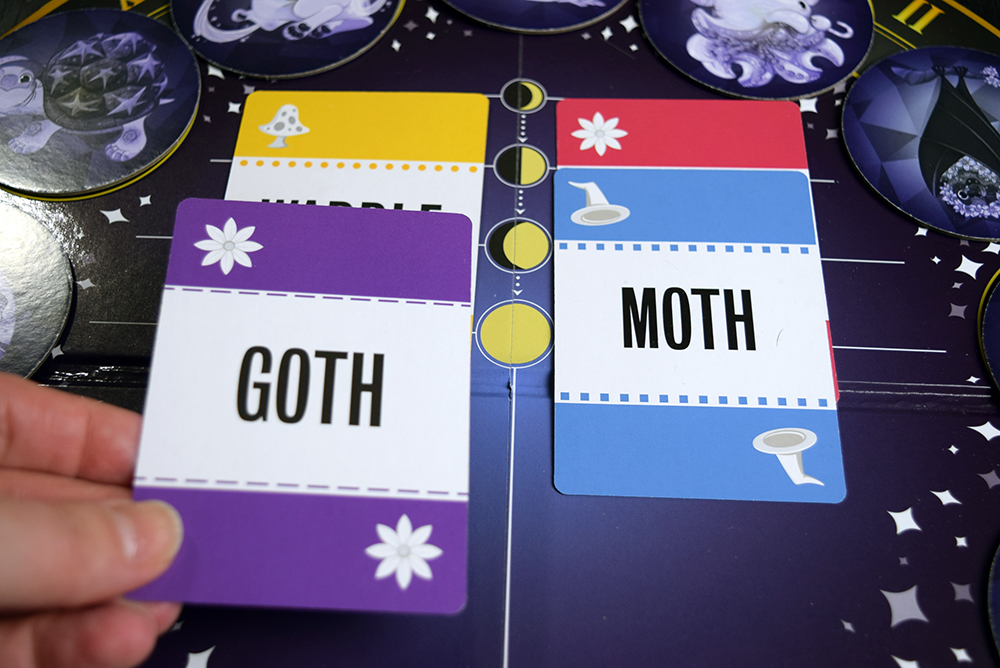 If you choose to pass instead, you will remove all of the spell cards in 1 column and place them on the next available time slot. You can then draw a card and end your turn.

At any time during the game, if you have a spell card that matches one played previously you can yell “Double” and whatever the spell name is and play the card directly on top of the matching card. This will allow you to flip over a familiar without having to complete a spell.

If you manage to empty your hand you can then draw 5 new cards and flip over a familiar. 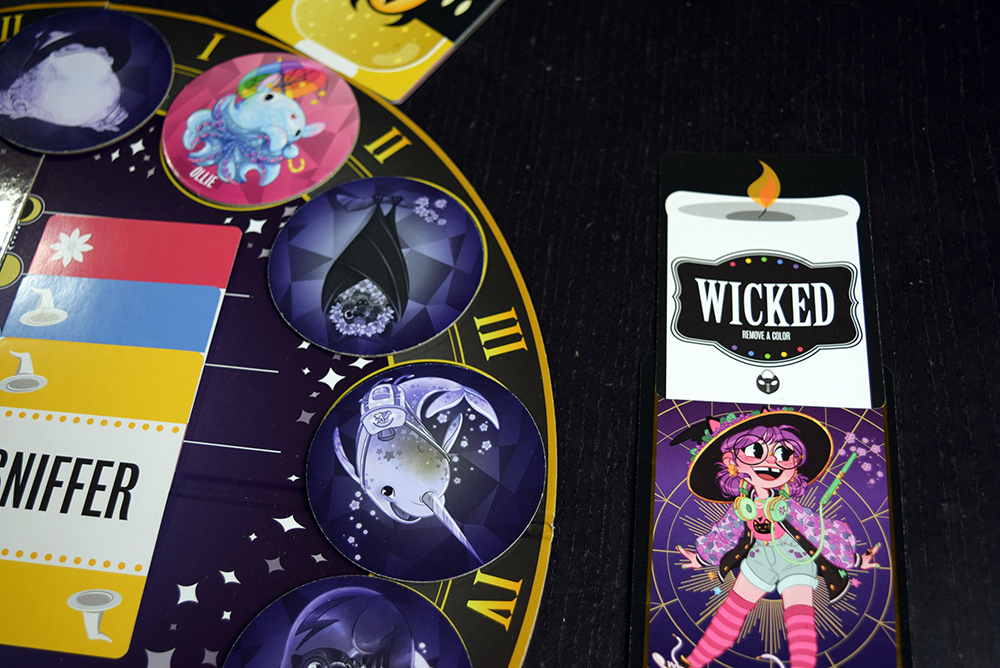 This all sounds pretty simple so far, but remember this clock is CURSED! Mixed into the deck are ritual cards which you can play on your turn. These cards are played onto your witch instead of the clock. Playing a ritual makes you remove all cards of one color from the clock. That may sound helpful, but while your witch is sporting a ritual card you cannot free any familiars. The only ways to clear a ritual is to either complete a spell or if all players have a ritual card on their witch. 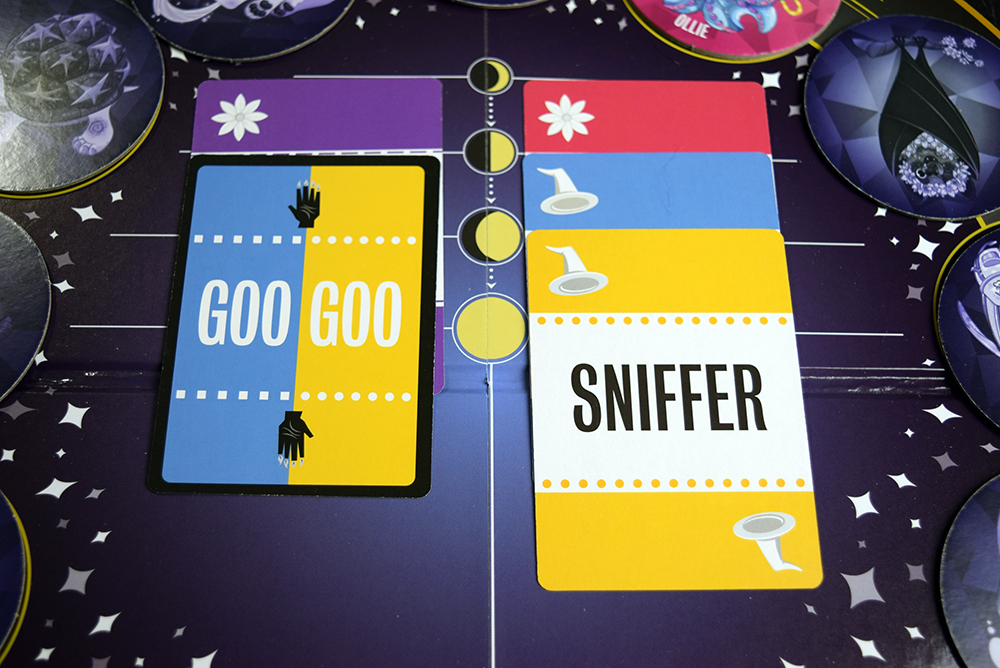 Another problem are the Hex cards. These cards count as 2 colors and you can’t complete a spell that has a hex in it. Thankfully there are also Bless cards which have no symbol and can cover any card of a matching color. Play it and say goodbye to that hex! 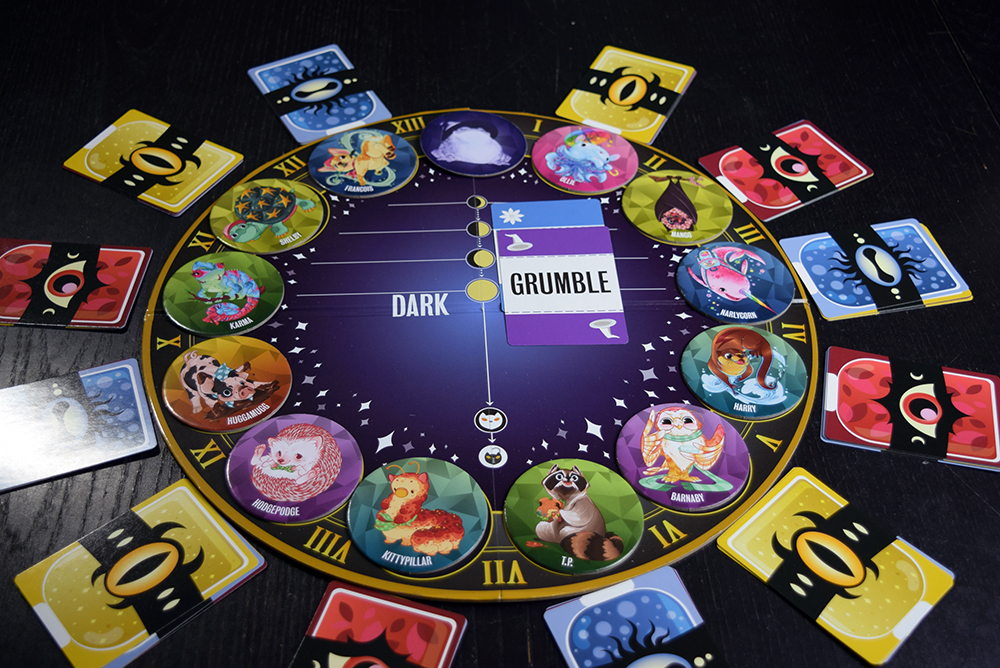 Andrew
I really wanted to like Shadow Kitty more than I did.

Jess
Yeah, I know what you’re saying. It has all of the backbone that made Sparkle Kitty so much fun and yet fell short in a few key places. 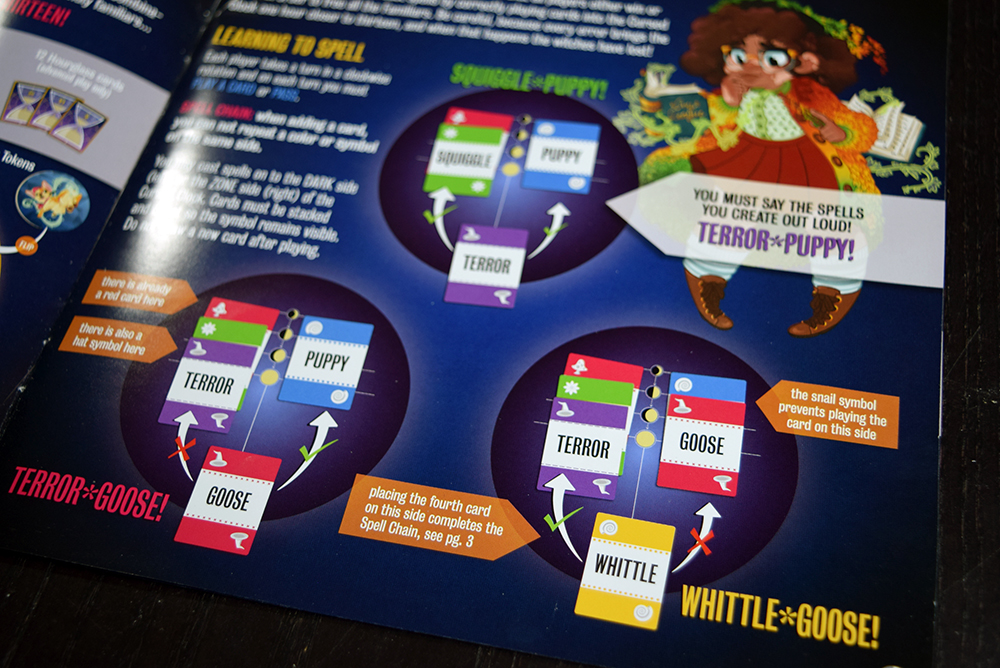 First and foremost, the rulebook failed us. We had 4 grown adults sitting around this rulebook reading and rereading sections, baffled by the layout and information structure. Some key rules are relegated to small callouts which made it easy to lose track of them as we tried to make sense of it all.  All the information is there, it just felt like the layout was more concerned with looking cool than providing the rules in a concise, easy-to-follow flow. 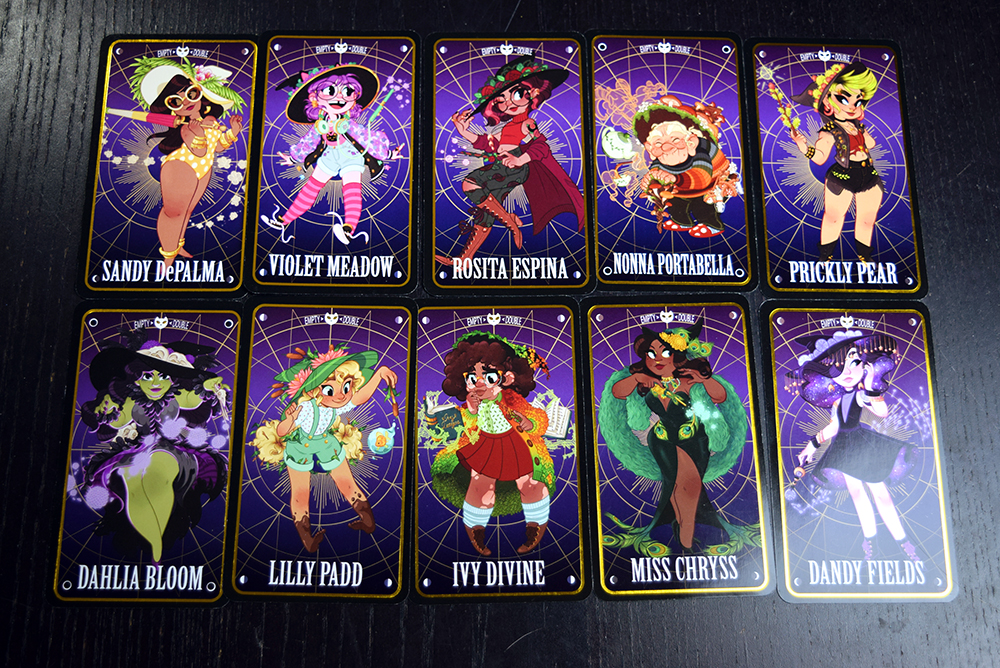 Secondly, we were really disappointed by the witch cards. The art on them is so fantastic, but they are really just placeholders for hex cards. We felt that it was a missed opportunity to have variable player powers or maybe just a spot to have a player aid.  This one bugged us a lot, because these cards (and the familiars) are the only place where the flavor of Shadow Kitty really exists, and the art is so fantastic and the characters are so cool and diverse that the fact that they contributed nothing to the game itself was a huge let-down.

Finally, the game really is a luck-fest.  If you don’t have the right cards, you’ve got very little in the way of control of getting yourself to a better position, and since it’s a cooperative game, your bad luck is everyone’s bad luck – when we’re on top of the game and freeing familiars left and right, that’s awesome!  But just as often, you’re jammed up with unhelpful cards and the clock is ticking… 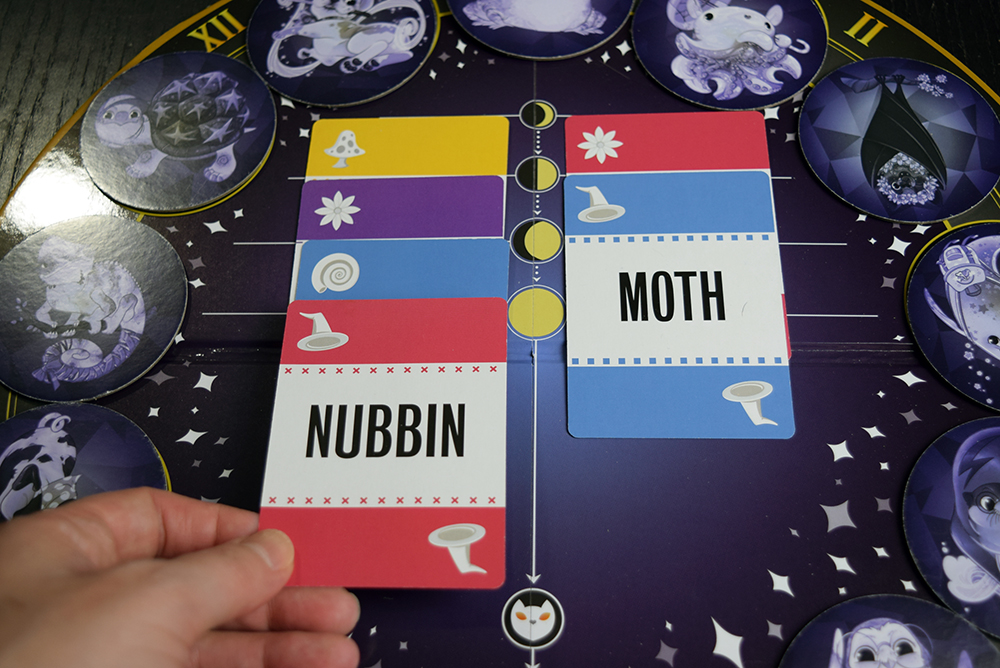 Problems aside, where Shadow Kitty does shine is in the aspects where it crosses over with Sparkle Kitty: The fantastic art and the funny word combos. As always with this series, we had fun saying the goofy words, but the gameplay felt fussier than previous Kitty games, without giving us interesting or exciting moments to balance against that. In our opinion, Shadow Kitty has some issues that make it less fun that Sparkle Kitty, but if you are looking for a tougher game, then this one might just be for you.

You can find Shadow Kitty here on the Breaking Games webstore.