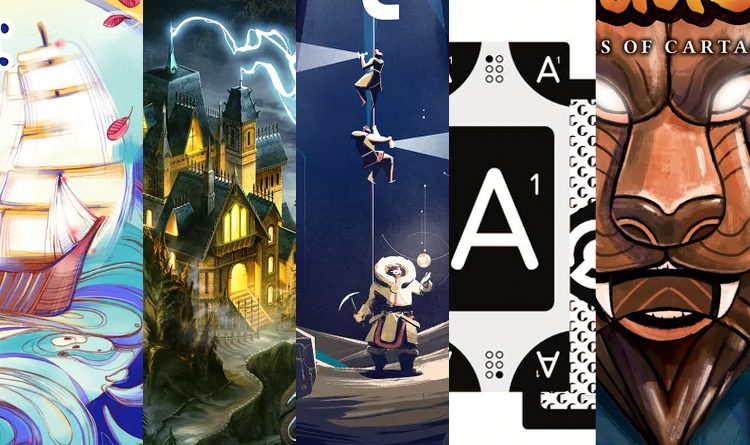 Jess
I was offline for a while due to my computer biting the big one, but now I’m back and ready for a fun filled Friday so let’s dive on into the Kickstarters!

Chai: Tea for 2—A Tea Board Game Duel!

Ahhhhhh! Another beautiful tea game from Steeped Games? Yes please! Chai: Tea for 2 is a dice worker placement game for 1-2 players where you take on the role of tea merchants racing to fulfill their contracts. During the game you’ll be building up your plantation, securing contracts, and selling your tea around the world. Each turn players will roll and assign their dice to take actions. Once one player has fulfilled a certain number of contracts the game ends, players tally up their scores, and the player with the most points wins! 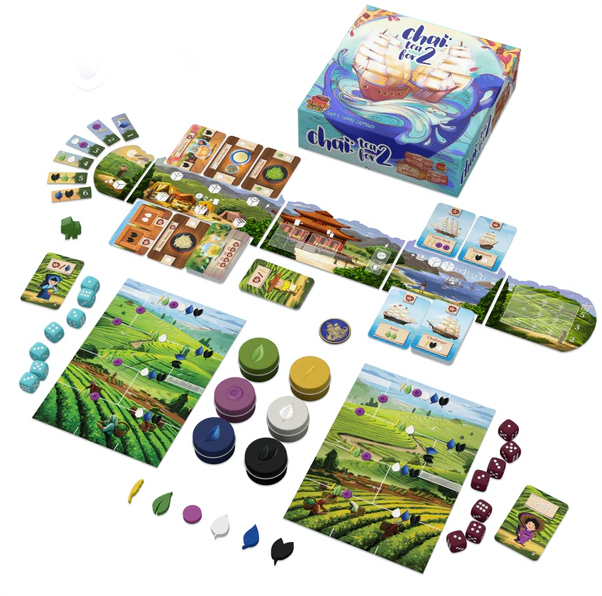 Andrew and I love dice placement games as they often are a satisfying mix of randomness and strategy, so I’m really excited for Chai: Tea for 2. It’s got a relaxing color palette, tempting gameplay, and it also doesn’t hurt that the game’s theme is tea (I really dig tea). Brew up a cuppa and head on over to the Chai: Tea for 2 Kickstarter to learn more.

My Father’s Work is a competition between mad scientists to complete their father’s masterwork. Using an app and the journal as a guide, you’ll be performing experiments and trying not to upset the local populace lest they get out their torches and pitchforks. The game is played out over scenarios with branching narratives of plague, witchcraft, and war where your choices will affect your future generations. The player who earns the most points after 3 generations wins! 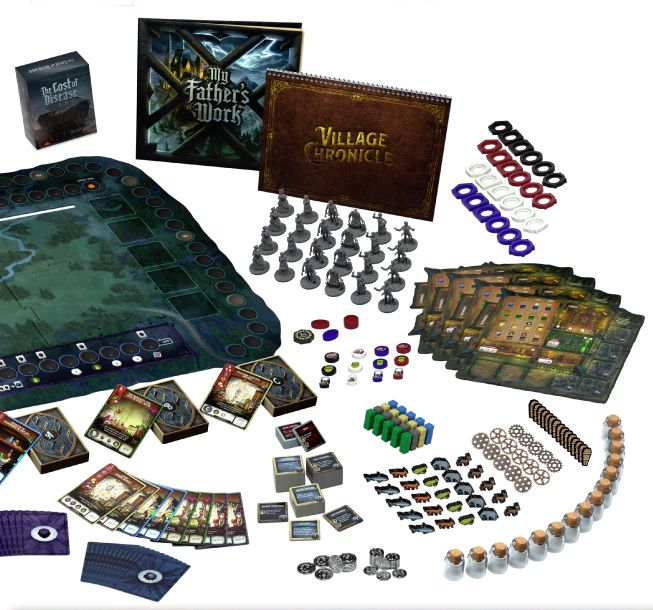 This game looks like a deliciously rich gothic horror story. I like that it uses an app to help guide you through the game and enact events. This is definitely the type of game that I’d want to get a dedicated gaming group together for so that we can really delve into the story together. Investigate further by visiting My Father’s Work on Kickstarter here.

In I C E players take on the role of archeologists exploring the frozen wastes of the Valley of the Ancients, searching for artifacts. The board has five levels of tiles that you can dig down into to collect your artifacts which will earn you reputation points and special abilities. You keep the tiles you remove and can play them later for the effects shown on the back of the tile. Once 1 player uncovers an edifice tile, the game ends and the player with the most points wins. 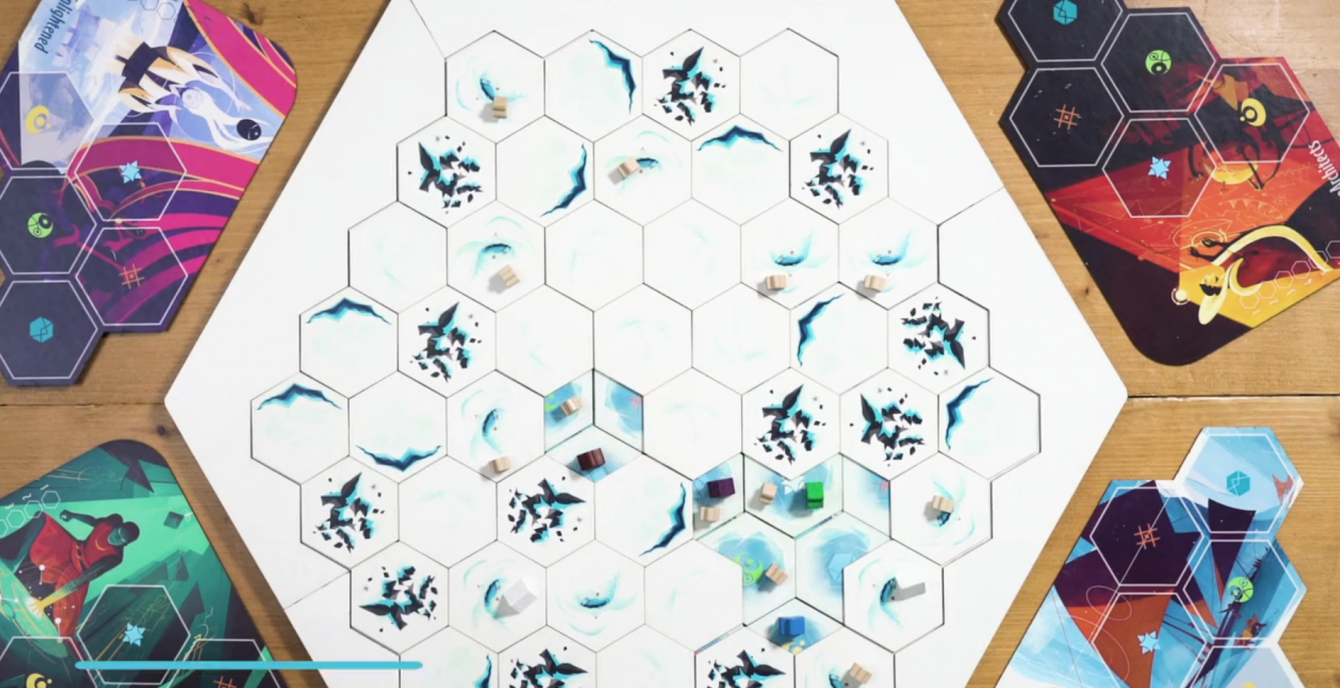 I C E has got a fascinating theme and unique gameplay. I love that the edifice tiles give you new rules that can be played in future games so that each time you find a new one you can really get that exciting feeling of discovery. Dig deep into the I C E Kickstarter here.

Board games have been getting better over the years in terms of accessibility, but we still have a long way to go. Prototypingames is tackling the problem by making Wordish, a word game that is designed for the vision-impaired. The game, challenges players to create as many words as they can to earn points. On your turn you can either draw a card or collect all cards from the discard pile (but only if you they can user the letters collected to form a word or add to a word). Then you can make as many words as you can. The letters you use cannot be used to make other words, but other players can add letters to your words. Each of the letter cards includes a braille version of the letter so that everyone can enjoy the game together. 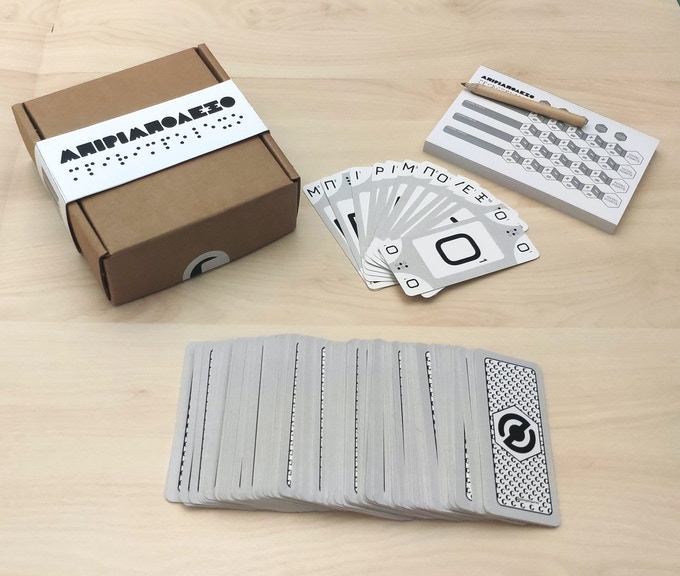 I’m not sure if Wordish will be the be all end all of spelling games, but it is a step in the right direction towards making the gaming table more welcoming and accessible to all. Also the project is donating games to School of Blind in Thessaloniki or the Greek Association of the Blinds for every 5 games purchased. You can check it out here on Kickstarter to learn more.

Aldabas is a tableau building game where players seek to add influential people to their neighborhood as represented by the intricate doorknockers that announce their trade. Each turn you will take two of the three available actions to either gain coins, buy a Door, or play a Door card to your block. Each door has a power and whenever you add a new one to your tableau, you can activate the door as well as the doors around it. Once 1 player completes their tableau or the coins or deck is depleted, the game ends and the player who earned the most points from their doors, the coins in their vault, and majority influence over each profession wins the game. 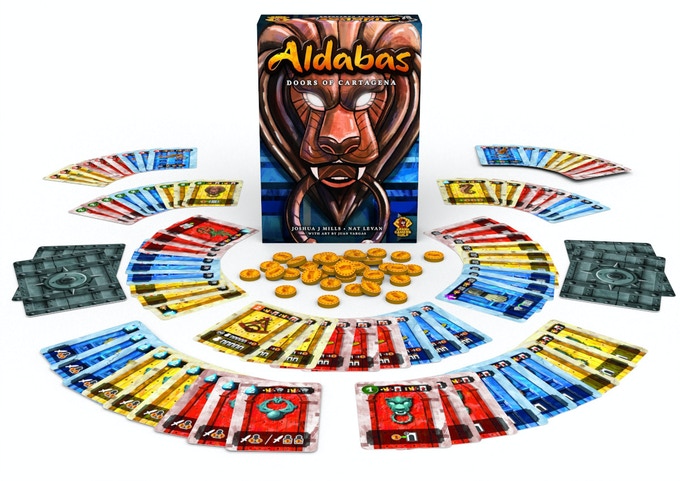 I suspect that, despite Aldabas looking like a relatively simple game, the strategy of when to buy and where to place a door is deep. You’ll want to build up spots where your door powers will trigger for the most benefit, but you also want to balance that with trying to gain majorities. Head on over to the Aldabas Kickstarter to learn more.