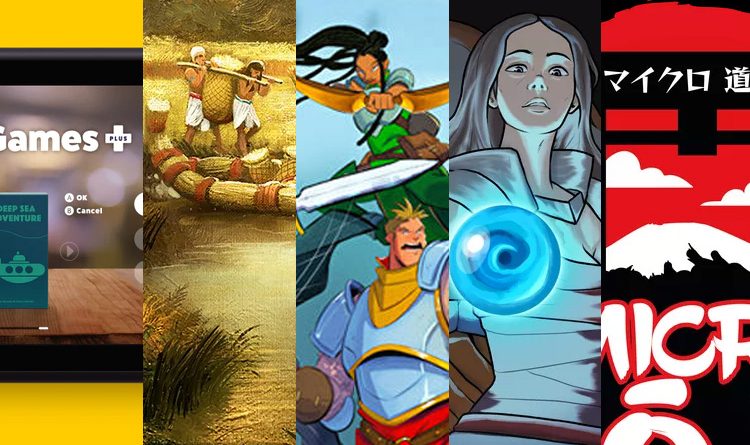 Oink makes these super tiny, yet packed full of fun games that we collect like crows with shiny objects. Now Oink is tempting us with digital versions of their games for the Nintendo Switch! In their Kickstarter campaign they are funding their first 2 games to head to the platform: Deep Sea Adventure and Startups (with other games as stretch goals). Deep Sea Adventure is a push your luck, pick up a deliver game about divers searching the oceans depths for treasure. All players share a single tank of air and can go as far as they like along the path to collect goods. If you push too far before returning to the ship, you could run out of air and lose everything. Startups is a area influence, set collection game where players are investing in six different companies, but only the biggest investors will receive money from each company. 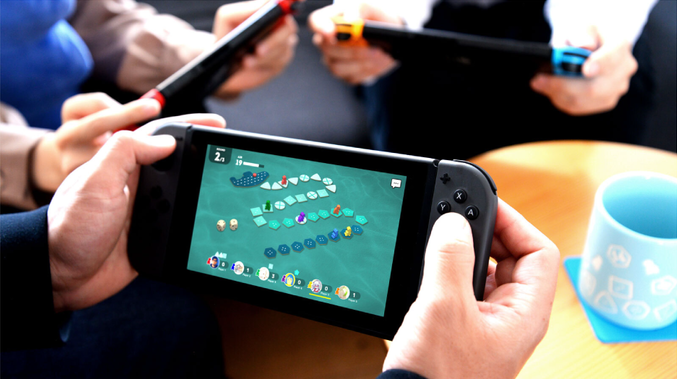 I adore Oink games and the idea of being able to play on my Switch with my friends across the country sounds fantastic! You can check out the rest of the line-up for Oink Games + here on Kickstarter.

Mosaic – A Story of Civilization

Mosaic: A Story of Civilization is a new action selection game where players are building up civilizations. Designed by Glenn Drover (Age of Empires III, Railways of the World, Sid Meier’s Civilization: The Boardgame, and Raccoon Tycoon), Mosaic lets you build cities, advance technologies, construct wonders, assemble you military, and more.  As you forge ahead with your new civilization you can specialize in different aspects and earn yourself some achievements. There are 4 scoring rounds triggered when a scoring card is revealed from one of the 4 decks. After the third scoring card is revealed, players get 1 more round to earn points before the game ends. You gain points for your wonders, projects, and golden ages, and all cards that score for your unique Civilization Components. Whoever earns the most wins! 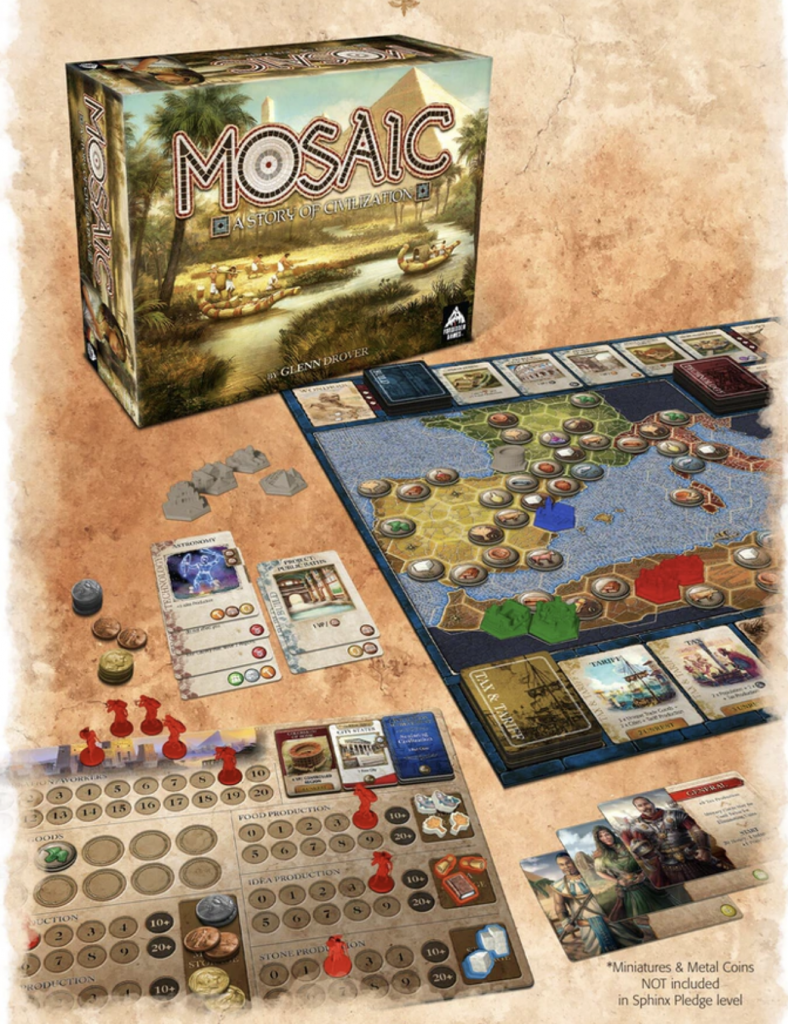 Mosaic looks like the kind of game that you can really dig deep into. There are a ton of different paths to victory and yet the game doesn’t look too complicated. You can learn more about Mosaic: A Story of Civilization here on Kickstarter.

Castle Panic is a cooperative tower defense game that has been expanded and rethemed many times over the years. Now fans can cat excited as Fireside Games is Kickstarting the Deluxe Collection which comes with all new art, components, castle pieces, monster minis, and a brand new expansion called Crowns and Quests. The expansion allows players to select characters and complete quests to help protect the castle. If you really love Castle Panic and want to go all in there is a pledge level that gets you all the new stuff plus all 4 of the previous expansions. 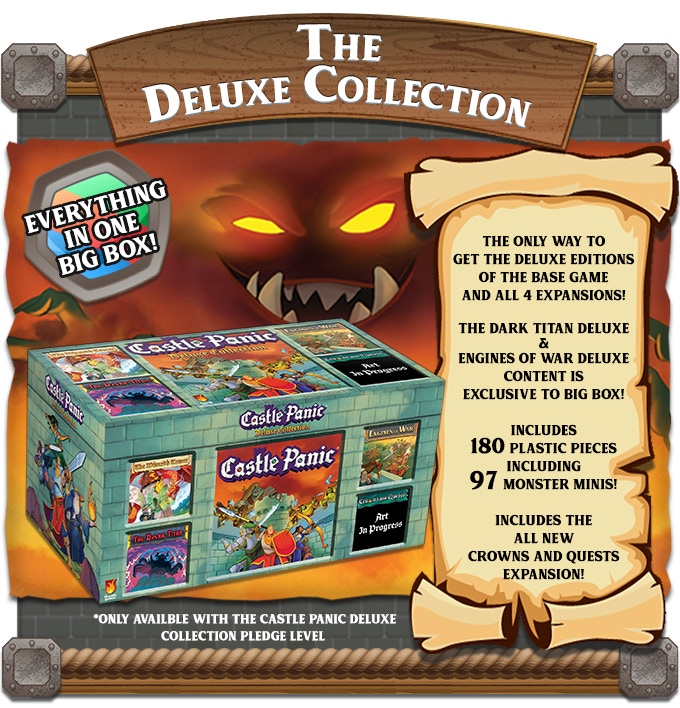 This collection is the perfect way to celebrate a classic game. If you enjoy tower defense games or are looking to upgrade your version of Castle Panic, make sure to check out the Castle Panic Deluxe Collection on Kickstarter here.

MiniQuest Adventures – The Board Book Game

MiniQuest Adventures is a 6 bit video game inspired dungeon crawler game.  each player will choose a hero and their starting equipment and then face off against a dungeon of randomly drawn monsters, threats, and boss to collect loot and save the day. The dungeon itself is a book of maps and when starting a game, the players will roll to see which page they will be exploring. MiniQuest Adventures include 4 different game modes of varying challenge levels to allow you to play on whatever difficulty setting you choose. 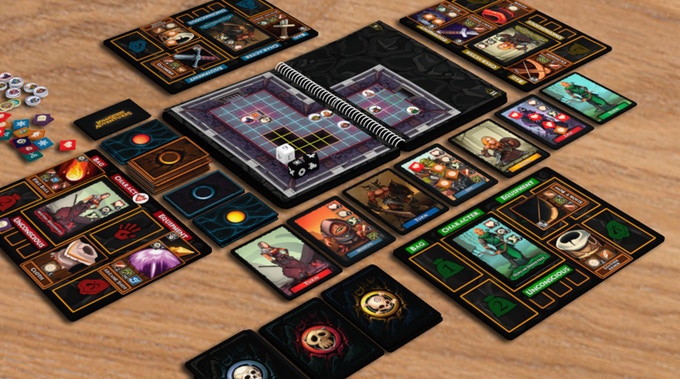 Micro Dojo is a worker placement game for 2 players. In it, you and your opponent are Daimyos who have been tasked by the Shogun to make their town the most prosperous. You’ll need to manage your Ninja, Samurai, Sumo and Geisha meeples  to gain resources and buy buildings that can earn you the Shoguns favour. There is an interesting twist here that you cannot move the last meeple that you or your opponent moved. This means, with some clever planning, you can block your opponent while benefiting yourself. The first person to gain 7 points wins. 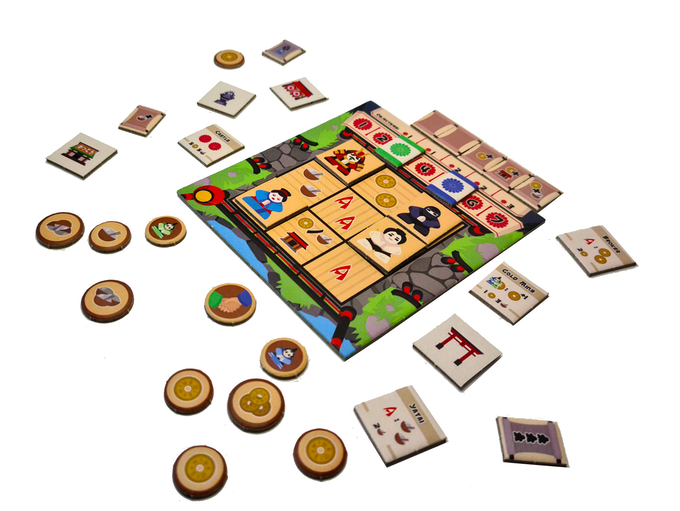 Micro Dojo is a tiny game, making it easy to take anywhere, but don’t let its size fool you. This game looks like it has a nice depth of strategy to it. You can snag yourself a copy by heading over to the Micro Dojo Kickstarter campaign here.