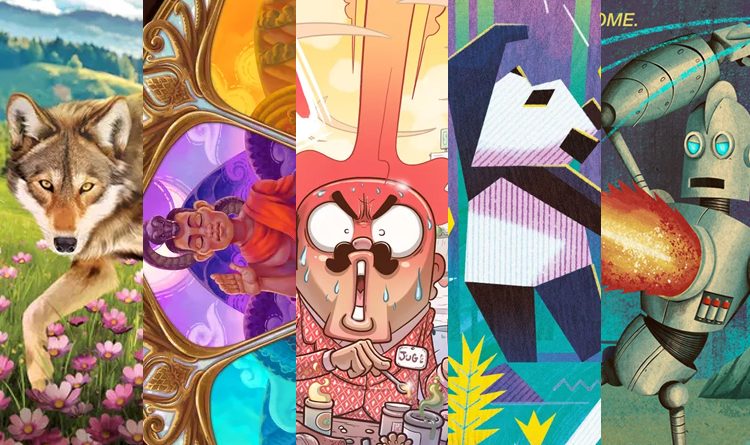 Jess
What are the hot Kickstarters up right now? Let’s take a look!

Keystone: North America is a card-drafting/pattern-building game where players are working to build an interconnected ecosystem. On your turn you can either place a species card into your ecosystem and earn synergy tokens for each shared habitat on all adjacent cards or you can use a skill. You’ll gain points at the end of the game for habitats arranged in numerical order, research tokens earned, any Keystone species in your ecosystem, and for meeting your secret objective. The player with the most points wins!

Keystone: North America looks like a really fun puzzle in its own way. In the beginning of the game it seems like it will be easy to decide where to place cards, but as more join your ecosystem your options will get more and more limited and you’ll need to be strategic in your placements to really make the most of them. Also, the game features the gorgeously rich art of Irem Erbilir and Yan Tambal, making it really eye-catching on the table and a perfect gift for anyone who loves the beauty of nature. Learn more about Keystone: North America here on Kickstarter.

In Buru, you and your competitors take on the roles of a noble emissaries looking to earn the favor of the islanders that call Buru home. Over 5 rounds you’ll need to send your explorers to different parts of the island to gather resources, recruit Islanders, use abilities, and to pay tribute to the spirits of the island. Each explorer has a secret value between 1 and 5 and actions are taken in each region will happen from highest to lowest Power so be strategic in where you place them. Each region will let you take a different action. You’ll earn the islanders esteem by fulfilling tasks, paying tribute, and pleasing the Elders. Whoever earned the most Esteem at the end of the 5th round wins! 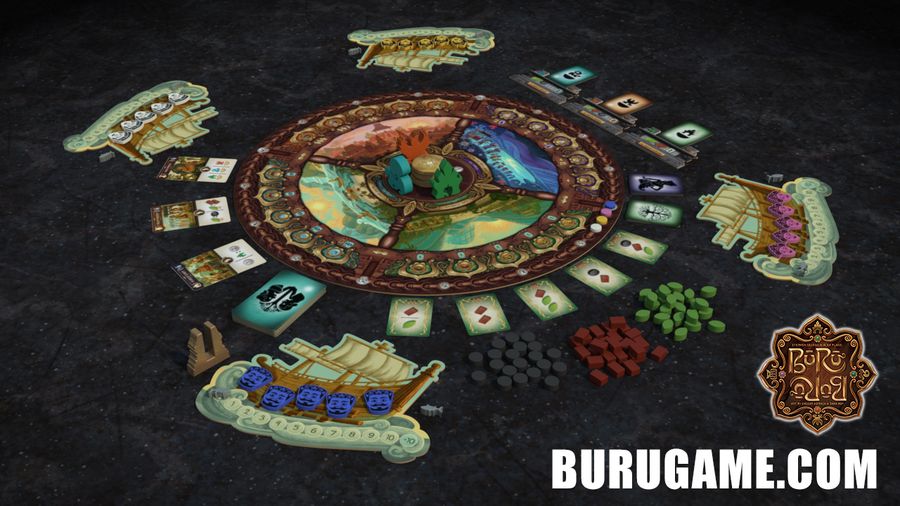 It’s nice to see a Euro game that focuses on creating positive relationships with native populations instead of awful colonialist themes. I think the bidding mechanics of placing your explorers looks to be light, yet strategic making it easier to teach and quick to start playing. I love the color palette and the fact that the developers had a staff of cultural consultants for the game. You can check out Buru on Kickstarter here to learn more.

Buurn is a set-collection game with an exciting auction mechanic where players take on the roles of chefs competing in a hot sauce contest. Each turn actions will be auctioned off in a unique way. The actions are represented by totems that are set up on the board and at the beginning of the auction 1 player will start the countdown. You can decide to purchase an action at any point during the countdown, but whatever number has been announced at that moment is what you will pay. You want to hold out as long as you can so you pay the least amount of money, but your competitors could snatch the totem before you can if you don’t seize the initiative. Depending on how worthwhile the ingredients in the offer are, you might want to buy at a high price to guarantee you get what you want. Once a player buys a totem the rest of the action totems are up for grabs…literally. All other players are free to grab whatever totem they want, so everyone has to pounce fast. Once everyone has their totem, they’ll take their actions (gathering ingredients, collecting money, or using organization cards). At the end of the game whoever has gathered the best ingredients for the their hot sauce wins! 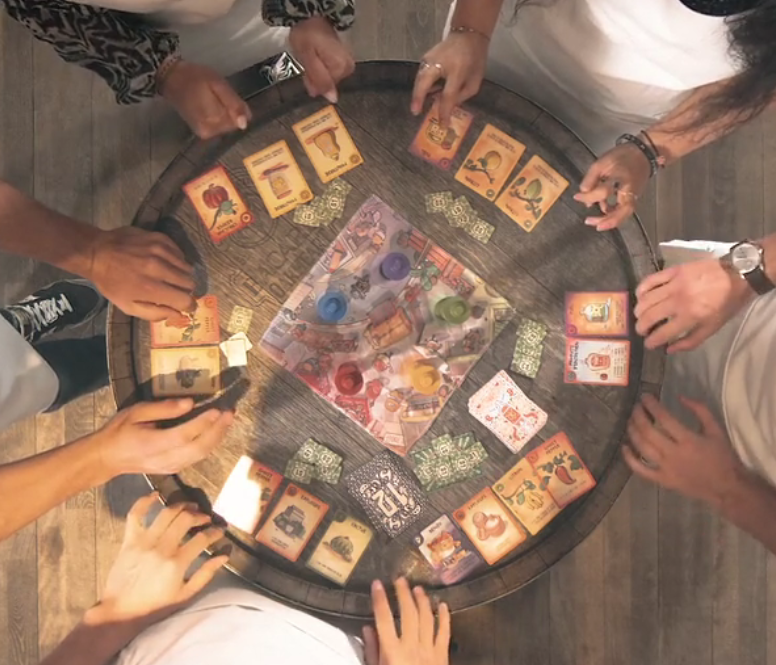 Buurn is a game about timing and risk assessment. You have to be bold about your bidding and sensitive to how risk-adverse your opponents are to win. The art is goofy and really plays up the theme well. If you like some physical action mixed into a quick-playing auction game, then make sure to check out Buurn on Kickstarter here.

In Pilfering Pandas the players take on the roles of troublesome Pandas trying to escape the zoo with the help of some bribable meerkats. Played either cooperatively or competitively, this set collection game challenges players to move around the board trying to stay ahead of the zookeeper until they reach an escape zone. To do this you must satisfy the Meerkat’s requirements by playing stolen food cards to them so that they will help you advance. You can play as many cards to a meerkat as you like so long as it contains either ascending or descending runs of cards in the same suit or matching numbers of different suits. Every time you play a set you’ll advance your panda based on the set you played, but you must also advance the zookeeper. How you play your sets will affect how the different pawns move, so you have to consider the risks you are willing to take to escape. Also Meerkats have limits to the amount of food they can take and once you meet that limit the zookeeper will advance faster. If you manage to reach the escape area before the zookeeper nabs your panda, you win! 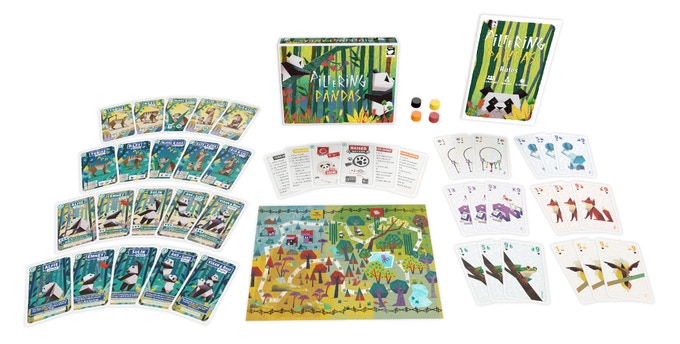 Pilfering Pandas is a challenging little game and you can increase the difficulty to suit your tastes by adding Foiled Plans cards, removing cards from the deck, or decreasing the Meerkat limit. I really enjoy the stylized art for the game and the illustrations add a whimsical feel to the game. Wren Games has added digital versions of the game to try for free on ios, Android, Tabletop Simulator, and Tabletopia. You can learn more about Pilfering Pandas here on Kickstarter.

Paperback Adventures is the third installment to Tim Fower’s fun word game series that includes Paperback and Hardback. Similar to previous games, Paperback Adventures is a deck building game where you’ll be using cards to spell words, but instead of competing against other players, this solo player game pits you against AI enemies. You take on the role of one of the three protagonist characters. Each one has their own play style and unique deck, so you can have some variety in your various playthroughs. You’ll need to equip cool items, fight against enemies, and become a master wordsmith to win. 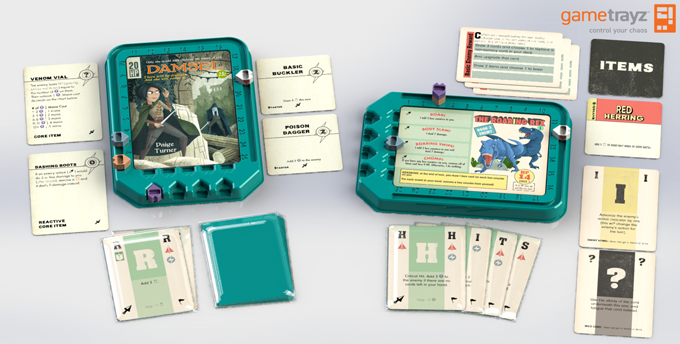 I adore the previous games in the series and Paperback Adventures  looks like a really neat twist on deck building. I like that it seems to have a rogue-like feel; having you face off against randomized enemies of increasing difficulty with random rewards as you go. No two runs will ever be exactly the same. If you like word games make sure to check out Paperback Adventures on Kickstarter here!