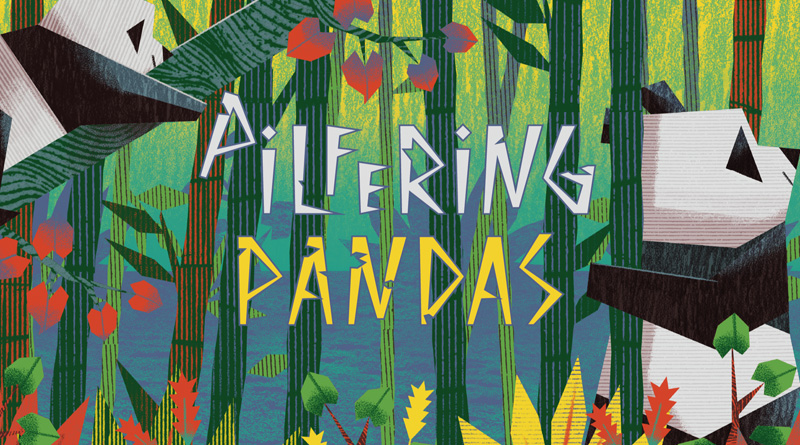 The Pandas of Pilfering Pandas have had a pretty sweet gig at the zoo – lots of leisure time to lounge, no fighting with other animals for space, and a veritable buffet of bamboo.  But now, these pandas have decided that freedom is the most delicious meal of all, and have hatched a plan to escape the zoo and run free!  With the help of some bribable meerkats and with the zookeeper hot on their heels, the pandas had better pilfer fast so that they can make good on their escape! 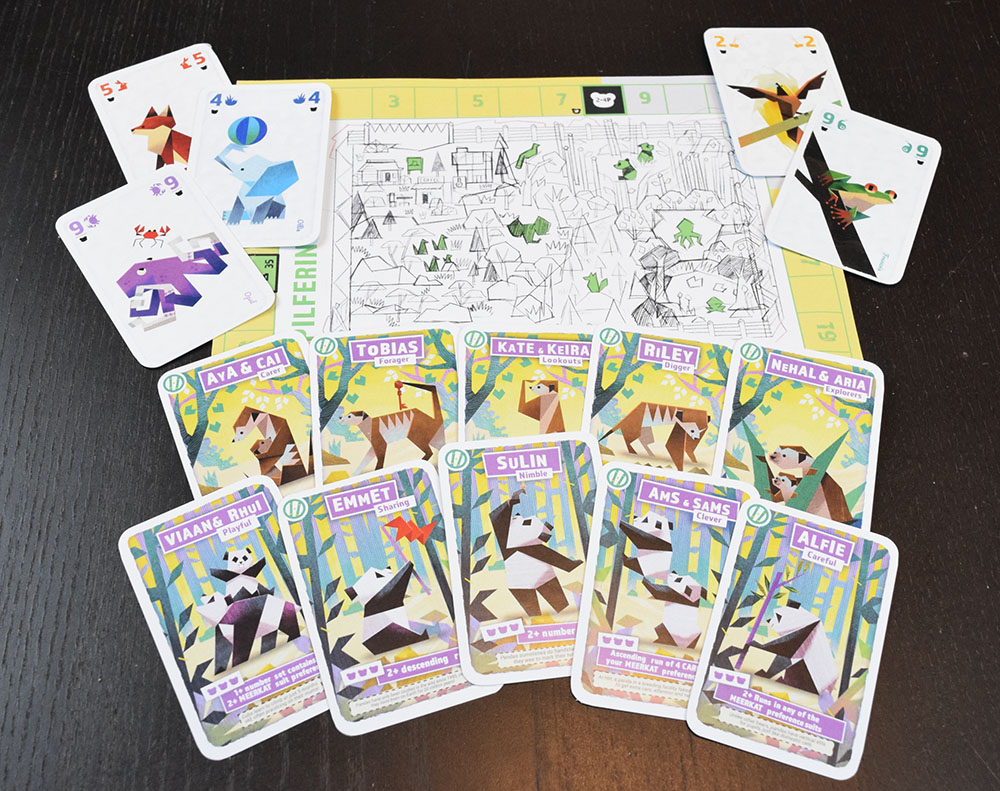 Pilfering Pandas is a set collection and hand management game where your objective is to trade enough food to the meerkats to cover your movements until you can escape.  It can be played competitively, cooperatively, or solo, with rules adjustments for each.  Please note that, for this preview, we are focusing on the cooperative gameplay experience, but broadly-speaking, each turn you’ll begin by drafting loot cards into your hand, and then you’ll use those cards to bribe your meerkat accomplices in order to keep the zookeeper off your trail long enough to attempt their final escape. 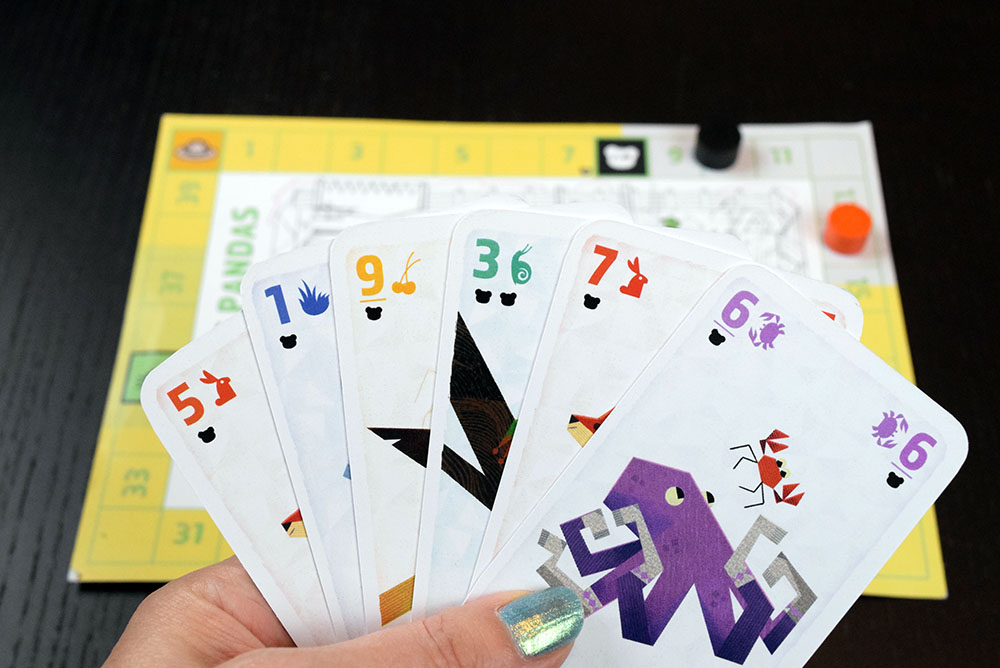 When you draft cards, you can either take one from the face-up offer, one off the face-down deck, or multiple from the face-up offer at the cost of raising the zookeeper’s suspicion.  Do that too often and you’ll regret it!  Once your hand is refreshed, you’ll take as many actions as you want, building and extending sets of cards according to the requirements of the meerkats, who have preferences for specific food.  The sets you place down will either need to be runs of a single suit or sets of the same value across multiple suits.  There are key cards that act as wilds, but using them will also get the attention of the zookeeper, who will advance along the track in pursuit of your pandas! (Note that in the competitive game, wilds have no real down-side when you use them) 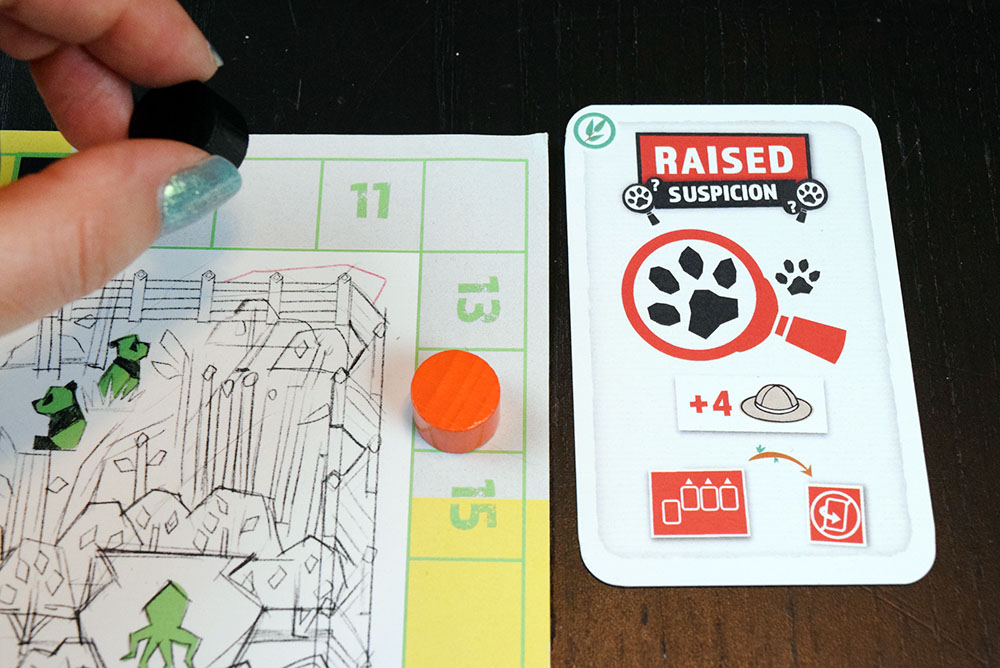 Jess
Of course, if you’ve got the cards to do it, you’ll probably be tempted to empty your hand as quickly as possible, since playing suits lets you move along the escape track towards victory!

Andrew
Right! But that’s dangerous – the meerkats have limits on what they can carry before the zookeeper gets suspicious and comes charging after you, in the cooperative game, anyway. But regardless, you’ve really got to pick your moment to make big plays. 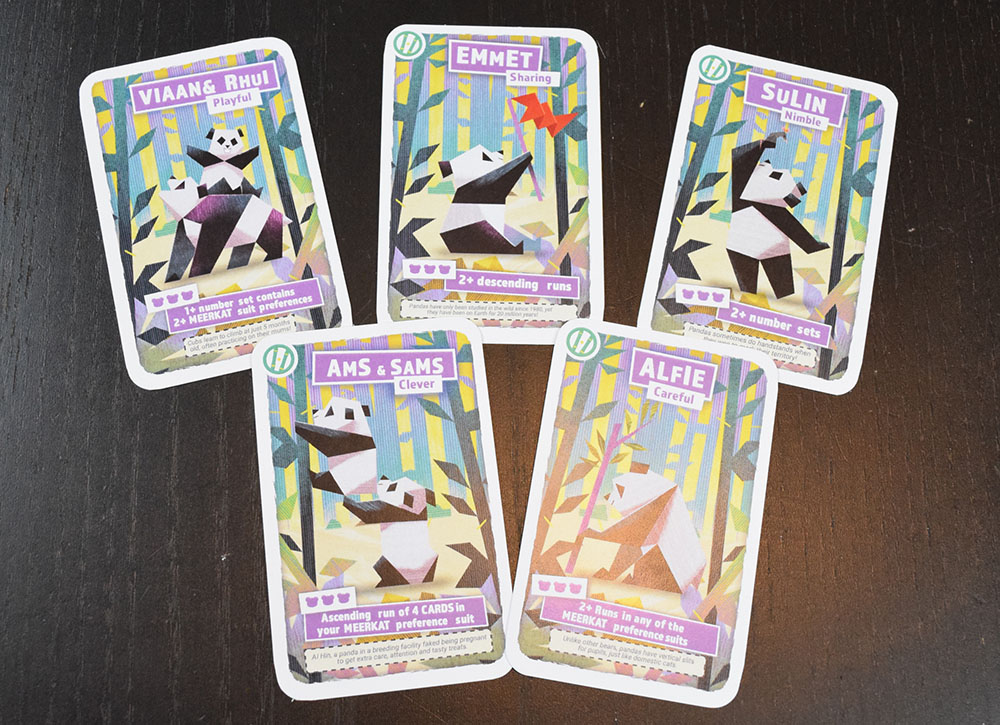 Once player’s hand is empty, the end of the game is triggered and all pandas attempt their final escape.  The cards they are still carrying will count against them, but if you’ve managed to build up enough of a head-start that even after that movement you’ve not been caught, then your panda’s escape and you win! 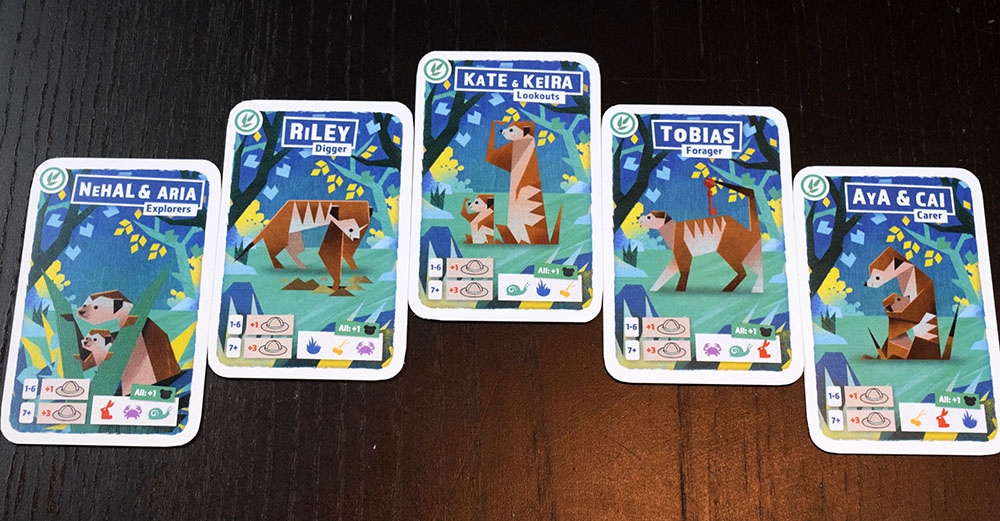 Andrew
So I’ve got to say, Pilfering Pandas wasn’t the game I was expecting when I first saw it.  I mean, we didn’t even, you know, pilfer!

Jess
No, all the pilfering actually happened before the game. But I know what you mean – the art, which is FANTASTIC, made me think it was going to be a lighter game. But Pilfering Pandas is actually a really strategic hand management game that’s mostly abstract with a gorgeous aesthetic on top.

Andrew
Very thinky – you’ve got to plan your moves carefully because, at least in our plays, the margins of error were really quite slim. The game makes it hard to feel like you’re ever not at least in a little danger of the zookeeper catching up to you.

Jess
Yeah, Pilfering Pandas might look cute and cuddly, but the gameplay is actually pretty tight. Maybe a little too tight for my taste, to be honest.

Andrew
Gotta say, I think I agree. Pilfering Pandas is the sort of game that rewards careful planning and execution of your hand-management strategy – there’s nothing breezy or light about it, and it’s possible to feel pretty trapped as you try to draw just the right cards to make your big play, all the while watching as the draw deck empties, your opponents charge towards ending the game, or the zookeeper relentlessly chasing you down. 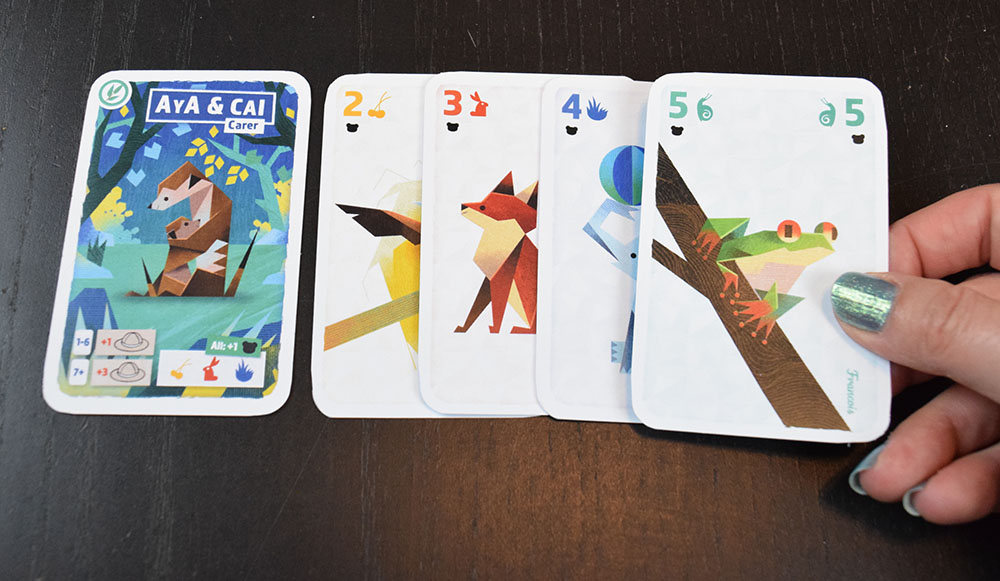 That said, while Pilfering Pandas wasn’t a perfect fit for our taste, we definitely suggest checking out the Kickstarter for those of you who are interested in a precise, tactical card game with excellent art!