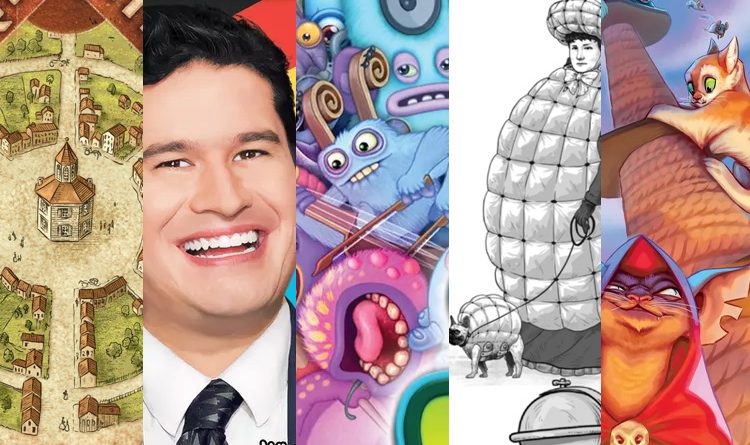 Jess
Hello Friday! This week went so fast. I have to settle down with some fun Kickstarters to unwind. Let’s see what caught my eye this week!

In Squaring Circleville, players are deconstructing and reconstructing the town of Circleville to change the towns circular nature to a more crowd-pleasing square shape. Throughout the game you’ll be demolishing roads and buildings and rebuilding them, gaining equipment, beautifying the city, and claiming achievements. Each turn players will move their workers around a rondel. Where they land determines what actions they can take, but you also take the topmost color tile next to that space. Color tiles are added to your board and build up your power level for different types of actions as well as unlocking powerful alternate action types. The game ends once the last section of Circleville is completed. Whoever earned the most points from their hard work wins! 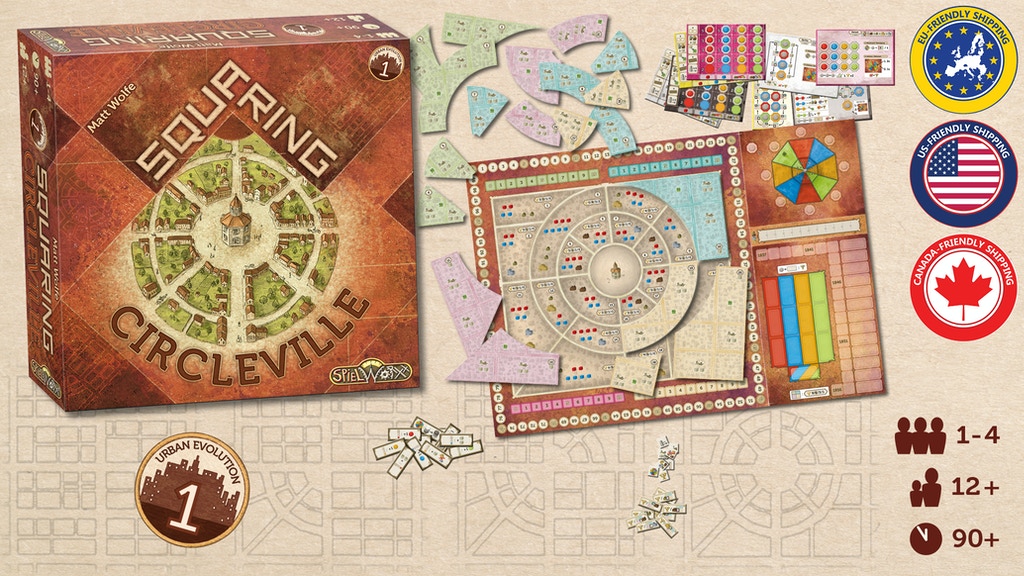 I love that Squaring Circleville is based on a quirky, little piece of history. There really is a town of Circleville and they really did have to rebuild when the residents petitioned to change the shape of the town. Its clever how designer Matt Wolfe uses the rodel actions to building up of your power levels; giving you ever increasing influence over the city. Want to learn more? Check out Squaring Circleville on Kickstarter here.

Um, Actually is a CollegeHumor show about Nerdy trivia and now you can take the fun home with you in the Um, Actually card game. At the start of the game you’ll construct the game deck by mixing together sets of questions from different categories (Fantasy, Cartoons, Comics, Sci-Fi, and more). Players take turns being the host and will read a trivia statement out loud. Each statement has a piece of incorrect information in it and the other players must try to correctly identify what is wrong and correct the statement, but they must always remember to start their answer with “Um, Actually”. The statement cards have clues that the host can share if all the players get stuck. After every 3rd statement the players will get a Shiny Question. These questions will challenge players to write up lists, draw things, spell made-up words, or match things together. Whoever earns the most points wins. 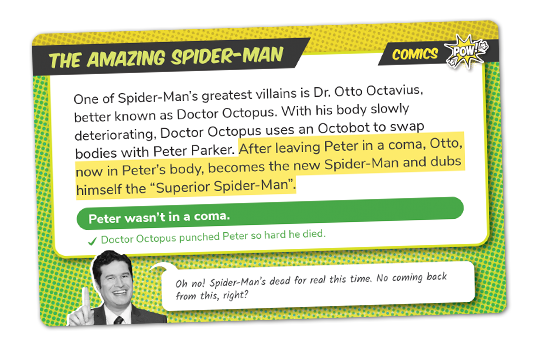 Um, Actually sounds like a great party game for groups who enjoy geek culture. I like that you can select what themes the game will ask about so if you have a group that particularly loves something, you can narrow down the focus to that subject and really let the players trivia skills shine. You can get a copy of Um, Actually on Kickstarter here.

My Singing Monsters: The Board Game

My Singing Monsters is a worker placement game based off of the My Singing Monsters video game, where players are breeding monsters and collecting elements to create songs. On your turn you will place a Monster from your hand onto an Island and trigger that island’s action while collecting the elements displayed on your monster. If the island has another monster on it, you can breed the two. This allows you to draw a new monster that has the the combined Elements of both Monsters. Elements can be used to fill song track cards which when completed earn you gold coins. Whoever has the most gold coins at the end of the game wins! 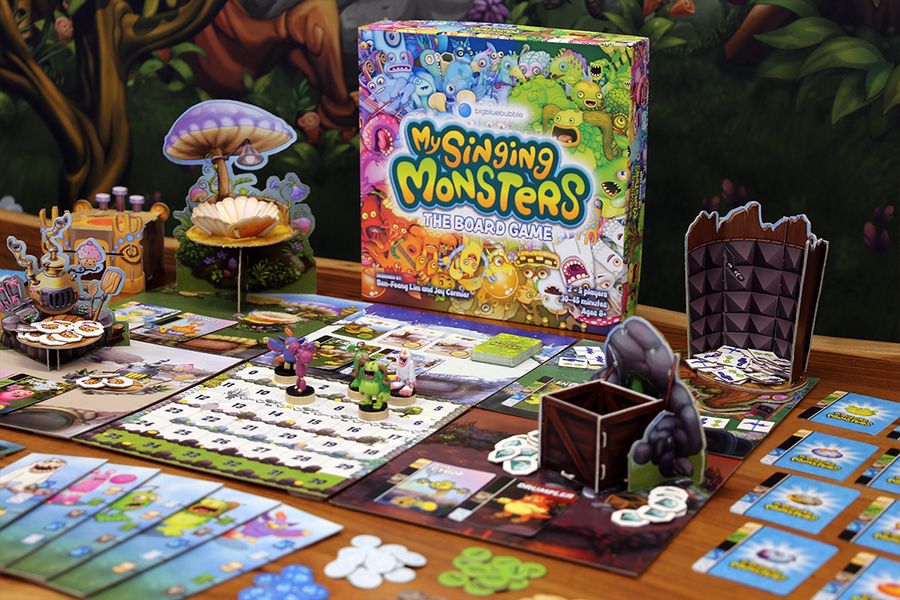 My Singing Monsters looks cute, fast, and fun. I like that it is build with a scaling difficulty so you can adjust up or down for new or younger players. The minis are super cute and I think the whole game just looks whimsically wonderful. Learn more about My Singing Monsters here on Kickstarter.

WHAT THE WHAT?! is a party game about wacky inventions. Each turn one player will be the investor and draw a card that displays a real historical invention. Players will then have 30 seconds to pitch what they think it could be used for or they can use a prompt card. The investor picks the pitch they liked the most and awards that player points based on what kind of pitch they used. You get 3 points for an original pitch, 2 points for using a prompt card, and 1 if you guessed the actual use for the invention. 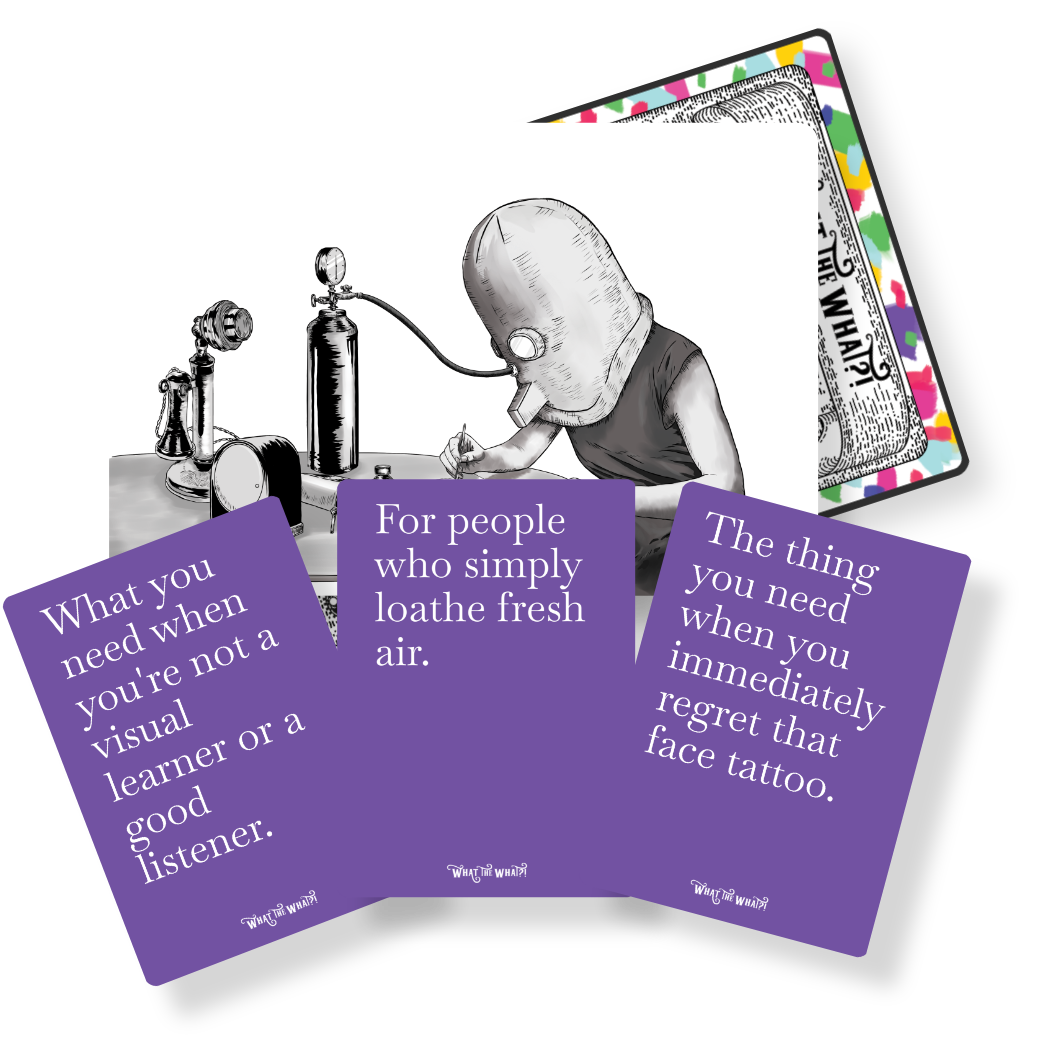 It’s simple, quick, and silly. Just how I like my party games. What really appeals to me about WHAT THE WHAT?! is that you have the option to use prompt cards or not. This allows player who feel like they may not be as imaginative as their fellow players to still participate and enjoy the game without the pressure of trying to create on a time limit. Check out WHAT THE WHAT?! on Kickstarter here.

CATastrophe: A Game of 9 Lives

CATastrophe is a ridiculous player vs player game of brawling cats. The goal of the game is to be the last cat standing. Each cat has 9 lives (of course) and on their turn they can play any number of cards from their hand. Cards include attacks, reactions, curiosities, and allies. After you actions you’ll draw three cards and then reveal the top card of the CATastrophe deck. CATastrophe cards will instruct the players to do thing like play minis games that will cost the loser of the game a life. The CATastrophe deck also contains the Grim Reapurr. This villainous cat card will move the Reapurr along the life track and if your cat is ever on the same space as the Reapurr you are eliminated. 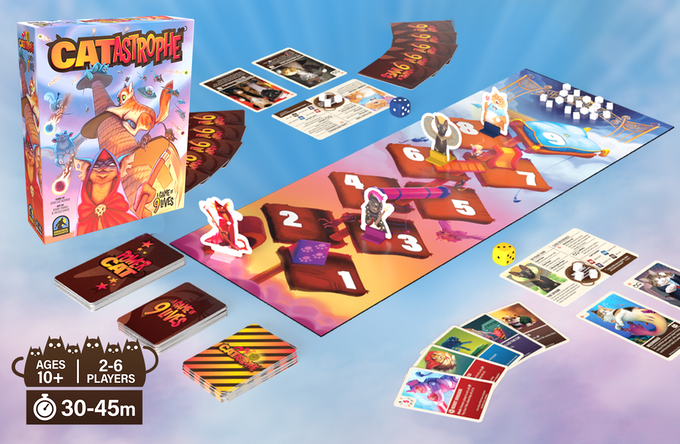 While i don’t usually like elimination games, I am a sucker for cats and oddball themes, so CATastrophe caught my attention. You can find out more by heading on over to the CATastrophe Kickstarter here.