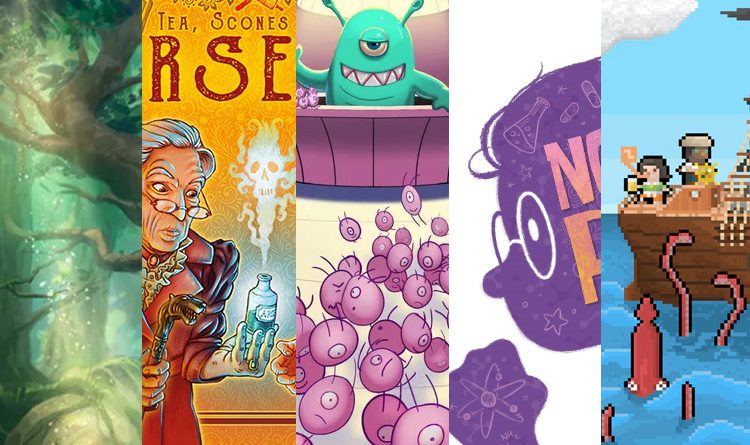 Forests of Pangaia is a set collection and area influence game where players take on the roles of forest spirits charged with bringing life to the world. You’ll need to grow your forest, complete rituals, and try to earn the most life energy in order to win the game. On your turn you will check which seeds become trees, move your spirit around the board to take actions and plant new seeds, and then you can spend resources to grow your trees even bigger. Rituals ar goal cards that can be fulfilled by growing your forest in a certain way. If you complete a ritual you’ll receive life energy and the person with the most energy at the end of the game wins. 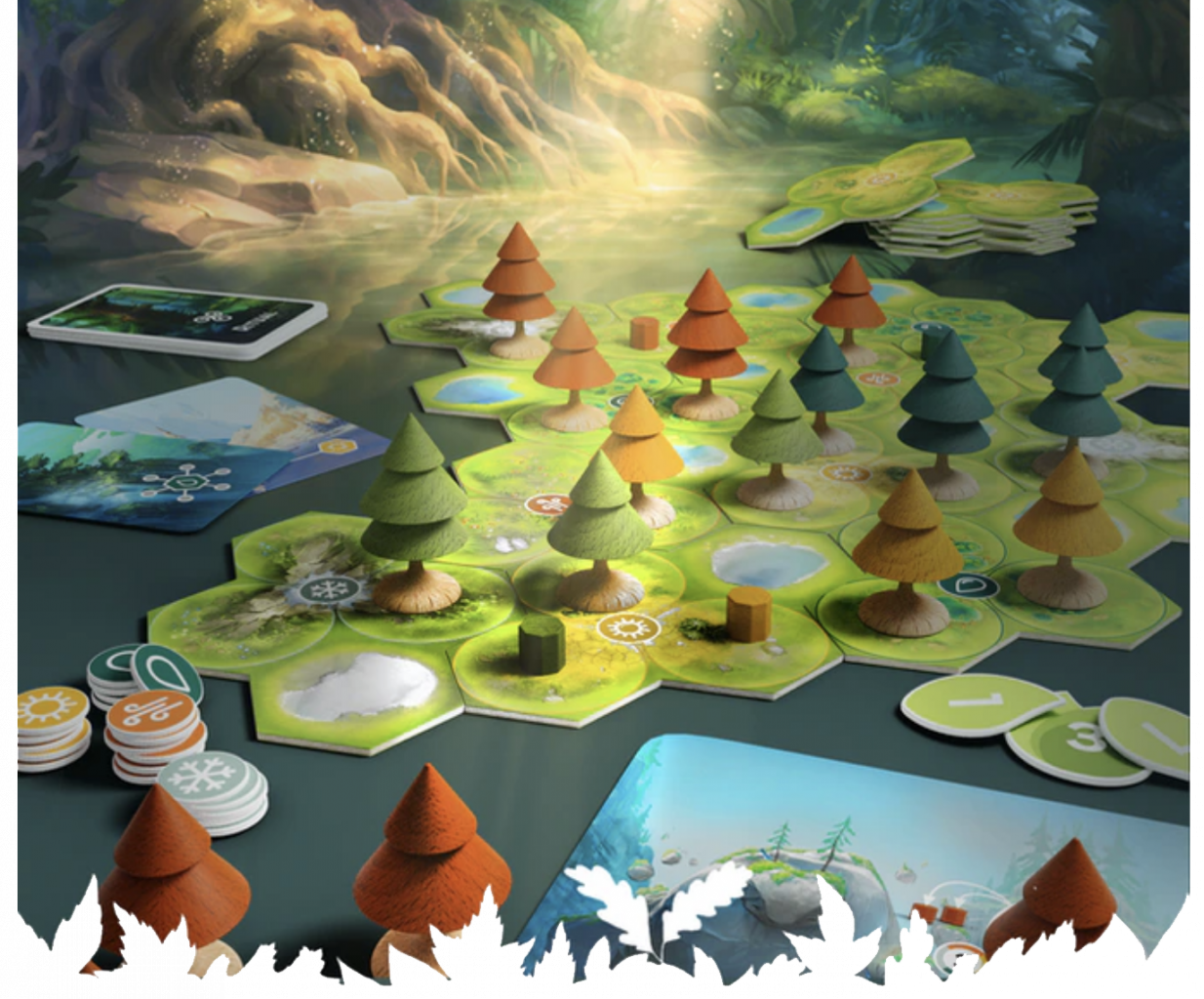 Forests of Pangaia is absolutely beautiful. I love the wooden trees and the serene color palette. This looks like a really chill game with a little bit of contention when it comes to sharing space on the map. Learn more about Forests of Pangaia on Kickstarter here.

Tea, Scones, and ARSENIC is a bluffing and push-your-luck game where players take on the roles of English aristocrats fighting over the family fortune. Everyone wants to inherit so during a family gathering everyone has decided to poison the scones with Arsenic. Great families think alike I guess? During the game, players will take turns drawing scones from the box (Each poisoned scone has a varying amount of poison in it) secretly checking if they are poisoned, and then deciding if they will keep the scone in their cup or put it back in the box and take a sugar cube instead. Once you run out of sugar cubes you must “eat” the scones in your cup. If you the poison on the scones adds up to a lethal dose, then you are out of the game. 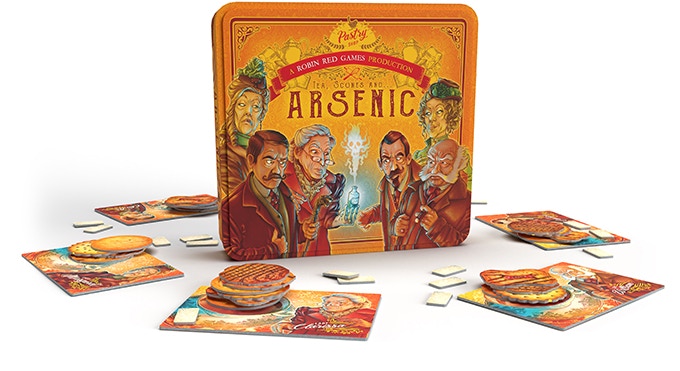 This seems like a fun party game that is ripe with opportunity for some LARPing. I would totally invite people to get dressed up and serve actual tea and scones while playing. You can learn more about Tea, Scones, and ARSENIC here on Kickstarter.

In Alien Petshop, you’ll take on the role of a petshop owner doing their best to run their business and take care of the strange creatures they sell. It’s a worker-placement and engine building game and family friendly. On your turn you roll dice and assign them as workers to care for and maybe even create new pets. Of course running your business is not all fun and games. You’ll have to deal with hazards which can really cause some chaos. Your pets can spawn new creatures to be put up for sale earning you space credits. You can earn victory points by earning award cards or stealing them from other shops as well as from some of the cards you play. At the end of the game, the player with the most credits and victory points wins! 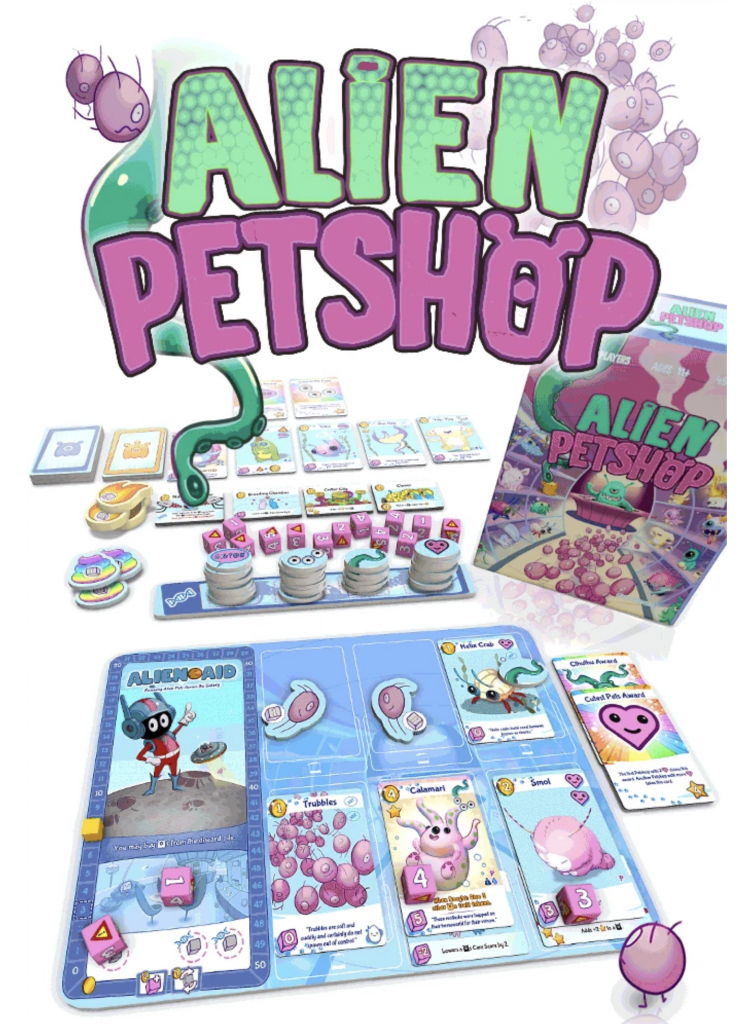 It’s cute and I like how you can mutate pets to add traits to them. While it is a family friendly game, I suspect there is enough there to keep all the adults entertained throughout the game. You can check out Alien Petshop here on Kickstarter.

Science is all about discovery, learning, and winning those sweet, sweet nobel prizes. Or at least that’s what Nobel Run is about. Nobel Run is a deck-building game where you will be managing a team of scientists trying to earn enough prestige to win the Nobel prize. You’ll need to manage your research team, hire predocs, postdocs, and senior staff, publish articles, and secure funding. You earn prestige points for publishing papers, getting grants, hiring staff, and from scientists and inventors. During the game you’ll encounter unforeseen situation cards which will make life a little more difficult. The first scientist to earn 20 points wins! 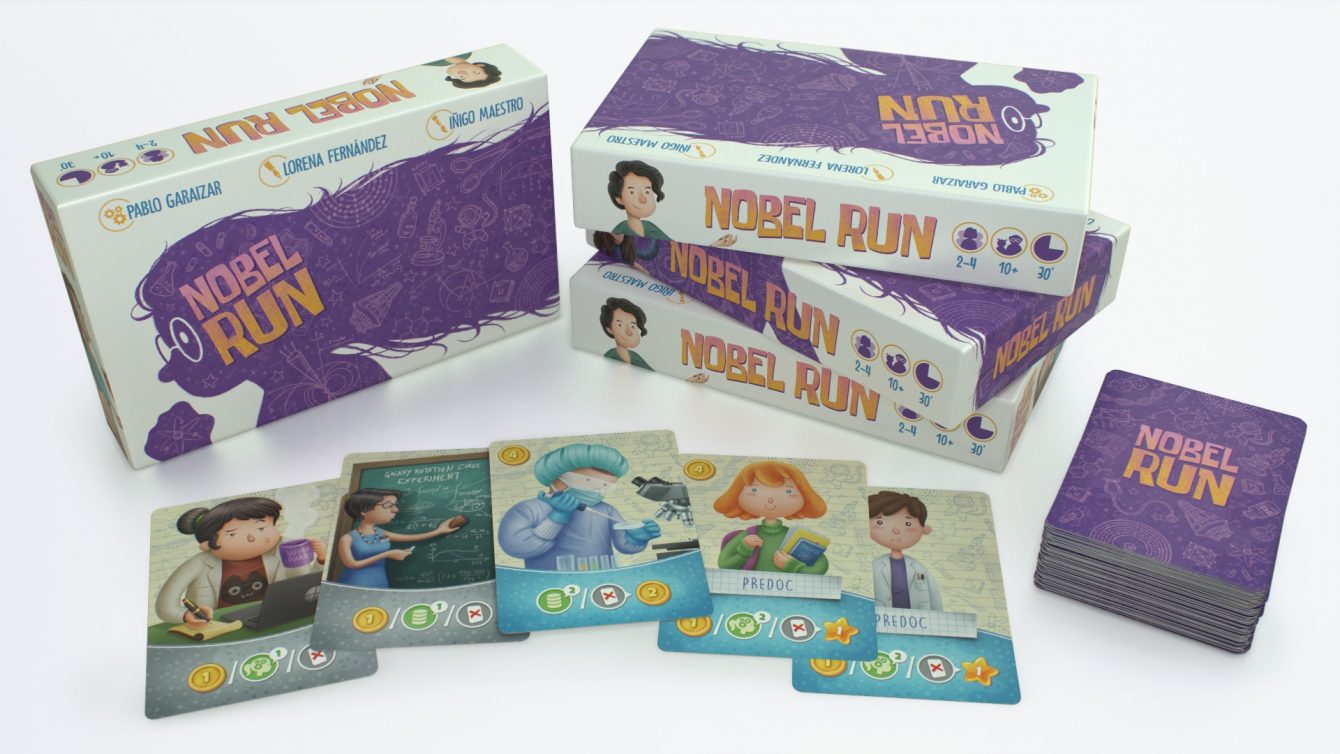 I love a good deck-builder and Nobel Run is really thematic and some fantastic art that gives it a humorous bend. If you are or have a scientist in your life and like deck-builders then this game might be perfect for you. Research more about Nobel Run here on Kickstarter.

To The Death! Deluxe Edition

In To the Death, 1-2 players will controlling groups of heroes fighting against an onslaught of monsters. Each round you’ll draw a hand of cards from the arsenal deck that will aid you in your battles and fight against the monsters. This is a reprint of the original game with extra heroes and add-ons to up your gameplay experience. 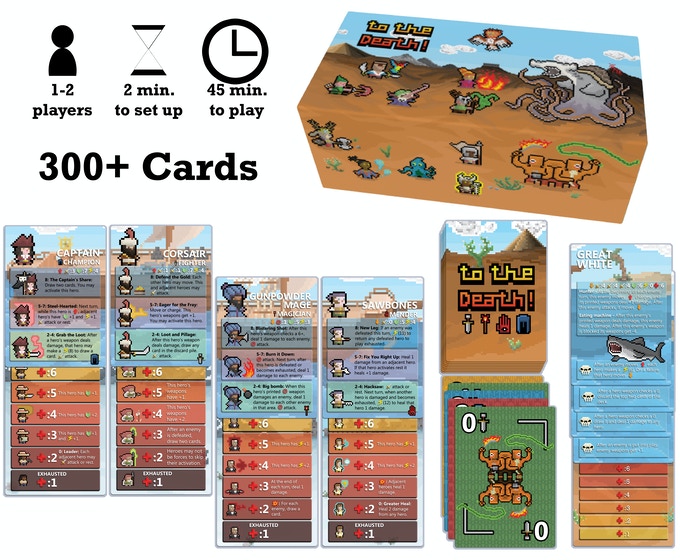 To the Death  is a pretty straight forward skirmish game with some great pixel art that give it that old-school video game feel. Where I expect it to shine is the variety of heroes and monsters. There are 176 heroes and 108 monster cards, so it seems like you can play the game over and over again and rarely have the same experience twice. Learn more about To the Death on Kickstarter here.