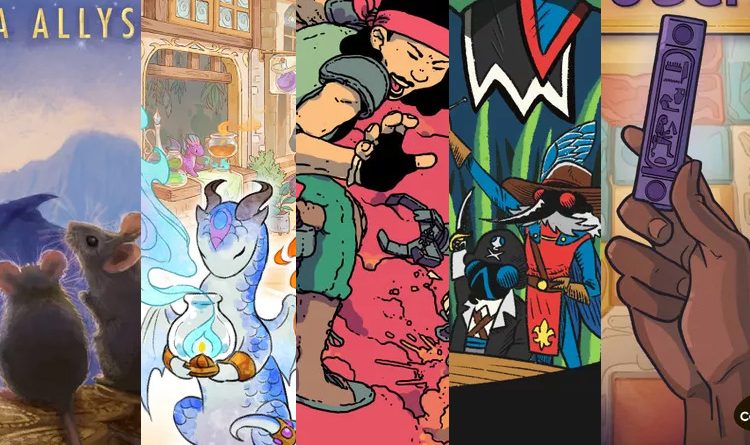 Jess
Hey there Friday. What bounty of delightful and devious games have you brought us today? Let’s find out!

We’ll be putting out a full preview of the game this weekend, but the quick summary is this: According to Wicked & Wise lore, Dragons love to compete, especially when it comes to treasure, and trick taking games are totally their jam. To give them the edge, dragons like to ally with mice who can manipulate the trick in their favor. Wicked & Wise is a team based game, although you can play it with only two players. During a round each team of Dragons and Mice or Duals (people who play both roles) will choose a goal they are trying to meet. Then you will play out a normal trick with the starting dragon setting the first card of the trick and everyone else trying to match the lead suit. Dragons must try to beat the card previously played, while mice play cards to activate the abilities on them. Whoever played the highest card of the suit or a trump card wins the trick and their team can decide to get a treasure or some coins. Whatever they don’t choose goes to the losing team. The round ends after 5 tricks and your team will earn coins for meeting the terms of your goal or lose them if you failed. At the end of the game, the team with the most coins wins! 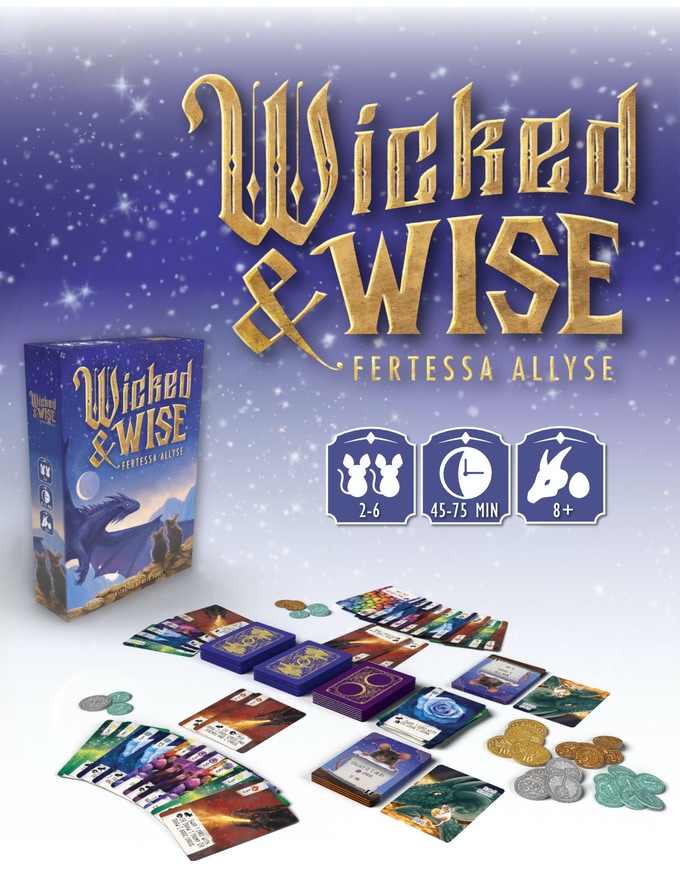 Wicked & Wise is a twist on the classic card game Euchre. It gives players the opportunity to play asymmetrical roles and the addition of the goals to the game is interesting. The goals force you to adjust your strategy each turn. If you enjoy trick-taking with a good dose of collaboration and strategy, make sure to check out Wicked & Wise on Kickstarter here!

I want to live in a world where tiny artisan dragons help shopkeepers run their businesses. Flamecraft lets me live out this fantasy in its worker-placement style game about managing dragons. As flamekeepers, the players must aid the town and gain reputation points by placing dragons, enchanting businesses, and expanding the shops. On your turn you will move your dragon pawn to a shop and then decide if you will gather or enchant. Gathering lets you gain the resources that shop produces and then decide if you want to assign a dragon card to the shop. When enchanting you will place an Enchantment card on the shop and gain the reward shown. Dragons and Enchantments enhance what the shop produces, making those spots more valuable to visit. You can gain coins or reputation based on what you place at a shop and the player with the most reputation at the end of the game wins!

The game is ADORABLE and the theme is wonderfully gentle. I love games that feel additive, with each thing you do making a positive impact on the experience instead of taking things away or punishing you or other players for your actions. Flamecraft looks sweet and fun and I totally recommend checking it out on Kickstarter here.

Dustbiters is a speedy racing game about cars trying to outrun a dust storm. In this 2 player game, each player will control several cars that are part of a convoy and on your turn you will have 3 actions to spend. Those actions can be draw a new card, place a car at the head of the convoy, move a car, and use a car power. At the end of the turn the last car in the convoy is devoured by the storm. The game ends when there is only one car left, so maneuver yours to be at the head of the pack to ensure your victory. 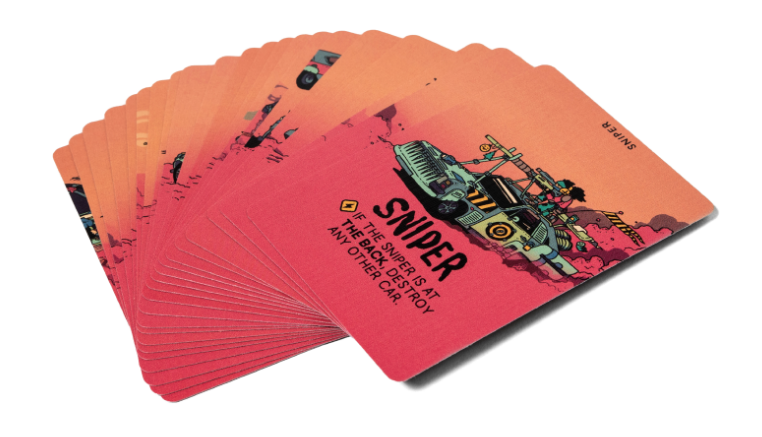 I don’t enjoy player elimination games, but seeing as there are only 2 players in Dustbiters, there’s none of that “sitting around waiting while your friends all finish the game without you” feeling. The theme is kooky, the art fun, and my overall feel is that this one will be a nice travel game since it is only a deck of cards. Race you way over to Dustbiters on Kickstarter here to learn more.

I have to say, when I think about a council of bugs getting together to discuss important matters I did not expect them to be talking bout income tax reform. Thankfully Bug Council of Backyardia involves less changing how the government handles you money and more mancala and trick-taking. The game is composed of 10 tricks and as with most trick-taking games someone will establish the lead suit and players will take turns trying to beat it. Whoever played the highest card in strongest suit is the winner of the trick and whoever played the lowest card gets to manipulate the council. The council is what determines which suit is the highest. So the game becomes a delicate balance. Of course you want to win, but the more you win, the less control you have over what suits will dominate and at the end of the game players earn 1 point for every trick they won plus every cube on their faction. 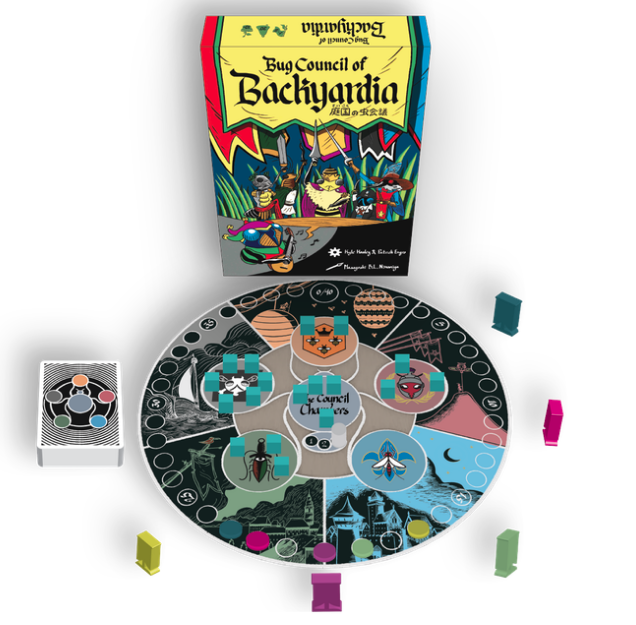 Bug Council of Backyardia is fascinating. I like that the area-control aspect of it is a game of mancala. Every time manipulate the council you will take all the cubes from one faction and redistribute them clockwise to the other factions. This means that you’ll have to plan around who you are helping when you choose where to take from. Bug Council of Backyardia looks very strategic and thinky. Learn more about it on Kickstarter here.

Cartouche is a drafting and tile laying game about restoring egyptian murals. Each turn players will draft mural tiles and story cards. By placing tiles on their mural boards, they can collect story tokens for any animals next to the tile. The story cards are goals which can be fulfilled with story tokens and specific placements of tiles. Each completed story card is worth victory points at the end of the game. You can also gain points for completing achievements and leftover tokens and tiles at the end of the game. After 10 rounds, whoever earns the most points wins! 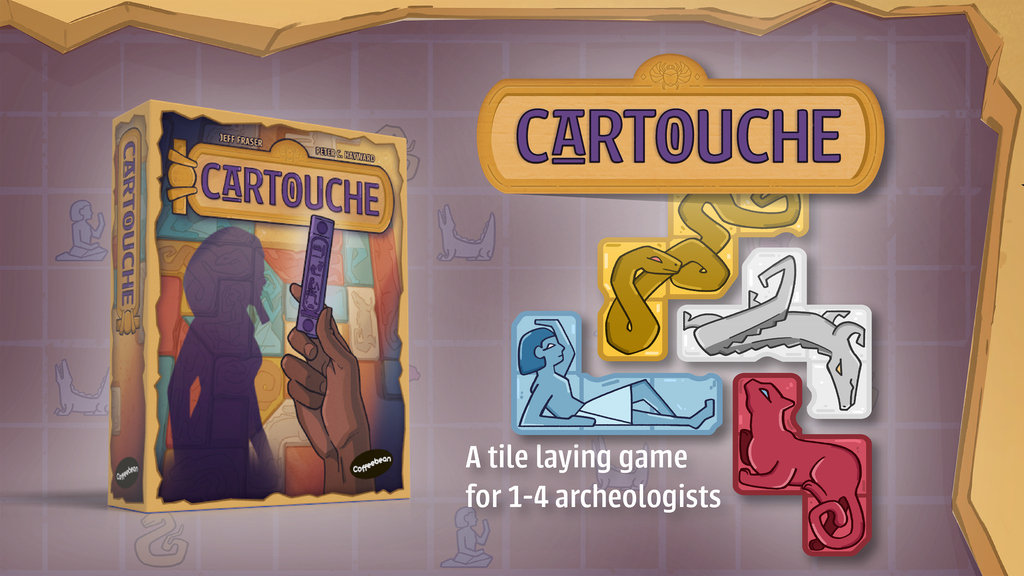 I always love a fun little puzzley game and I like how the drafting portion of the game is set up so you really have to figure out what your priority draft will be, because if on your turn you draft a tile, when the turn comes back to you, the card you wanted might not be there anymore.  It seems like a game where the choices are limited, but meaningful. Check out Cartouche on Kickstarter here to learn more.