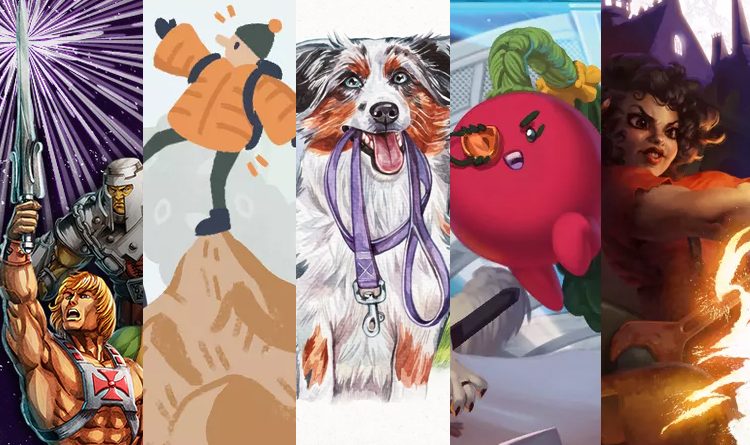 Masters of the Universe: The Board Game – Clash for Eternia

Here’s a big ol’ dose of nostalgia. The classic 80’s cartoon He-Man has been turned into a cooperative or team based adventure in the world of Eternia. The game is scenario-driven with each side of a conflict being controlled by either players or an AI. The game includes a ton of the original characters to play and each one has their own special abilities and skills. The game uses programmatic-style mechanics for turn order, so each turn players will determine the order their characters will activate. The Evil side will slot in their character first facedown and then the Heroic team will add theirs. With the cards being added this way, you really need to try to out-think your opponent. 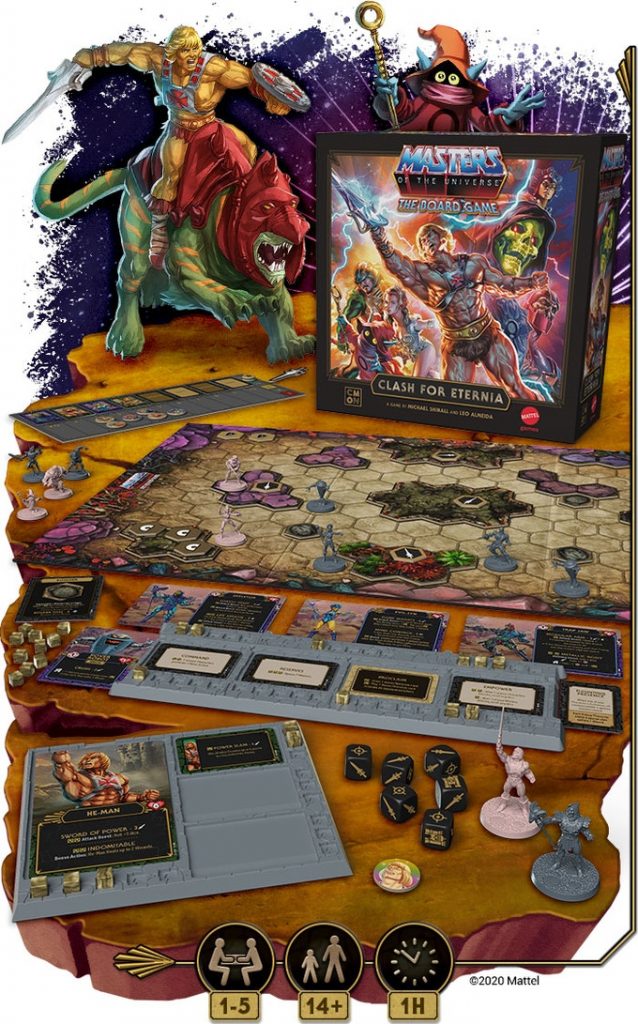 This looks like a great gift for any fan of the old show. As is expected from CMON, the art and the minis look amazing and the gameplay looks like a fun skirmish between He-Man’s allies and Skeletor’s minions. You can learn more about Masters of the Universe: The Board Game – Clash For Eternia here on Kickstarter!

Unsurmountable is a solo, puzzle game where you will be trying to ascend a dangerous mountain. During the game, you will set up a row of 5 cards that act as your hand, but you can only ever play the leftmost card. On your turn, you must place that card into the mountain. The mountain is built like a pyramid so each card you place must either form the base or be supported by 2 other cards. By building a single unbroken route from the bottom of the mountain to the top, you win, but this is easier said than done as trails start and end in different places on each card. You can discard cards from your hand instead of playing them. This will allow you to activate their ability, but sometimes those abilities can hurt you, so you really have to be careful when and where you choose to play a card. 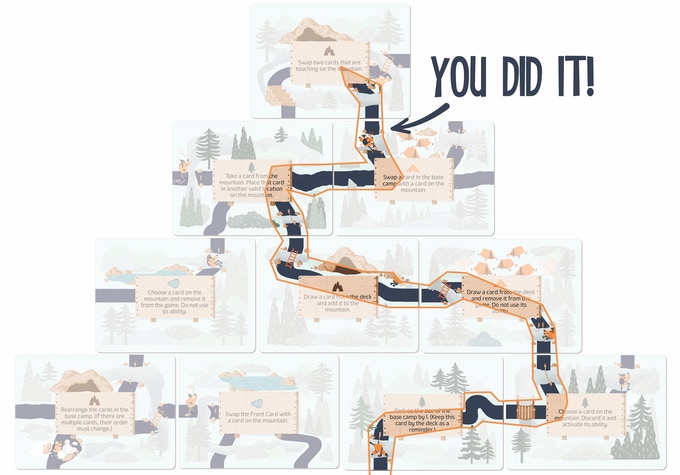 Being composed of only 17 cards, Unsurmountable is a perfect travel game and I like how there is a narrow window of choice you need to make, but a lot of strategy going into that choice. You can ascend the mountain yourself by visiting Unsurmountable on Kickstarter here.

Do you like dogs, because Dog Park is chock full of them! This set-collection/point-to-point movement game puts players in the shoes of dog-walkers. You’ll need to recruit dogs and take them on walks to collect resources, gain reputation, and hang out with other dog-walkers. Resources are used to play a dog’s walking cost. You can take as long as you want to walk a route, but whoever leaves the park last at the end of the round loses reputation for being late. After four rounds you score reputation points for your completed Objective cards, dogs with scoring abilities, Breed Expert awards, and leftover resources and the player with the most reputation wins. 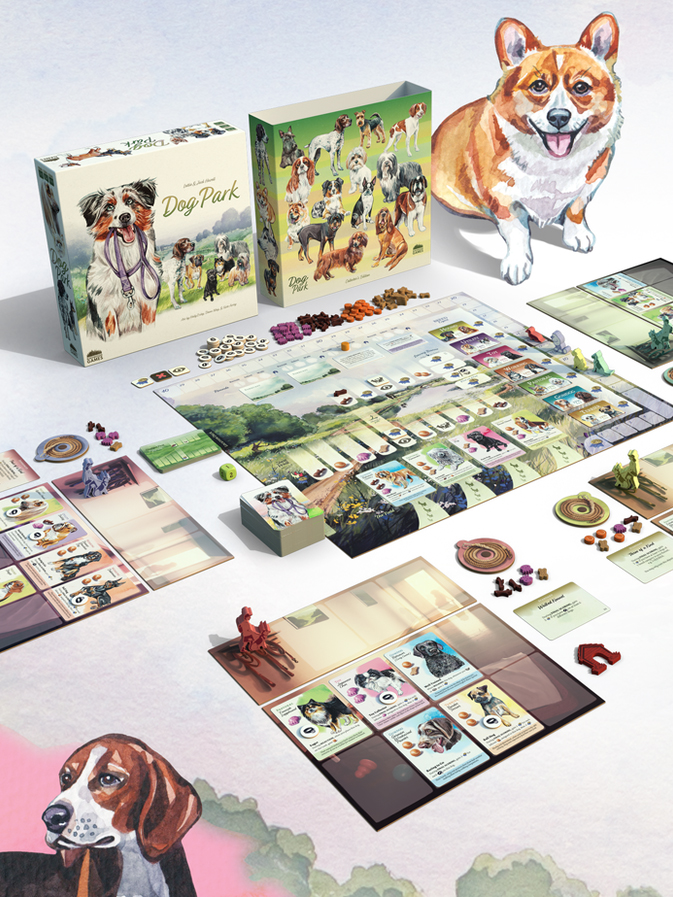 The theme, art, and gameplay all speak to a pastoral and chill experience. I like that there is a slight racing element to it as you don’t want to be the last player to leave the park, but if everyone is taking their time, you don’t have to rush. You can take a leisurely stroll through the Dog Park Kickstarter here to learn more.

One Deck Galaxy is a 1-2 player cooperative adventure based on the gameplay of One Deck Dungeon. In the game you’ll be trying to build a galactic federation while fighting off alien Adversaries. You start the game with a combination of a Homeworld, Society Type, and Adversary and on each turn you’ll be rolling dice and assigning them to take actions. Dice can be used to  gain influence at locations, build ships, and do scientific research. Your goal is to complete a federation card by fulfilling its’ objectives and then confront your adversary before they can overwhelm you. Want to play with more than 1 or 2 players? Good news! You can combine 2 sets of the game for a 4 player experience! 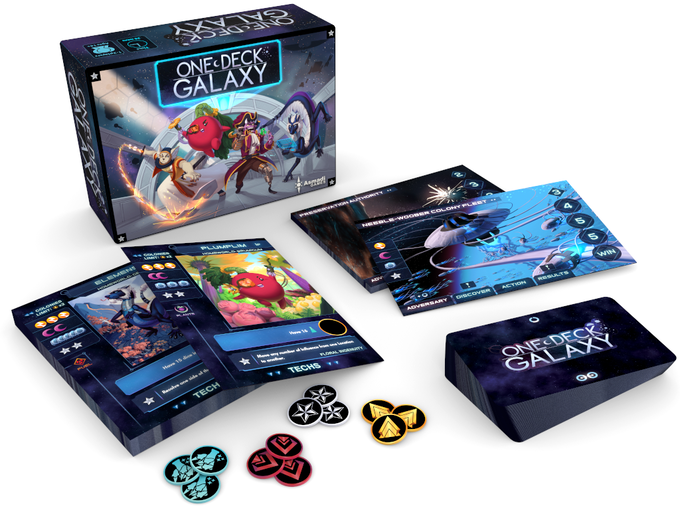 One Deck Galaxy looks like it will be just as challenging as One Deck Dungeon, but will pack in even more strategy as you try to decide where each die will go.  If you are a fan of the One Deck series or enjoy civilization-building games then make sure to check out One Deck Galaxy on Kickstarter here.

As a mad scientist, sharing a laboratory with other scientists can mean having the space you need to create astounding potions, monsters, and devices, but it also means having to keep an eye on your rivals. If you want to be the most renowned scientist ever you’ll need to send your minions out to collect resources and dice, use them to build amazing inventions, and build up your engine to earn renown. Your engine is a grid that you’ll be adding invention cards to. Card adjacencies will trigger effects and abilities and gain you renown points.  Once any player builds their 12th card, the last round of the game is triggered and, once it is complete, whoever earned the most renown wins.

I like that, throughout the game, the shared laboratory board will be upgraded which benefits all players. So you’ll have new opportunities as the game progresses. I also love tableau building games where the cards you place build on each other and can have a cascade effect. You can experiment more with Colab here on Kickstarter.