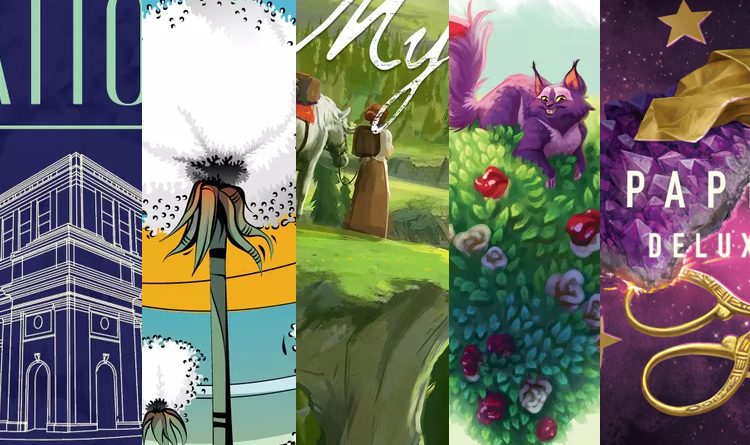 Jess
This week of Kickstarters may have broken me…

Union Station is a cube rails game, which means it is an abstract game where you use the placing of cubes on a board to represent track-building. The game is more about the stock market than the track building though. Each turn you’ll take one of 3 actions: Buy Stock, Lay Track, or Sell Stock. When you buy a stock it will increase that particular railroad’s value based on the position of the stock in the market. When building tracks, you can add discs for a Railroad that you own at least one Share in. Any time you decide to sell you must sell all Shares you own of that Railroad. You will receive money equal to the Share’s value this will also lower the Share’s value by one. Once all the Shares have been bought or sold, 20 dividends have been paid or no additional tracks can be laid, the game ends and the player with the most money wins. 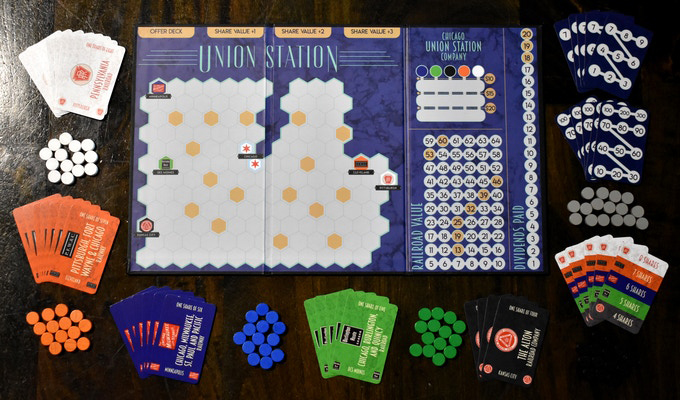 Union station is really all about finding the best moments to buy and sell. I like that the rules are very streamlined so you can really focus on your strategy, Learn more about Union Station here on Kickstarter.

Dandelions and Psychic Pizza Deliverers Go to the Ghost Town

With this Kickstarter, Board Game Tables is bringing two awesome Japanese board games to a wider audience. Dandelions is a unique roll-and-move/area-majority game where each player will roll their own set of 11 dice and then use those results to take actions over 11 turns. On your turn you will choose a die and then move your pawn around the rondel according to that die’s value. Then you will add the die you used to the space you land on. If you land on another players paw you’ll move again and if you land on a space with another player’s die of the same value, you’ll move their die to an adjacent space. Once all dice have been placed, the game ends and players earn points for the spaces they have the majority on. Whoever has the most, wins! 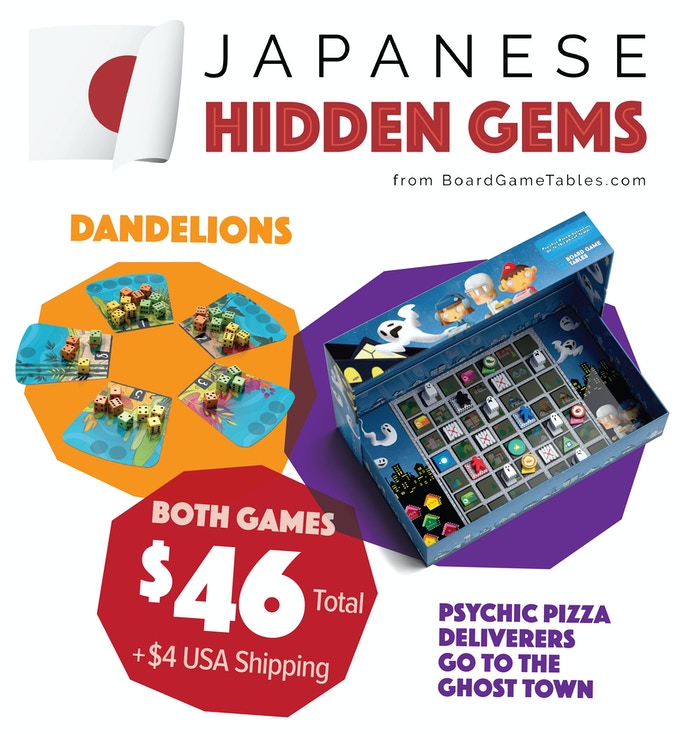 Psychic Pizza Deliverers Go to the Ghost Town, is just what it says it is. You’ll be delivering pizzas to ghosts across a unique town map in a deduction-style game. One player will take on the role of Mayor, while everyone else are the pizza deliverers. On your turn a deliverer can move 1 space, try to attack a ghost, or use a psychic power. Then the Mayor will resolve the results of that action.  The neat thing here is that the players cannot see the map so they have to watch how things play out on other players turns and see what clues the Mayor gives them. The first player to find the correct house to deliver pizza to wins!

Both games sound really fun and unique. Dandelions is visually stunning and the whole “box as a component” aspect of Psychic Pizza Deliverers Go to the Ghost Town is really genius. Take a look at both games here on Kickstarter.

In Mythwind players will cooperate to build a settlement in a fantasy world. The game is persistent between sessions so it can feel like a roleplaying experience while still having the structure of a board game. Each player will take on a unique role that has its own style of gameplay and over multiple session will grow in power. The main focus of the game is growing the town, but it also has some adventure baked in with exploring the surrounding area and a story line that builds based on your choices. 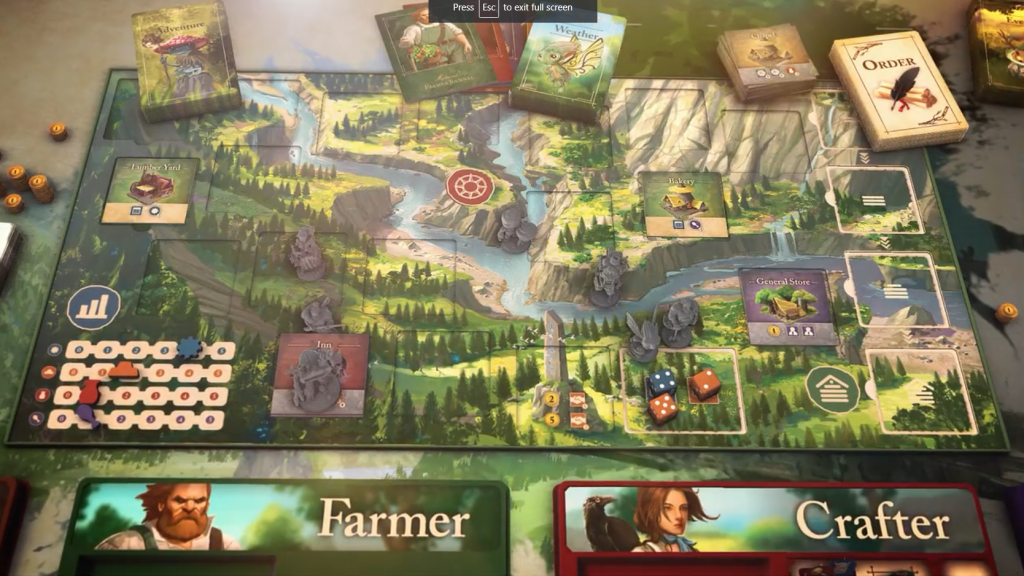 I love the theme, the gameplay, and the fact that games can be as long or as short as you like. I’m big into roleplaying and sometimes it’s tough to find the time to play out a full session of a game, so Mythwind sounds like a really nice option to get that experience. You can discover more about Mythwind here on Kickstarter.

In Paint the Roses, you and your fellow players have been tasked by the Queen of Hearts to paint her garden. Everyone must work together to figure out what the Queen’s secret desires are and decorate the garden accordingly. Each player will have a secret Whim card that they cannot discuss with the rest of the team. Every turn you will place a tile in the garden and if you match the pattern to your Whim card you can place clue tokens that will help the other players figure out what your Whim card might be. Then if your teams is feeling confident, they can guess what icons are on any players Whim card. If you guess correctly you’ll move the gardener’s figure a number of spaces equal to the value of the Whim card and the queen will advance once at her current speed, but if you guess wrong then the queen will advance at double speed. If you manage to fill the garden without the queen catching you, then you win the game. 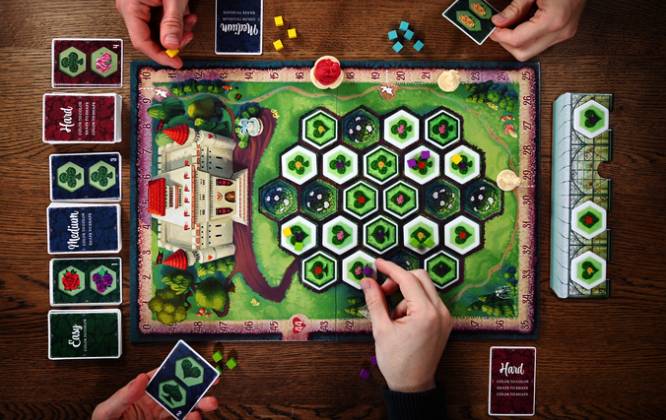 What I like about Paint the Roses is the game adjusts its difficulty automatically. The higher you score, the faster the queen will move, so as you get better at the game subsequent plays will become more challenging. You can back Paint the Roses by visiting Wonderland… I mean Kickstarter here.

And the pièce de résistance to top all Kickstarters this year…

What do you get with the Deluxe edition of such a classic game: A rock, some paper, and a pair of scissors, but like really nice ones. You also get a specially designed solo mode so you can play Rock Paper Scissors by yourself. 🤔 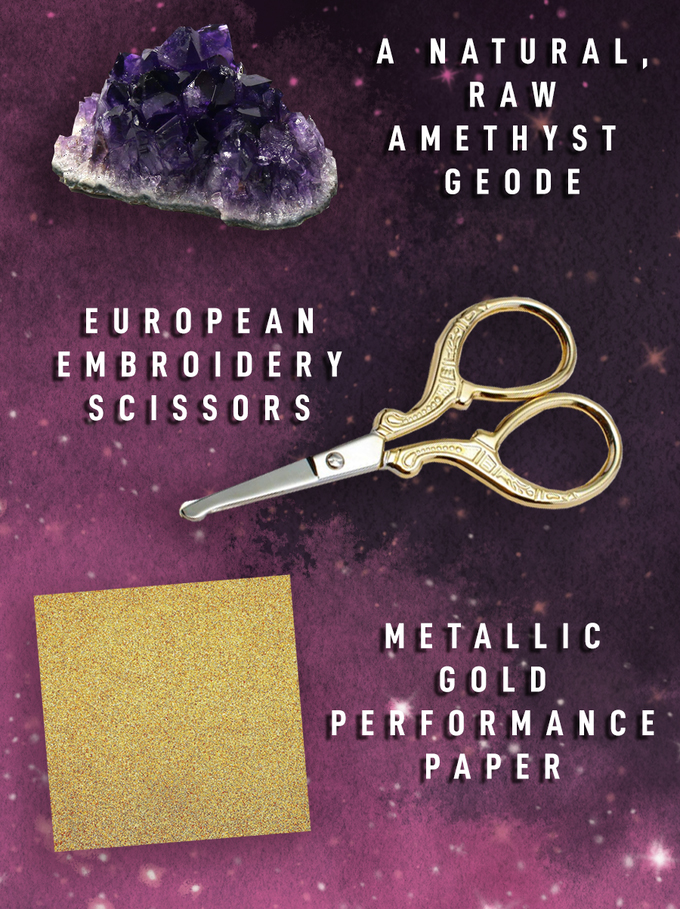