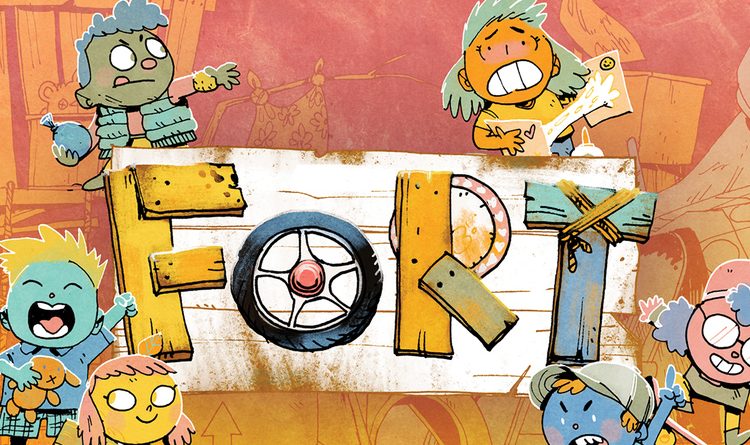 Fort delivers a few clever twists on its simple deckbuilding gameplay, while its charming visuals and playful theme are truly easy to enjoy.

Jess
When I was a kid, I desperately wanted a treehouse or a hidden lair or perhaps just a fort. Something to call my own where I could have adventures and be me without those pesky adults getting in the way. Fort harkens back to those halcyon days of being a kid; hanging out with your friends, eating pizza, and playing with toys. In the game, your mission is to grow your friend circle, expand your Fort, and gain points from doing fun kid stuff! 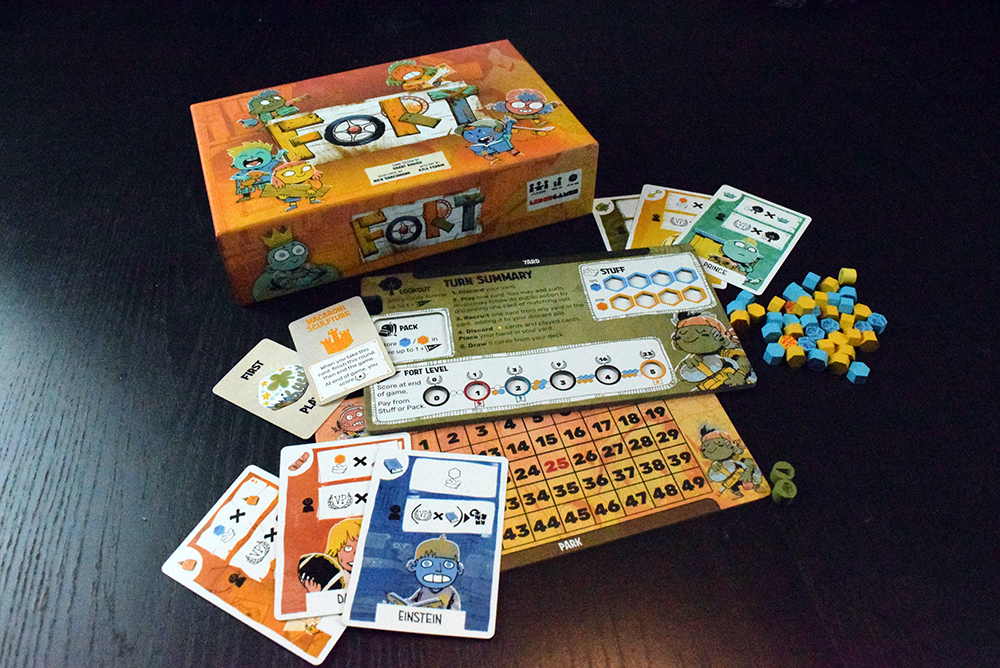 Fort, which is designed by Grant Rodiek is mechanically a deckbuilding game, which is to say that you’ll draft cards into your own personal deck as the game goes on, and you’ll use these cards, which represent your group of friends, to take various actions which can happen during your AND other player’s turns.

We received a copy of Fort for our consideration and possible review.  We weren’t otherwise compensated.

Andrew
Right off the bat, I want to say that I *love* games where you can participate in other players’ turns! It creates constant engagement that keeps Fort feeling snappy.  But more on that in a minute. 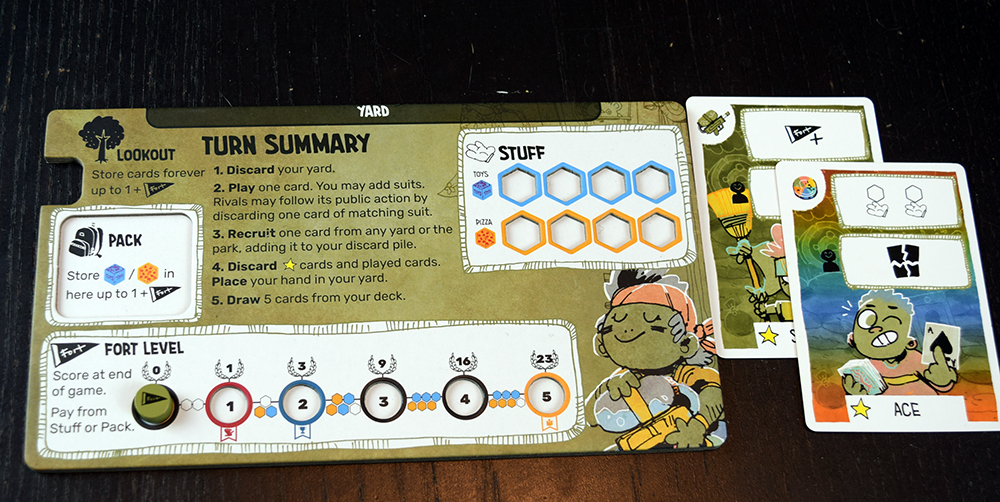 The flow of Fort works like this.  On your turn, you’ll play a card from your hand.  These cards come in different suits and have different actions that they let you take when you play them.  These actions generally either let you grow and manage your supply of toys and pizza (the critical building blocks of any serious playtime), or let you spend those resources on building up your Fort.  Other actions include scoring points and assigning cards to your Lookout, which is a sort of permanent bonus to future actions. 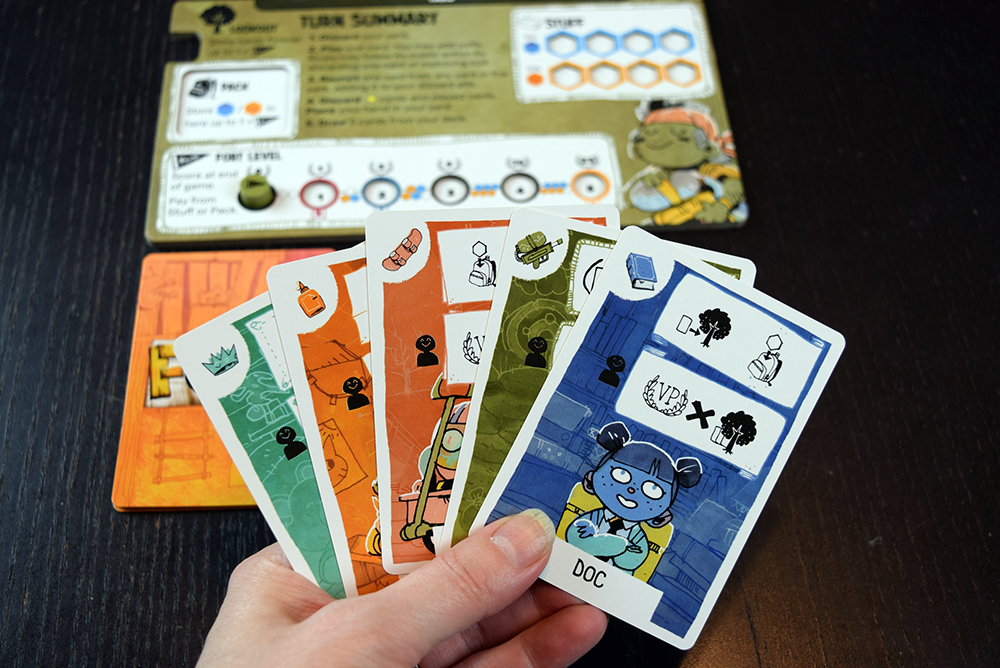 Most cards have two action spaces – one ‘Public’ action, and one ‘Private’ action.  The Private action is simple enough to resolve – you do what the card indicates.  The Public action is one of the things that keeps Fort engaging – anyone at the table can play a kid who matches the suit of your card in order to take that action, too.  So every time you play, you need to keep in mind what opportunities you’re giving the other players.  Of course, they’ll need to do the same, and it’s rare for a round to go by without you getting the chance to take multiple bonus actions on other players’ turns. 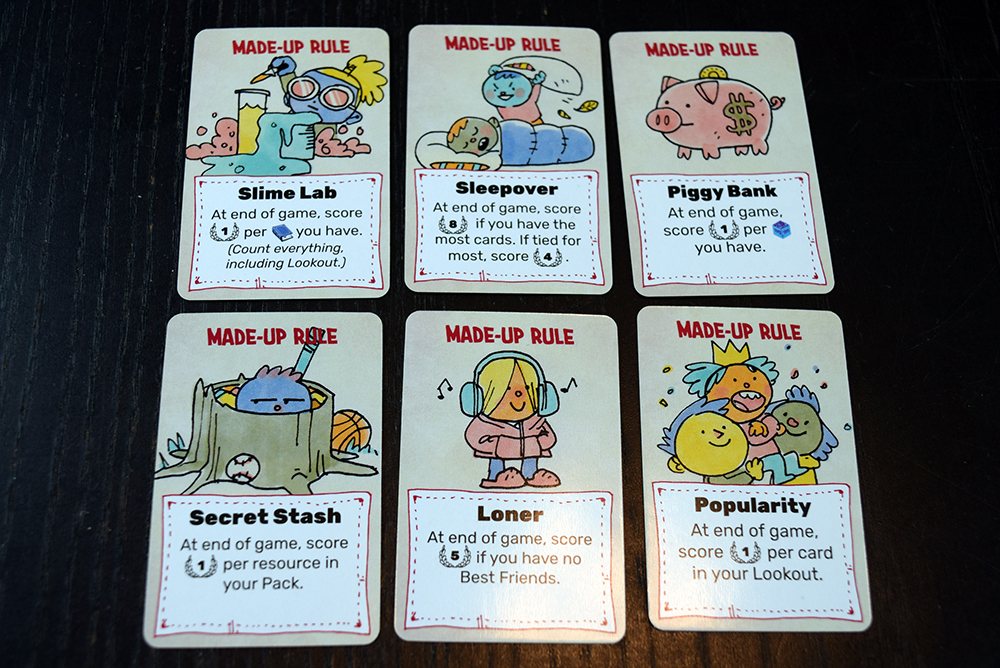 And like we said, that’s one of the best parts of Fort – you care about what other players are playing every single turn.  It also means you’ll want to carefully manage your hand of cards.  See, unlike most other deck building games, any cards you don’t use on your turn don’t go directly into your discard pile.  Instead, these kids hang out face up in front of your play area, where they can be drafted by other players during their turns.  And that makes sense – after all, you invited those kids over but didn’t play with them.  Who’s to say they won’t go hang out with someone else instead?  The good news is that any kids who don’t get drafted away DO go into your discard pile at the beginning of your next turn, ready to come hang out in a future hand.  And your best friends will never leave you. 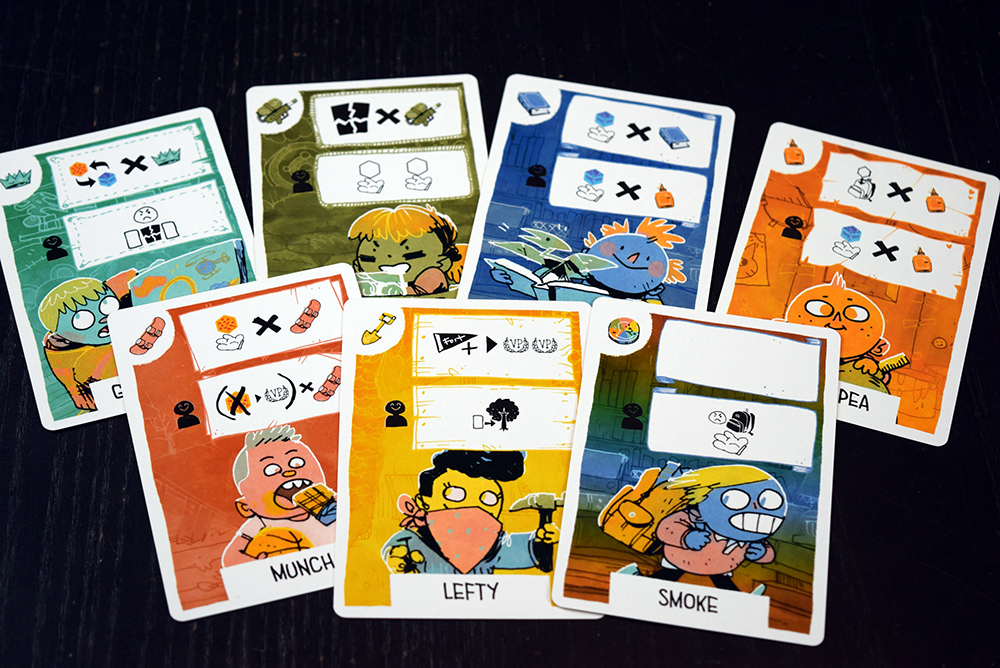 Gameplay in Fort tends to be quick – turns are snappy, actions are straightforward, and combos flow naturally from the way some of the kids work, multiplying their effect by discarding additional cards.  The only place things slow down is on each turn when a player drafts a kid into their deck – you’ll have to evaluate not just the kids in the Park (the public draw space), but also any face-up kids hanging out in front of your opponents. But that aside, Fort flows well, and you’ll have piles of toys, pizza, and friends in no time. 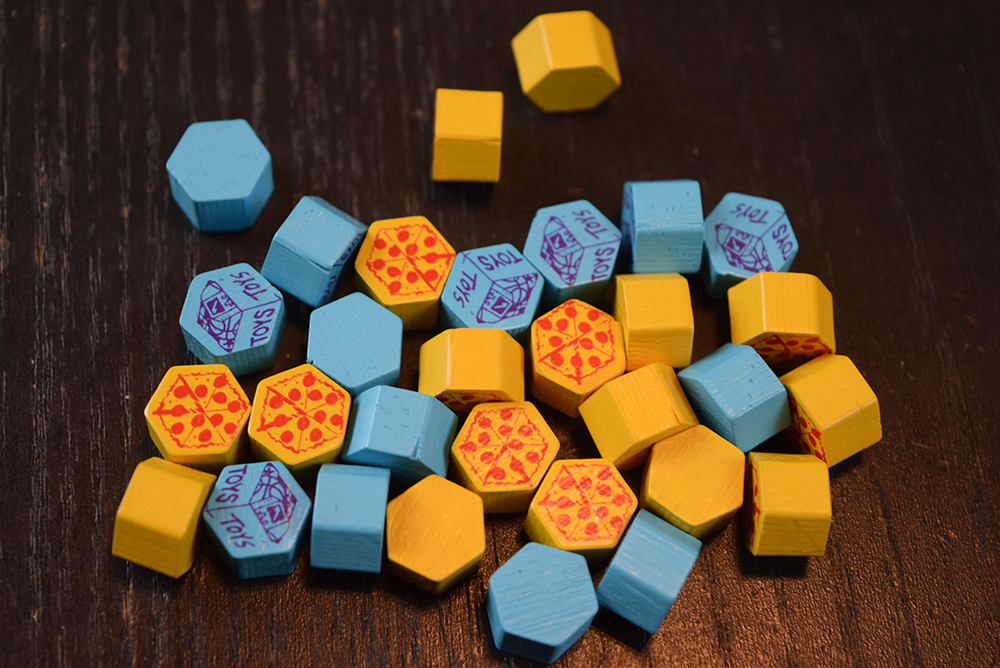 Jess
I really like Fort! The art’s great, of course, but the gameplay is really what I enjoy most here – getting the chance to take bonus actions based on what everyone plays is a fun way to keep the game flowing, and I just love it when a good combo goes off and you get that pile of pizza and toys you need to upgrade your fort for major points!

Andrew
I agree! My only real criticism of the game is that I did find one or two of the concepts to be a little cumbersome without really adding much interest – like how you’ve got a limited inventory space, but you also have this backpack area that you can sometimes add stuff to but need to manage separately. It felt like that system was just sorta tacked on, without adding any interesting decisions. 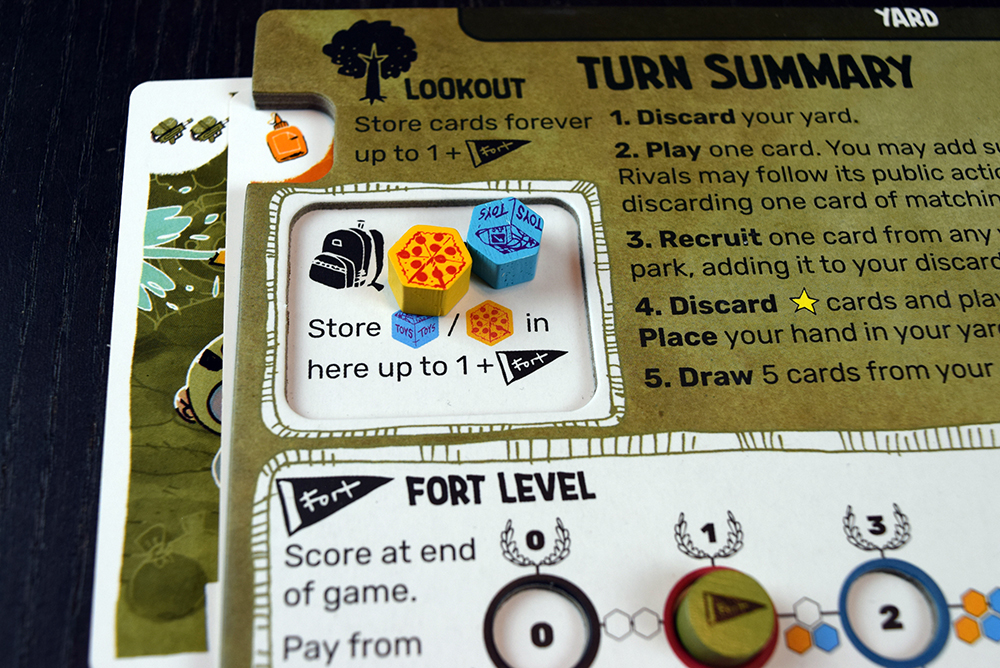 Jess
Yup, I hear you. On the other hand, I really liked having to choose whether to play a card that had strong actions, knowing you might be giving everyone else the chance to make big moves, or if you tried to play a little more conservatively, limiting yourself by playing cards with weaker (or no!) public action, and accepting that you weren’t going to be getting as much done.

Andrew
Totally. And like you said, the theme and art are fantastic, and I really enjoy how Fort sits on the table.  But don’t let the aesthetics fool you – this (relatively) small box game has some real decision-making at its core. 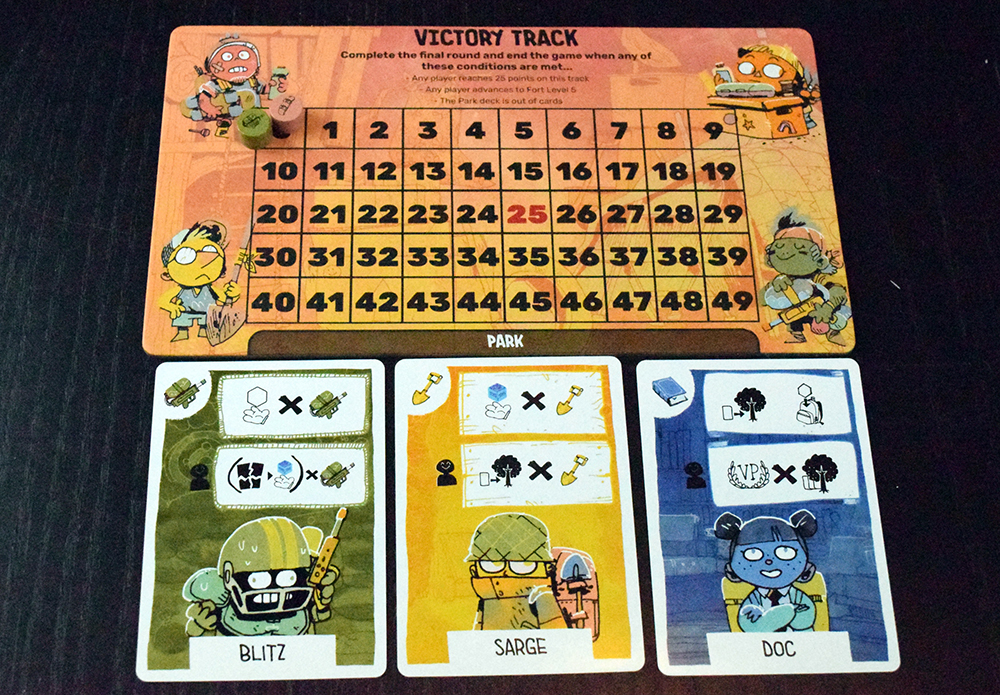 In addition to keeping players interested when they’re not the active player, the way following public actions works, that you’ve got to discard a kid of a matching suit from your hand, adds another clever layer to the hand management puzzle of the game.  By using kids for off-turn actions, you’re also protecting them by having them in your discard pile rather than going unused in your hand, where they’d end up in your yard to potentially get poached by other players.  On the other hand, you want to have the card(s) you want to play when it does get to your turn, so a canny Fort player will always be planning ahead. 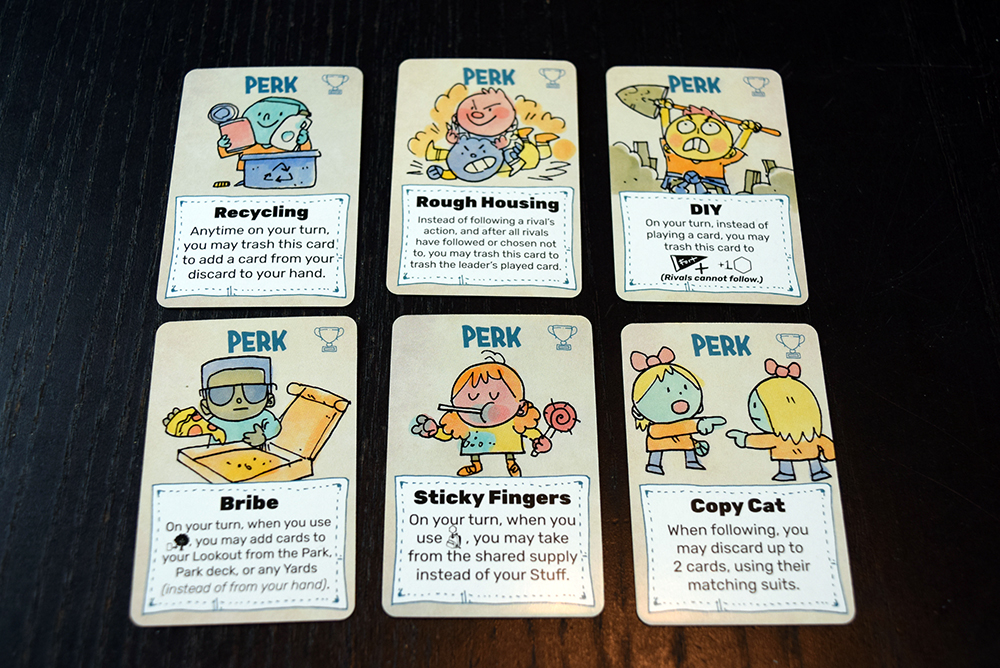 Fort is a reimplementation of one of designer Grant Rodiek’s other games, SPQF, but we’re not familiar with that one, so we aren’t in a position to make any comparisons.  But it sounds like the Made Up Rules (end-game scoring goals) and Perks (unique player powers) are elements that got added in the design of Fort, and they add a bit of variety that will change your tactics from game to game.

On the whole, we had a really good time with Fort – it’s not a complicated game, but there’s definitely the need for strategy in this bright, colorful box full of high-quality components (seriously; dual-layer boards, nice wooden tokens for pizza and toys, and Kyle Ferrin’s fantastic art make for a wonderful presentation).  Fort also scales really well, as with more players the risk of powerful public actions increases, as does the potential reward of grabbing kids from other players’ yards.  On the other hand, the more players you have, the more turns’-worth of calculus everyone will need to make, which can slow things down just a bit.

But the bottom line is that Fort works well regardless of how many kids you invited over to play – just make sure you don’t run out of pizza!