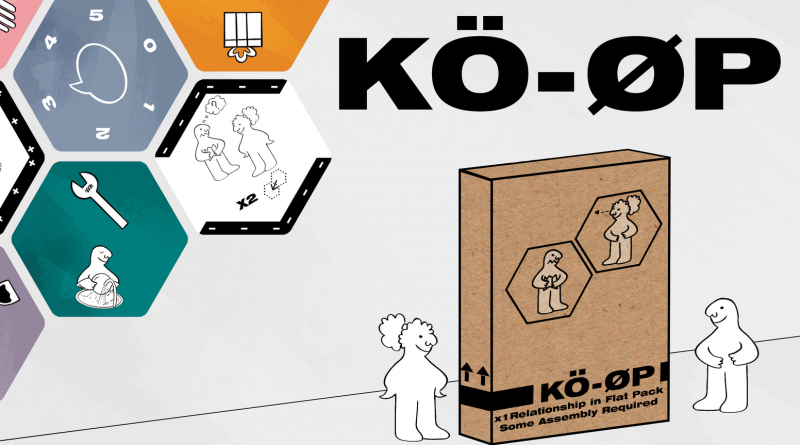 KÖ-ØP manages to (flat) pack its small box with tile-laying, emotion-exploring, relationship-ending cooperative gameplay that all, somehow, comes down to meatballs.

“We think your meatball icons look like golf balls in ice cream cones, there something needlessly fussy about the setup, and we’ve nearly gotten into three arguments during the first round alone. So, it’s perfect so far.” 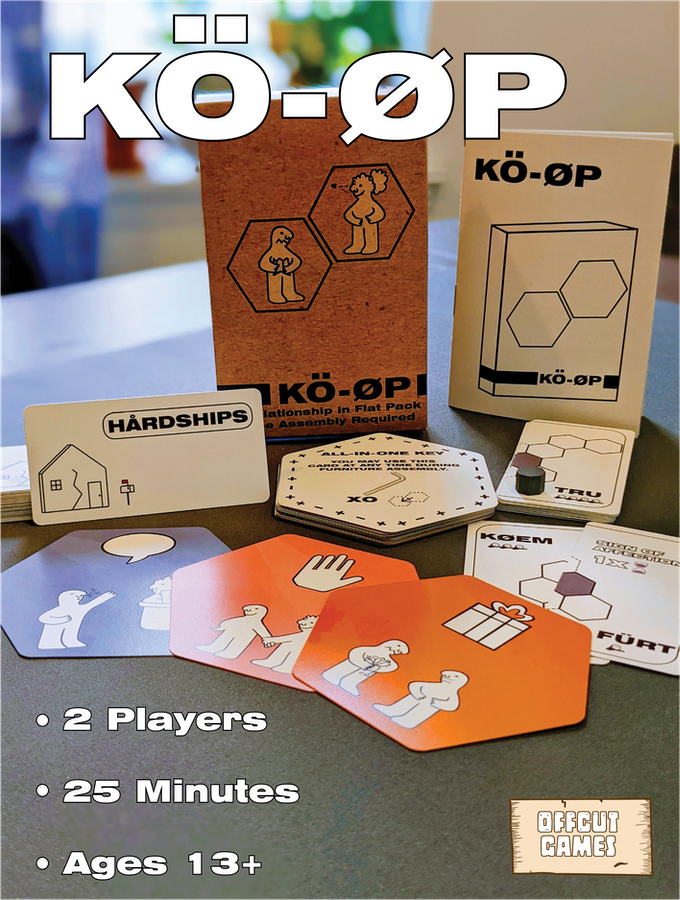 We were sent a prototype for our consideration and possible preview, with the option to request a final/retail copy.  Images in this article are either of that prototype or from the Kickstarter campaign.  We weren’t otherwise compensated.

That’s an actual text I sent KÖ-ØP designer Pat Brennan 15 minutes into our first swing at the prototype he sent us of his new 2-player game, up now (and very successfully funded) on Kickstarter.  And while I might have been just a touch hyperbolic in the service of my particular brand of somewhat acidic humor, the fact is that KÖ-ØP both met and defied the expectations set up by his initial pitch which, to paraphrase, went something like ‘KÖ-ØP is a 2 player, cooperative, tile-placement game with limited information sharing.’  All that’s true.  What he didn’t tell me up front is that KÖ-ØP is about assembling flat-pack furniture, the kind most Americans probably populate their starter domiciles with almost exclusively and which undoubtedly sustain many a boardgamer’s ever-growing storage needs.

But what KÖ-ØP’s really about is the success or failure of your relationship with your partner, a thing that any couple who’s ever stumbled through trying to assemble a MÖRBYLÅNGA will intrinsically understand is the true test of the aftermath of any ‘successful’ trip to IKEA (or your flat-pack furniture store of choice).

Which is to say, it’s brilliant.

Jess
Ok, I have to stop you there. One, a MÖRBYLÅNGA isn’t even a complicated build so I don’t know what you’re complaining about there, and two, I’ve personally put together every KALLAX, BILLY, and HEMNES we’ve ever owned, so I’m not sure what you mean when you talk about ‘couples’ working on these things together.

Andrew
Only because when I do try to help, you get frustrated with me because I want to do things in the order that makes the most sense!

Jess
THE INSTRUCTIONS *ARE* THE ORDER THAT MAKES THE MOST SENSE!

Ok, let’s try framing this again.  In KÖ-ØP, your goal is to work together with your partner to successfully assemble up to 3 pieces of flat-pack furniture, as diagrammed out by the randomly-assembled instruction cards each round.  Over the course of several turns, you and your partner will each add cards to the central assembly area, respecting both the placement rules around card edges, as well as trying to adhere to the overall shape of the construction in order to successfully build that piece of furniture.  Simple enough, right?

Of course not.  Communication is hard, and, well, sometimes it can feel like you and the person you’re with just aren’t on the same page.  So while both players have a hand of cards that represents the pile of components that might be successfully assembled into some semblance of a FÜLFSENTÜV or whatever, you can’t just come out and tell someone what you’re holding.  That sort of vulnerability is earned by learning and speaking your partner’s love languages. 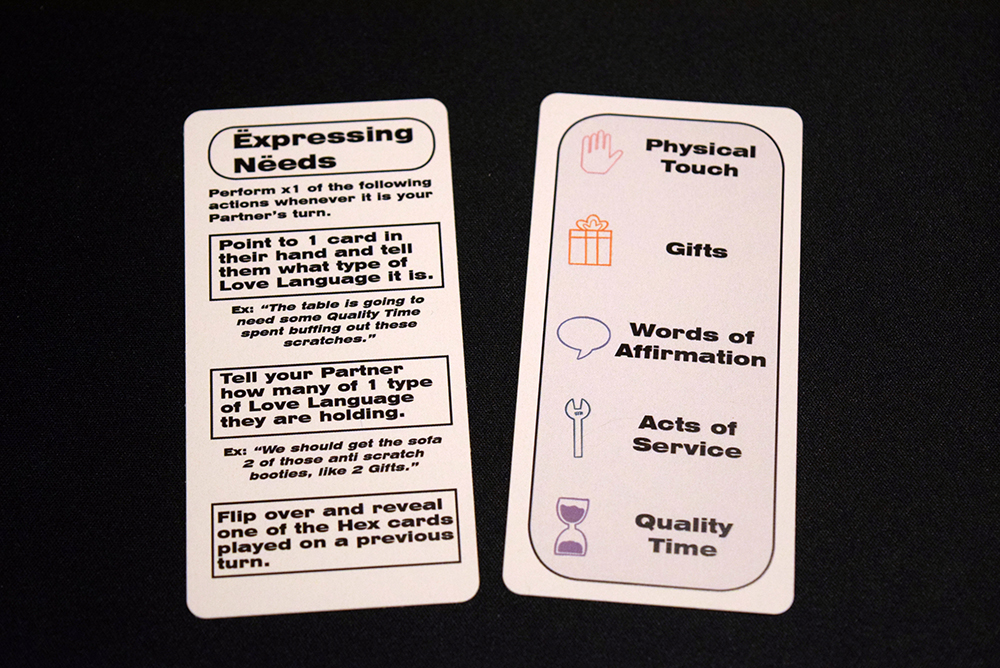 Which is why KÖ-ØP is actually all about learning both how to ask for and how to give your partner what they need in terms of physical touch, gifts, words of affirmation, acts of service, and quality time, because if your partnership is possibly going to survive, then you need to start thinking in terms of each other’s needs.  At the beginning of the game, each player secretly gets a set of emotional needs which they’re trying to meet by the end of the game. 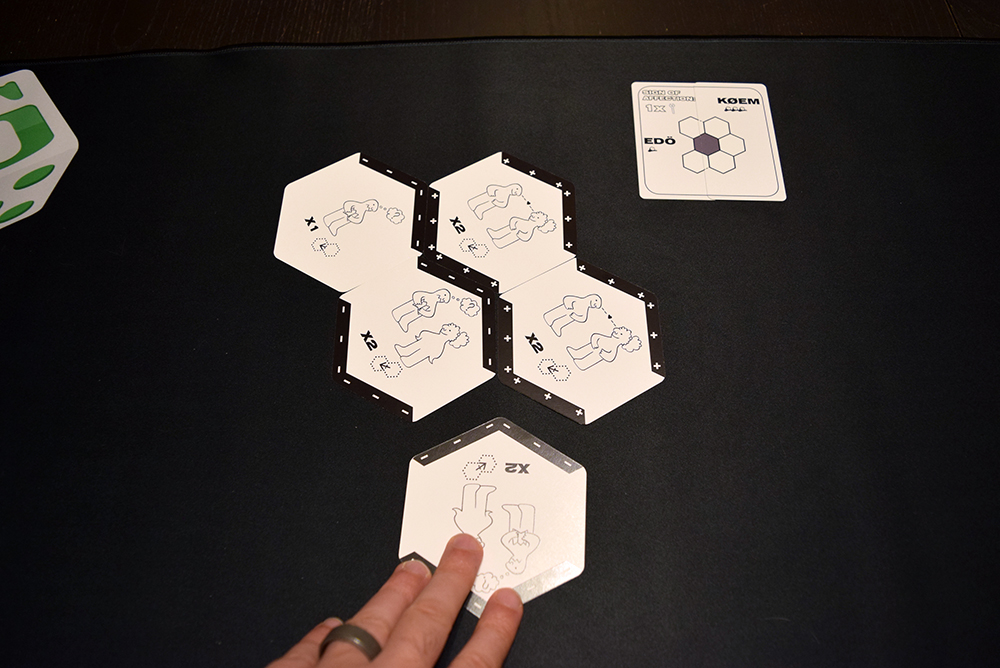 These needs are also represented by the cards used to assemble your furniture and are scored by successfully constructing whatever MATÖORKØEM you’re trying to put together that round.  So you want to play cards that will help you and your partner meet those emotional need goals.  Also making life complicated are Hardship cards, which will change the rules and goals for the game each time you play.  But all that shouldn’t be a big deal – your relationship can weather some hardship, right?  Right?  We’ll, we’ll just have to see, because here’s where KÖ-ØP throws an allen wrench into its otherwise-straightforward tile-placement challenge.

When you pick up your pile of cards, you get to see the side that tells you how they can be fit into the overall structure of the furniture, but only your partner gets to see the side that tells you which love language using a given card will increase.  So while you might know that you want, say, 3 acts of service by the end of the game, you won’t know which of your cards, if any, will increase that love language value.  So it’s up to your partner to communicate which components they think should go into the furniture based on love language.  But here comes the next roadblock – communication in KÖ-ØP is extremely limited, and each turn, a player can only say a single piece of information about the cards in their partner’s hand, either revealing what a specific card’s love language is, or telling them how many cards of a given love language their partner is holding.  THAT’S IT.

But remember, they don’t know your set of emotional needs, only their own, and they have no idea if a card you’re holding can fit into the overall structure of the furniture, since they can only see the side with needs and not the side with the placement rules for that card.  So it’s entirely possible for your partner to point to a card and say ‘hey, this is an Act of Service’, which probably indicates that they need acts of service and want you to play that card, but they have no idea if it’s even possible to play that card at all, and when you don’t play it, it’s suddenly YOUR FAULT somehow. 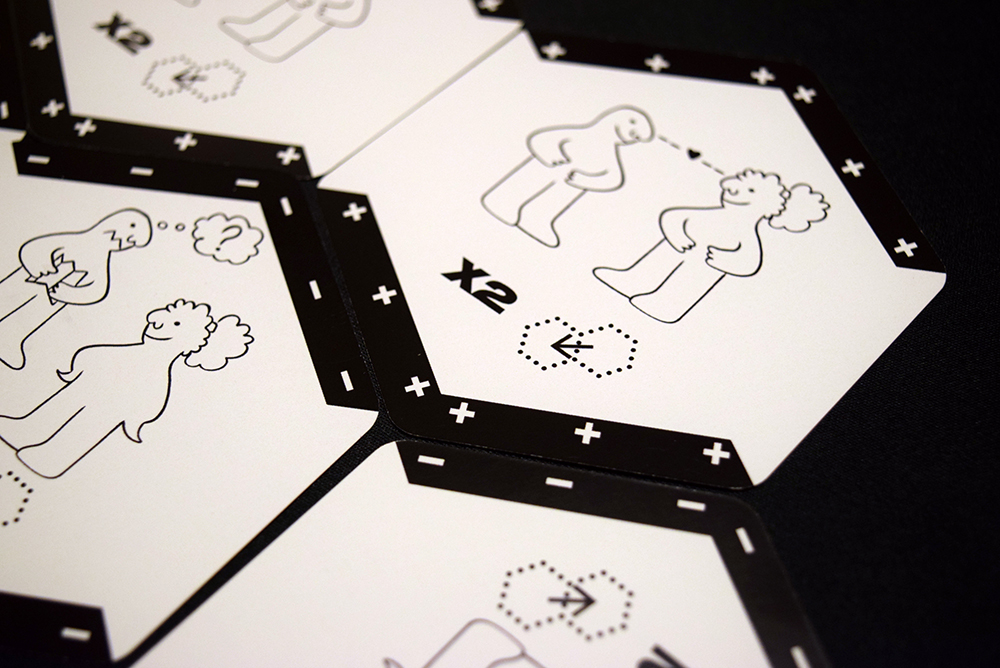 Jess
What do you mean, my fault? You told me something, and I heard you, but it’s not just about words of affirmation, ok? This SENTÜASVEE isn’t going to build itself if we talk nice to it and the SUN’S GOING DOWN, ALRIGHT?

Jess
I swear I’m gonna shove this STEE so far up your ÜST you’ll taste it. 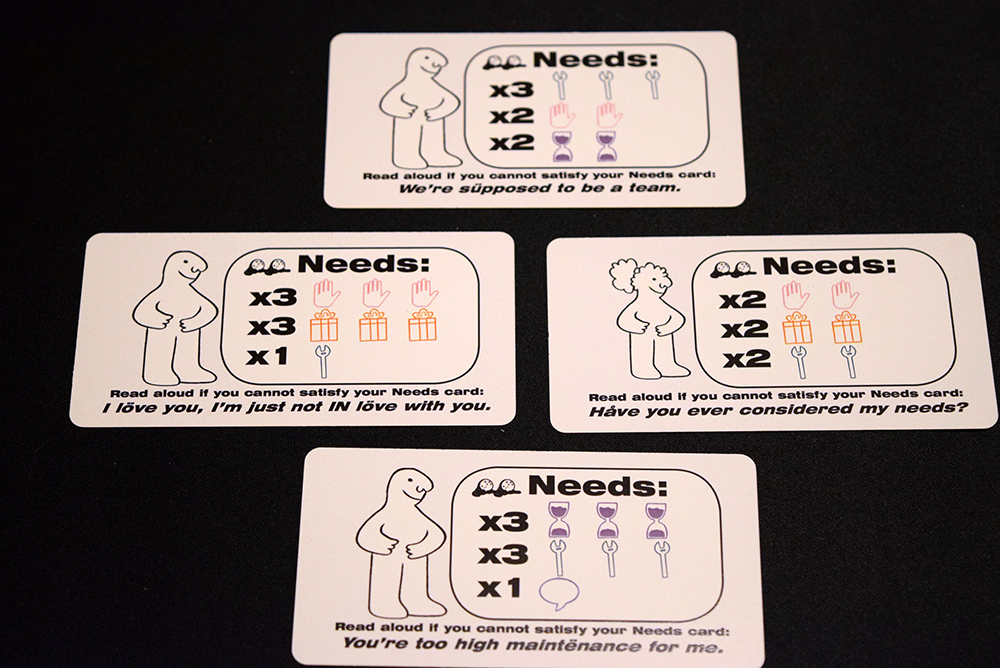 IF (and that’s a big if) you manage to make it through 4 turns of hand management, staccato communication, and card playing, having successfully put pieces in the shape dictated by your instructions, you will flip all those cards over and increase the values of whatever love languages are there.  Additionally, each instruction card is potentially worth some meatballs, which will add to your final score.  I mentioned the meatballs, right?  It turns out KÖ-ØP is actually about meatballs.

Of course, if you don’t manage to exactly build your new furniture, it’s too unstable to keep and you score nothing for the round, aside from an increase in blood pressure and likely some glaring at each other.  Either way, you and your partner will sweep the board clean and set up for another build, and after 3 rounds, you and your partner will reveal secret need cards to determine which, if any, were met, deal with personal baggage, and determine on a scale of 0-30 meatballs if this relationship is worth saving.

Andrew
Pat Brennan is a personal friend of mine, so I’d be remiss in not mentioning that fact, though if you’ve engaged any of my previous reviews of offcut games’ other offerings, you’ll know that, friendship aside, when I like a game I’m not shy about saying so, and the complete opposite is entirely true.  And given some of what I’ve written, you might also wonder why he’s still my friend, but that’s something only he can answer. 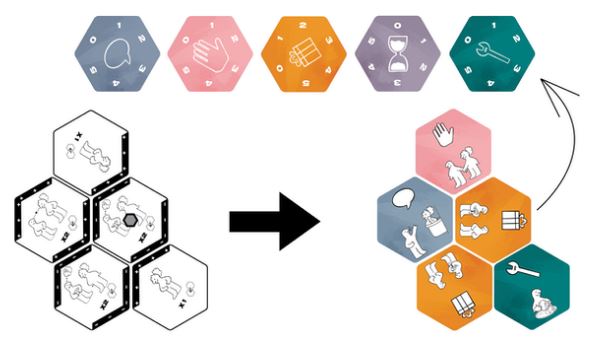 But all that is to say that we actually really enjoyed KÖ-ØP.  All the hyperbole aside, the puzzle it presents is excellent – you’ve got very limited actions and very limited communication, and that creates the atmosphere that makes the game work well.  Your partner is telling you that a given card or suit may be important, but you don’t or can’t necessarily meet that need.  And then you’ve got to make a choice about the information you communicate – do you feed them info about their hand that will help you meet your needs, or do you use the info you extrapolated from what they told you to try and guide them towards playing cards that will meet their own?  And above all, can you manage to work together to actually put the dang thing together and score those points, or is the whole thing doomed to fall apart? 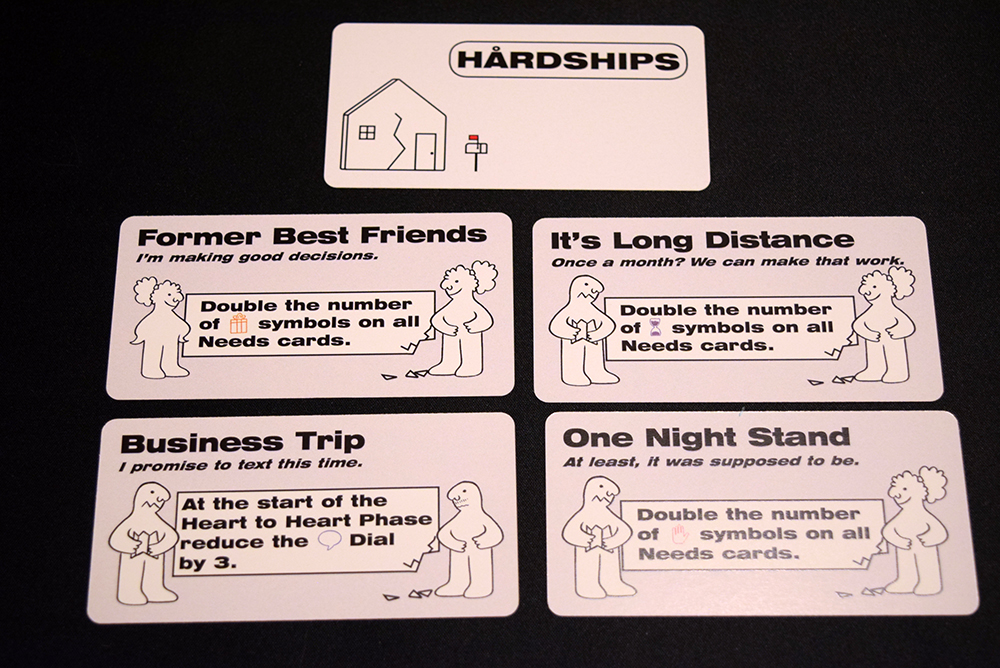 Jess
For me, I think the theme comes through really well, from Alisha Wilkerson’s perfect art to the fact that I really did have to keep reminding myself that it’s sorta supposed to be faux-frustrating because, let me tell you, there were some moments…

And that’s actually both KÖ-ØP’s biggest hit and biggest miss with us.  That puzzle we just mentioned, of limited actions and limited resources, does effectively create a tension that adds to the simple decision-making of an active player’s turn, and when it goes right it feels exhaustingly glorious.  But since cards are shuffled and dealt randomly, it is entirely possible for you to have nothing useful to do on one of your precious few turns, and when you fail to make progress, and likely tank an entire round because of that, just because you randomly don’t have any cards that can be added to the tableau feels unfair, and in those moments, you just have to take comfort in the fact that your failure isn’t your fault, though that doesn’t always soothe the burn.  There are some minor mitigations to this, such as the bags of random parts that act as universal connectors, but by leaning on those measures you’re signing up for personal baggage that will complicate your endgame scoring, making them a bitter pill to swallow sometimes. 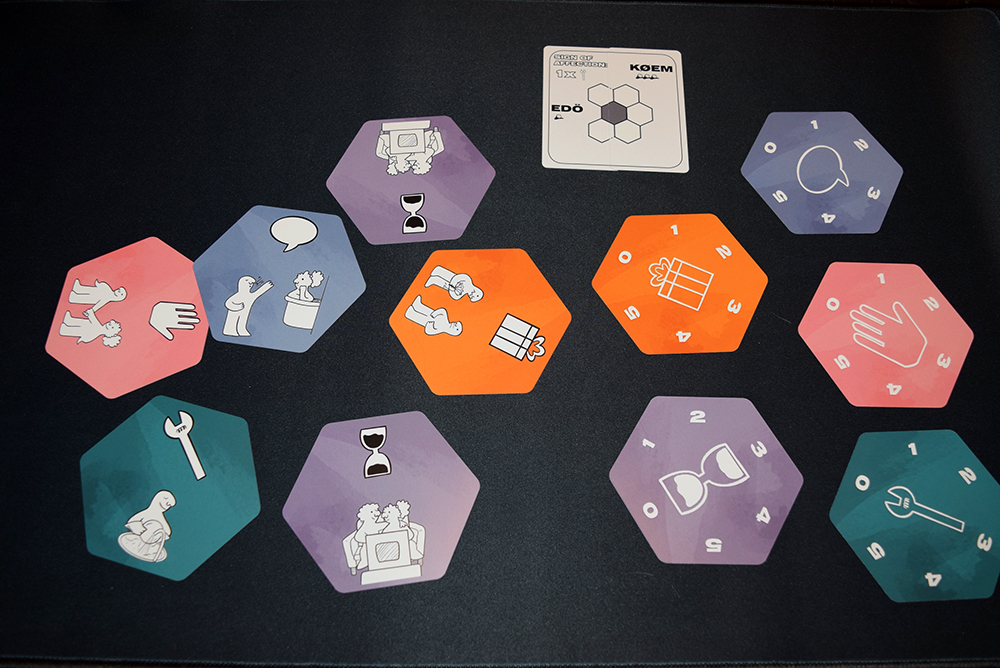 But with that context, we definitely recommend checking out KÖ-ØP.  It’s up on Kickstarter right now, fully funded, and already seeing some stretch goals getting hit.  Its particular brand of tension and decision-making makes for a quick, occasionally-infuriating experience that will be perfect for the right gamer pair.  And it’s definitely cheaper than that HEMNES I keep getting nagged to put together.

Jess
In NO UNIVERSE do I expect YOU to build it!  You couldn’t tell a BUSUNGE from a VALLENTUNA to save your UPPSPEL.

Andrew
See what I mean?  The game’s brilliant.