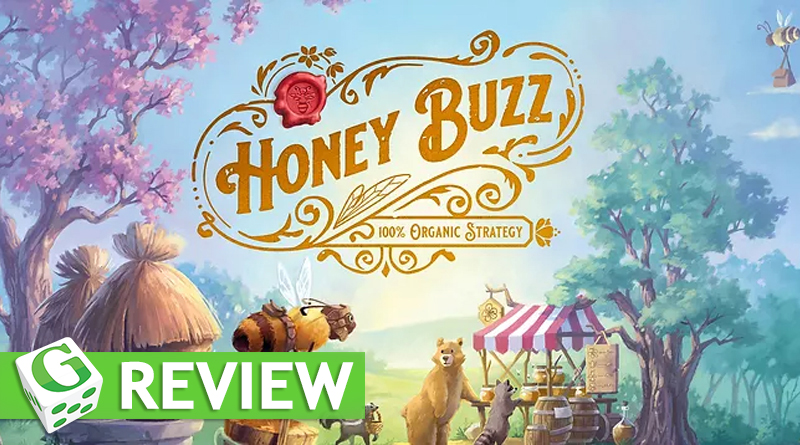 Honey Buzz is a surprisingly strategic and occasionally contentious game despite its pastoral theme.  Its interconnected mechanisms create an engaging puzzle, but also potentially a bit more downtime than you might want.

Honey Buzz starts with a simple premise – that bees have discovered economics – and builds around that a tile and worker placement game that’s all about building up your hive, gathering nectar, and producing honey, all to be the bee who manages to make the most gold on the Bear Market.  So gather up your worker bees, pile up that pollen, and sell your honey for as much coin as you can, because the queen is only going to recognize her most successful apiary accountant as we play Honey Buzz! 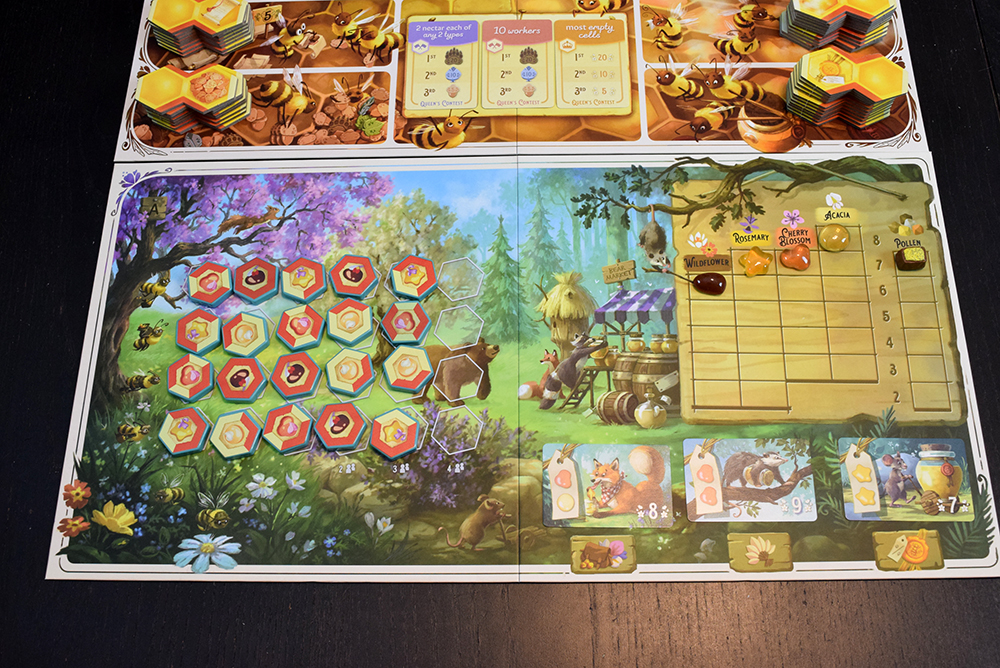 Andrew
So I see we’re starting early with the puns. Bear market. That one actually made me groan.  And then I realized that our worker pieces are called ‘beeples’ and I –

Jess
Listen here, you. I love bees so much and this game is so pretty and well produced, you’d better not ruin this for me over some puns.

Andrew
Hey, hey, I was about to say I loved the Beeples! But the implied threat has been duly noted…

At the heart of the apiary economy is your hive.  You’ll build yours up by sending workers – I MEAN BEEPLES –

…by sending your Beeples to the board to pick up tiles.  In order to place your workers on a space to pick up tiles, you’ll need to put a stack of Beeples that is exactly one higher than the previous placement at that location, no matter who’s Beeples they are.  That means it’s not only possible to be blocked out by an opponent’s workers, it’s entirely possible that you might not be able to take the tile you want because too many of your own pieces are already in that space.  But if you ever run out of Beeples, you’ll spend your turn recalling them to your hand, to be deployed again.

Andrew
I think one of my favorite parts of Honey Buzz is the worker placement itself. The whole needing to place one more worker means that you’ve got to be strategic with when and how you grab tiles, and I love the puzzle there. My only problem with it is their insistence on calling it ‘making a bee line’.

Each tile has a different action associated with it, such as gaining gold, gathering nectar & pollen, selling on the market, and even producing additional Beeples (which is critical for making those tall stacks towards the end of the game).  The tiles you gather will be placed into your hive and once you’ve created an empty cell, all the actions touching that cell will activate.

Jess
I thought this semi ‘action programming’ part of the game was really neat. As you’re adding tiles into your hive, you’re planning what actions you’ll want to take once a cell is complete, and that planning aspect is really clever.

Andrew
Totally agreed! Especially once you take into account that the structure of the cell also determines what sort of nectar it will gather, and therefor honey it will eventually produce.

Out in the woodlands, players’ forage tokens will move around from flower to flower, gathering nectar and pollen.  Pollen is a side currency that can be sold on the market.  Nectar can only be added to your hive if you have an open cell that is structured properly to hold it.  For example, wild honey can be held in a cell constructed from 3 tiles, like so: 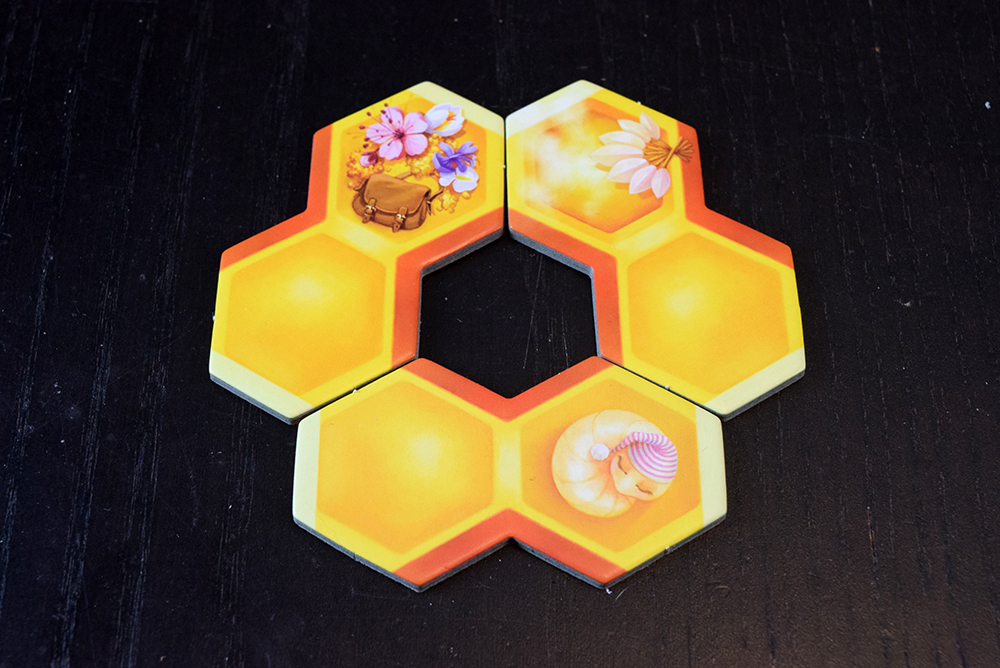 Whereas acacia honey can only be held in a cell meticulously formed from 5 tiles in this arrangement:

What that means is that the hive building in Honey Buzz is both an action selection/programming and also a spatial puzzle, as you will be trying to make space for valuable nectar before your opponents snatch them all up, while still managing to take the actions you need to take in order to keep your hive buzzing.

Eventually, your hive management efforts will bear fruit (or honey, really), and you’ll find yourself with honey to sell.  By taking the market action, you can either complete orders for woodland critters, or simply sell your honey on the open market.  You’ll want to math out your sales, though, because while the open market initially offers you more coin for your honey, over the course of the game each type of honey and pollen gets devalued as the market gets saturated.

Andrew
Because the bees discovered economics but also immediately decided capitalism was the way to go, so they think nothing of decimating the market to maximize their own profits.

Jess
That surprised me, actually. I would’ve assumed bees would trend towards communism.

As the market crashes and orders dry up (signaling the end of the game), it’s every hive for itself to turn the biggest profit possible, and once it’s over each player will add up the gold they’ve earned from sales, points from completed orders, any bonus gold from challenge cards, and finally a few spare coins for unsold pollen and honey.  The hive with the biggest pile of coins is the winner!

Jess
The pacing in Honey Buzz tends to happen in bursts. You’ll often spend several turns just adding tiles to your hive and not doing much, but then there are turns where a cell gets completed and you end up with a big waterfall of actions that chain together. Those big turns are really satisfying, but they do tend to grind the game to a halt for everyone else.

Honey Buzz is an interesting game that initially feels at odds with itself.  The theme is pastoral and gorgeous, a visual feast that is both relaxing and pleasant.  But the gameplay is thinky and pushes players towards optimization and careful consideration that makes for a somewhat better experience at lower player counts – more players means more blocking, more getting nectar snatched out from under you, more foiled plans, and much, much more downtime as players calculate and recalculate how best to use their Beeples, place their tiles, and sell their limited resources.

Jess
Honestly, I think Honey Buzz works great at 2, oookayyy at 3, and loses me completely at 4. Even the two of us, who aren’t usually overthinkers, took way longer turns than usual for the back half of the game.

Andrew
For sure. Which is ironic, since I don’t really think Honey Buzz is a heavy game, but it definitely sits at medium weight and can play a bit slowly even for that.  Between the pacing issue you mentioned and the need to plan ahead, it can get a bit sticky.

Jess
What it definitely isn’t is a cute little game about adorable bees making delicious honey. I mean, it is, except for, you know, the cutthroat capitalism.

And that really does sum up our experience with Honey Buzz.  It’s a gorgeous game – the production value is through the roof and the artwork and color palette makes it sit brilliantly on the table.  We got the deluxe version so some of our components were upgraded, though to be honest, aside from the acrylic nectar tiles none of the upgrades really felt like they particularly improved the experience of engaging the game (the upgraded nectar tiles sit higher than the surrounding hive, creating more visual distinction and making it slightly easier to see your nectar in the hex grid of your hive).  The base game still features plastic blobs for honey, wooden Beeples, thematic & distinct coin denominations, and plenty of lovely, colorful art.

But for as pretty and adorable as Honey Buzz is, it’s also a thinky, sometimes toothy game.  Is your opponent massing Rosemary honey to make a big sale?  Sell yours first, even if it’s not ideal, so that it undercuts her profits.  That nectar you’ve been angling towards in the field, that you spent 5 tiles building a cell to hold?  Better hope no one else realizes what you want and decides to take it before you get there.  And towards the end of the game, when no one needs to make new bees or forage in the field, the competition over the tiles relating to honey production and sales will get so tight that you’ll be stacking bees to the ceiling just to take the tiles you need to stay in the race.

Andrew
So we both love the theme and the presentation, but at the end of the day, do you recommend Honey Buzz? Did you like it?

Jess
I did enjoy it, and I do recommend it, but with those caveats. You need to know the sort of experience you’re signing up for, and you need to be cool with each player taking their time and thinking through their strategy. And also with getting your plans occasionally messed with. You?

Andrew
I feel the exact same way. The production is through the roof, but I’m not sure if the deluxe version is really worth it in this case, which is kinda rare for me (collector brain being what it is). But I’ll add an even stronger caveat to your caveats and say I think Honey Buzz is basically a 2-player game for me. But at that player count I do think it’s a fun series of interconnected mechanisms and I enjoyed engaging the puzzle of its gameplay.

So there you have it.  Honey Buzz does get Team Gameosity’s recommendation, as long as you’re into the experience you’ll get once its on the table.  There’s plenty to enjoy about the gameplay and the presentation is top notch, even if the deluxe edition failed to floor us.  It has a couple of expansions for those who really enjoy it, as well as an advanced gameplay variant that turns foraging into a memory game, as well as a solo mode (which we haven’t checked out).  So if you’re in the (bear) market for a game about capitalist bees with multiple gameplay mechanisms to consider, you should definitely check out Honey Buzz!