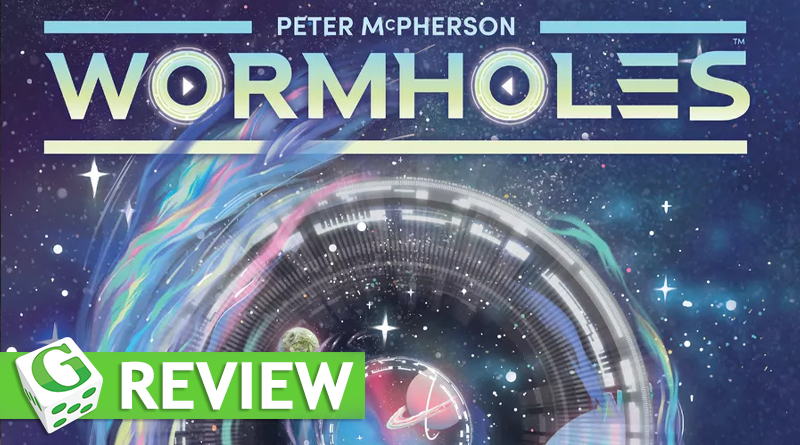 
Wormholes, published by Alderac Entertainment Group & designed by Peter McPherson (Tiny Towns) is a network-building game, where players will fly around the galaxy, picking up and dropping off passengers as they construct a network of the titular wormholes to help zip from one end of the map to the other. But does the game deliver the goods? Let’s find out as we review Wormholes! 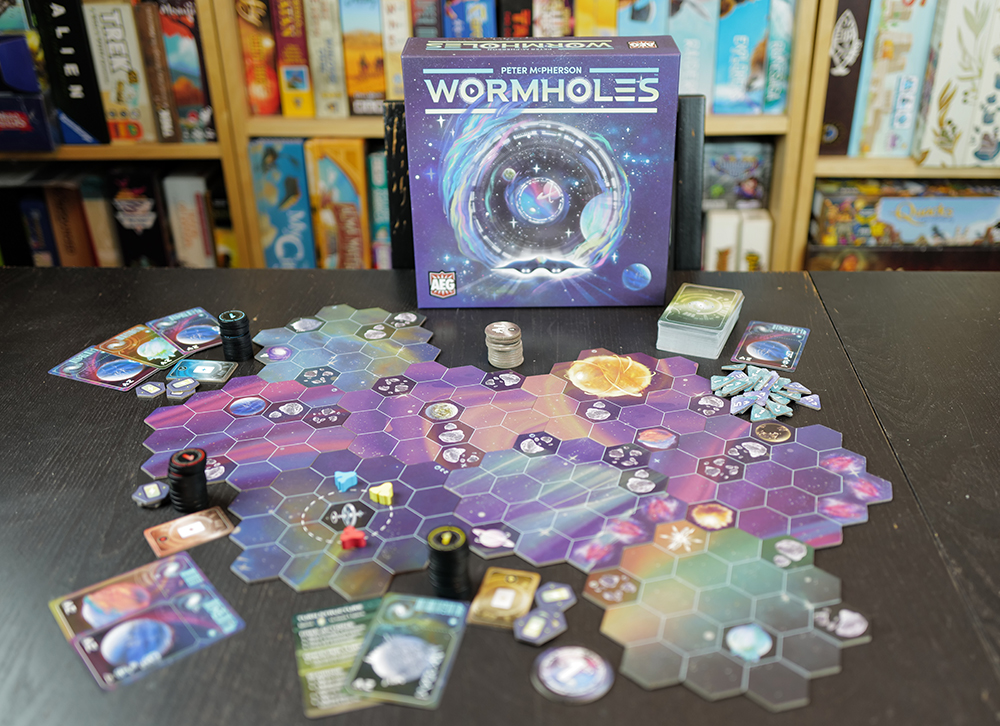 In Wormholes, you are a galactic explorer, working for your company to build up the wormhole network for glory and profit. Each turn, you’ll move around the hex-grid map, navigating your way around planets and through stellar bodies, all of which either aid or complicate your attempts to pick up passengers and deliver them to their desired destinations. 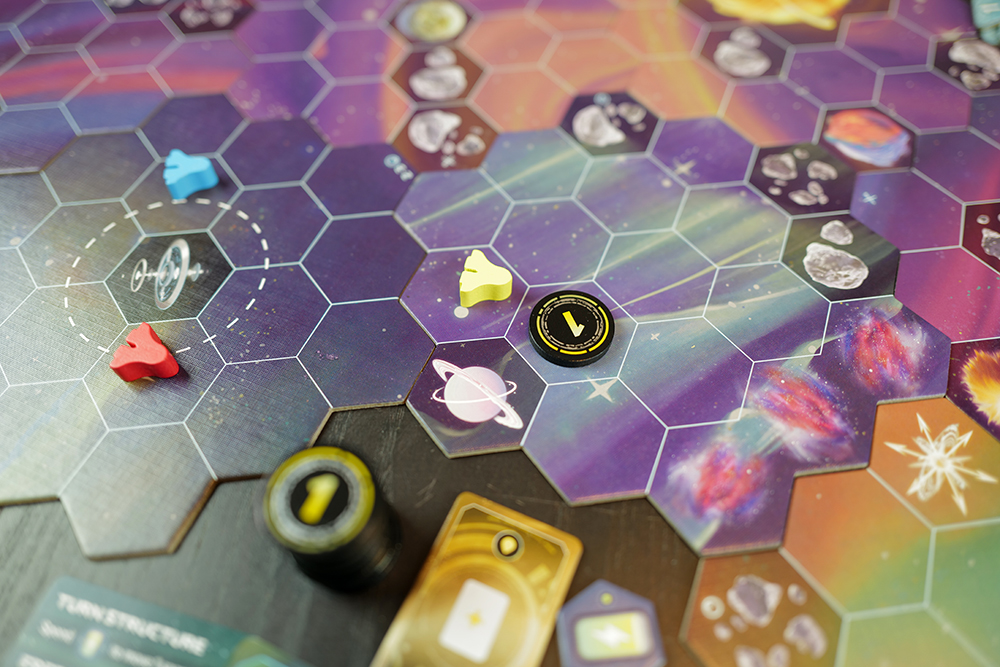 However, while your spaceship may be a technological marvel, it only has 3 energy tokens and can never gain more. Each token will let you putter a measly single space, and at that rate, it’ll take forever to gather passengers from one planet and deliver them to another. The solution? Wormholes, of course! 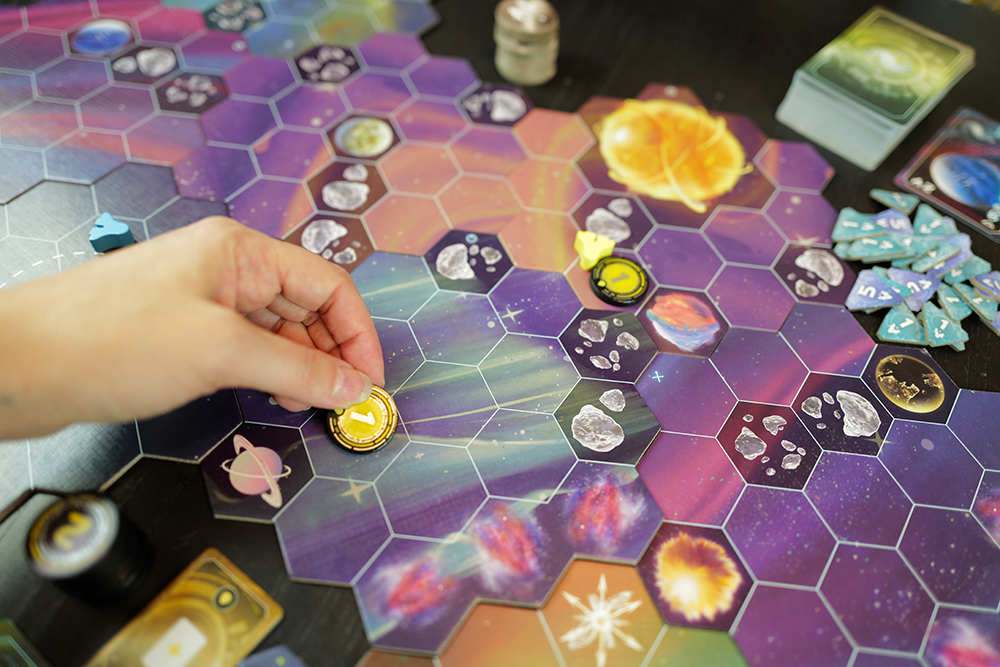 You can drop a wormhole gate in any empty space in orbit around a planet. Each gate is one of a pair, and as soon as you drop the second gate, you can move between paired gates for free. That means once you make a long trip across the galaxy, so long as you thought to drop a gate before you left, future traversals between those planets will be instantaneous!

Jess
Which is awesome, because it means as the game goes on, your trips across the board will be faster and faster, making it easier and more efficient to get your passengers where they’re going! 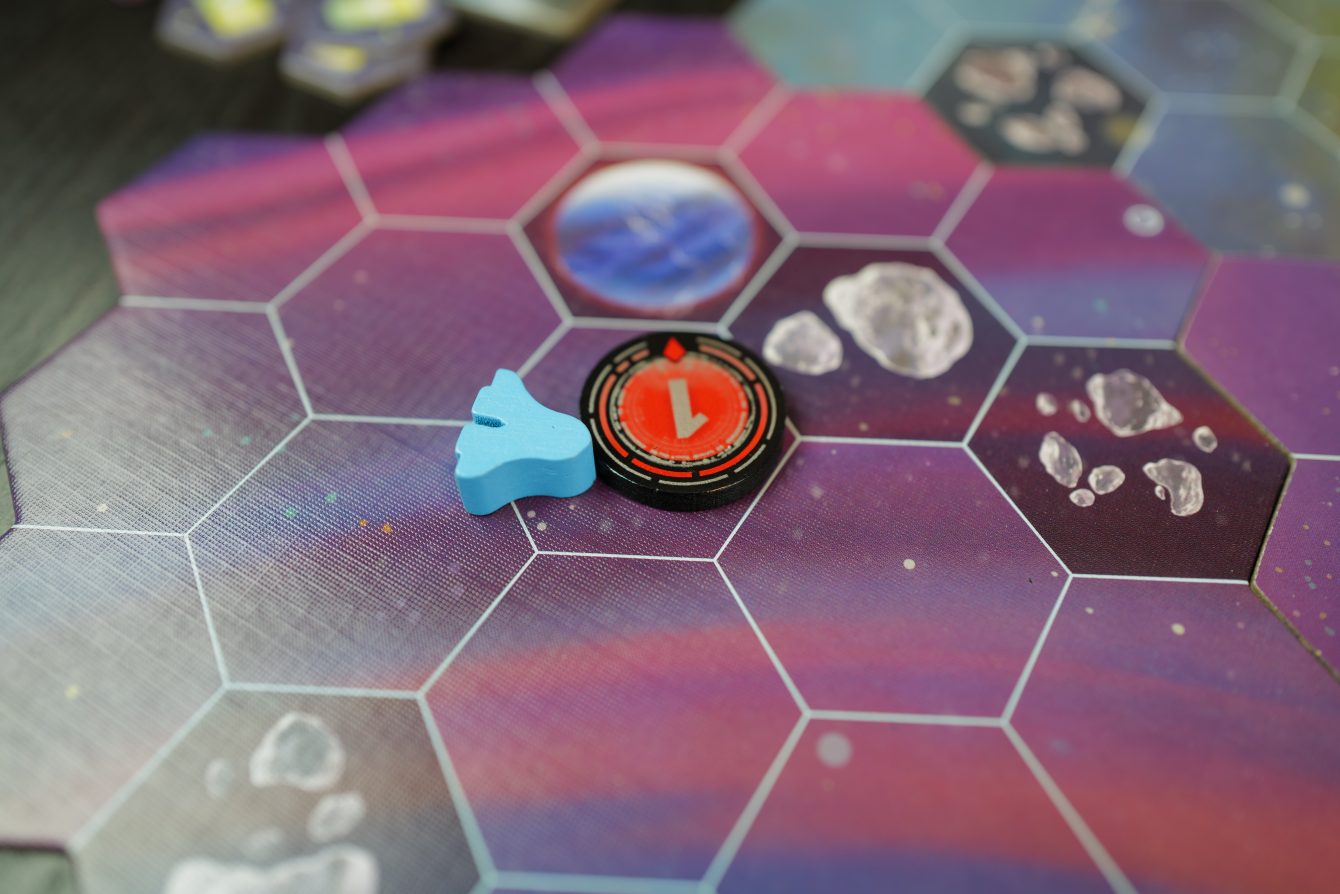 But that’s not all. For the modest price of having another player score a victory point, you can make use of their wormholes too. So over the course of the game, it isn’t just your own network of gates that lets you zip all over the place – it’s everyone’s!

Andrew
The cleverness in that design means that these shortcuts are always positive. Another player building a gate in orbit around a planet you’ve already connected to means expanded possibilities for them AND you, and the interaction of using someone else’s gates are always positive, rather than costing either party something.

Jess
I loved that! The player using another person’s wormhole isn’t losing a victory point, either. So the only ‘cost’ is just making sure that you’re scoring more points for yourself than you’re letting the other players gain from you using their network. 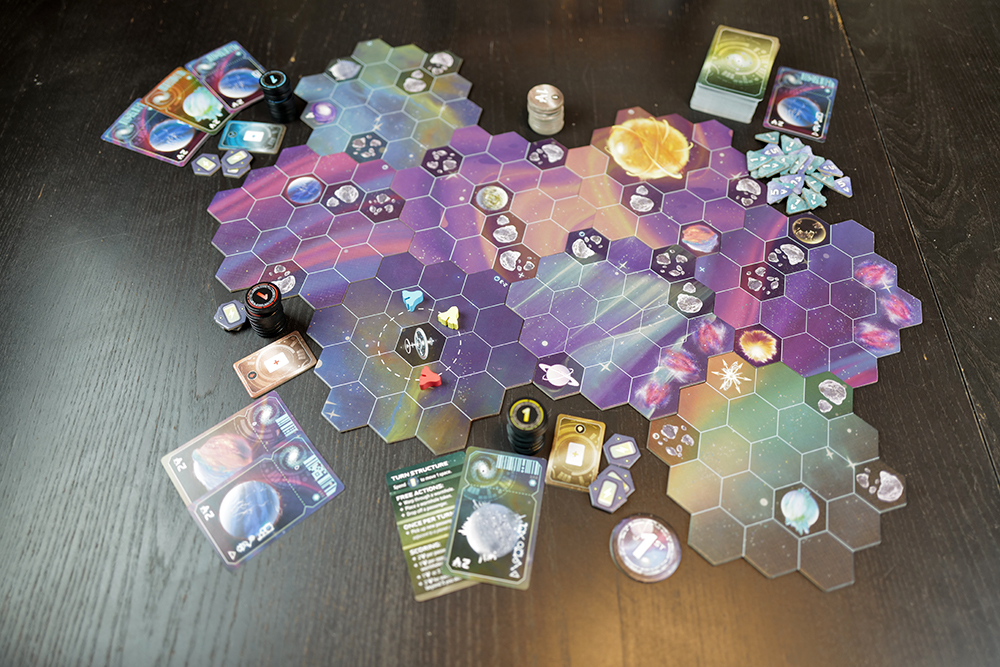 Wormholes’ map is composed of tiles that are arrayed based on the number of players. Each tile has an A and B side, and the first player token doubles as a handy coin for flipping randomly in case you want to do so when setting them up (which we totally recommend). In addition to the planets where you’ll grab passengers (and a spaceport where passengers go when you unceremoniously dump them for being too inconvenient to transport), there are a handful of terrain…space-ain?…features that will make your travel more interesting:

Andrew
I love that virtually everything on the map is somehow a good thing.  Even the black hole, symbol of universal destruction, is really just wormhole roulette here.  Heck, even moving around giant planets is easy since it only costs 1 energy to move from any space in orbit to any other space in orbit.  For a game of limited movement, Wormholes sure does give you lots of little ways to optimize that. 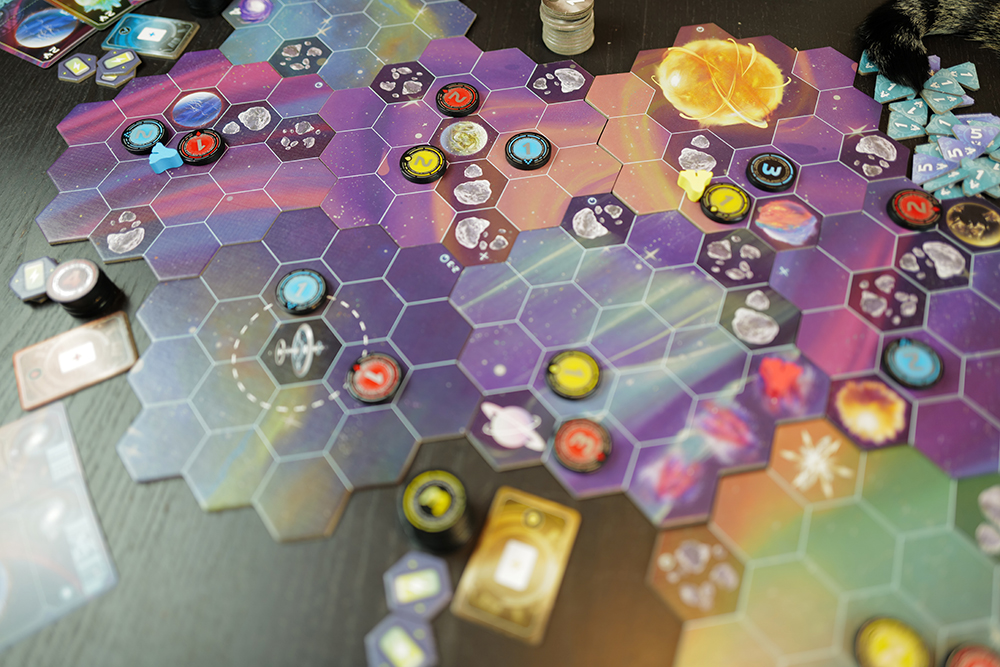 And that’s one of the reasons Wormholes works so well.  Movement efficiency is at the heart of this pick up and deliver game, and the puzzle gets bigger and better with every gate dropped.  It’s also why the game works great at 2 but we found it to only get better with more players – more spaceships means a bigger wormhole network to take advantage of, which makes for bigger plays and faster traversals, which means bigger piles of points!

Jess
It also means that the game can end pretty abruptly.  Wormholes’ endgame is triggered when the last planet is connected via gate, and if you have 4-5 players who all decide to head in opposite directions and start dropping gates, you can hit that condition surprisingly quickly.

Andrew
Yeah, for sure.  But in fairness, the game gives you 3 whole rounds after all the planets have been connected, so even though Wormholes occasionally reigns up a little abruptly, at least it tends to coast gently across the finish line, and better yet, there are no negative points for undelivered passengers or anything like that, so you’re not punished for having a full hand at the end. 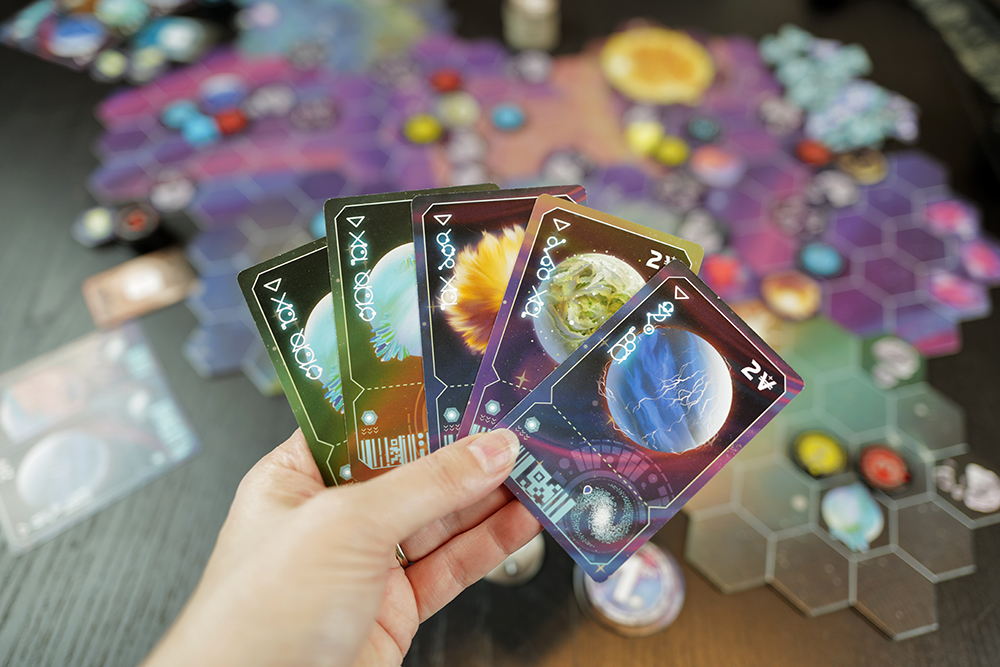 But as far as we’re concerned, that’s really the only glaring weakness in Wormholes’ design.  Granted the challenge and strategy isn’t particularly deep, but in its place is the snappy brevity of its gameplay, which encourages action over too much agonizing consideration.

On the (worm)hole, we definitely recommend checking out Wormholes.  Aside from the game occasionally reigning up a bit short, the design here is really trim and effective.  While nowhere near as brain-burningly delightful as McPherson’s previous design (the absolutely awesome Tiny Towns), Wormholes still manages to present an engaging efficiency puzzle that’s fun to play!