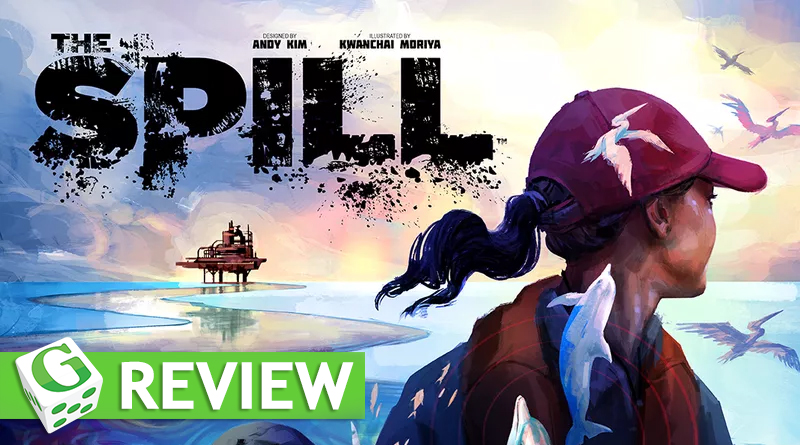 
Offshore oil rig disasters can have a catastrophic impact on the environment and the animal life surrounding it. In The Spill Players take on the roles of task force members who have been assigned to avert such an ecological disaster. While a potent lesson about the fragility of our world and our responsibilities towards it, there is of course the question: is The Spill a fun game?

The Spill is reminiscent of games like Pandemic and Castle Panic as it incorporates cooperative play with tower defense strategy and a whole load of luck. The game is centered, both literally and figuratively, around a dice tower shaped like an oil rig. In order to model the titular spill, each round sees ever-increasing handfuls of dice dropped into the tower.  These dice, which represent the spill itself, will randomly tumble into one of four quadrants surrounding the tower, and then get moved out to the board itself based on the die face they landed on.  With each die, the chances that local wildlife are affected grows and the threat of total oceanic contamination looms large.

Since you, as a team, have taken on the monumental task of trying to contain the spill and save animals from the oil, each time the dice splash out of the rig, you’ll find yourself cringing in horror. Will this next die push your part of the map over the edge? Will one section spill out over the next, creating a cascade of misery? That is the essential tension that The Spill presents: seemingly unstoppable wave upon wave of oil that will force you to agonizingly consider each of your very limited actions each round.

Each turn (that’s right, turn, not round) begins with new oil dice being dispersed across the board. That bit of randomness done, the active player will have 4 action points to use during their turn. These actions can be spent on moving, pushing back the oil (returning dice to the bag), rescuing animals, or permanently removing an oil die from the game. These actions cost differing amounts of action points, with the most powerful action – the permanent removal of a die from the game – taking 3 out of your 4 action points.

Jess
Like I said, action points are precious and a few turns into the game you’ll definitely feel like you need at least double that to win.

Andrew
But, if you are willing to risk your future, you can save the present. You can always choose to gain bonus actions by adding an extra die or two the rig next round. This can be crucial when trying to survive one more turn, but it is risky.

You win the game by either completing an objective card or surviving until there are no dice left in the bag. If the sickbay ever holds 1 of each of the types of animals or 3 of a single type of animal, you lose. You can also lose the game by having 6 or more Spill Outs.

A Spill Out is when a column in a sector has 3 dice in it. If a fourth die is assigned to a column with a Spill Out, the die will be placed in the next column in clockwise order and the Spill Out token is moved up the track, sometimes increasing the number of dice you must drop each round. This compounds your problems, so preventing Spill Outs is a big deal.

Jess
The problem is, you have these objectives that can easily become impossible to achieve if you don’t prioritize them. In one game, we needed to make sure no Octopi ended up in the sickbay. We had to sacrifice turns to save an injured Octopus instead of pushing back oil, thus leading to more Spill Outs.

Andrew
Yeah, the fact that there is no way to remove an animal from sickbay once it is placed there meant that if any Octopus ended up there, our objective would have been impossible to do. Then our only option to win would have been to outlast the bag of dice.

Jess
That isn’t to say the game is unwinnable if you fail an objective, it just becomes a whole lot harder…

As we mentioned, if an objective becomes unobtainable, then you’ll need to survive until the dice bag is empty. There are 60 dice in the bag, so it’s a daunting task, especially as the number of spill outs climb, pushing the number of dice you must drop ever higher. You can adjust the game’s difficulty, making it easier, but it feels like that defeats the purpose.

As to its presentation, The Spill has some really high points as well as some challenges.  First of all, for a 4 player game to come with 8 distinct roles is really great, and each of them will feel useful and powerful.  Each role even comes with a distinct ship meeple, which was a really nice touch.  And the oil rig itself, which provides so much of the game’s tension, is a fantastic idea.  That said, the rig doesn’t exactly snap together easily, and the fact that it can’t be stored in the box once it’s assembled means that the annoying task of muscling it together is something you’re going to have to do over and over again…assuming you don’t just throw away the otherwise-serviceable box insert.

Andrew
That said, even though it may sound like a weird complement, I thought the dice were absolutely perfect. Slightly smaller than average with an oily pattern, I thought they stood in for the spill itself perfectly.

Given its subject, it is entirely appropriate that The Spill is a tough-as-nails crisis-management game that leaves the players floundering to stem the tide.  But while it’s clear that The Spill is designed around crafting situations where the players have to make tough choices and take calculated losses, there were times when the game just left us feeling hopeless because no amount of planning could truly compensate for the pernicious nature of the dice.

Andrew
I think The Spill’s best mechanic is definitely the tradeoff of taking extra action points now at the cost of dropping more oil later. There were times when the game’s knife-edge difficulty only worked because we were willing to take those calculated risks, and I think it’s a little moment of brilliance in the game’s design.

Jess
I agree! And personally, I think the tower itself is a fantastic, visceral part of the game. The natural tension of watching dice tumble out of the rig and onto the board is really effective, so much more so than just flipping over the top card of a deck or some other randomizing mechanic.

That said, The Spill’s mechanics do invite inevitable comparisons to other games in the genre.  Whether we’re talking about the dozen flavors of Pandemic, Flashpoint: Fire Rescue, or even the unfairly forgotten The Captain Is Dead, The Spill’s central thesis, that the situation keeps getting worse and the players have to desperately mop up the mess as it keeps getting worse, is something we’ve seen many, many times before.  The moments of innovation, such as the tower, the future-dice-gambit, the variable victory conditions, and even the theme itself, give The Spill touches of uniqueness.  But at the end of the day, the question that loomed large for us was ‘does this game do enough to justify itself?’

The answer, we believe, hinges entirely on your relationship to the theme, as well as your tolerance for the truly random nature of its challenge.  The game’s greatest strength, the chaos generated by that oil rig, is also its biggest hurdle, and you’re either going to have an appetite for it or you’re not.

The Spill does an excellent job of conveying it’s theme, but in truth there are some games on our shelf that utilize this style of gameplay in a more fun way. While we’ll probably play other tower defense style games over The Spill, I do think it has a place as an educational tool. For anyone who is passionate about the environment or in a classroom setting where students are learning about the environmental impact of oil on the ocean, The Spill is fantastic. Smirk & Laughter has even worked with teachers to develop common core lesson plans and in-class activities that can be downloaded on their website. If you think The Spill is for you, then check it out on the Smirk & laughter webstore here.