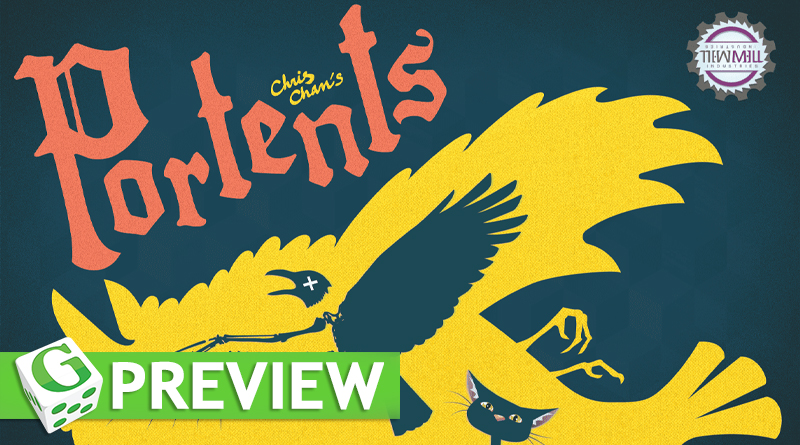 
In the world of Portents you are a fortune-teller in the position of being precariously employed by a King who’s looking to downsize his speculation budget (by offing some less than useful employees). You need to prove your worth and save your hide you need to get that King a darned good set of readings, but the other fortune-teller on staff is also on the chopping block. Who will manage to collect the omens they need to read the future and prevent their untimely doom? You’ll need to play Portents to find out! 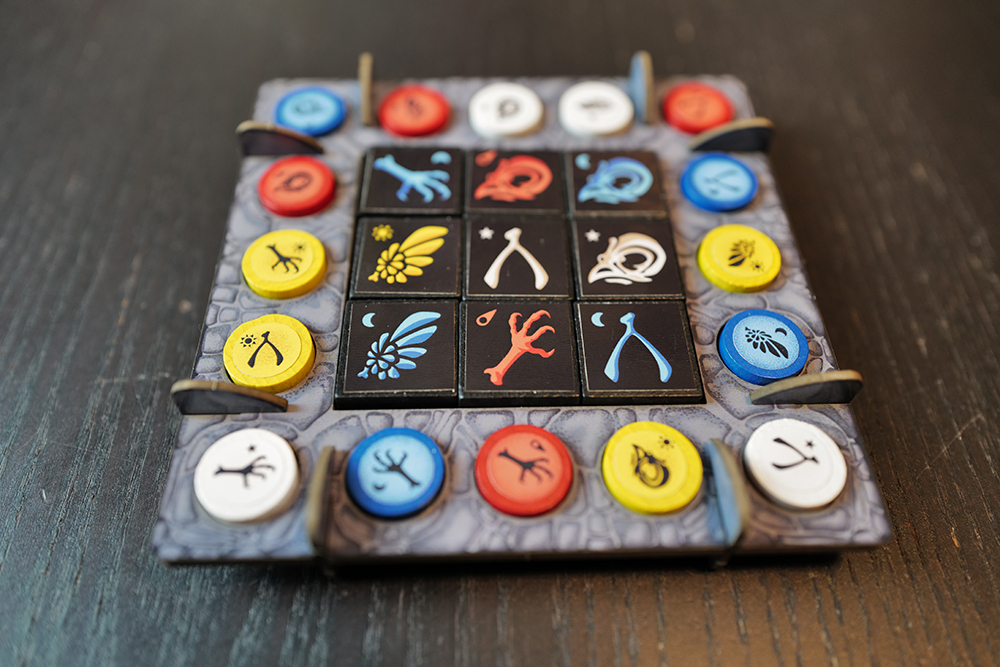 Portents is an abstract set-collection game where players take turns shifting tokens on the altar in order to create sets of symbols. The first player to collect 1 set of 4 Omens or 2 sets of 3 Omens wins! 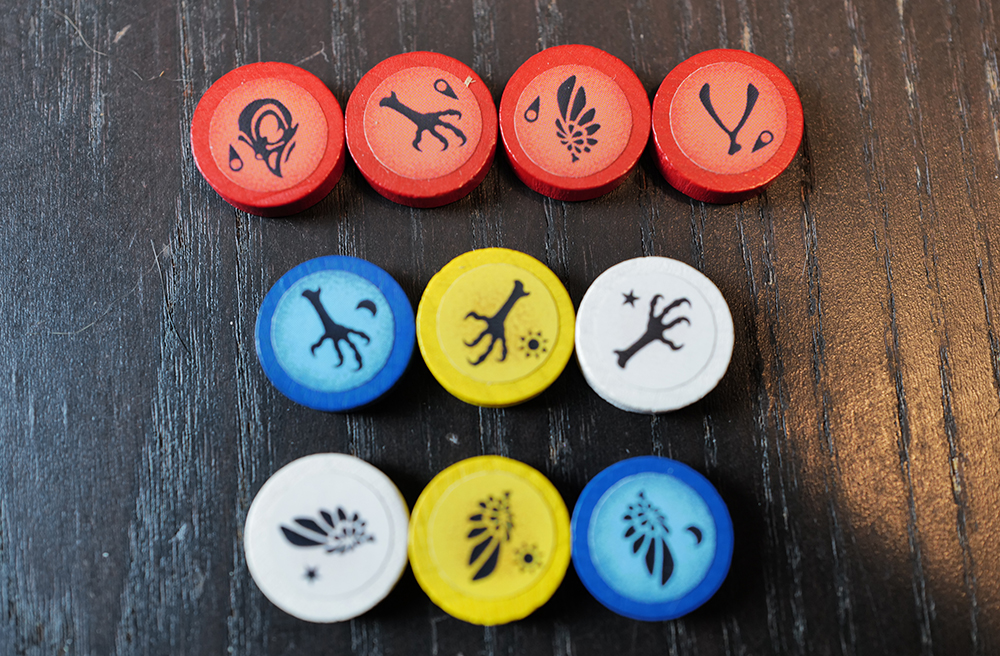 The 16 Omen tokens sit on the altar surrounding a 3×3 grid of 9 Bird Sacrifice tiles. To collect a token you need to form a Portent, which is a set of 3 matching Bird Sacrifice tiles are in the same line as the Omen you want to pick up. The tiles can either match in color or in symbol (each color has a small icon in the corner for color-blind friendlyness). 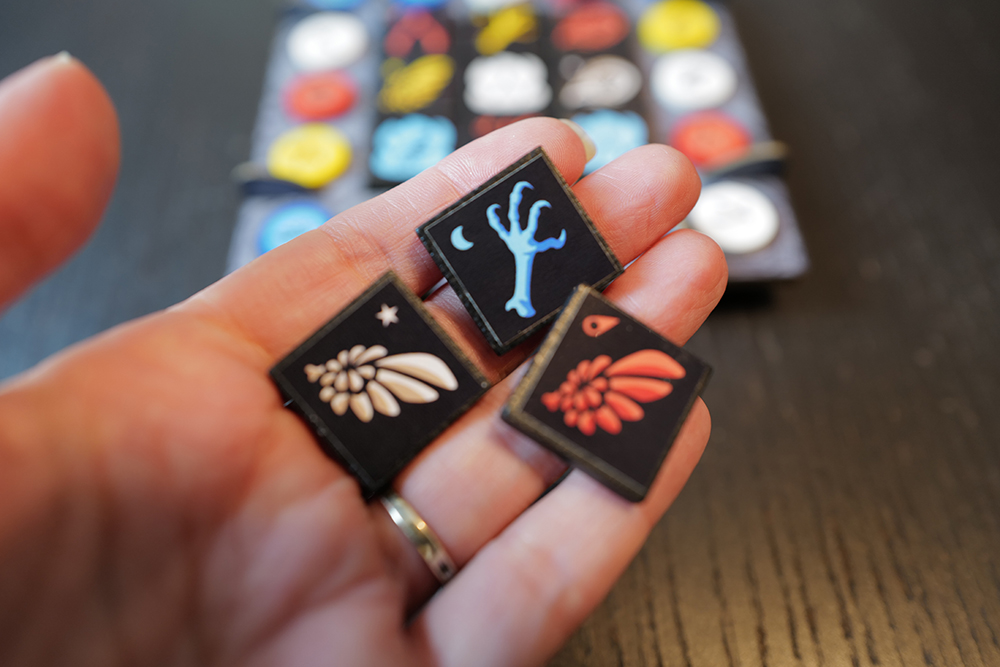 Each player will have a hand of three Bird Sacrifice tiles. On your turn you can push 1,2, or 3 tiles off the Altar, but they all must be pushed from the same side and in the same direction. You will then replace the missing tiles with those in your hand and take the ones that fell off the board into your hand.

If you have created any Portents, you can collect a matching Omen token that are in line with them. Once you’ve collected your tokens, you must then flip over one tile per Portent you created. The flipped tile is called a Burnt Offering and cannot be used to create a new Portent. Burnt Offerings stay flipped until they are moved out of a Portent, so with some clever planning you can block your opponent from being able to immediately make a set after your move.

There is a solo version of the game where you must play against a “Nekomancer” kitty cat and collect as many Omens as you can. In this version of the game there is a Kitty token that circles the board with a random Bird Sacrifice tile in tow. If the Kitty manages to circle the altar twice, creates enough Portents, or causes 4 or more Burnt Offerings to occur, the Kitty wins. As a solo player, you must create a new Portent every turn or else the Kitty will steal the Omen token it is next to. In classic cat-fashion the Kitty will also push tiles off of the altar from its location, so that darned cat will continue making your fortunetelling life hard.

Overall Andrew and I both liked the game. He’s a big fan of shifting tile games and I love set collection. The Theme doesn’t really penetrate the gameplay, but I like the story behind Portents and the art is simple but effective towards conveying that theme. I like that the Altar is made of a double layered board that keeps the pieces in place and makes it easy to keep track of which tiles line up with which Omens. The gameplay itself is deceptively simple making it easy to explain in a few moments and quick to start playing, but once you get down to the actual strategy things get thinky. I found myself planning out movements only to have to recalibrate as Andrew would shift a tile I needed off the board or flip a tile in the line I needed to move.

If you enjoy abstract, chess-adjacent style games then you’ll probably love Portents. Please not that Portents is only being produced through this Kickstarter campaign. It will not be sold in stores, so if you want this limited-run game make sure to back today! The Portents campaign runs until October 31st 10:00 AM EDT.

Portents is only on Kickstarter for a limited time. Back now, before it disappears forever!