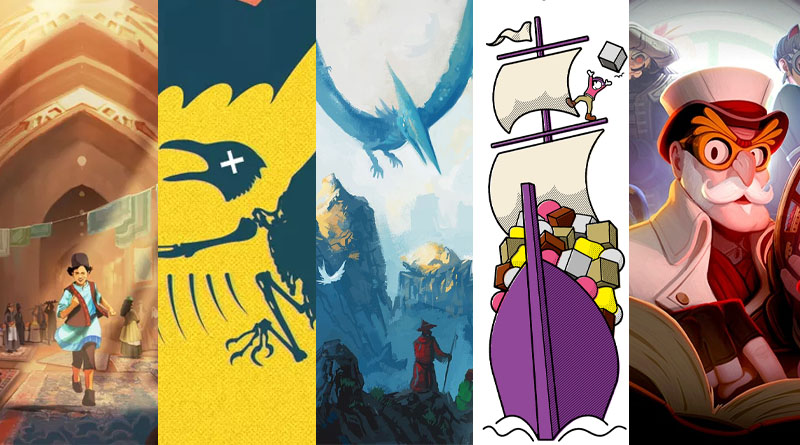 It’s been a hot minute since I did a crowdfunding wrap up. When Kickstarter initially announced their movement towards using blockchains I was conflicted about continuing to use the website. It seems like they’ve backed off that idea to a degree, but, in the time that I’ve taken off from writing about Kickstarters, I’ve explored other crowdfunding sites like Gamefound. I’ve thought long and hard about it and I came to the conclusion that I want to support the game-makers and so I am restarting my weekly crowdfunding article. Instead of just focusing on Kickstarter, I am going to be putting the games first regardless of where they are being funded. So below you’ll find the new and hopefully improved version of my Five Friday Faves from across the crowdfundiverse.

Tabriz is designed by Randy Flynn, who also created the amazing Cascadia, and illustrated by Syd Fini, a relative new comer to the tabletop scene, but well known for his work in the film, comics, and video game industry. In the game everyone plays  carpet weavers in the Persian market city of Tabriz. You’ll be using your assistants to take actions around the bazaar (buying, trading, and rolling dice for supplies). once you’ve gathered the resources you need, you can fulfill commissions and earn Prestige, Queran, Skill, and special abilities. The game ends once any player completes 9 or more commissions, or gains 14 skill. The round is finished out and the player with the most prestige wins! 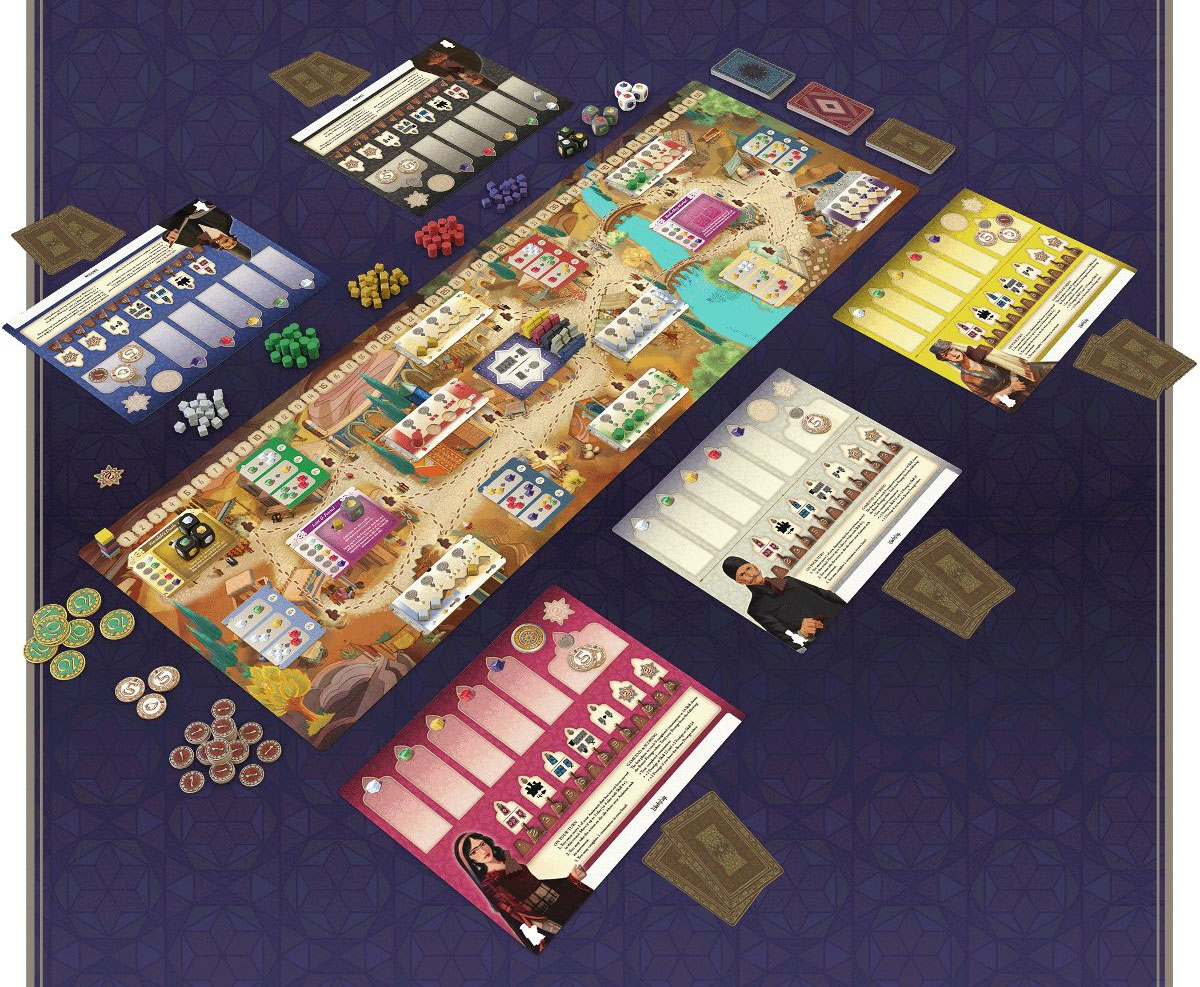 I like that the workers in the game have limited range. It makes it so that balancing the movement of your workers to make sure that you are hitting all of the actions you want looks like a fun puzzle. There are a bunch of different ways to acquire materials and one of the more interesting ones are the alley markets each of which have their own unique rules on how and what you can purchase. I suspect that I’ll really enjoy skilling up in Tabriz. As you gain skill points, you’ll move up on your skill tracker and gain new abilities like being able to move farther on the board or being able to turn in 2 commissions at once instead of only being able to complete one at a time. I like games that give a progression like this as it makes turning in a commission, quest, or what not more exciting than just gaining points. You are actively advancing your ability to win the game. With its colorful components, engaging skill tracker, and worker movement style, I think Tabriz will be a great game for anyone who loves worker placement games. You can back Tabriz on Gamefound here.

You can read our more in-depth review of Portents here, but the quick version is this: In Portents one or two players will take on the role of the King’s fortunetellers. You need to deliver a set of readings to save yourself from the King’s wrath and win the game. To do so, you’ll be playing an abstract tile moving game. On the board there will be a grid of 9 differing bird sacrifice tiles. Each turn you will move 1-3 tiles off the board and replace them with tiles in your hand. If you manage to line up 3 matching images or colors, then you will gain a Omen token and then have to “burn” a tile by flipping it. Flipped tiles cannot create new sets and can only be flipped back to their useful side by being moved out of a set. The current player wins once they have collected 1 set of 4 matching Omens or 2 sets of 3 matching Omens or if there are 4 burnt tiles on the Altar at the end of their turn. 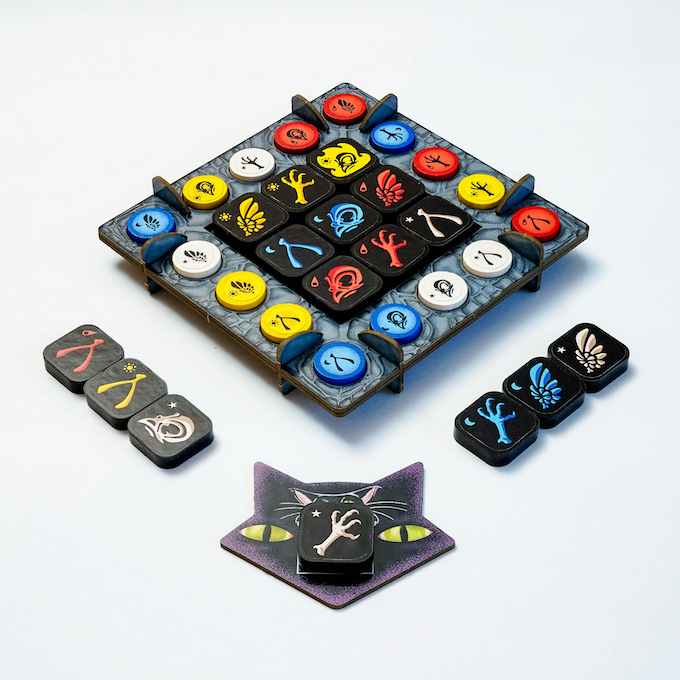 Portents is simple in design and quick to learn, but the ever-shifting tile situation means that you’ll be constantly trying to adjust for your opponents moves. If you use the burnt offering cleverly you can block their next move or even set yourself up for a instant win. I like the theme and design and, since this campaign is ending on October 31st and is being published by New Mill Industries, this will be the only chance you have to get your hands on this game. So Head on over to Kickstarter here to back it!

Having never had the chance to play Sleeping Gods, but desperately wanting to, this Gamefound campaign piqued my interest as it not only allows you to get the Distant Skies, but also the base game and upgrades. Sleeping Gods is a cooperative, adventure game where players explore a beautiful world on their steamship, the Manticore. As a campaign game you’ll progress through the story, trying to collect the totems of the gods so that you can return home. Sleeping Gods: Distant Skies is a stand-alone sequel to Sleeping Gods. It gives the same sort of cooperative, adventure experience, but now includes a new action system, improved combat, and instead of a steamship you’ll be flying around in a plane. The game board is actually a spiral bound book with each chapter being a new adventure. It includes Ryan Laukat’s branching narratives that let you make decisions and face the consequence of your actions and also has some in game uprades such as a painted airplane mini, metal stamina coins, and a foiled game box. 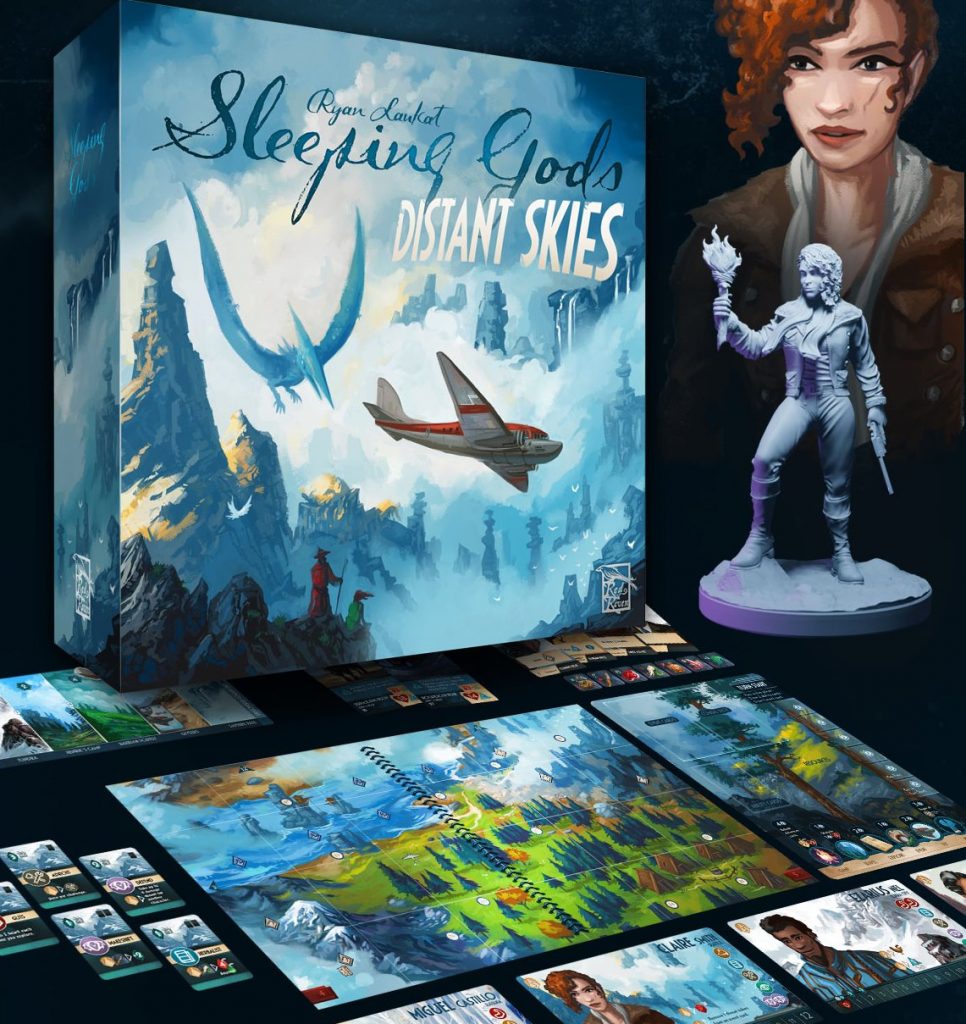 I am such a fan of Laukat games. The way he weaves storytelling into gameplay gets better with every iteration and I kick myself every time I miss one of his campaigns. The original project funded a while back without me realizing it, but Distant Skies is still in Late Pledge mode so you can still grab a copy. Don’t be me and make sure you secure your copy before Distant Skies vanishes into the wild blue yonder. Pledge for Distant Skies here on Gamefound.

itten produces some delightfully fun, tactile games and this time around they are publishing a whole pocket-sized series! The group of games first got my attention with Viking See-Saw where players are trying to balance cargo on a tottering ship. You take a penalty when the ship shifts so you have to choose what you place carefully. It just looks like a itty bitty treat that is almost guaranteed to get my friends laughing. Ninja Master is a fast=paced dice rolling game where players are trying to collect ninja and sword tokens. One player rolls the dice and everyone rushes to grab the tokens rolled. You’ll need fast hands for this one. 3 Second Try is another speedy game where players have 3 seconds to declare themselves the best candidate to complete a challenge by boasting the number you think you can hit. For example: How many movie titles can you name. Stick Collection is a bidding game where you try to guess which sticks are exactly 5mm apart in length to a central stick. Guess right to collect sticks and increase your score. The title Judge Domino makes me think of Karl Urban in a bucket helmet meting out “justice”, but in reality the game challenges players to guess if a  a line of dominoes will succeed or fail in toppling over. Use differing sizes of dominoes and clever angles to confuse your opponents.

There is an element of whimsey that absolutely charms me when it comes to itten games. All of these seem like bite sized games that will amuse and entertain without hanging around long enough to wear out their welcome. If you need a pocketful of games to bring along on a trip or to your next game night, the Funbrick Series is probably right up your alley. Back the series here on Kickstarter.

I was first introduced to ILLITERATI at Gama and I have to say that I was very intrigued at the idea of a “cooperative survival word game”. In the game players will draw Books that will set the goal for the round. You’ll need to take the letters available and spell words to meet the challenge before the time runs out. You can trade letters with the other players, but you have to try to use all of the available letters and if you fail the left over letters are discarded with one letter being removed from the game. If you burn too many letters the game ends in a loss. As an added challenge, some dastardly villains, called the Illiterati, are working against the players and will, at the end of each round, force players to discard letters based on that villains sinister scheme. If each player completes 2 books and then everyone finishes off the “Final Chapter” then the group as a whole wins. 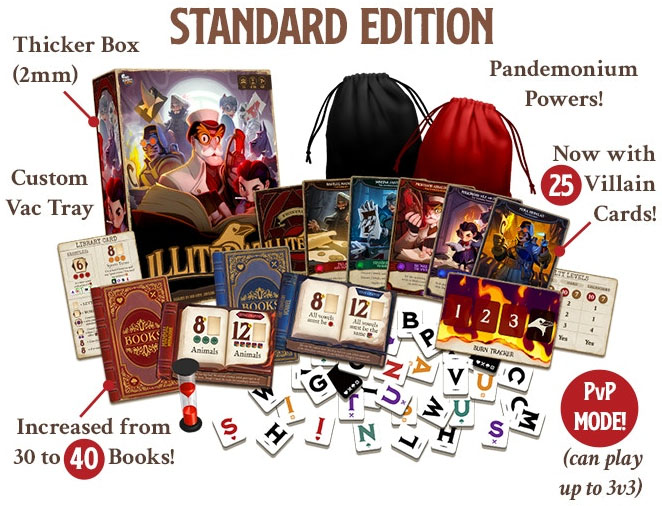 The production of the game looks absolutely fantastic. I love the sliding book box and use of wooden tiles alongside the fantastic villain artwork. The cooperative gameplay means that players who are not the strongest spellers can still have a great time with the assistance of their friends. If you like spelling games with an edge of speed and cooperative play, then make sure to get your hands on ILLITERATI. ILLITERATI has already funded, but you can pre-order the game via the Kickstarter page here.