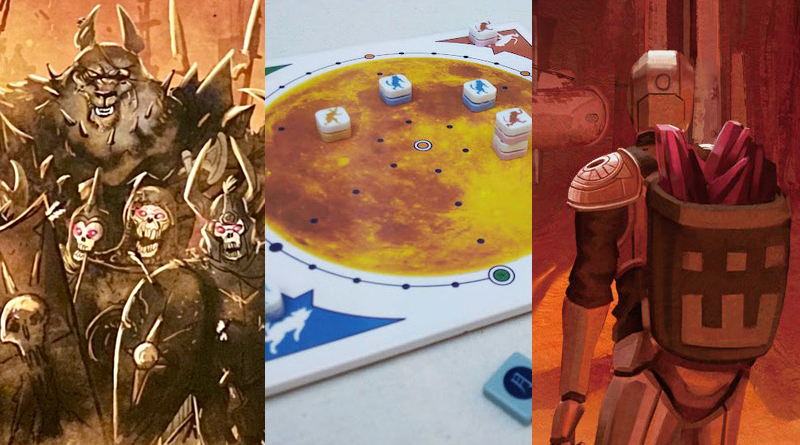 Jess
It’s a new year and a new chance to back exciting games! Unfortunately this time of year is a little light on new projects, but I’ve still been able to find a few standouts. Let’s see what this week has on offer!

We’ve been long time fans of the Valeria series so its exciting to see a whole bunch of new content coming out. In this project, Daily magic Games is publishing a new game called Guild Academies of Valeria. On top of that they are reprinting Shadow Kingdoms of Valeria and its first expansion, Rise of Titans and also printing a new expansion called Riftlands. In Guild Academies of Valeria players take on the roles of Headmasters trying to bring their academies the most success. You’ll select students, hire professors, improve your school, and gain favor with the Town Council. The game has a lot going on with its action selection, dice drafting and dice manipulation, tile drafting, resource management, engine building, contract fulfillment, and unique scoring rules. I suspect it will be fun to dive deep into this one and explore all of the different avenues to success.

Shadow Kingdoms of Valeria is a game where the monsters are looking to take back their lands from those annoying humans, elves, and dwarves. Players will command armies of monsters to conquer lands and gain victory points. The monstrous leader who has the most victory points at the end of the game, wins!

If you are a fan of the series or are intrigued by playing games all set in the same universe, you’ll probably enjoy any of the games in Valeria. To learn more about these games check out Riftlands & Guild Academies of Valeria on Kickstarter here.

Do you want to play a 1,300-year-old game? Mitsuo Yamamoto is aiming to let you do just that. He has taken an ancient Japanese board game about racing and modernized it. In this 2-4 player game you will be trying to move your 4 pieces along the path as quickly as possible. To move your pieces you’ll use 2-sided “kari” tiles. Each turn you will throw the kari tiles and move a piece as many spaces as the kari dice show. If you piece reaches certain spots on the board you can change its direction of movement, effectively taking shortcuts. If your piece lands on another of your pieces you can stack them and move them as one. If you land on your opponents pieces then you’ll send those pieces back to the reserve. Whoever passes the 30 point first, wins.


Moon Trek seems like a strategic game and a really unique piece of art. All of the pieces are crafted out of ceramic tiles and you can get a couple different versions of the game. Moon Trek is the 2-4 player version, but there is also Kariuchi (a 2 player version) and Kariuchi Compact (a more portable version). If you like racing games or are a fan of history, Moon Trek is a fascinating take on an ancient game. Check it out here on Kickstarter.

Mining Colony is a space mining game with tile placement and resource management mechanics. We covered the base game two years ago and found it light and quick to engage in a fun way. Mining Colony: Secret Missions is an expansion pack that adds secret objectives for each player. During the game you’ll receive  a card depicting six different items (worker, ship, and 4 different crystals) and their locations on specific spaces.

If you can manage to arrange your colony to match the pattern by the end of the game you can score up to 15 points. This is a quick and easy way to add a new layer of challenge to the game.  If you haven’t tried Mining Colony then this project is a great way to pick up a copy. Check Mining Colony: Secret Missions out on Kickstarter here.

What projects are you backing this week? Let me know in the comments below or on Twitter with #GameCrowdfundSpotlight and check back next week for more fun projects!