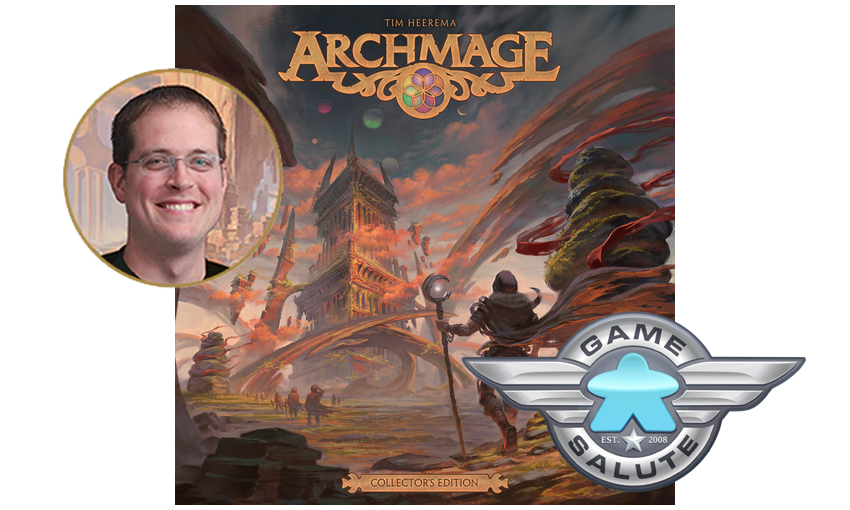 Game Salute’s new area control game about mages in a post-apocalyptic landscape, Archmage, has beaten its Kickstarter target and is now in stretch goal territory. The game is gorgeously illustrated by Enggar Adirasa and has some neat mechanics that make it really appealing. To get a look behind the scnenes of developing Archmage, I spoke with the designer,  Timothy Heerema.

Jess: Hi Timothy! Thanks for talking with me today. I see you’re a doctor as well as a designer. How did you get into game design?

Timothy: I love being a rural family doctor.  It offers a unique and treasured insight into the lives of my patients.  I feel very blessed to do what I do.  However, there are days when I get home and its hard to shake off the day’s troubles, and there are nights when I can’t sleep due to constant flipping of my schedule from days to nights and back again.  I needed to find an enjoyable hobby that was engaging enough to pull my brain away from work. 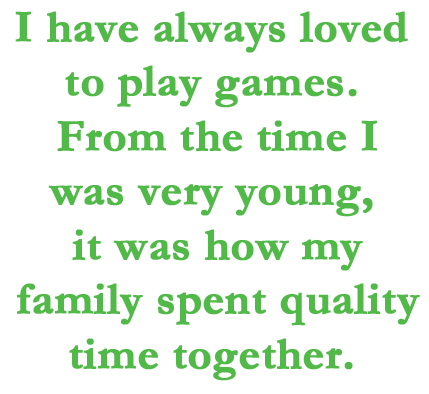 I have always loved to play games.  From the time I was very young, it was how my family spent quality time together.  As I went through high school and university and med school, I found friends that were similarly inclined, and found it to be a great way to take a break from studying.

When my wife and I got married and then had kids, we needed a way to spend time together at home without always defaulting to the TV set.  And then when we moved to a small rural town, she wanted to try something new and we took the plunge of opening a game store!

Gaming has always been there for me.  My personal collection bloomed to more than 500 games, but like many gamers I was still always eager to try something new.  However, after awhile, I started to feel that there was “nothing new under the sun”.  I was disappointed that the hobby seemed at times to retread the same ground repetitively rather than branching out.  So, I set myself a mission – design games that bring something mechanically new to the hobby!  People are often surprised to hear that in the very early stages, Archmage started as an exercise in new board game mechanics rather than being built around the rich fantasy theme.

Jess: The game has a pretty deep story. How did you come up with it? Is it a world you hope to expand upon in future games?

Timothy: Another one of my hobbies has been the consumption of large amounts of fantasy literature.  I have a whole wall in my basement full of paperback novels – and all of them are fantasy series.  I’ve seen how a somewhat familiar and common story arc can be taken in a variety of unique directions – often based around a compelling magic system.

When I submitted the game to Game Salute for consideration, I already had the core mechanics of Archmage firmly established.  But the story was pretty bland.  That’s when Dann May – the Game Development, Art Direction, Graphic Design guru at Game Salute – got his hands on my creation.  One of the first things he wanted to do was focus on solidifying the theme of each sphere of magic.

As part of this exercise, we found mythic races to match the mechanics.  And from there we created the story of the land in a series of back and forth emails – constantly tweaking and expanding and chopping until we were happy with the result.  It really clarified the whole development process going forward and the game changed dramatically in the following year – not just thematically, but mechanically.

Now, when we consider future expansions, it’s easy to think of fun ways to expand the world:  other items of arcane power?  new hybrid races?  truly magical locations? story or campaign modes?  The story is ripe for expansion.  Getting the mechanics down in a balanced fashion will be the challenge!  And yes, other games set in the same world would definitely appeal to me, but Game Salute probably gets a say in that option…

Jess: What is your favorite aspect of Archmage and what do you think players will love most about it?

Timothy: My favorite aspect of Archmage has got to be the Wheel of Magic. 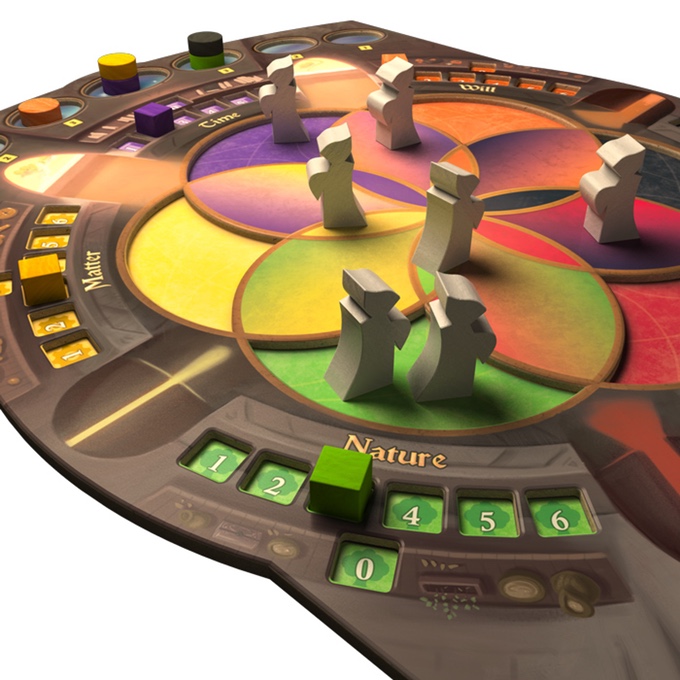 Coming up with six unique spheres was challenging, but in the end it was very rewarding.  In theory, this Wheel lays out six potential paths to achieve victory.   But where it gets more exciting is the idea of blending overlapping spheres to create some new form of magic!  I have never seen a game that uses Venn diagrams before, and apparently, I’m not the only one who finds them fun!

Adding a further layer of complexity – I like the flow of both gaining and potentially losing knowledge.  Coupled with a limited supply of followers, which must be used for a variety of purposes, the game forces players to make some tough decisions along the way:  “If I want to gain something, I’ve got to give something up…”  I love that tension.

And not just that – there’s also the tension of spending relics to cast the spells you currently know, versus saving them up to gain more apprentices and expand your options!

But, I especially love that the Wheel is adaptable to your needs as you play.  If your opponent tries a specific strategy, there is a way to rejig your spell array and counter their approach.  I hope that players find it a good balance of strategy and tactics.

Jess: Enggar Adirasa’s art is truly breathtaking. Did you give him a lot of direction going in? Did his art influence the design process at all?

Timothy: I completely agree that Enggar has done a magnificent job on the artwork! It’s been a huge asset to the project and helps to get people interested in learning more about the game. 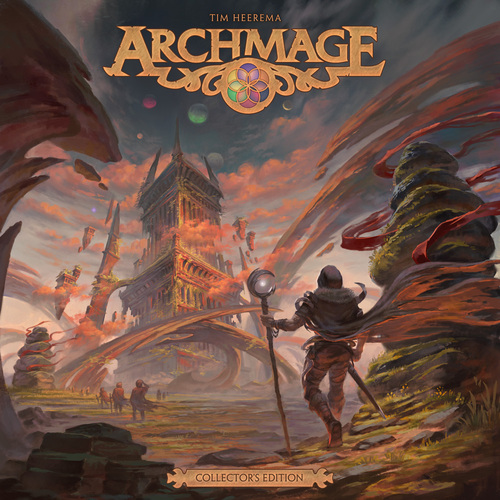 I personally cannot take much credit here, as I have very limited skills in the area of visual arts.  Dann and I would toss around ideas for themes and descriptive names for the spells, and at a basic level I would offer my input on art ideas.

He would take that and flush it out to a more concrete layout, and then pass it on the concepts to Enggar with some freedom to create the final piece.   We have been very happy with results.

As for influencing the design, probably not too much for this base game.  But it definitely helps to stimulate the imagination for expansion possibilities…

Jess: With the success of the game on Kickstarter, what do you think is next for you?

Timothy: A vacation! As fun as the Kickstarter aspect has been – it’s also pretty draining. I will do my part to make sure the rulebooks (multiplayer and solo) are tightened up and clarified as best we can, and then I’ll likely disappear for a month. After a small break, I’ll dive in to developing the expansion ideas that are tumbling through my head.

I also have two other unrelated games that are 75% done… I hope that a successful first title will get my name out there and open some publication opportunities for my other future projects! Stay tuned!

Jess: Thanks again Timothy for chatting with me about your exciting new game!

Archmage still has 7 days to go so head on over to the Kickstarter to learn more and add your pledge today!