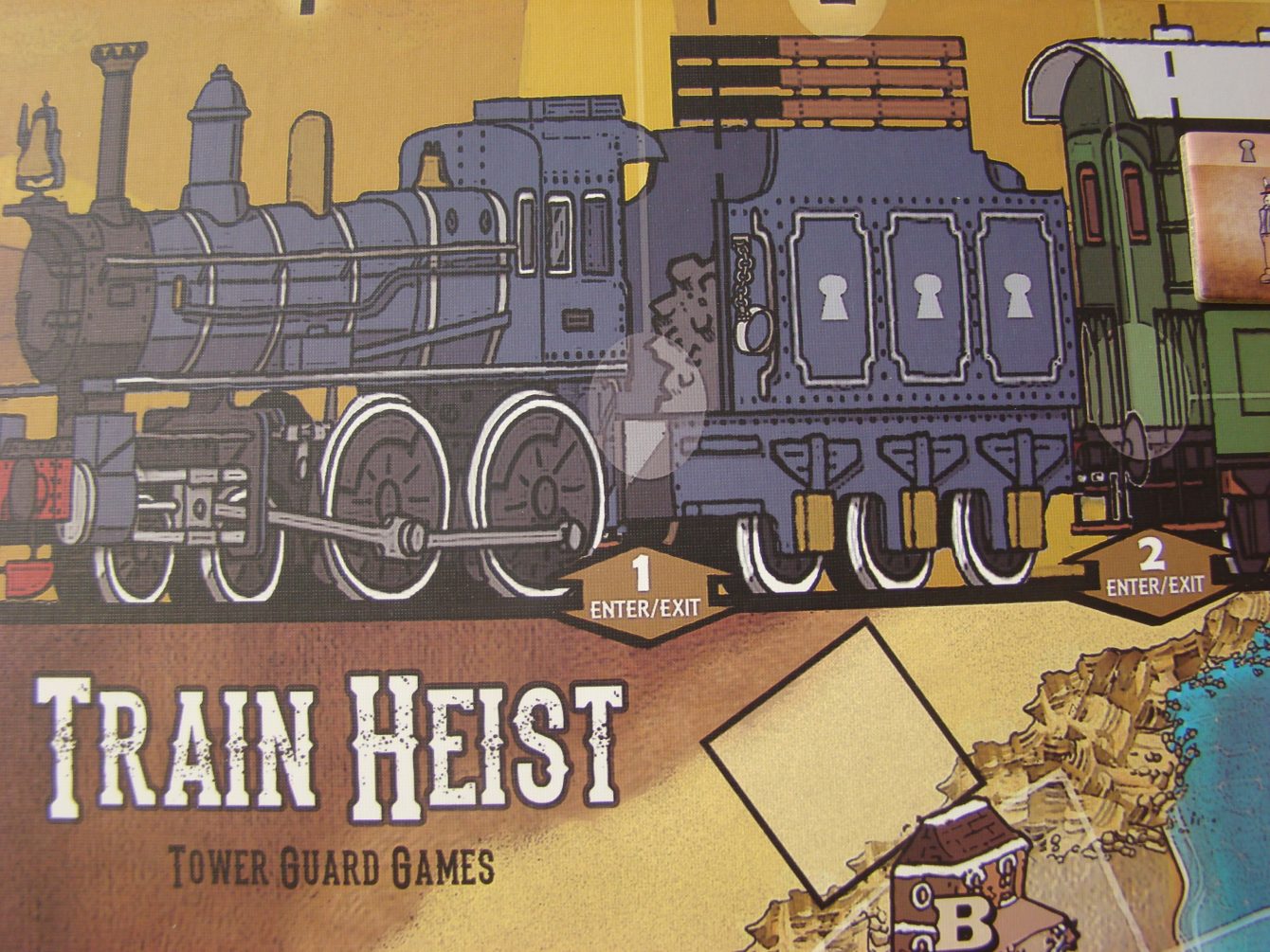 If Colt Express is the board game equivalent of an Oscar-winning summer blockbuster, Train Heist (Sean McDonald, Tower Guard Games) is its low-budget, limited release, indie counterpart.  The result of a successful Kickstarter and a healthy dose of Rahdo-hype, Train Heist doesn’t have the swarthy, toy-like bluster of its Spiel-des-Jahres-winning big brother, but what it does have is subtlety, fiddly nuance, and a theme so delightfully implemented that (as in the best of games) the mechanisms work in the service of the story you’re telling, and not the other way around. 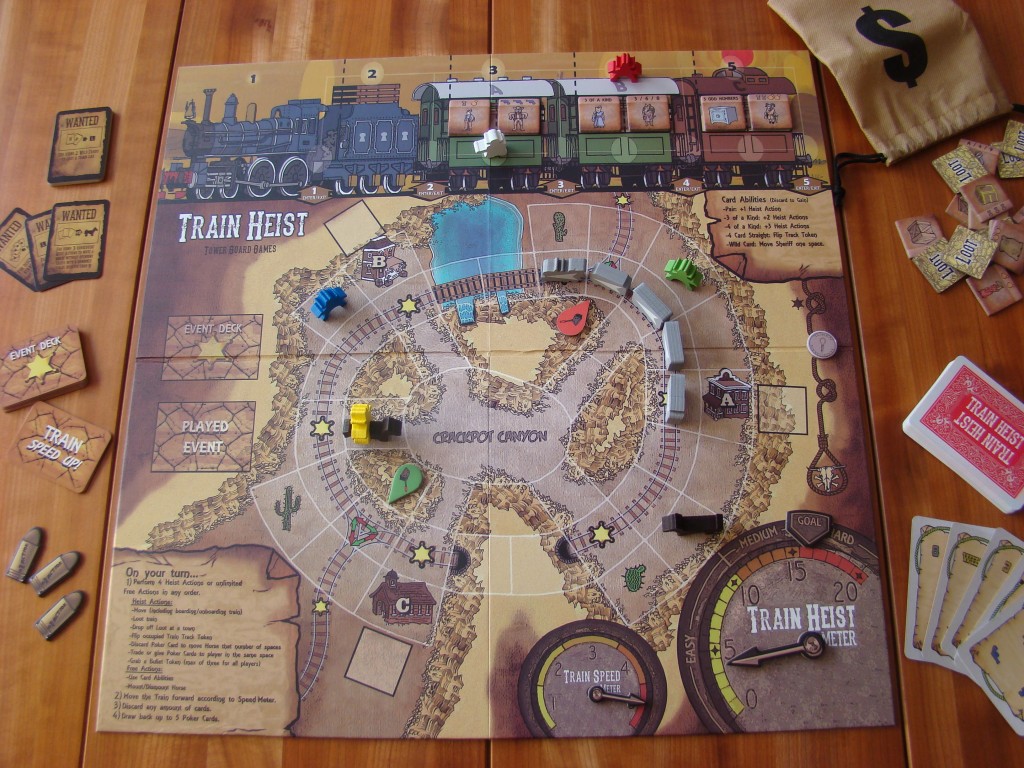 Train Heist is a cooperative (or not!) action selection game in which 1-4 players are riding around the board on horses, boarding a moving train, avoiding the corrupt sheriff, robbing loot, and delivering it to the impoverished locals of nearby towns.  The most clever design choice in the game is the board itself—and I’m not even talking about those nifty magnetic dials (which, I mean, why hasn’t anyone else done this?).  The board is divided into two sections: a macro perspective in which there is an actual five-car train running a circuit between three towns, and a micro perspective in which, once your outlaw meeple has boarded the train, you can move from car to car, looting the riders.

The board offers players the opportunity for choices that are not just strategic but also downright fun.  This is a game in which you can hop on the caboose of a moving train, thieve some gold and jewelry while sneaking past the sheriff, climb to the roof of the train, whistle for your horse, leap from the train to your horse, and ride to the nearest town to deliver the goods to grateful townsfolk. 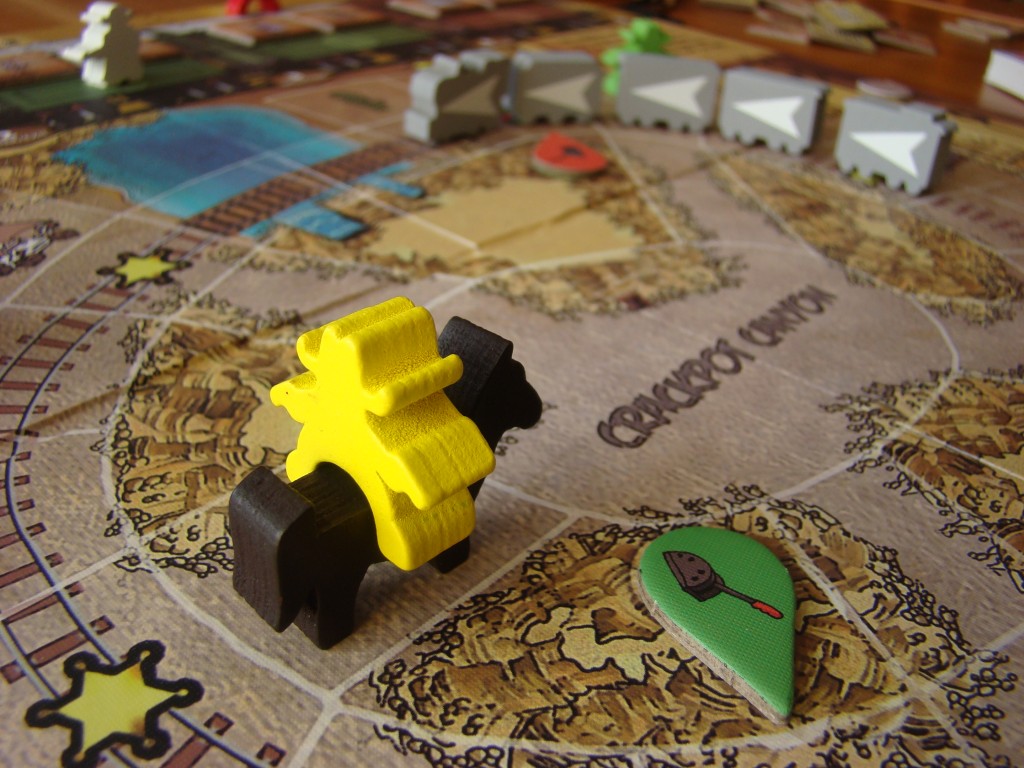 And the problems you’ll encounter make perfect story sense:  The train may speed up or switch tracks, making its movements somewhat unpredictable.  The surrounding canyons and tunnels may make it impossible to board the train at certain times.  Don’t be crawling across the top of the train when you come to a tunnel, or you’ll find yourself knocked flat in Crackpot Canyon.  If your horse is standing on the tracks when the train comes, well, let’s just say the rest of your train-robbing exploits will take place on foot.

Plus, there’s a deck of Wanted Cards that give players special abilities if they perform particular feats.  For example, the first player who exhibits the agile feat of jumping from the train roof to a horse becomes a Wanted Outlaw and acquires the special ability of being able to crawl in and out of the train car windows rather than simply going through the doors at the ends of the car. 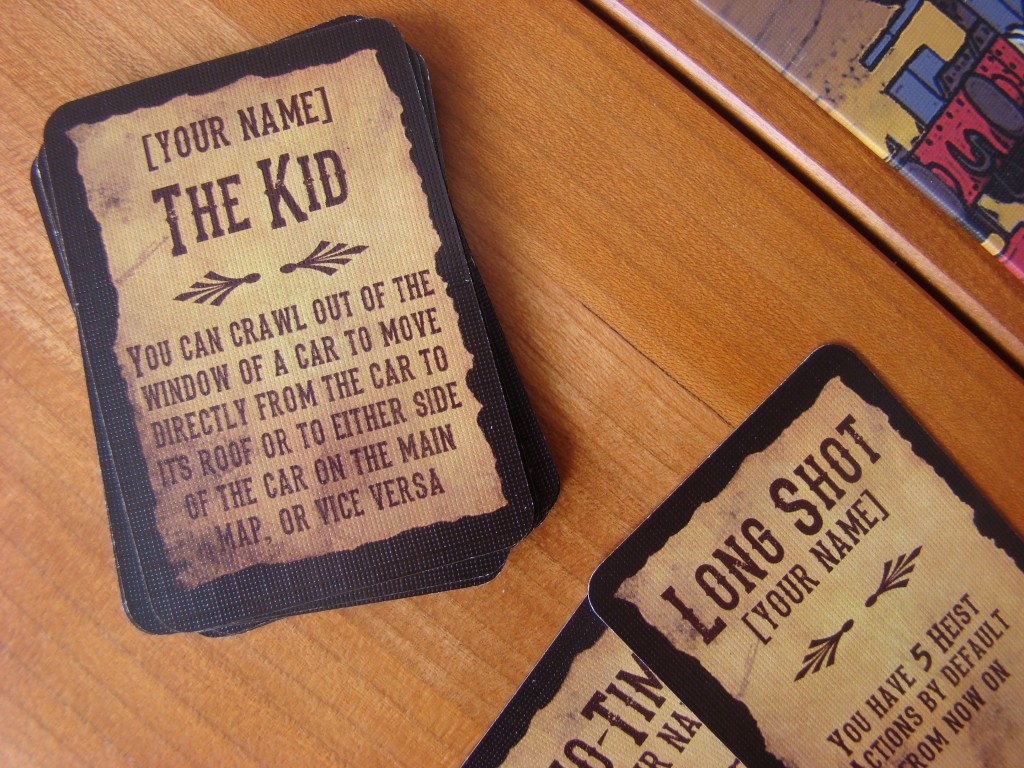 The most curious thematic choice in the game is one that the rulebook glosses over.  It makes plenty of sense to be Robin-Hooding around, looting the corrupt one-percenters on the train and returning the goods to the needy townspeople.  However, once those goods are returned to a town, they are simply seized again by the corrupt sheriff the next time the train passes through—and if the train ever arrives at a town where there are no goods to loot, a hangman’s marker moves down one knot toward the noose.  Reach the noose, and the game immediately ends.

Josh:  It’s like some kind of Sisyphean spaghetti western.  Colt Express meets Jean-Paul Sartre.  And I love it.  What you might call a wonky rule to drive the endgame, I call philosophical insight! 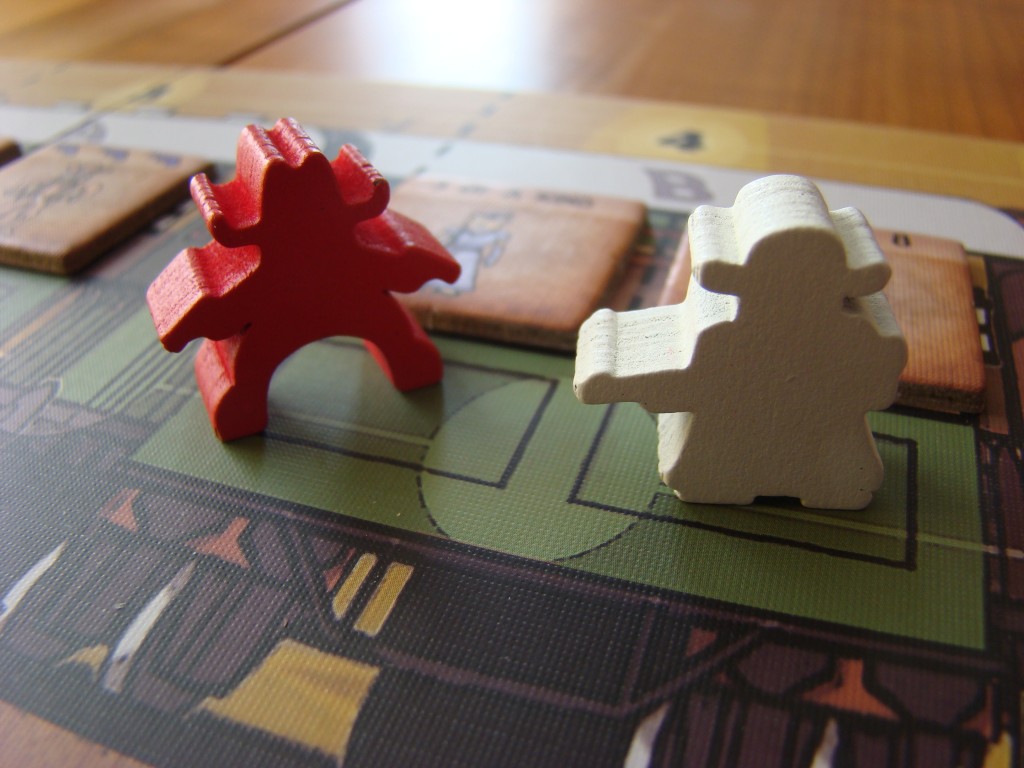 The only truly unthematic mechanism is the one by which you actually steal the loot from the train, which involves collecting certain poker hands of cards that allow you to steal certain loot.  Obviously, the game needs a way to make stealing loot more strategic and challenging—but discarding certain combinations of cards?  What am I actually doing, thematically?  Am I boarding the train, pointing my pistol at some lady and stealing her diamond necklace, or am I sitting down with her and winning her necklace in a nice, consensual game of poker—all before the sheriff finishes his patrol?  Okay—so this is a little niggle, and one which I am happy to overlook since even this unthematic mechanism employs the old west theme of poker hands.

Ultimately, Train Heist succeeds because it is a game that gives you points not just for playing the game but for playing with the game—for doing all the things that you would want to do anyway.  That’s why it works, strangely enough, both as a solo and as a multi-player game, and can be played as either a co-op or a competitive game—with only minor rules changes!  Granted, escaping from the jail car (where you are put if the sheriff catches you), can be a devastating luck-based irritant in the competitive version—but that’s all the more reason to play carefully enough not to get caught by the sheriff in the first place.

The game is an activity, a drama, and it doesn’t really matter what side you’re on—whether you’re part of a posse or whether you’re a lone wolf—whether your story ends in tragedy or triumph.  No matter what, you’ve pulled off some pretty impressive stunts.  Remember that time you stole some loot right under the nose of the sheriff while the train went through a tunnel and then leapt out the window and arrived at town before the train did?  You’re still smiling about that—even while you stand on the gallows with the hangman’s noose around your neck.

One thought on “Train Heist Review”