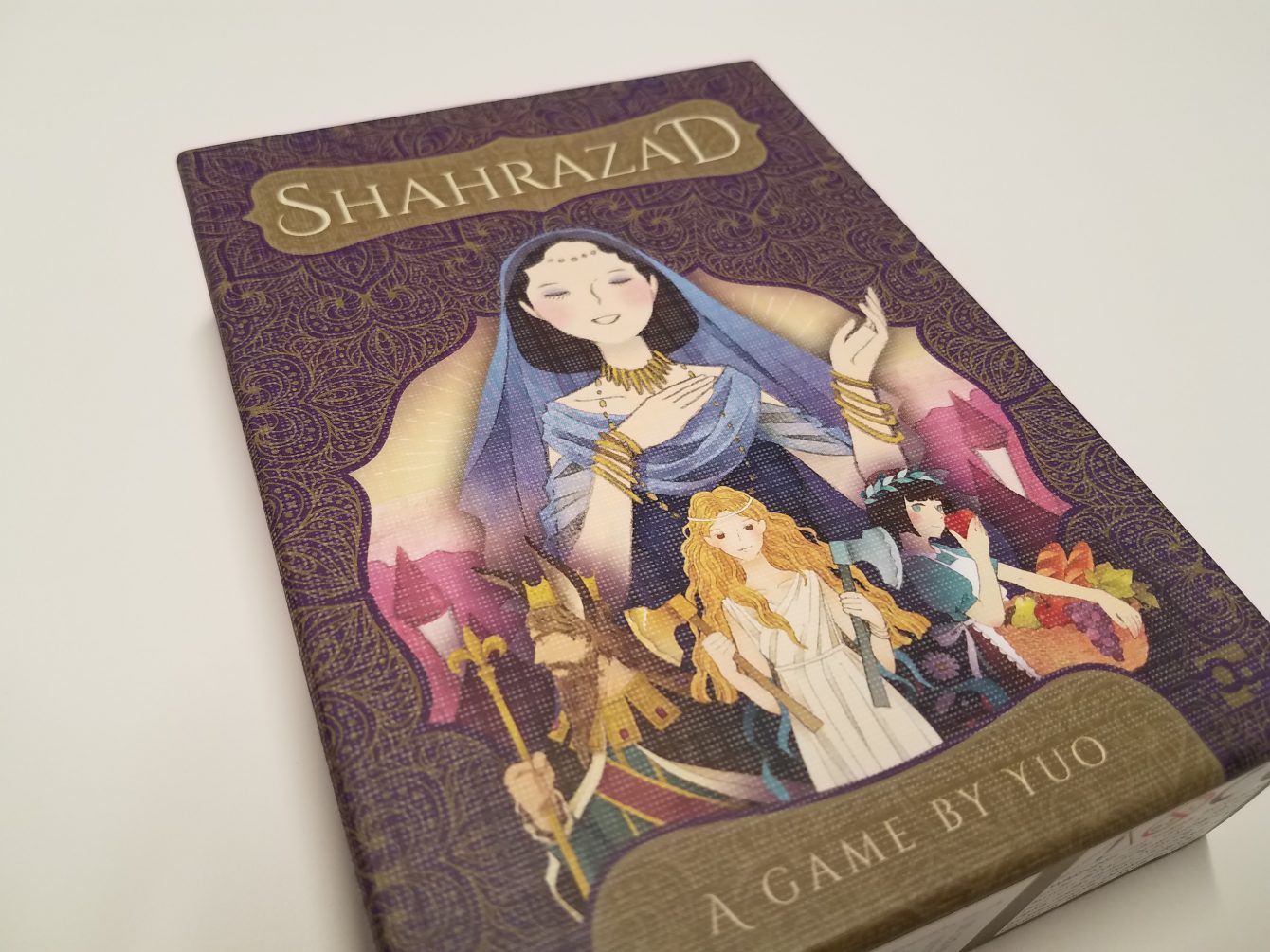 Shahrazad is a microgame for one or two, combining delightful presentation with an abstract tile-laying puzzle.  A simple puzzle as a solitaire game, we found it harder (and thus a bit more fun) at two.

When I first saw Shahrazad, I wasn’t sure precisely what to expect.  The stylized art and compact box suggested a lighter-fair game, and the subject, of course, evoked the idea of storytelling.  What I wasn’t prepared for was a completely abstract tile-laying almost-microgame for 1 or 2.

The theme of Shahrazad is to tell a cohesive, engaging story to the king, weaving together classic characters from throughout literary history.  In practice, though, you will be placing numbered tiles into a tableau, seeking to form groups of like-colored tiles that ascend in value from left to right.

Whether you are playing Shahrazad as a single or 2-player game, the flow of the game is precisely the same.  To set up, some tiles are secretly removed for the round (to deter tile-counters), the rest are shuffled and 2 are dealt to each player.  Finally, a single tile is placed at the heart of the tableau, forming the seed from which your story will bloom.

Jess:  Not that there is any storytelling to be found here.

Andrew: Nah, not at all.  It’s all just an abstract puzzle, trying to figure out how best to place tiles within the limits of the placement rules to try and make the highest-scoring tableau possible. 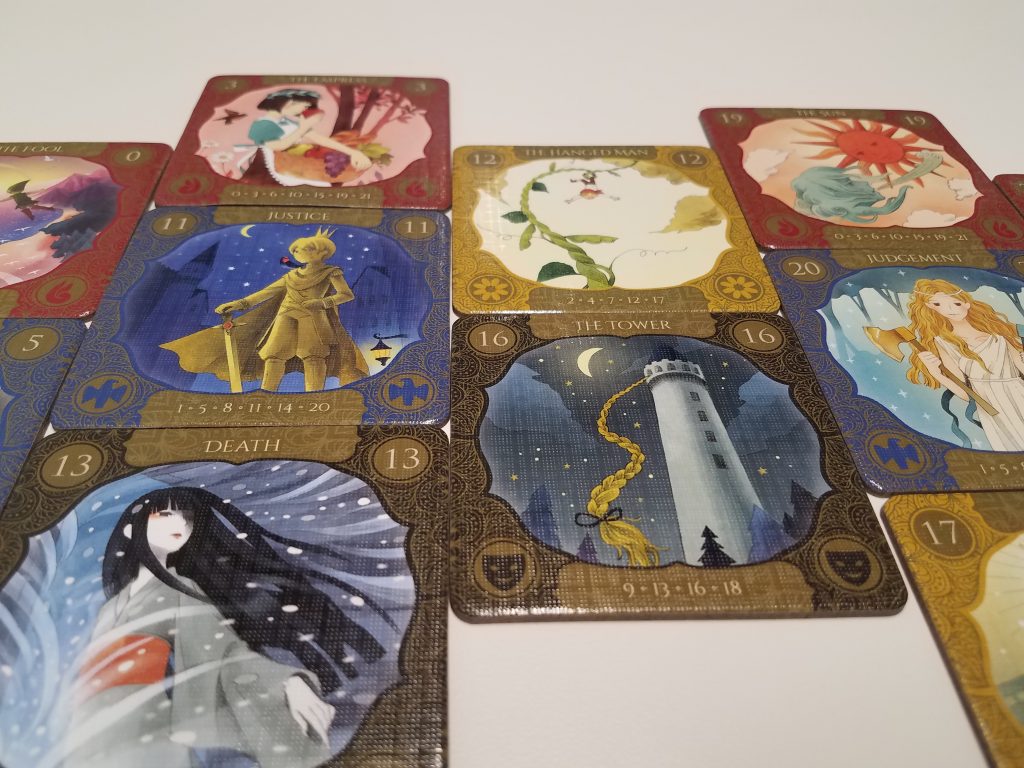 Tiles must be placed adjacent to each other, and will only score if they increase in value from the tile on their left.  Each column of tiles can only hold 3 (or 4, in a solitaire game) tiles, but there is no limit to the number of tiles players can create.  A player can, optionally, swap a tile from their hand with a tile on the table; however, after completing that action, a player still refills their hand by drawing a tile, meaning that they will be left holding 3 tiles, and on their next turn they must play 2 tiles. 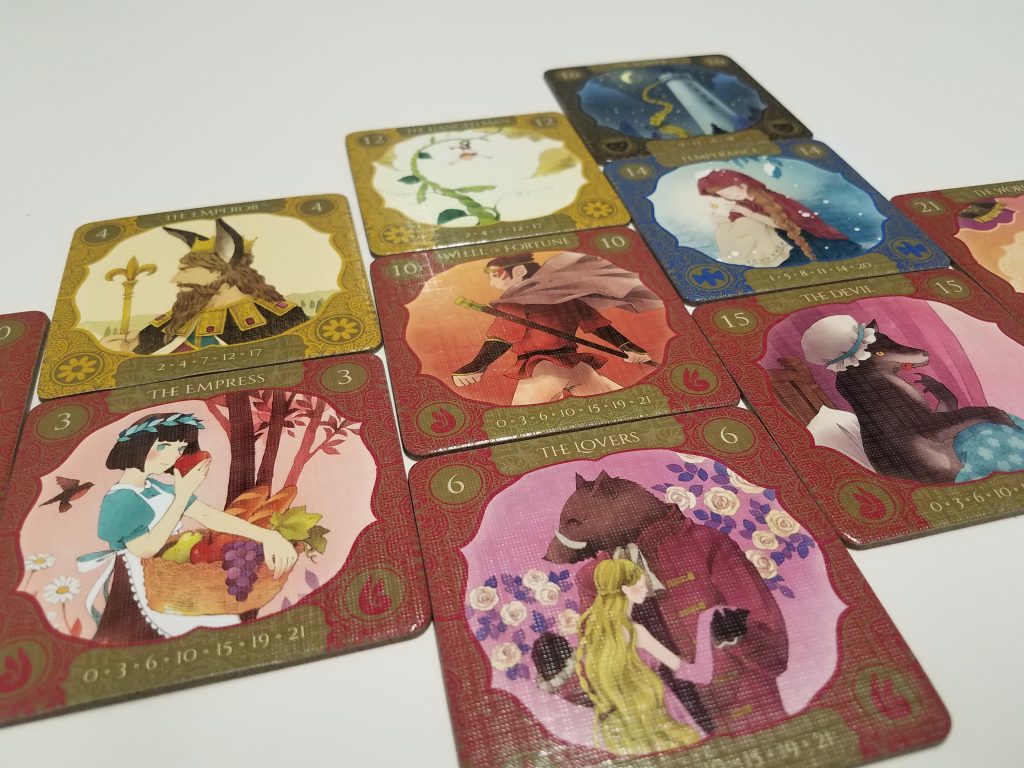 Play continues until all tiles have been placed.  Once that’s done, each tile is assessed to make sure it still counts.  Any tile which doesn’t meet these criteria will be turned face-down, counting as negative points during scoring and potentially disrupting chains of tiles.  In order for a tile to count, it must:

Once that assessment is done, players will score based on each contiguous colored area.  Then, after subtracting points for face-down tiles, play proceeds to a second round.  Once this second round is finished, so is the game, with the combined score of both rounds telling players how well they did. 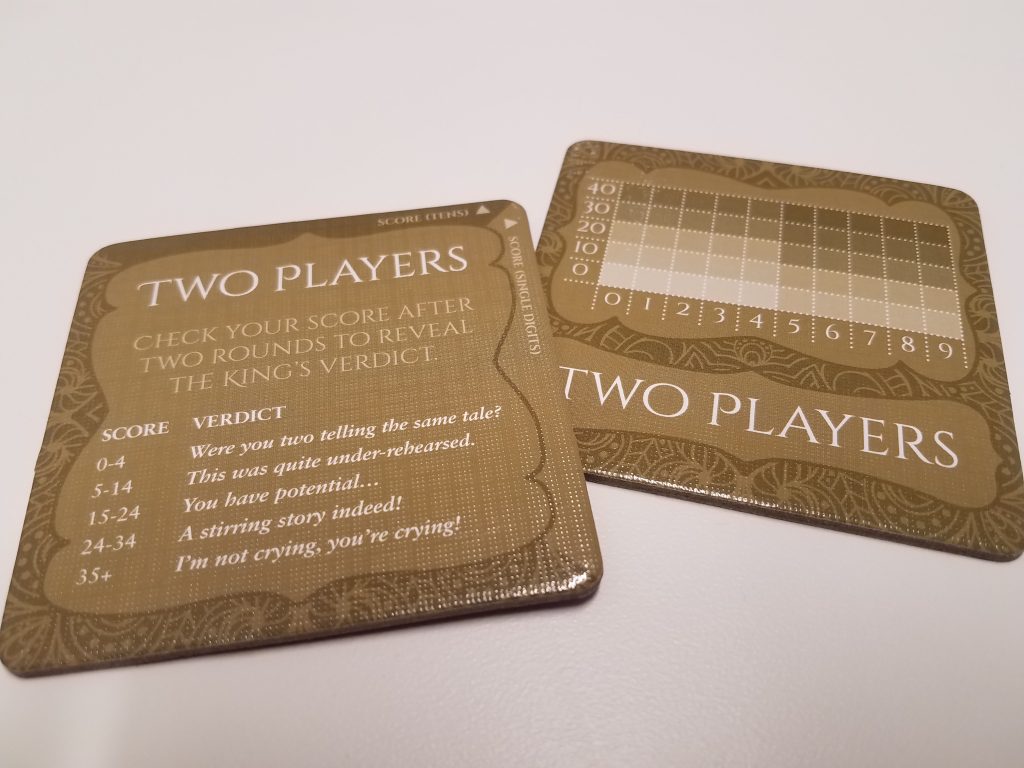 Andrew:  Played alone, Shahrazad is a pretty, simple puzzle of a game.  Since you are constantly forced to place tiles, even when they aren’t optimal plays, you’ll need to figure out how best to play each piece, and hope that your luck holds out and you don’t end up drawing tiles in an inconvenient order.  It’s short but a bit thinky.

Jess:  Yeah, and in the 2-player mode, all that still happens, except now 2 people are holding tiles.  And the rules state that you can’t discuss exactly what’s in your hand (at least not until you commit to playing a tile), so you and your partner will need to feel your way through, turn to turn, trying to decide how best to play each tile.

Andrew:  It reminded me, in mechanics, of IDW’s The Game, which has an inexplicably theme but can play more people.  Ultimately, for two, I think I like Shahrazad a touch more for its spacial puzzle aspects.

We found Shahrazad to be an enjoyable, if very simple filler.  The real point at which the game sparkles a bit for us was the 2-player mode, because it introduced a little more challenge and the need to coordinate between players, but it’s a perfectly serviceable solitaire offering.  Unsurprisingly, Osprey Games delivers yet another beautifully presented title; Shahrazad looks great on the table, and the tiles are thick and very well-made.

We had fun with Shahrazad and recommend for anyone looking to fill the niche of a small-box filler that one or two people can puzzle through in a matter of minutes.  And while many may prefer it as a solitaire title, which reduces its difficulty considerably, we actually liked it just fine for 2, where the increased challenge lent some depth that Shahrazad is otherwise lacking.