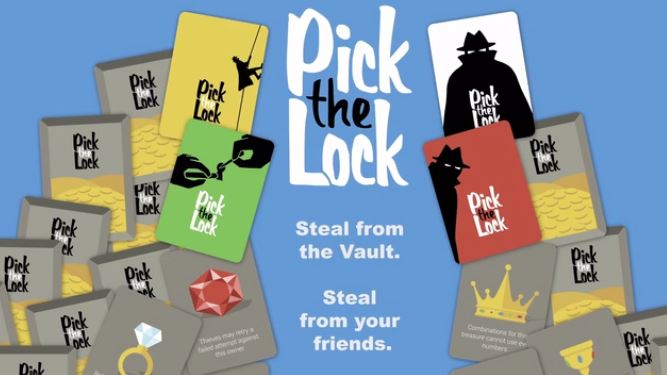 Pick the Lock from Portal Dragon Games is a light, quick game that will get you gritting your teeth at your eerily psychic friends.  It’s up on Kickstarter right now, with less that 24 hours to go!

Andrew: You know there is no such thing as psychics, right?

Jess: Well either you’re psychic or you were cheating. No one guesses that many numbers correctly.

In Pick the Lock, 2-4 players become master safe-crackers vying to see who can steal the most treasure. Players get a set of “thief” cards that are labeled 3-9. Then a vault is created from a deck of treasures. The vault gets a number of cards dependent on the number of players (ie. 2players = 5 treasures and 3 players =7). Once the vault has been sealed our dastardly thieves will take turns trying to guess the combination to the safe. To do this, the current player chooses one of their thief cards and places it face up. The number on the card determines the range of numbers the combination can use. The player to the right of the thief then chooses 3 cards from the combination cards that are equal or lower than the thief cards value and places them face-down. For example if Andrew played a 7, I could play a combination of 714. With the combination set, the thief must try to guess 1 of the 3 numbers in the combination. If they succeed, then they get the treasure and the thief  card they played gets discarded.

Jess: Now being thieves, we can’t be expected to play nice with each other. That’s why you can also try to steal from your neighboring thieves.

Andrew: Wait! That crown was in my vault! How did you get that? 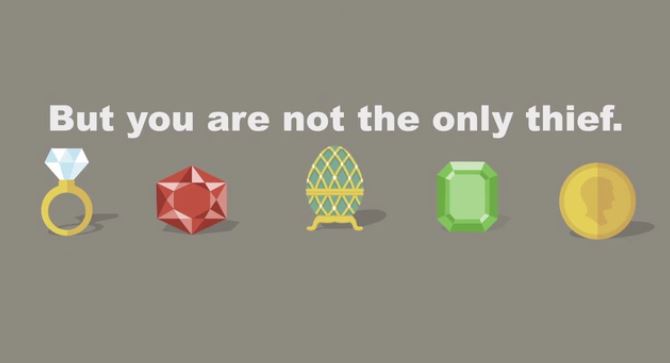 Stealing from another player is pretty similar to stealing from the vault. The thief will select a treasure to go after and choose their thief card. Where it differs is that the combination can only be one number long and the treasures you own may affect what combination you can select. If the thief guesses your combo, then, you guessed it, they steal your treasure.

Once everyone runs out of thief cards the game ends and whoever has the most treasures wins!

Pick The Lock is an extremely lightweight filler game, but the powers of the treasures manages to mix it up enough to make it fun. This is the kind of game I can see being a stocking-stuffer and if you want to get super fancy (and I mean super-duper fancy), Portal Dragon offers wooden Dog Might deck boxes for the game. It is kind of crazy to buy a $50 box for a $10 game, but man those boxes are pretty. 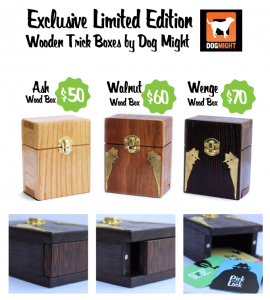 The Kickstarter won’t deliver in time for Christmas, but Portal Dragon is offering printable cards and gift cards that you can use to gift the game to your family, friends, or your secret Santa. Check out the Pick the Lock Kickstarter now as it only has a few hours left!