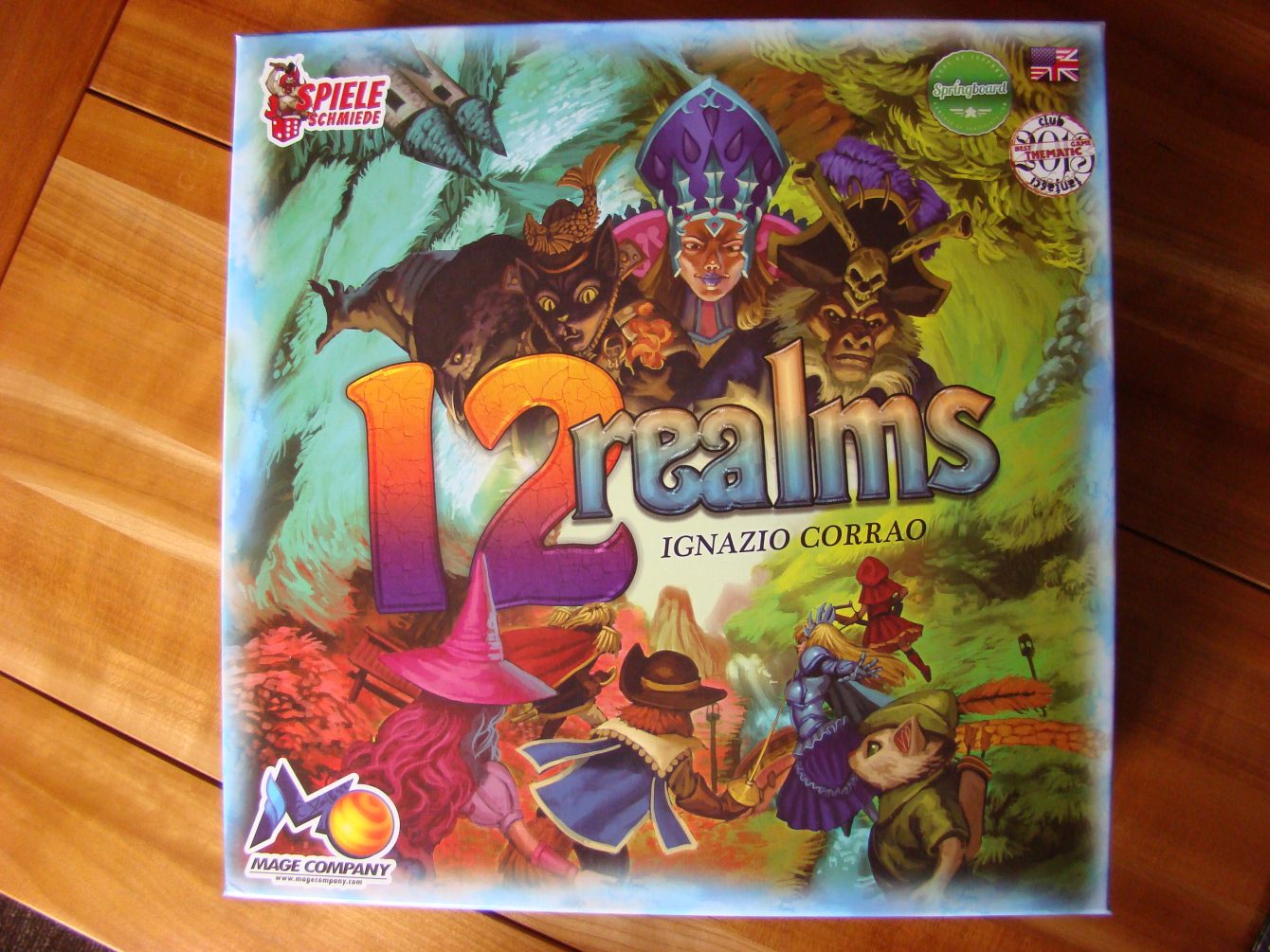 Chaos management.  That’s what all these Pandemic-style co-op games are about, right?  The threat splashes down on the board—cubes, tokens, minis, whatever.  It looks overwhelming, impossible—the Comanche horde riding toward you over the horizon, or dozens of Agent Smiths, or a small army of faceless ninjas pouring in through windows and dropping from the ceiling.  The chaos darkening the skies, the end nigh.  But then you, our hero, muster every resource, you gather every +1 in your arsenal—the camera panning up to your face, stone-like with grim determination—and you manage the hell out of that chaos.  You blow everything away in one dramatic move that leaves you standing in a wide radius of salted earth . . . and you rise. 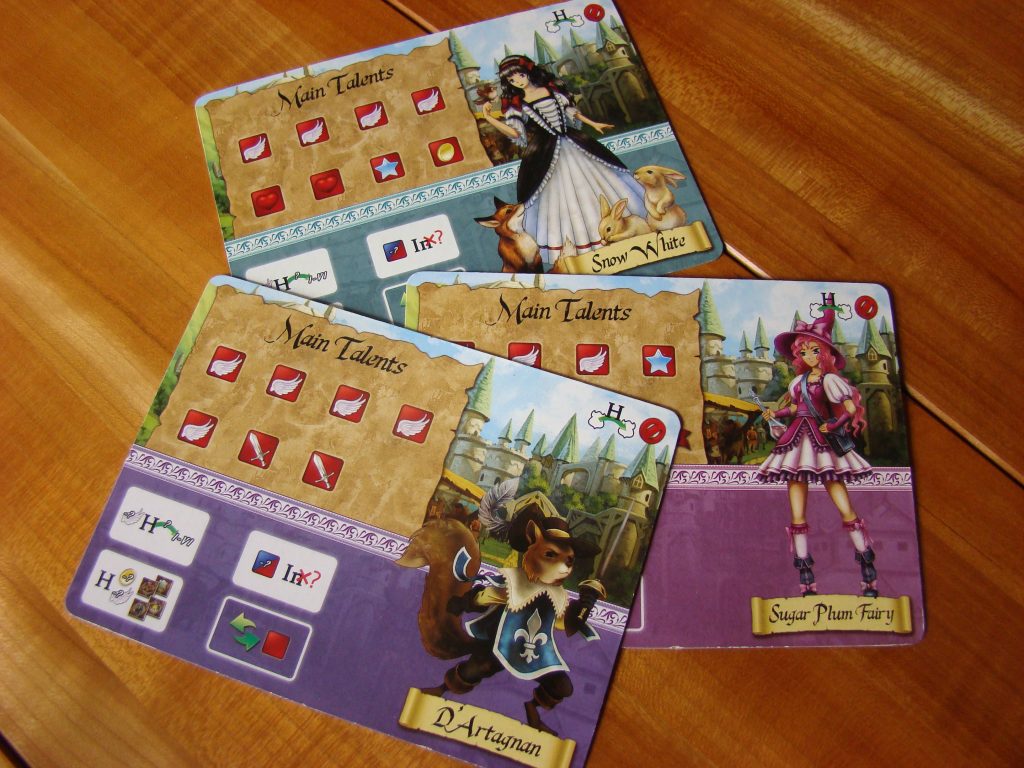 Well, after that, it doesn’t really matter whether you win the game or lose it, does it?  Because the fun of these games—Pandemic, Defenders of the Realm, Mechs vs. Minions, even Flashpoint—isn’t about the slow, strategic crawl toward victory, removing one cube at a time with all the reasonableness of a tax adjuster.  No, the fun of these games is in the big devastation—the one move that you’ll remember because, holy crap, that was impressive and so, so satisfying. 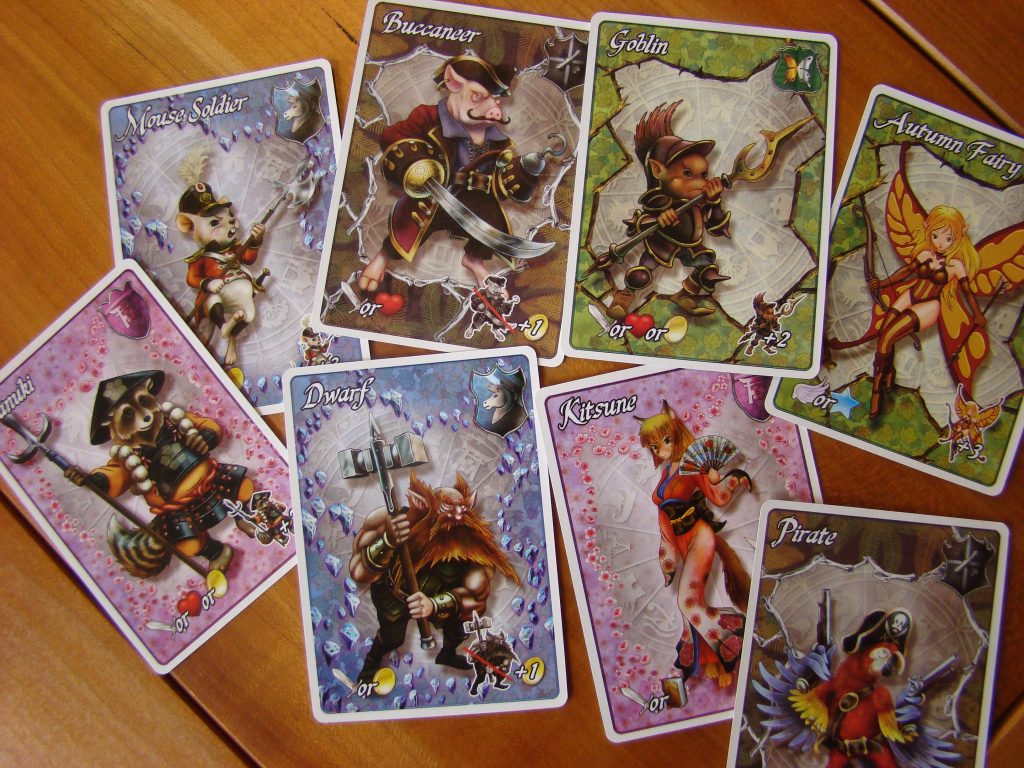 12 Realms has plenty of these moments.  You play a fairytale hero, boxing your own corner in one of the enchanted realms.  Each round, a new assortment of invaders will rain down from the sky—and each round you get that pleasant twinge of satisfaction at how well you’ve managed to kill off many of them, most of them, sometimes even all of them.  In fact, in this genre, 12 Realms features a fairly pared-down version of this dynamic.  Even though the invaders that remain alive push forward a timeline toward the arrival of a Dark Lord, most of them don’t move—they just sit there waiting for you to squash them. 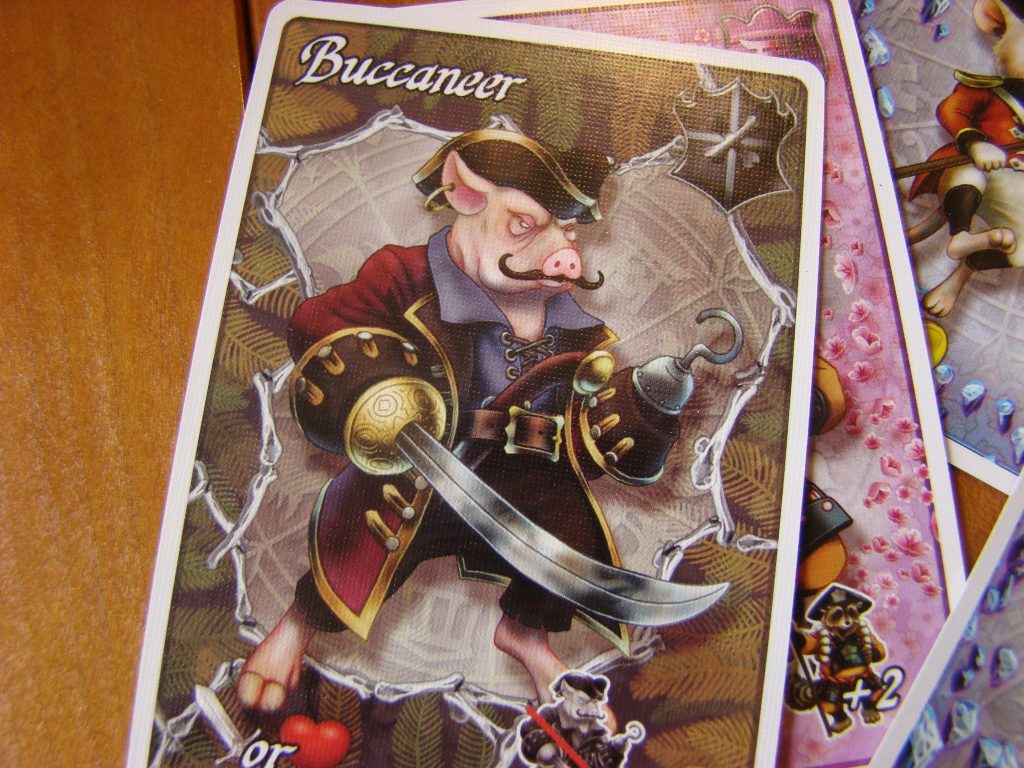 Your character has a certain number of “talents” (charm, combat, swiftness, magic, craft, gold) that can be spent each turn.  Some of the invaders can be fought with combat, some bribed away with gold, some convinced simply to walk away though your charming personality—some of the tougher ones require a combination of things.  You spend all the talents you can, because they refresh every turn—and when you can manage to take a break from fending off invaders, you can go shopping in town for cards that give you special abilities or simply more talents so that you have more to spend every round.  So, over the course of the game, you might collect piles of these talents, which means that you’ve built yourself one badass fairytale hero who will be even more likely to do some of that gleeful ultra-stomping.  It’s deliciously simple.  Like candy. 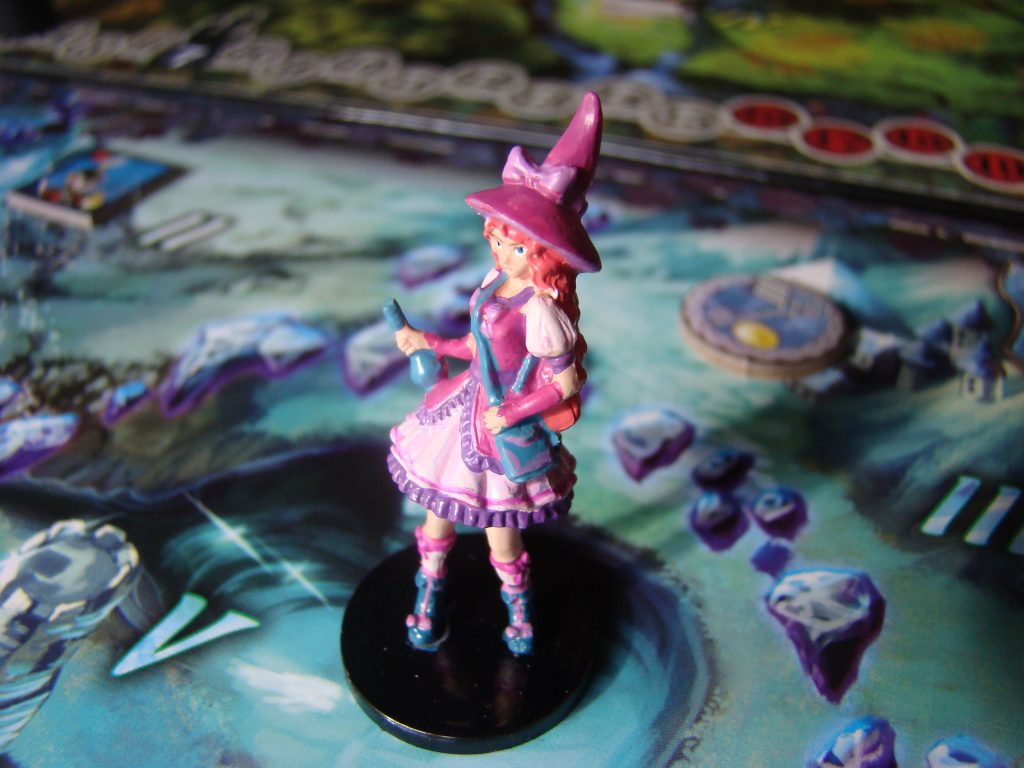 And the game even looks like candy—a confectioner’s cardboard dream.  The boards are lush and colorful.  The pile of talent tiles is like a bowl of jellybeans.  The hero minis are weirdly charming.  Some of them, like Snow White, recall the traditional Disney characters, while others, like Robin Hood—a mouse—are anthropomorphic animals.  (Is there a logic behind which is which? Not that I can tell.)  I splurged for the prepainted minis, so mine are even more confected.  The base set comes with four of the twelve titular realms: the Fairy Forest, a cherry blossom orchard, a Silver Kingdom, and a pirate island—each with its own board and its own thematically appropriate invaders, so you’ll be fighting Valkyries in the Silver Kingdom but wood sprites in the Fairy Forest. 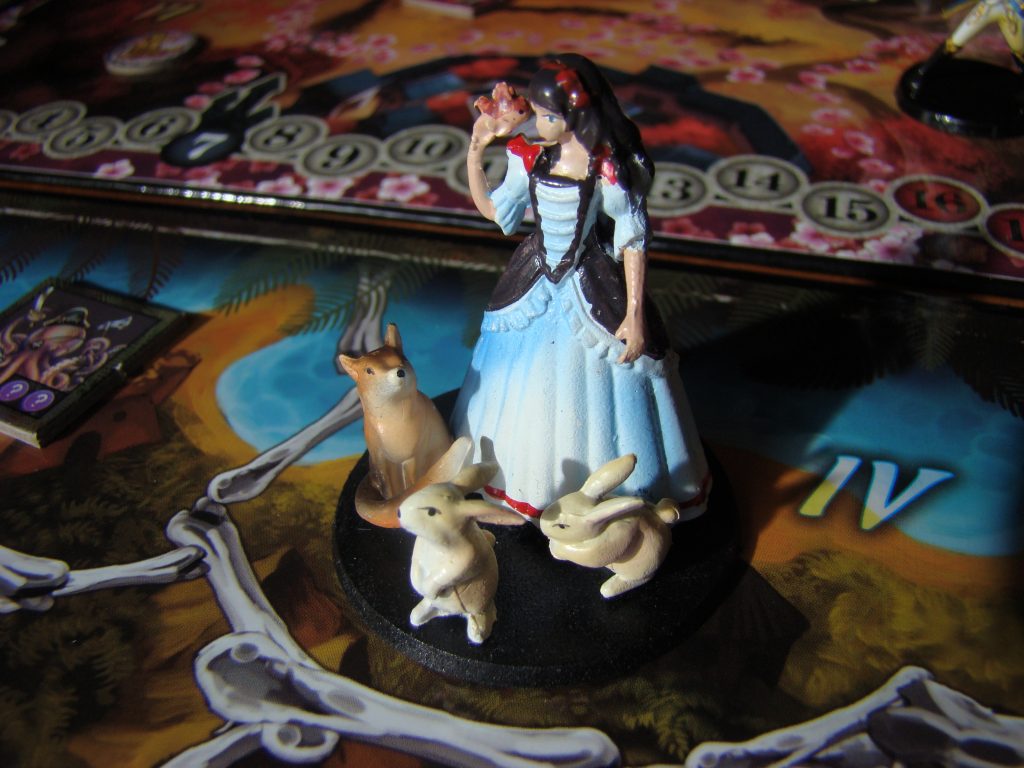 What 12 Realms has going for it is exactly what makes it unique in this genre: it is imminently configurable.  You can choose what hero you want to play, and each hero board has two sides so that you can choose which set of starting talents and abilities you’d like to try.  In each realm, you have a choice of Dark Lord (which big boss are you in the mood to fight today?).  And the game is completely modular, so you can fine tune its difficulty.  Let’s say you’re playing with three players.  If you want a normal game, you can play with three realms—but if you want an easier game, play with just two.  Or try four if you want a tougher challenge. 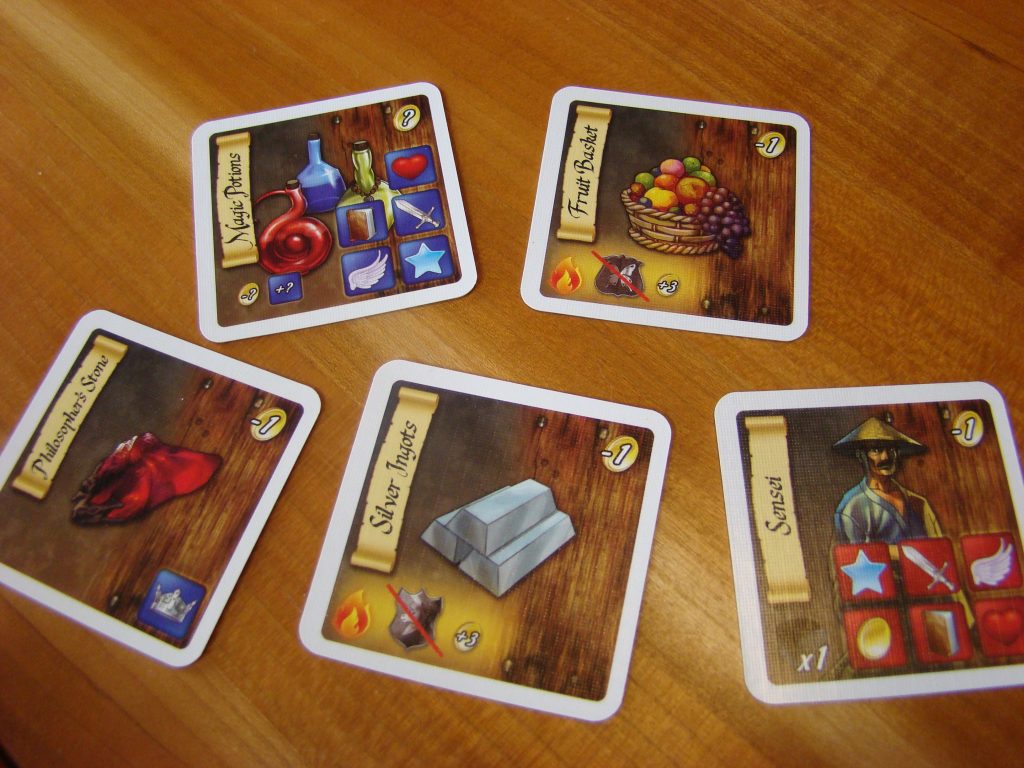 And there are lots of other variants and expansions that allow you to customize your own gameplay experience.  For me, this is the glory of 12 Realms.  (Time for a little shameful honesty: I shy away from brutal co-op games.  One of the reasons 12 Realms is on my shelf while Pandemic is not is that 12 Realms lets me turn the difficulty dial to EASY—and not necessarily by taking elements out of the game but rather by adding elements into it.) 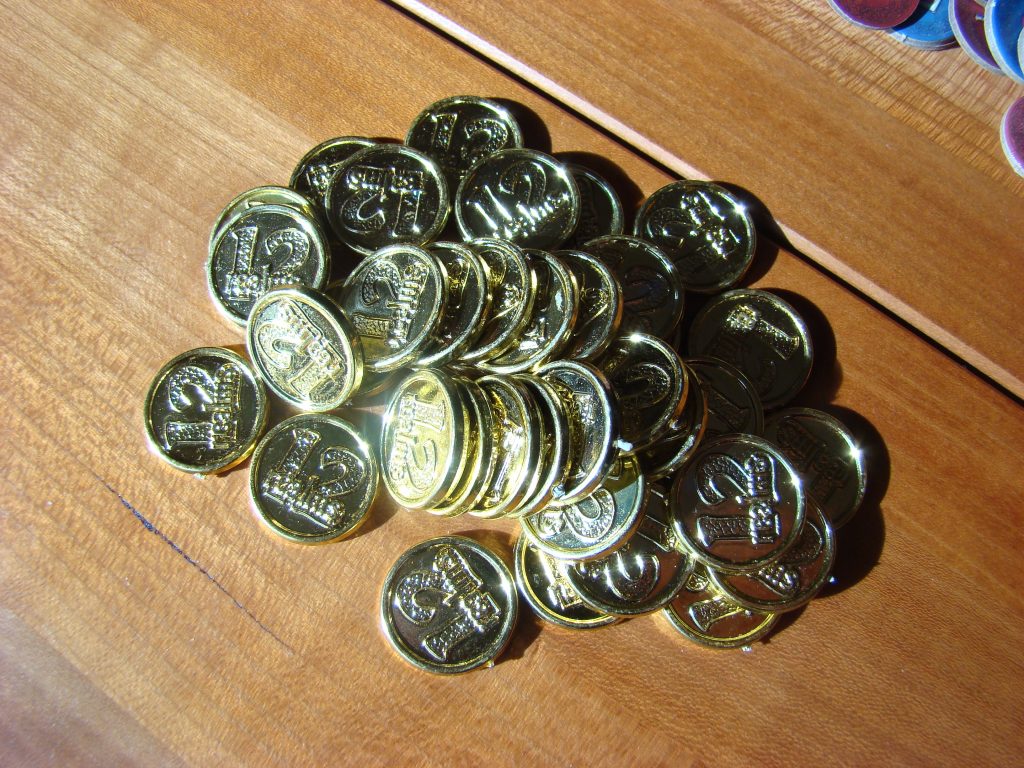 On the other hand, all is not perfect in these realms.  The game feels, in certain respects, undercooked.  Aesthetically, there’s a wide gap between the gorgeous hero minis and the invaders, which are just little squares of cardboard.  Also, the realm boards are luxuriously illustrated, but once you cover that colorful board with colorful cardboard invader tokens, everything becomes a fussy visual miasma.  Each individual piece of art is lovely, but together—well, after a while, you just wish for a simple white border somewhere so the images don’t all bleed together. 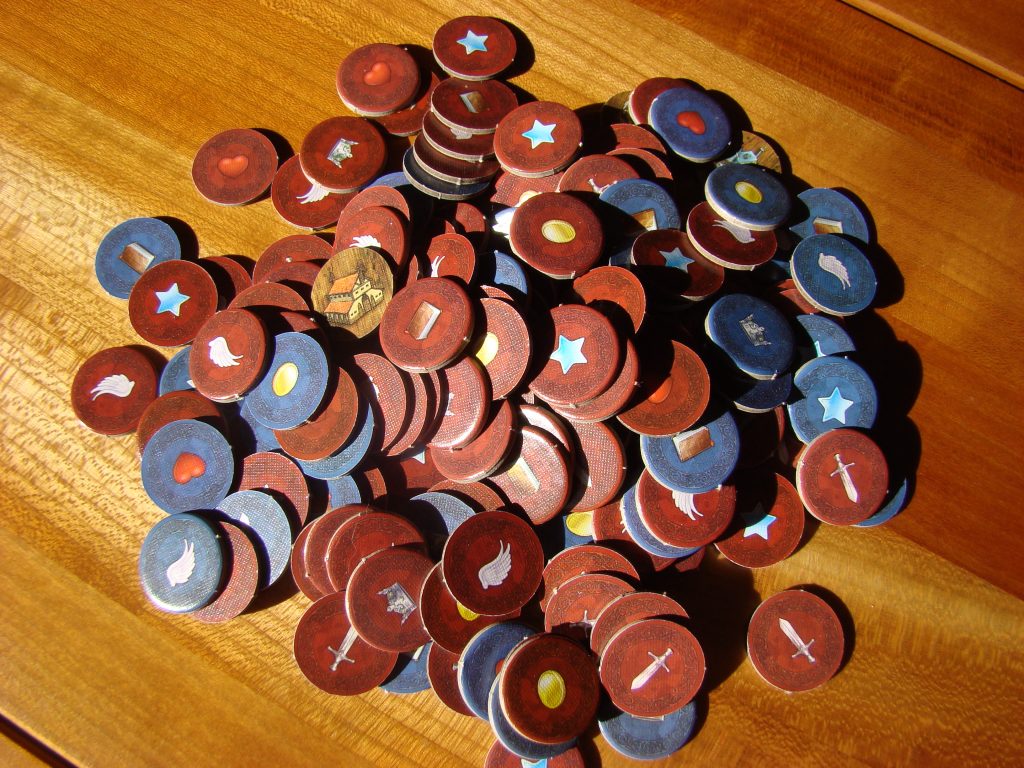 And then there’s the rulebook—which is bad, to be indelicate but accurate.  It’s one of those rulebooks that starts out by introducing general concepts, dynamics and characters long before it actually begins (on page 8) to explain what a game turn looks like.  But this game isn’t Mage Knight.  It’s not that hard to comprehend. 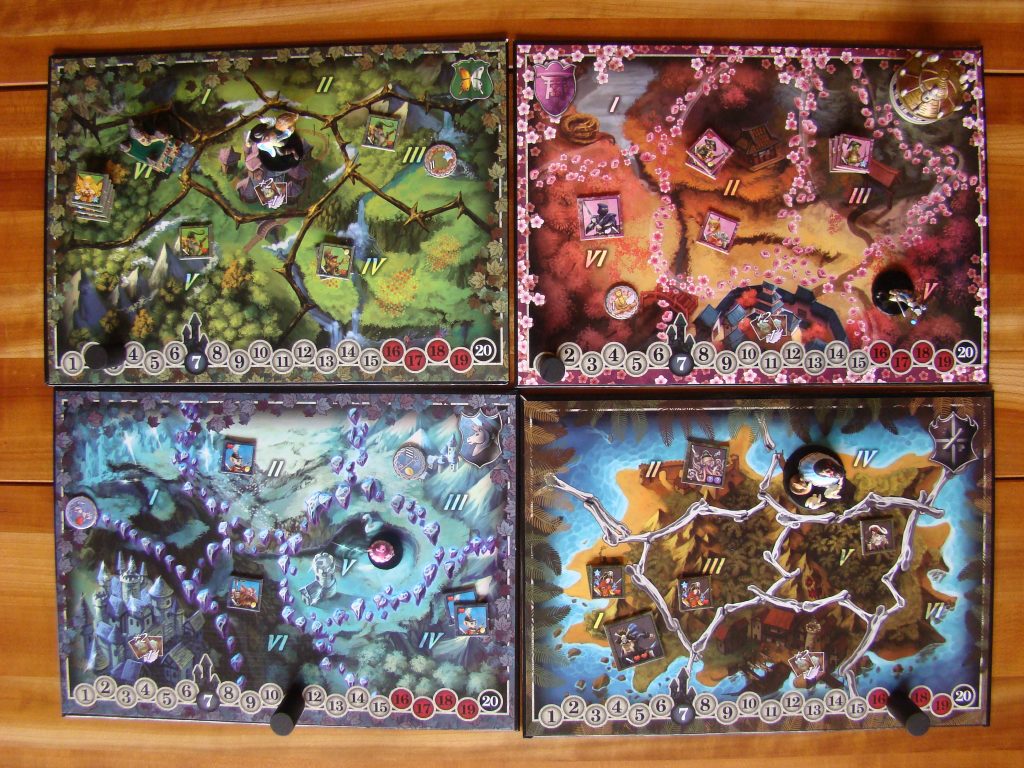 In fact, all the significant rules for playing the game can be found on three pages—buried in the middle of the manual.  So this relatively simple game is actually quite a chore to learn.  And, even worse, the rulebook leaves some basic and essential rules murky—so that at critical times in the game, you’re not sure if you’re playing it correctly. 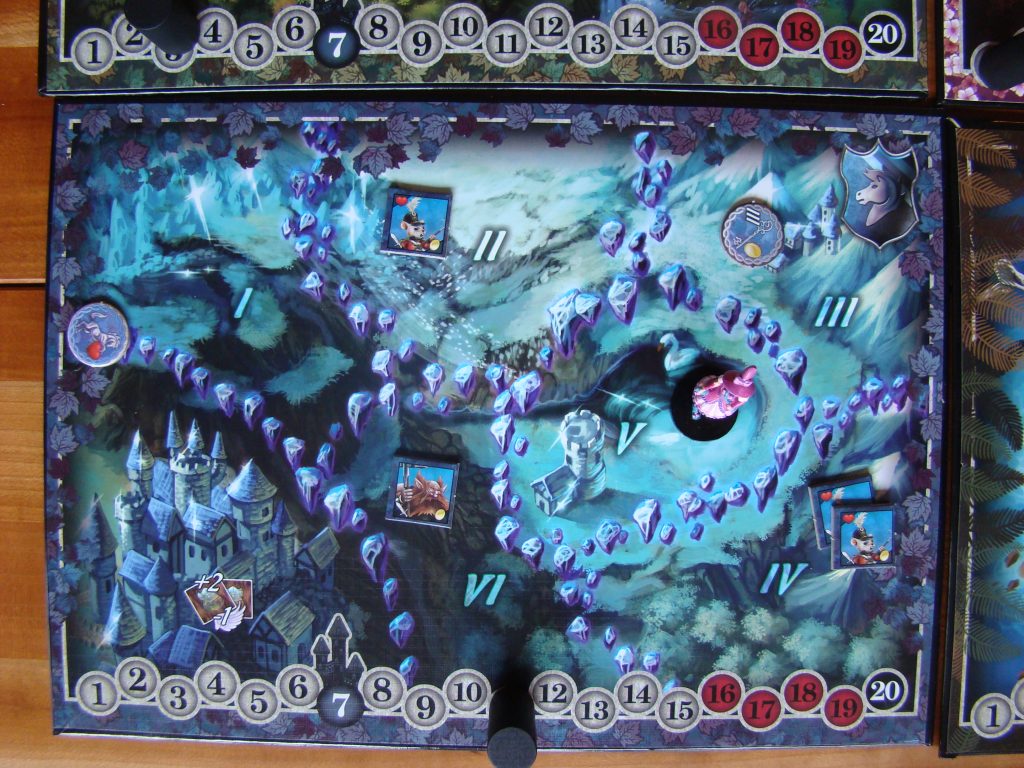 Case in point: In one of our sessions, we were humming along nicely through most of the game.  We were repelling invaders right and left, and we felt like we had all the chaos managed.  When one of the Dark Lords popped up, we confronted him with great confidence—and that’s when the game went off the rails.  Behold, the actual dialogue: 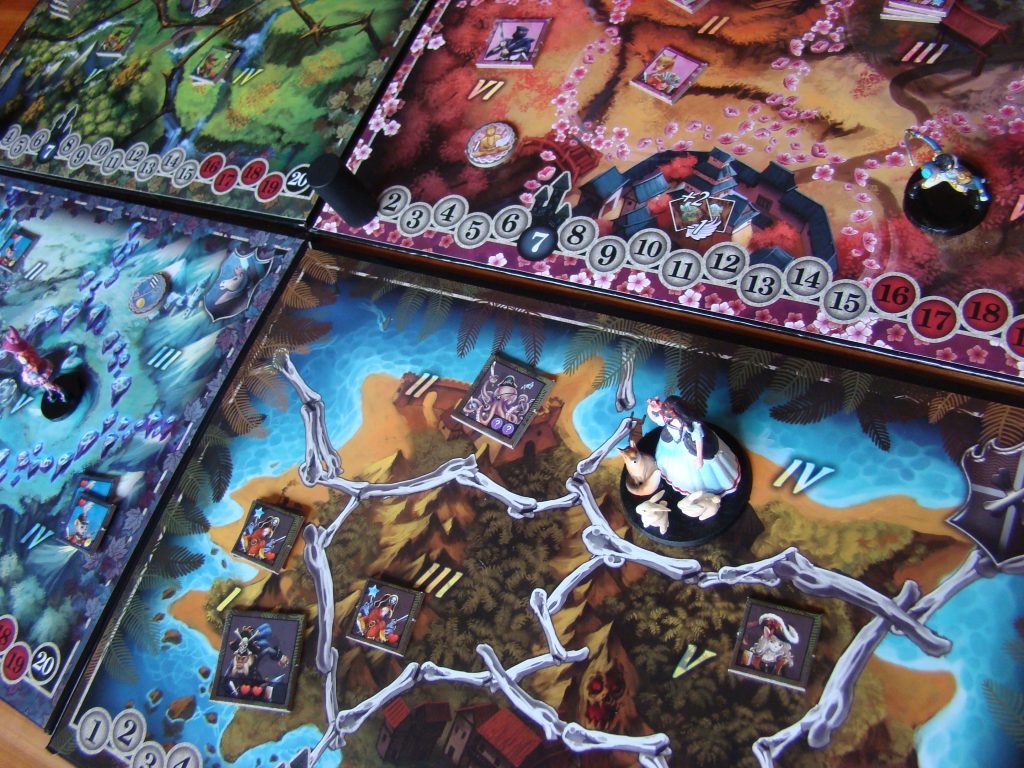 Andrew:  Because if I roll the die at the beginning of my turn, I might not be able to do anything else—and then we’re overrun by invaders and we lose.

Andrew:  But if I roll the die only when I confront the Dark Lord, then I might save that action until the very end of my turn so that if I lose my turn, it won’t be so bad.

Jess:  But that isn’t really losing your turn, is it? 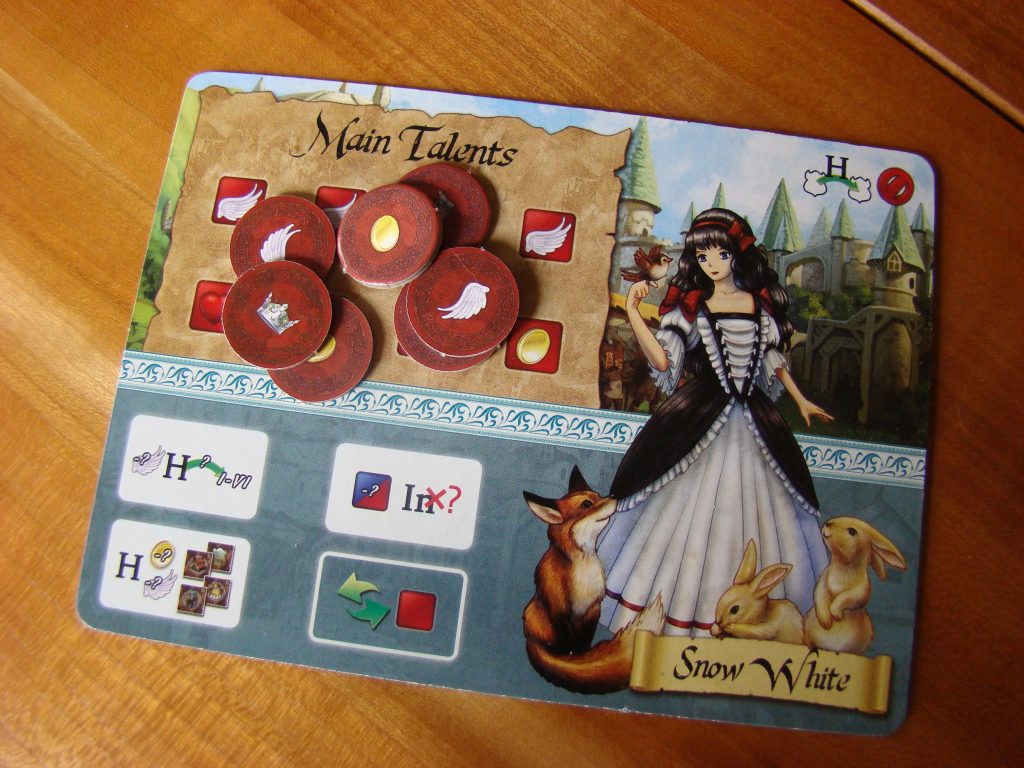 Jess:  So we’re in a situation where our entire game—all our strategy up to this point—comes down to a 50/50 roll of the dice.

Andrew:  That rulebook needs a revision.

And that’s no joke.  In rulebook version 2.2, we encountered an endgame rule so poorly written that it made us lose the game instantly—we think.  Sure, there’s probably a thread on this rule on BGG, but, honestly, between the roll-a-die-and-lose-a-turn mechanism and the sloppiness of the rulebook, we were too soured on the game at that point to embark on a BGG rule quest.

Andrew:  Which is a damn shame, really, because I did see the candy-like goodness that 12 Realms ensnared you with initially.  I won’t call it a bad game, just one that gets in its own way sometimes.

Josh:  Exactly.  And that leaves 12 Realms in an awkward place for me.  There’s much to love about this birthday cake of a game—and I like having it on my shelf.  And, to be honest, I’ve Kickstarted multiple expansions, some of which are still in production.  It has some weaknesses, but most of them are in the rules themselves – once you have a solid grasp of the game, there is still plenty to enjoy.

Jess:  I know what you mean.  I had a good time with it, too, despite its imperfections.  And its modular nature is really something unique and awesome!

For its difficulty (light to heavy, entirely at your discretion) and its presentation, REAL has plenty of appeal and longevity.  If you can forgive its rulebook and its uneven (but overall excellent) visual presentation, then there is plenty to recommend.  Will it be your favorite cooperative game?  Well, that’s all down to theme, and for me it manages to remain in a space most other, more hardcore games have fallen by the wayside.

One thought on “12 Realms Review”