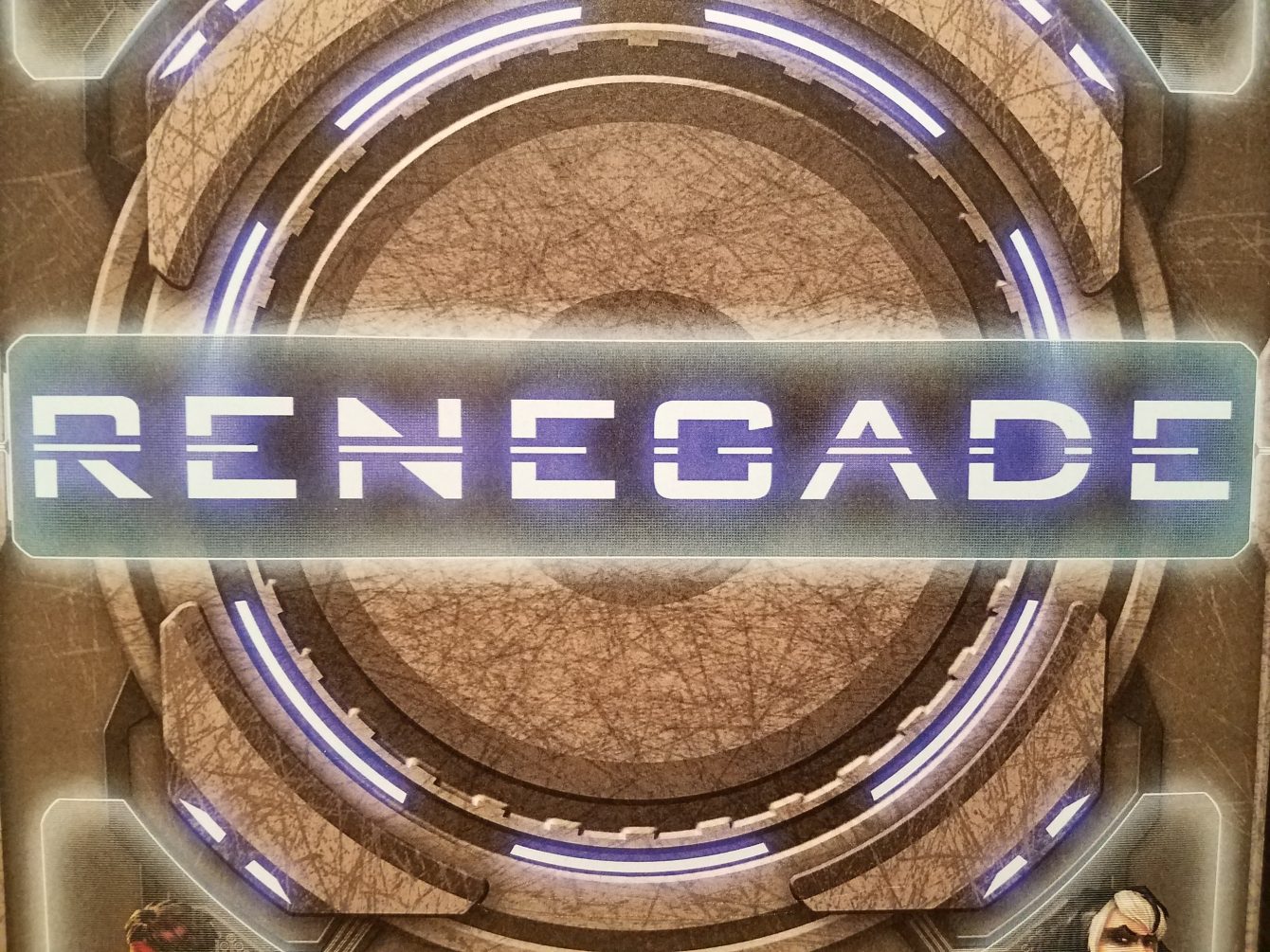 Renegade has a few really interesting aspects to it - some neat mechanics, a smart alternate play mode, and interesting variety to its missions.  However, a flawed rulebook and what feels like complexity for complexity's sake drag the game down quite a bit.

Renegade, designed by Richard Wilkins and going up on Kickstarter soon from Victory Point Games, is a cooperative deckbuilder set in a cyberpunk dystopia, where humanity finds itself under the predictably disastrous control of a supercomputer and only the Renegades, cyberhacker extraordinaires, have the hardware to hack the system and save us all.

Jess:  Or something.  I zoned out about 10 pages into the rules, to be honest.

Andrew:  Yeah.  Look, I’m going to say it up front.  Our experience with Renegade wasn’t the best, and a lot of it comes down to those rules.  But let’s not get too far ahead of ourselves just yet – let’s take a look at the game in greater detail.

In Renegade, the titular Renegades will work together to take down a series of increasingly-powerful Super Massive Computers, or SMCs, each of which has slightly different setup rules, as well as per-turn powers and defenses.  The board is composed of modular server tiles with six partitions each, and the players’ Avatars will move around these systems, uploading various contaminants, executing commands, and subverting the sparks, guardians, and firewalls that the SMC throw into their way.

Andrew:  Right from the beginning, it should be clear that Renegade uses a lot of jargon to try and immerse the player in the theme of the game; so much so, in fact, that even for the purposes of this preview, I’m faced with the choice of summarizing gameplay using all its terminology, or to do what we ended up doing and simply dropping the thematic language entirely for the sake of clarity.

Jess:  By the Matrix, please drop the fake hacker stuff.  It’ll cut the rules summary by 60%.

In a nutshell, Renegade works like this – each time you play, you will square off against one boss computer that the players will work together to destroy.  The SMC chosen essentially sets the difficulty for the game, and will spawn defenses in response to your intrusion, destroying your efforts to subvert its systems and trying to purge you off the board. 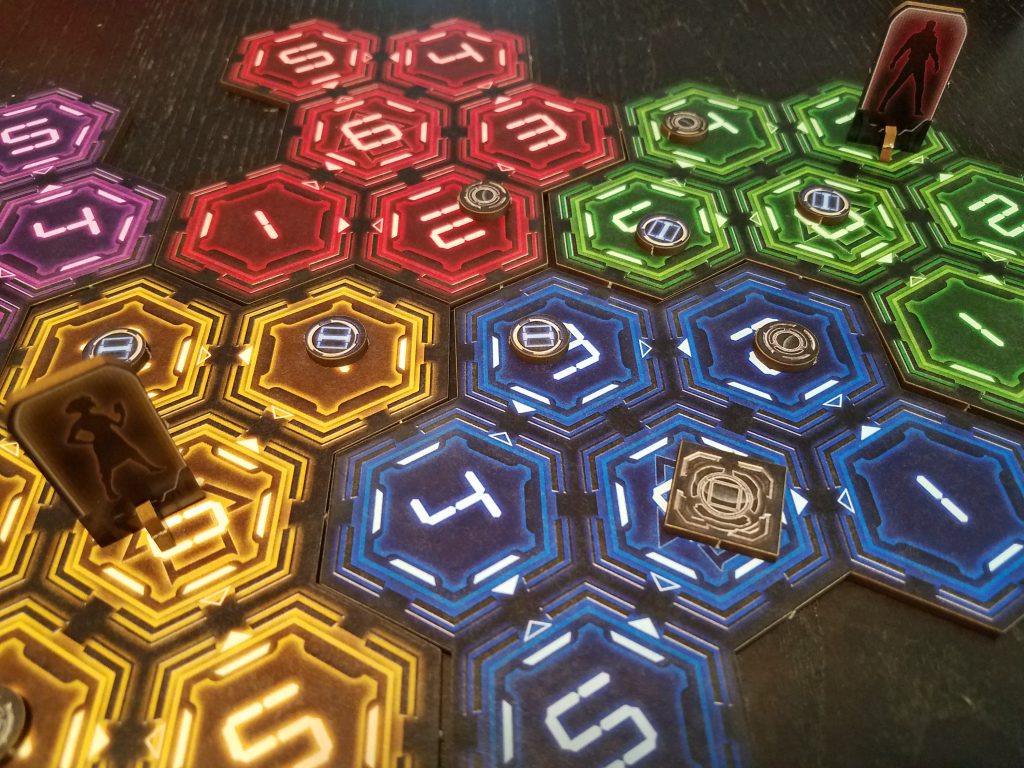 Randomly, you will set up 3 sequential challenges (called Countermeasures), one for each round of play.  These countermeasures have success and fail criteria, usually relating to the players having set up certain board conditions before the round is over. 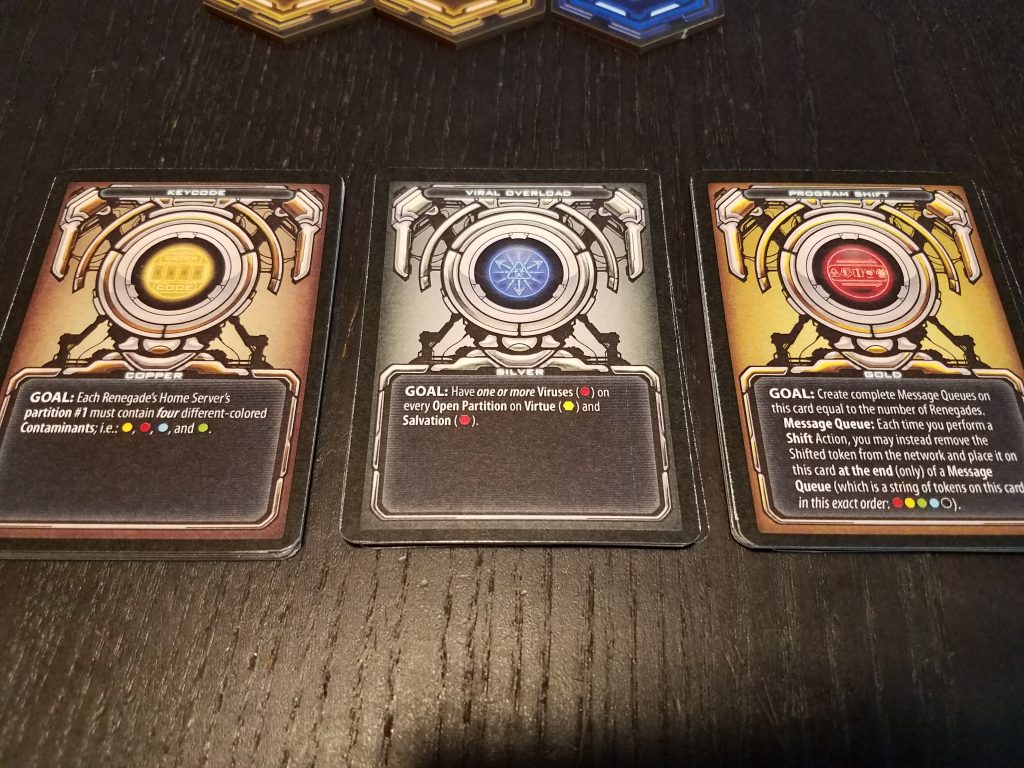 In each of the 3 rounds, players will run through their decks of cards, trying to meet the success criteria of that rounds’ challenge (because the SMC will do some very nasty things to the board if they fail…and sometimes even when they succeed).  They can upgrade the cards in their deck, as well as place tokens on the board to fight or convert enemy pieces, move more easily, and even take actions at range.

Each action costs a different color of ‘Command’ (generated by players’ cards):

Once all players have taken 3 turns-worth of actions, the SMC gets to hit back, using its pieces to destroy what the players have built.  But if you can manage to make it to the end of the third round without losing, you win!

Jess:  Wow, when you take the needlessly complicated language out of it, that sounds pretty reasonable, actually.

Andrew:  It does, but remember, we’re downplaying all the fussy mechanical complexities to each of these actions.  But yeah, the iconography is better than the language, by far.

At the core of Renegade’s gameplay is  a unique take on deckbuilding.  Each renegade begins their game with exactly 15 Command cards – these cards provide the action points which will power the player’s various actions.  Players get 3 turns each per round, drawing 5 cards each time, so a player will run through their entire command deck each round of the game.

That also means that as players acquire upgraded cards from the Advanced Command Cards (purchased from the Hack Shack, I mean, obviously), they will also simultaneously lose existing cards, so that this 15 card Command deck is always maintained.

Jess:  I thought that aspect of Renegade was really interesting, actually.  In most every deckbuilder I’ve played, an important part of managing your deck is both adding better cards as well as getting rid of less-desirable starter cards.  Because you always have exactly 15 cards in your deck, Renegade cleverly bakes this strategic decision into every purchase – you can’t just keep adding new cards to your deck without losing some in the process.  I thought that was really neat!

Each of the three rounds is played over the course of several phases.  First, the Intel phase accounts for that game’s SMC unique properties. Then players enter the Command phase, where renegades will take their actions trying to overcome that round’s countermeasure card.  Finally, after all the renegades have exhausted their Command decks, the SMC acts in the Countermeasures phase, where AI Sparks will attempt to destroy renegade contaminants and delete installations.

Andrew:  I need to interrupt myself here.  Every time I type a paragraph, I read it over and realize that with every bit of jargon I reference, the explanation gets less and less understandable.  Basically, the players will be adding tokens to the board which will help them take their actions more easily or powerfully, and the board will try to destroy them.  There, much better.

Jess:  It’s the absolute first problem we had with Renegade, and it was a persistent issue throughout our testing of it.  More than anything, the language the game uses to describe itself is unnecessarily complex and adds nothing of substance to the experience.  Honestly, after approximately 90 seconds of gameplay, ‘uplinks’, ‘data nodes’, ‘replicants’, and ‘propagators’ simply became ‘green dots’, ‘blue dots’, ‘yellow dots’, and ‘red squares’, and our experience was all the better for it.

Andrew:  I totally understand that they wanted the theme to come through, but there is something so profoundly ineffective about this approach to doing so – the language the rules insist on using (both in the leaning on hacker jargon and in its cutesy approach) only obfuscates the actual, you know, rules, and does nothing to actually make the game feel more thematically rich. 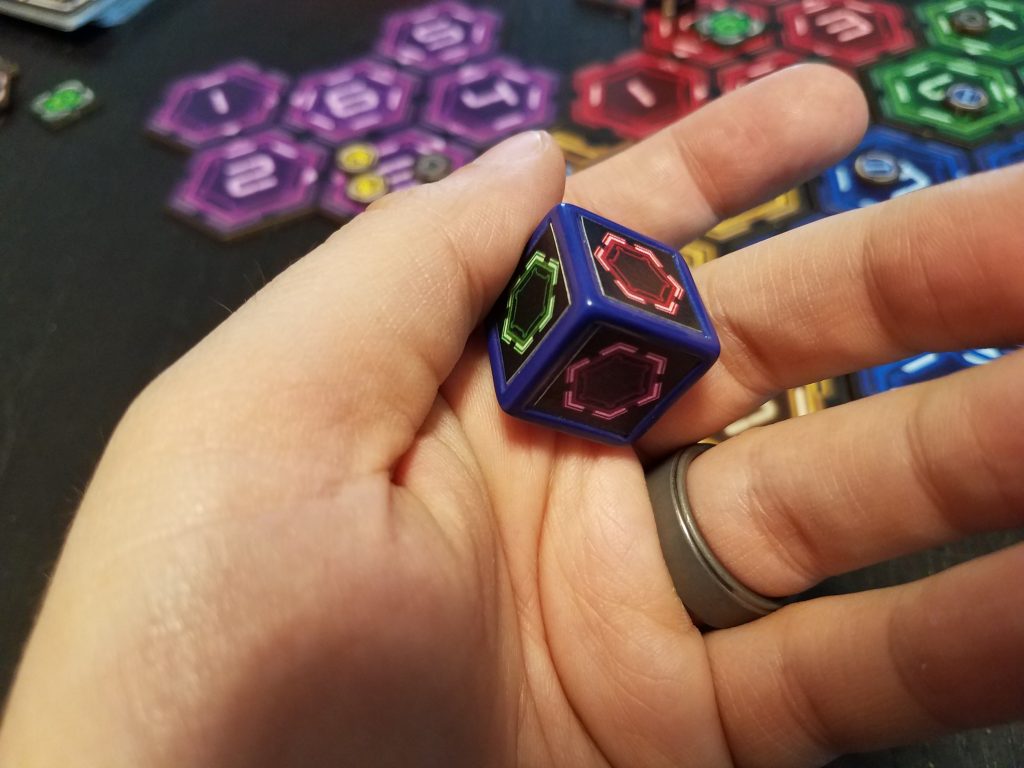 This may seem really petulant, to harp on the language of the rules and the game for this long, but it’s no exaggeration to say that it truly affected our enjoyment of the experience of playing Renegade.  Even the flavor text on the characters is bad – the guys are too-cool-for-school badassess who take drugs and are intimidatingly hardcore, and the girls are either a ‘poser with a  guardian angel who isn’t taken seriously by her other hacker friends’ or ‘a straight-up wirehead that everyone calls the Ballerina’.

Jess:  I mean, the big bad is even named ‘Mother’.  It’s like a high schooler’s game of Shadowrun.

But only if you let it be that way – all the terminology and hexed-up wirehead hack-shack nonsense only really exists in the rules (and a tiny bit of flavor text on the character sheets) – Renegade itself is a fairly abstract game once the rules-language is stripped away.

And speaking of which, let’s stop talking about the rules altogether and focus on the game.  Unsurprisingly, there were some really good ideas here, as well as some less-successful ones.  What worked was the unique take on deckbuilding, as well as the pacing of each round – by working through your entire deck before the SMC has a chance to take its actions, players can be really strategic in how they take their turns, working together to overcome that round’s (often very challenging) Countermeasure conditions.

Andrew:  One of the things that really helped us was when we played with a variant that eliminated turn order – players simply agreed who would do what when, and that lead to even better teamwork and synergy – the best things about cooperative gameplay.

On the downside, though, was the fact that, with only three player turns each round, it was entirely possible to draw a handful of command cards which let you accomplish nothing toward the round objective.  And since it is fairly tough to add player pieces to the board in the first place, if your cards get distributed too thinly (for example, not enough yellow command to add yellow tokens, when that is the round’s objective), you may go through an entire third of the game, relatively unable to make progress and then get punished for not doing so.

Jess:  The game-end conditions didn’t do anything for us, either.  On the one hand, if you are ever forced to add a Spark (an enemy token) to the board and there are none left in the supply, the game abruptly ends with a loss.  But as veteran Pandemic players, that didn’t bug us much.  But what did was the way the game simply ended after the third round.  There was no real climax, no building of tension, and certainly no payoff – if you don’t lose, you win, and that’s that.

Unfortunately, we didn’t really enjoy our time with Renegade.  It’s a game with some good ideas and there is no doubt at all in our minds that some people will absolutely adore its theme and enjoy its mechanics.  However, this one simply isn’t for us.  Will it be more your thing?  Once the Kickstarter officially starts, we will provide links and we encourage you to check it out for yourself!