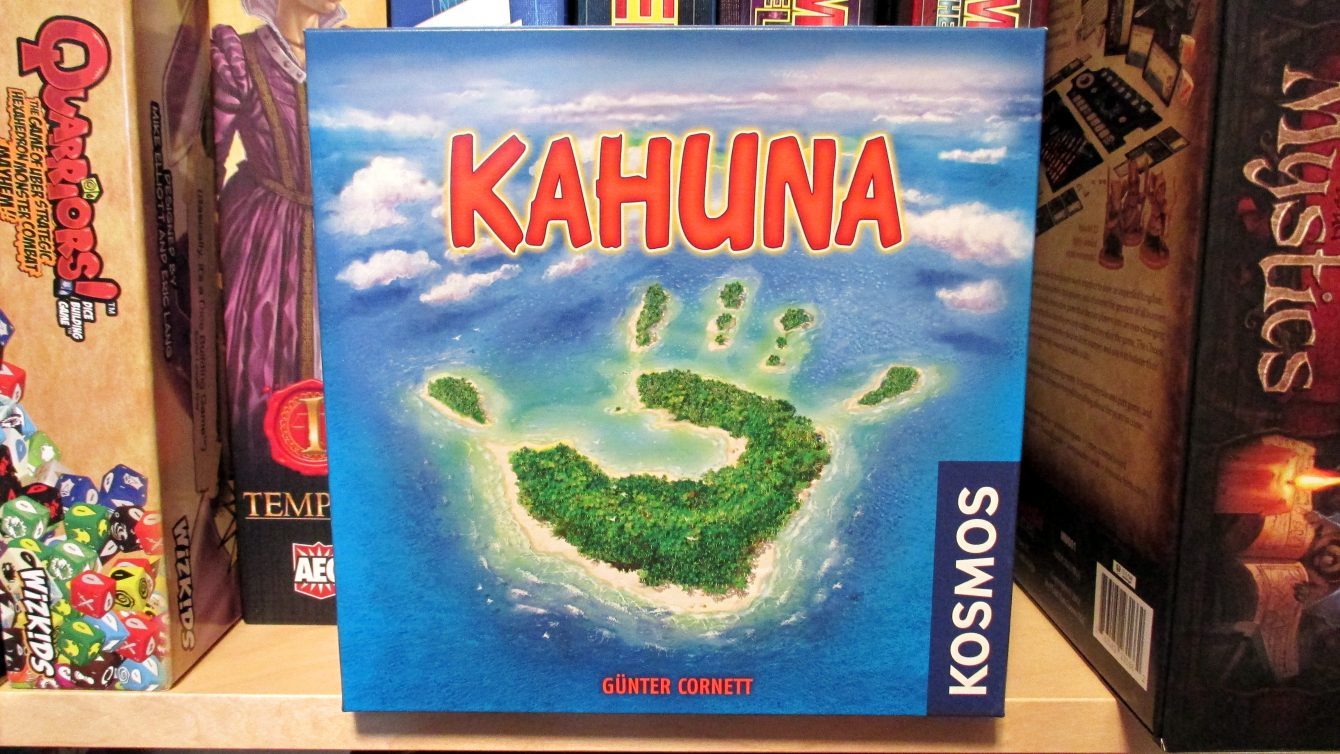 Andrew:  This week, Gameosity travels to beautiful tropical islands, where powerful shaman channel the ancient spirits of the land in order to-

Andrew:  Haha, no no, even better!  We’re going to play some board games!

Kahuna is a dedicated 2-player area control game, recently re-released by Thames & Kosmos.  In it, players take on the role of powerful shaman, or Kahuna, vying for dominance over an island chain.  In all fairness, the theme is completely pasted on – this is an abstract area-control game, plain and simple.  Kahuna could just as easily be about star-empires controlling planets or viruses infecting cells (which, now that I think about it, would be a wicked re-skin).  However, despite its themeless nature, it is still a good time.

Jess:  Swimming is a good time too, you know.

Andrew:  …Yes, anyway, on each turn, players will play cards, adding (their own) or removing (their opponent’s) ‘bridges’ between the named islands.  When one player controls the majority of connections to a particular island, they then gain control of it.  But in gaining control of an island, they also remove all of their opponent’s bridges which had been connected to that island, possibly resulting in them having fewer than a majority control over another island, resulting in a cascade of lost control points.

This tug of war keeps going, with each player gunning for the best board position, through three scoring rounds (when the draw deck runs out) – only then is majority control, and therefore points, totaled.  So even if your opponent manages to get the upper hand, you have until the deck runs out to bounce back.  After the third time the deck empties, a final scoring round is triggered and a winner is declared!

Andrew: Sometimes when I am playing an area control game, it can be really frustrating to have worked really hard to establish control only to have it cut out from under you.  However, Kahuna is light and fast enough that these exchanges feel like a natural part of the game.  At no point, even when I was nearly wiped off the map, did I feel like I couldn’t make a comeback.

Jess: Yeah!  And that means that you’re always engaged, no matter how far behind you may feel, which is really important in a 2-player game.  And since the scoring isn’t just about the endgame, there are several chances for point-swings.

Andrew: Exactly.  Kahuna is a solid little game.  Its relatively short playtime balances well against it’s active tug-of-war nature, never overstaying its welcome nor being to shallow for what it is.

We did have some nit-picks, but they are quite minor.  It’s a pet-peeve of mine when a game tells me to ‘keep score’ but gives me no mechanism with which to do so.  Scores in Kahuna tend to be single-digit at best, so even 10 scoring tokens would have sufficed (we substituted some coins I keep around for just such an occasion).  Also, as I said, the theme is practically non-existent, but that doesn’t detract from the gameplay at all.

Jess: Maybe it’s not exactly the same as an island vacation, but if you are in the market for a solid-but-light 2-player game, definitely give Kahuna a try!

(A big mahalo to the folks at Thames & Kosmos, who sent us a copy of Kahuna for review!)