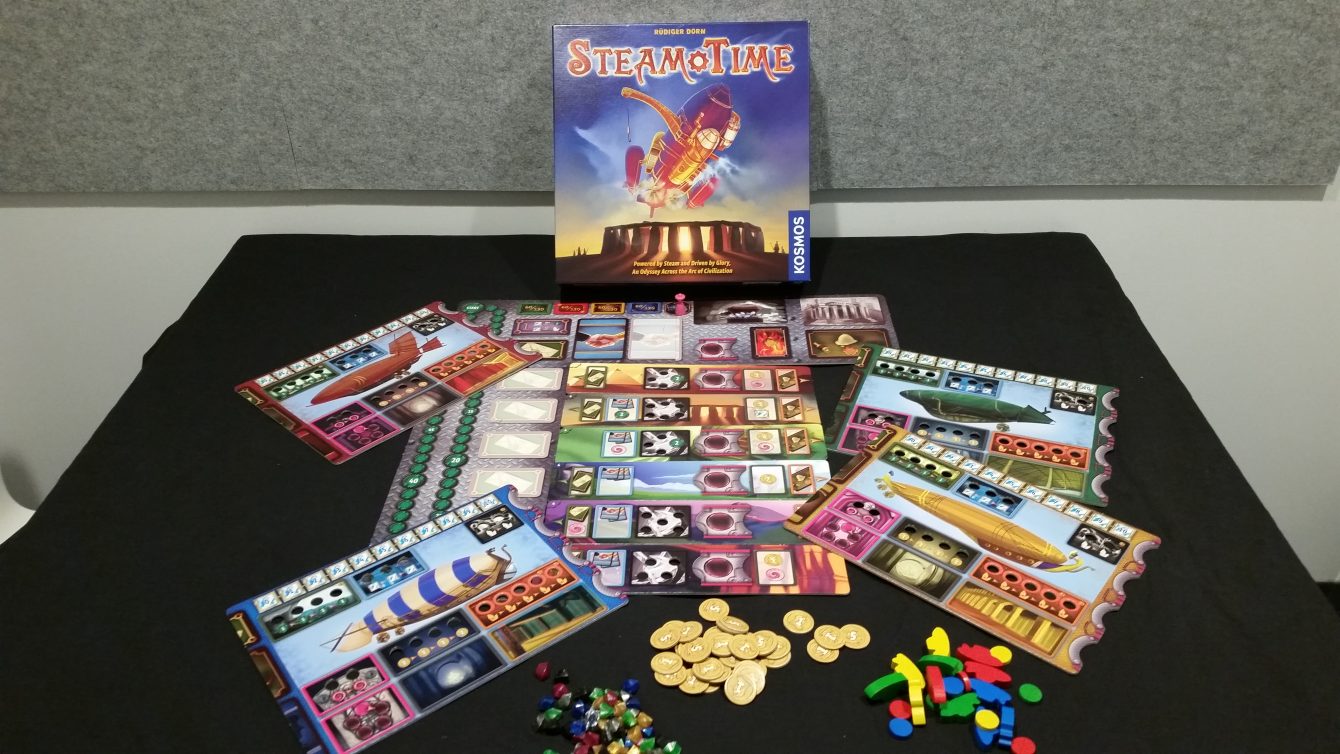 Steam Time, delivered to us by Thames & Kosmos (Kahuna, Tumult Royale) is a worker placement/engine building hybrid for 2-4 players.  It is designed by Rudiger Dorn, who has to his credit some of my favorite game of all time; Istanbul, Las Vegas, and the perfect-for-date-night Dragon Heart.  Set up as a steampunk time-traveling adventure, does Steam Time live up to its creator’s standard?  And more importantly, is this decidedly Euro-style game any fun?

Andrew:  The short answer is yes, absolutely; Steam Time could also have been titled Fun Time.

Andrew:  Oh, I’ll get to the theme issue in a sec, but let’s talk about the game first.

In Steam Time, players will send their crystal-powered time-dirigibles on a quest through history at the behest of T.I.M.E (the Temporal Institute for Monument Exploration, obviously).  The goal of these expeditions is to gather information on the nature of historical monuments and to meet important people from history, thereby gaining esteem with your fellow T.I.M.E. captains.  At the end of 5 ventures through the ever-changing streams of history (rounds), the player who has gained the most esteem (get it? e-Steam? eh?) is declared the winner of time or something!

Each round, players will send their ships to one of the available action spaces on the board.  These spaces allow players to encounter historical figures, go on expeditions, improve their airships, and gather the all-important crystals which serve as both power source and currency in the game.  One of the unique features of Steam Time’s worker placement mechanic is that the board, assembled from different Monument tiles which are laid out randomly, represents the flow of time back-to-forward.  And despite the fact that we are all in time machines, we can only travel forward in time, from the lowest part of the board to the top.

That means that if you, really want to occupy a space in the middle of the board, you will have to either accept that once you place a ship there, you won’t be able to place in any of the spaces below it, or you will have to bide your time lower down in the time stream, and hope that no one decides to jump up and snag that spot you wanted.

Andrew:  The time stream mechanism is an extremely smart way of adding tension to the game.  It means that not only do we have to figure out our optimal strategy for how to place our ships (workers), but we need to do it in a smart order, lest we lock ourselves out of valuable placements by jumping ahead too early.  And between rounds, the eras shift, meaning that the distribution of action spaces will change relative to each other over the course of the game.  Lots of strategy!

Every action space in Steam Time allows players to do something different in their quest for Esteem.  The actions are:

However, these are just the basic Actions.  Each one is linked to one of the engines on your ship, and by having crystals socketed into the appropriate engine, you can get a substantial bump on the effectiveness of that action.  For example, if your Midas-Machine looks like the one pictured below, socketed to level 3 (clear crystals are wild and more difficult to get), then every time you take the ‘Gold’ action, you would receive 6 extra gold.

Jess:  What is really neat about Steam Time is that the engine-building takes place on two levels.  The first is that with each crystal obtained, you are making it more profitable to take certain actions.  The second level are the upgrade tiles that you can purchase for your airship, which give you both immediate and per-round income.  The more you build your engine, the more your engine can be built up!

Of course, in order to accomplish things like build upgrades and complete expeditions, you will often need to pay in crystals – the very same ones you are using to power your engine!  So there is a constant ebb and flow of crystals in your system, making the game feel dynamic and adding a depth of strategy to your choices.

Below is a picture that shows how the different systems play off each other.  In order to complete the expedition card and earn its reward, the player will have to spend a black, pink, grey, and green crystal (as shown on the Effort card for the round, on the left).  If they can do that, they will earn the first 4 rewards shown on the card, because their Analytic Engine is up to level 4.  If they had managed to have one more crystal in that engine when they completed the expedition, they would have earned the 5th place reward, too.

Steam Time is, simply, a game about building a victory point engine.  However, with a wide variety of interlocking systems, it never feels rote or samey.  In fact, since the game is a bit of a point salad, it is easy to feel like any strategy might work, as well as encouraged to change strategies mid-stream in the event that someone grabs a spot you really wanted.  It’s all somehow both very accessible and thought provoking, a great combination for a light-to-medium weight game.

Like so many great engine-building games, Steam Time actually feels just barely too short – by the 5th round, your airship will have some nice upgrades and you’ll feel like you can do some serious damage, but the game will also be over.  However, because of the fact that your engine gets upgraded each time you take on a crystal, you will actually feel like you’ve gotten lots of bonuses all along the way, which is lots of fun.

Andrew:  Look, what we have here is an abstract engine building game wearing some very attractive theme as window dressing.  But what I want to stress is that Steam Time may have little thematic penetration, but if you like victory point engines as much as we do, the gameplay is top notch.  And man, give Rudiger Dorn some plastic gems and he can’t be beat!

Jess:  Yeah, I love Steam Time!  The design is really nice, the components are really high quality. and there is something about the gameplay that feels really positive – you’re always doing something productive, so it never feels like you’re wasting time (hah!).

Steam Time comes with two in-box modules, either of which (or both) can be added to the base game.  The first module, Sabotage, gives each player a token that they are allowed to place on a single Action space each round.  Players who want to occupy that spot must discard a clear crystal before they can do so for each saboteur token on that space.  The second module, the Specialists, gives each player a small deck of assistants.  Only one can be in play at a time, but each one gives some benefit or discount on actions taken.  When you choose to use a new specialist, the old one is lost for the rest of the game.

Andrew:  Of the two, we think that Sabotage is far less interesting, despite the fact that it adds a little bit of take-that strategy.  Generally, games of Steam Time feel tight enough, without having to worry that the space you really need is going to be partially blocked by another player’s token.  But the Specialist module is awesome, introducing little bonuses that help you form (and change) strategies throughout the game.

(Thanks to Thames & Kosmos for providing us a copy of Steam Time for review.  If we could go back in time and buy it for ourselves we would, because we think it’s great!)